I've often wondered about the Western, as a genre. Does it have to be made in the West to actually be a Western? Likewise, I've often heard it said, "the Western is dead." Yet these kinds of films continue to be made well into the present, set in places far removed from the West as it supposedly existed in the United States. The fact of the matter is, the Western is a folktale, a legend; it never quite existed in reality and thrives in the hearts of those telling it.

For a Western, all one really needs is a desert, and these can be found all over the world. Simply populate them with a bunch of poorly-dressed, morally-dubious characters motivated by money or revenge; then, make these persons willing to settle their scores through improvised, highly-dramatized contests of speed, by means of rifle or pistol, and you have yourself a Western (don't forget the music). If these brutal means seem antiquated, it's because the Western, itself, is a tale far older than its heavily-mimetic setting.

Thus, Sergio Leone shot his Dollars trilogy (1964-66) in Italy. Marcelo's Galvão shot his in Brazil—except in Galvão's case the Badlands isn't trying to be Mexico; it is its own place. The oral tradition it embodies through outlaw justice may not be exclusive to Brazil, but nonetheless feels quite at home there: Everything is dirty, stark and crude. The characters are morally-ambiguous, their actions little more than a violent circle spinning without end. There's little to glean, save that the people onscreen are animals.

The fun to be had is that Galvão doesn't even try to redeem these men. He merely presents them as they were: neither good, nor bad, but simply as men—men whose parents taught them to act, who, in turn, learned it from the harsh world, itself. Their fathers were killers; their mothers, whores.

I will admit, The Killer is slow-going at first, but eventually picks up. Once it does, it also enjoys playing with our expectations.

For instance, The narrator seems helpless, when the movie starts, where, point-in-fact, he's been hunting these men the entire time. For all intents and purposes, the story itself is true. However, whether it actually was or not is beside the point. The killer merely tells it to have the men sit still long enough to let down their guard, so he can shoot them. While they're sitting there with their heads stuck in the clouds, he's in his element, calmly reciting the same mantra he has, so many times before—to countless other men with prices on their own heads. 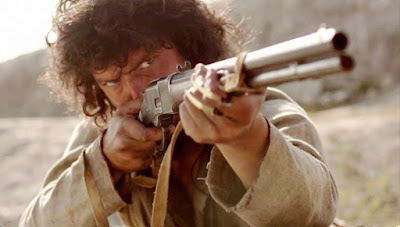 I especially enjoyed how front-and-center the violence is, onscreen. This is very much a Western with candor. Some patience is required to get through the setting up of the story's many dominoes—established in quick, speedy violence that unfolds almost too quickly to see. Once they start to fall, however, it doesn't matter.

This is because Galvão has a good understanding of what to focus on, when things get climatic. These expository casualties are almost peripheral. However, when main characters start to die, the camera doesn't pull away. For instance, when the Gringo shoots the big-mouthed whore in the head, her eyes stare lifelessly up at her killer. We expect to be shielded from that and all that goes with it, but aren't. The entire shot (so to speak) is done without cuts, and the effects work well. Likewise, after the Frenchman shoots the landowner through the eye, the camera drops to the table where his lifeless head lies; it lingers, there, and we're allowed to stare at the irreversible damage (and the convincing special effects).

At the same time, it may seem unfair that the Frenchman, himself, is killed off camera, sparing him an ignominious fate. However, by this point, we've seen enough violence committed by everyone involved; we don't need actually to see him die in order to picture how it will take place. I, for one, wasn't bothered by this. If some were, a consolation prize is given afterward: the killing of the narrator's audience. The last shot before the credits roll is of one of them, staring up at the sky with a massive, bleeding hole punched through his swarthy forehead. As Maximus in Gladiator (2000) once asked, "Are you not entertained?" Here, I certainly was. There's plenty of violence to go around.

I also enjoyed the technical skill of the filmmakers, here. The Killer is a handsome Western—not the most, mind you (that honor goes to Open Range [2004] by Kevin Costner). Still, as far as these movies go, you could do a lot worse. In fact, apart from one or two visual nit-picks at the start (some digital smoke, and a cartoon sandstorm) everything looks grand, here.

Everything in The Killer is nicely framed, choreographed and edited, too—especially after the narrative picks up steam. For example, there is a scene where the Gringo walks up to a bar and asks for a drink: The camera pans down and we see the full shot glass lifted out of frame; it is returned to the same spot by him, now empty but used afterward to trap a fly inside (much like how one of the hitmen did, in Leone's Once Upon a Time in the West [1968]: by using the barrel of his revolver). Next, the camera is raised and we see the Gringo prepare to leave; however, not before "freeing" the fly from its prison, only to mash it against the bar with his thumb (complete with brief, nauseating sound effects).

There's nothing visually dodgy about any of this. It's assembled with care, operating briskly and without missing a beat—much like the movie. Ask yourself if you enjoyed any of the following: the aforementioned Leone "spaghetti" Westerns, Peckinpah's The Wild Bunch (1969) or Tarantino's Django Unchained (2012) or The Hateful Eight (2015). If you did, chances are this one is also worth a watch. It's seldom boring, plenty honest, and incredibly violent.

Post-script: This trademark violence almost essential of Brazilian exports. To that, José Padilha's Elite Squad (2007-10) films were similarly so and I enjoyed them just as much as I did  The Killer. Whereas Hollywood movies, these days, generally come off as tepid, these Brazilian movies are refreshingly bold.
***
About me: My name is Nick van der Waard and I'm a Gothic ludologist. I primarily write reviews, Gothic analyses, and interviews. Because my main body of work is relatively vast, I've compiled it into a single compendium where I not only list my favorite works, I also summarize them. Check it out, here!
I'm an artist and a writer. If you're interested my work and are curious about illustrated or written commissions, please refer to my website for more information. If you want to contact me about a guest article, please use this contact form or reach out to me on Discord (vanderWaardart#5394)!