Episode 5 of Stranger Things 2 (2017) was primarily an episode of uncovering, exposing and convincing: Lucas tries to convince Max; Joyce doesn't try to convince Bob; and Jonathan and Nancy try to convince Murray and, with his help, eventually the World—"Them, with a capital T," as he puts it. 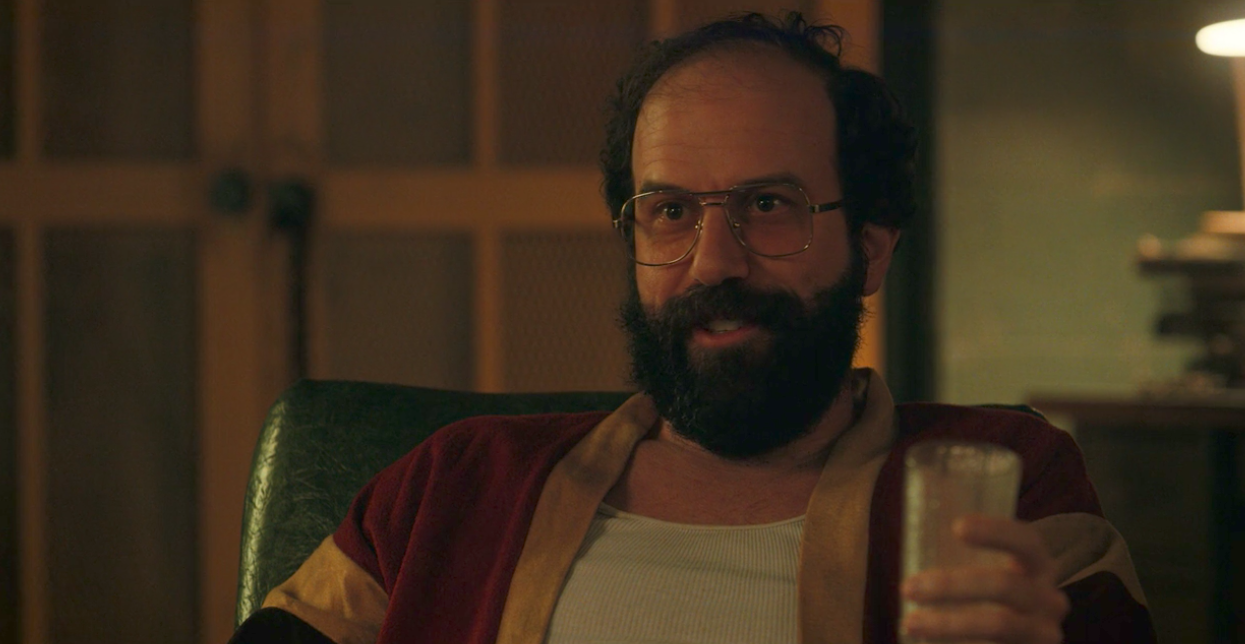 "Nothing you've told me is simple," Murray shouts. I liked this. Given the incredible nature of what we're dealing with—monsters, ghosts, and aliens—the resultant truth is so absurd compared to what's normal that unveiling it requires a certain level of finesse. In other words, to try and tell it straight-up isn't always the best idea, because it's too much to take in, or too different; the mind won't be able to process it because it's too alien, and thus will reject it.

So, when Lucas tries to spell things out to Max, she thinks he's pulling her leg (or is totally insane). Without any proof, his incredible tale is easy to dismiss. Point-in-fact, Joyce and the kids don't even try to tell Bob; they go out of their way not to. They tell him it's a game. In a way it sort of is, but they leave of the part where it's true, letting him play long enough to figure that out for himself. By the end, he believes them, because what he sees with his eyes is harder to dismiss than anything Joyce could have tried to tell him, beforehand.

Joyce is a character who understands what it's like not to be believed. Her hesitation, here, makes perfect sense—especially considering that she loves Bob, both wanting to protect him, and not lose him because her tale is too incredible (think Sarah Connor, in Terminator 2 [1991] telling her would-be boyfriends about Judgement day and her son being "this great military leader," only to have all of them walk away, thinking her nuts).

On the other hand, Lucas is too young to understand how this works. Because his young mind operates in black-and-white, he simply tells Max everything. As a result, he's left feeling confused when it blows up in his face; to him, the absurd narrative makes perfect sense, provided one has faith. Max doesn't. If she had, I would've been surprised, even annoyed. Instead, her reaction is more or less how I imagined it would be.

So, too, is Murray's, when dealing with Jonathan and Nancy. They literally have the truth, on their tape recorder, and, like a couple of naive kids, think it's enough. Murray is here to enlighten them as to how things actually work. He's more patient than they are, taking his time to come up with a solution. He grumbles to himself, making a drink and turning on some music. Meanwhile, Nancy rolls her eyes and taps her foot. She wants to solve the problem now and doesn't have time for games. Yet, that's exactly what they're doing.

Murray arrives at his solution organically. As he waters-down his drink with beer, he associates the act of doing so with his new lead from Nancy and Jonathan. In other words, the truth doesn't matter if people won't swallow it. To get them to do that, you have to make it palatable. You have to lie. In the case of their smoking-gun, it felt to me like part of a court case. As such, there's a great deal of theatricality and lateral approach involved—the sort kids like Nancy or Jonathan aren't going to understand because it's completely new to them.

I liked this, because it makes the kids in the show feel like kids. They still have some learning to do. At the same time, it also makes the adults in the show look a little smarter than unusual. As much as I enjoy the whole "kids against the world" mechanic, I'm even more of a fan of a well-rounded cast, one that keeps the complete-idiots to a minimum. Deliberately stupid characters have their role to serve, but I can't stand it when a script is overpopulated with dunces just to make the heroes look more clever than they really are. Personally I like heroes who make (understandable) mistakes.

This time around, the side elements of the show were hit-or-miss, for me. They're a little lengthy by internet standards so I'll talk about Dustin and Eleven's arcs in a second article. For now, I'll simply say that I loved Dustin, and Eleven felt, as usual, underused, wasted.

The episode ends with Joyce, Bob, Mike and Will driving out to the field where Hopper disappeared. Here, we get one of the funnier moments in the episode—another classic homage, cleverly-hidden in plain sight: the scarecrow from Back to the Future (1985). In that film, Marty travels back in time. As he does, his windshield is swept by blue flame. The moment it clears, a field is revealed in front of him, guarded by a lone scarecrow. He plows through it; it lands on his windshield, leering at him. He screams. This was probably one of the funniest moments in the whole movie.

Fast-forward to 2017 and we have the same basic gag happening with Bob and the others. The moment I saw it, I laughed out loud: one, because it is, on a basic level, a really funny scene; but two, because it was also a clever nod to one of the 1980's most classic movies. It happens in the most nonchalant, innocent kind of way, too: Sean Astin doesn't break the Fourth Wall, and tell us "Hey, kids, this is the scarecrow from Back to the Future!" It unfurls, and whether or not we recognize the gag won't change the fact that it's hilarious, to begin with. If we do, it's effectively frosting on a cake.

Next, Bob and Joyce free Hopper from his prison, underground. The moment they do, the earth cries out, and Will collapses, quivering. Roll credits.

I'm still waiting to hear the reason as to why he has True Sight, other than the writers of the show allowing it, to give us, the audience, some much-needed perspective. Is there perhaps another reason for it—one that isn't parasitic to the villain? Will and the Shadow are linked, much like Harry was to Voldemort, in the Harry Potter series; and yet, in the end, Harry survives, while Voldemort does not. I'm hoping for something a little less positive, regarding Will the Wise. Then again, I'm all about bittersweet victories, or heroes who ultimately must sacrifice themselves for the greater good.

As for the villain, the more people learn about it, the less powerful it becomes; it relies on ignorance to remain dangerous, so exposing it as something physical means that it, in turn, becomes real, and as a result can be killed. Such an unveiling also grounds it, makes it shrink, versus however large it has become up to that point, ballooned to said extremes by our overactive, fear-stricken imaginations. In the end, will its weakness be something simple, something bland? Or will defeating it come at a terrible cost?

Time will tell. I'm hoping for the latter, though.
***
About me: My name is Nick van der Waard and I'm a Gothic ludologist. I primarily write reviews, Gothic analyses, and interviews. Because my main body of work is relatively vast, I've compiled it into a single compendium where I not only list my favorite works, I also summarize them. Check it out, here!
I'm an artist and a writer. If you're interested my work and are curious about illustrated or written commissions, please refer to my website for more information. If you want to contact me about a guest article, please use this contact form or reach out to me on Discord (vanderWaardart#5394)!