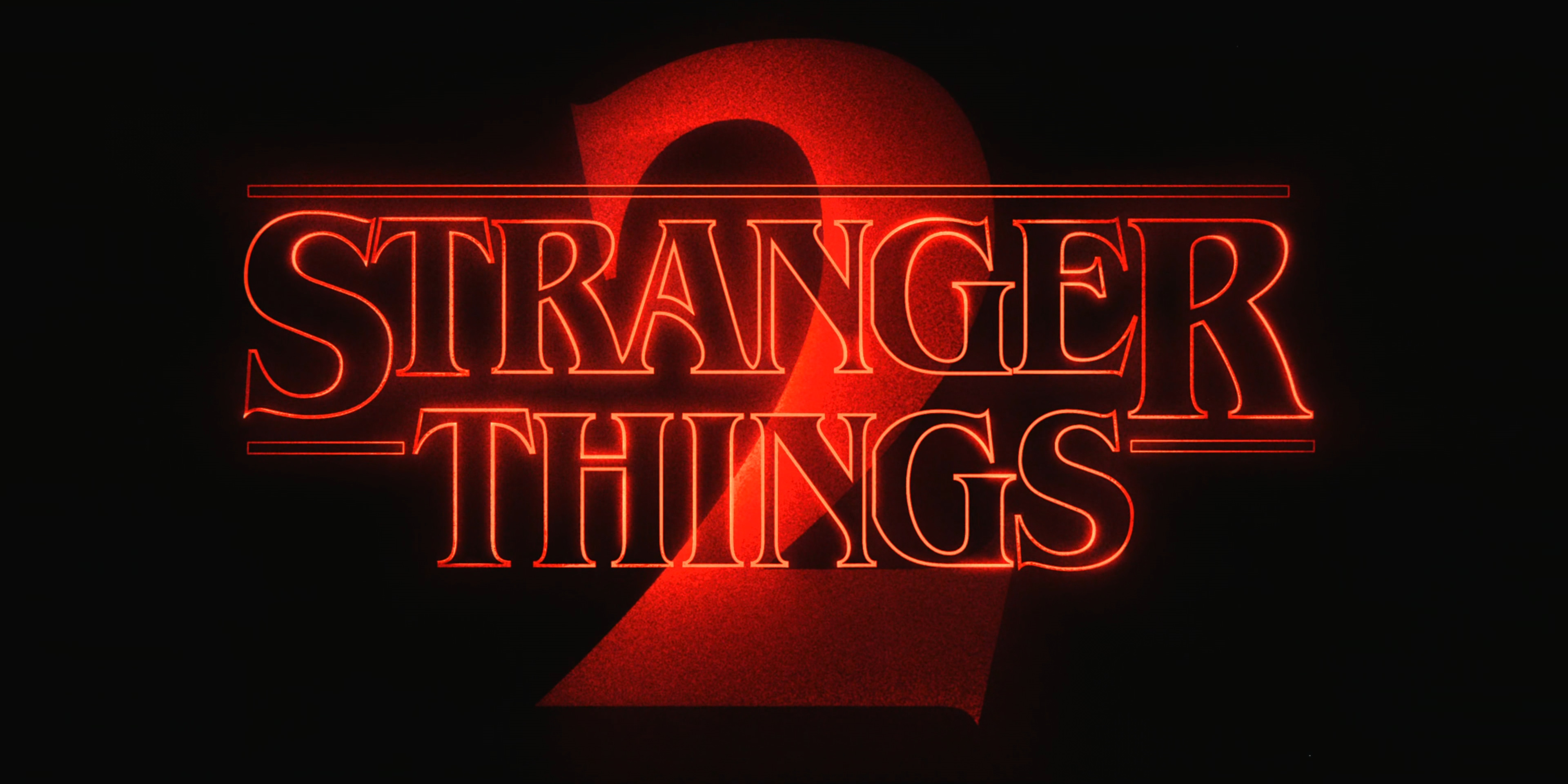 I've finally started to watch Stranger Things 2 (2017) on Netflix (it actually came out on Halloween, of last year, but I'm only just getting around to it)! As of now, I'm only one episode in, but wanted to give my impressions, thus far...

If you're like me and haven't seen it yet, bear in mind, I generally get into specifics. That being said, I like what I've seen; the show continues to lay wreath after wreath on the altars of Spielberg, Cameron, Henson, and Carpenter. It's steady, consistent hero worship, made with tremendous attention to detail and great care. I don't mind that, in the slightest. In fact, if the show didn't do that, I'd have demanded a refund.

However, it's still not what I'd call perfect, based on what I've seen. Some minor complaints that I had about season one persist—a shame, given the opening this around makes the same promise it did the first time around: a true step back into the past, complete with a slow, sliding reveal of the glowing title font—much like the introduction to Cameron's The Terminator (1984) with its memorable keyboard melody and odd-meter (13/8) time signature. Hell, they even included film grain. They certainly didn't have to, and I have to wonder how many millenials will see it and wonder if there's something wrong with their smart phone or flatscreen TV.

Past the solid, reliable intro, the first episode, "Mad Max," is straightforward, but decent. Plenty of "Do you remember this?" moments, with the Bad Boy pulling up to the school parking lot in a Firebird. He emerges, sporting both a mullet and an entire outfit of denim, jacket included, whilst The Scorpions' "Rock You Like a Hurricane" plays in the background. Mullets always struck me as odd, but the girls in the scene admire his ass, not his hair. As for the music, virtually anything from the 80s is my weak spot, so I didn't mind the naked homages. However, some youngsters might not even know who The Scorpions are; in that case, self-indulgent moments like these might be lost on anyone outside the show's intended audience. As a fan, I found the selection of tracks, so far, just as predictable and enjoyable as season one's.

My gripes aren't with the music, though. They're with the monsters.

That is, it feels odd to me that you have a show that's essentially about monsters, and yet fails to portray them much how they would have been presented, in the old days. In other words, monsters from the 1970s and 80s would have been guys in suits, with slime. Maybe some animatronic appendages, some stop-motion—or puppets, as was the case with David Cronenberg's The Fly (1986). All the same, the idea of purely-digital creatures would have been completely alien to the special effects technicians of old. The closest you'd have come to it, back then, was either a green-screen effect, or the hiring of a Disney animator to hand-draw(!) the Monster from the Id, from Forbidden Planet (1956).

Some modern-day pictures try to capture the effects old. In Joe Dante's The Hole (2009) you had stop-motion effects equivalent to those from The Gate 2: Trespassers (1990); so, too, in The Babadook (2014). Yet, their inclusion or omission, seems as ever, to be a personal choice. However, in Stranger Things, it seems like the one thing that is most out of place are the monsters, and the Upside-Down. When the protagonist is at the arcade with his friends, and things go dark, the room is treated with a digital makeover, covering everything in tentacles and moss (or whatever that stuff is, growing on the walls). It lacks the tactile feeling of real slime precisely because it isn't. Later, when he's at home, and experiences another vision, the front door opens, and we're essentially given a modern-retro retread of the abduction scene from Close Encounters of the Third Kind (1977)—except Spielberg shot it mostly with lights and cameras. There were analogue effects, to be sure, but they were used much more minimally compared to the copius digital effects relied upon in Stranger Things.

With these conspicuously anachronistic visuals, we're left with something that isn't from the 1980s at all. The vintage plastic reality isn't completely recreated, with total authenticity. Too much has changed, it seems; there's no going back to the way movies and shows were made. And frankly I wouldn't have cared one jot if the makers could still have emulated the classic monster look with new technologies. But they don't. They check a lot of boxes, except the most important one. Granted, I'll reserve passing judgement on the new season until I've seen everything it has to offer.

The other thing I wanted to discuss is Eleven. At the end of episode one, Eleven is revealed to still be alive. At the start of episode two, it cuts back to season one, with her being in the Upside-Down, in the halls. I see her walking down them, their walls covered in that same, incongruous resin. The camera rotates 360-degrees around her, and I roll my eyes, reminded how filmmakers nowadays can't resist cramming as much as possible into every shot.

Worse, in the "shadowy" hall, everything looks computer-generated except for Eleven. I was given the impression of staring at a character in a video game, as seen in the 3rd-person, while the halls reminded me very much of those from Id's 1993 title, Doom—they looked no more real those did, twenty-five years ago. I found myself dwelling on the glittering walls of the Derelict, from Alien (1979). With that set, everything is hidden in shadows—real ones. Things are hidden, concealed, and go wild in one's imagination. In Stranger Things, however, the halls are dark, but seem bright. I can see down them for miles, comparatively-speaking. There's no room to imagine anything at all.

Certainly the makers of Stranger Things pay extra-special attention to their sets and how to light them. But when things go Upside-Down, suddenly we're dealing with something not from the 1980s. It very easily could have been, and I'd wish they'd made that change, this time around. Given the treatment of special effects crews like ADI by studio executives, in the recent past, perhaps the show's makers simply couldn't find or afford the old-school. Maybe they weren't interested. Who knows.

Back in the hall with Eleven, I watch as she reaches through the wall. Suddenly I'm looking at the real world, dealing with slime and practical effects again. I think the writers could have simply started from that view point: in the real hallway. Have the soldiers pass by the wall, only to have it open and Eleven push through, covered in slime. Surprise! No need to show everything behind the wall, where she came from. It keeps things practical and mysterious.

Sometimes, I think the show tips its hand, too often. Part of what made monster movies from the 1970s and 80s so effective is the monsters are kept hidden—to generate more suspense, but also to hide the shortcomings of the special effects. I find it curious that thirty years later the visual effects still need to be at least partially-hidden to achieve maximum effect. Alas, the show's makers continue to show too much. Maybe the rest of the season will exhibit a more frugal approach from them.

That's as far as I've gotten. Apart from that, the show seems fine, more or less. In particular, props need to be given to the casting department for recruiting Paul Reiser and Sean Astin. It was nice to see them both, onscreen, working with the kind of material that made them famous, to begin with, some thirty-odd years ago. I've also loved the show in the past for its many nods to classic movies, including newer entries like Jonathan Glazer's Under the Skin (2013). Probably my favorite moment in season one was the nerdy teacher showing his date the CPR scene from John Carpenter's The Thing (1982)—just as one of my favorite moments in Carpenter's Halloween (1978) was the little girl watching The Thing from Another World (1951) and Forbidden Planet. I love that kind of stuff, and look forward to more of it, in the show as I continue to watch season two.

Stay tuned as I continue to watch the show and post updates with impressions!
***
About me: My name is Nick van der Waard and I'm a Gothic ludologist. I primarily write reviews, Gothic analyses, and interviews. Because my main body of work is relatively vast, I've compiled it into a single compendium where I not only list my favorite works, I also summarize them. Check it out, here!
I'm an artist and a writer. If you're interested my work and are curious about illustrated or written commissions, please refer to my website for more information. If you want to contact me about a guest article, please use this contact form or reach out to me on Discord (vanderWaardart#5394)!