January 11, 2018
With episode 3 of Stranger Things, I found matters to be somewhat pedestrian. There were things I enjoyed... and things I didn't. Generally the tone of the show continued to surpass any disdain I had for shoddy visual effects. That being said, your mileage could vary depending on your own tolerance. Can kids today even tell the difference? Do they care? I wonder.

To its merit, episode 3 provides season 2's biggest surprise, up to this point: Sean Astin's character, Bob. He doesn't look like much, at first glance. However, his seemingly-timid stories about bad dreams and bullies are surprisingly impactful and genuine. They feature a smaller, meeker heroism derived from someone obviously lacking a square jaw and chiseled physique. He's not breaking any new ground, here, but for some reason his reprisal of Samwise the Brave caught me off guard. It probably has as much to do with how the show treats him: goofy and awkward, the everyday man who works at RadioShack. Yet, when it counts, he surprises you with some actual gravitas. While this emotional heft is obviously welcome, I still feel like he's a mostly passive character. In fact, when giving salient advice, Bob does it almost without realizing how insightful he's really being. Both he and the science teacher, Mr. Clarke, seem a little aloof, in that regard. Adults often do, in these circumstances; like in Fred Dekker's The Monster Squad (1987), the kids, here, are the heroes.

Randy Havens' mustached Mr. Clarke was one aspect that I especially enjoyed, from season 1. This time around, I feel he's been criminally underused—hovering indiscernibly in the periphery for three episodes, except to briefly deliver a talk to his students on Phineas Gage. As he does, he drags a marker over a diagram of a skull, whilst looming behind a 3M overhead projector. As excellent as that scene is, on its own, I also feel it worthwhile to mention the projector—the sort I saw being used in my own middle school class. Of course, this might seem innocent, or minor. Yet, all the same, I feel its incorporation intentional, demonstrating how such devices can effectively comprise one's childhood; it only takes one simple glimpse to bring it all back.

Apart from little surprises like that, the rest of the episode felt fairly straightforward. In a nod to Gremlins (1984), Dustin finds a cute little monster that he, perhaps unwisely, wants to keep. He names it in relation to the Three Musketeers candy bars both of them (and no one else) seem to like: d'Artagnan ("Dart" for short). I appreciated the name for another reason; it was the name of the protagonist from Alexander Dumas's 1844 novel, The Three Musketeers. Not originally a musketeer, d'Artagnan eventually befriends Athos, Porthos and Aramis. Can Dart do the same with Will, Lucas and Mike, who attempt to destroy him?

I appreciated this curious blend of disparate allusions (though I'm leaning on the candy bar reference being the sole intentional one). After the lads reject Dustin's "friend," it escapes, and the hunt is on.

Sound familiar? It did for me. As Mike, in particular, was snooping around, a part of me expected Dart, now full-size, to drop down from the ceiling and grab him, just like the creature does to Brett, in Alien. Even though nothing happens, I appreciated the parallel—here for the wary to see, not the unobservant (unlike Danny Boyle's Sunshine [2007] and its self-referential dialogue). This time, however, while I could sense my expectations being played with, I still gathered that Mike was more-or-less effectively "safe" because this show makes for a gentle DM (dungeon master); it doesn't kill its main characters. I'm not a fan of main ones being killed off, too soon, but don't like false scares happening too often, either. Sooner or later, someone substantial (no offense, Barb) has to kick the bucket, or I'll stop thinking the danger is real and inevitably lose interest. Will season 2 deliver Stranger Things' first major fatality? I hope so.

As it turns out, the whole hunt is a red herring, and the episode ends with Will being chased down the hall by a dark, mysterious force. Here, the special effects bothered me, as much as they always do, whenever this show pulls A Link to the Past (1991). Much like that game, the halls looked fake. The game, however, didn't need the Dark World to look real; the show kind of does. Alas, Will glides over the floors a little too smoothly and everything looks strange, bright and oversized. Yet, I didn't feel creeped-out; I just felt unconvinced. Given the photographic talent the show boasts, I'm frankly left feeling puzzled as to why this is allowed to happen. Of all the visuals they could have selected, they pick the ones that pointedly undermine the scene's intended design: to scare.

As Will is pursued down the hall, I found myself thinking of the chase scene with the talking head from Time Bandits (1981). I'm not saying that 36-year old scene is visually-perfect, but at least the set felt physical. The effects of the space itself didn't take me out of the scene. In Stranger Things, they did, because the space looked completely fake when it didn't have to. Regardless, the chase ends with Will going outside. There, the shadows gather over the school roof and take shape (note the pointed head, like H. R. Giger's infamous alien). Will turns around, deciding to follow Bob's advice, telling the shadows to make like a tree. It doesn't work, and he is subsequently invaded.

When he is, I felt the use of digital smoke to be a bit censoring. Had the makers used physical tentacles, the appendages would have penetrated his eye sockets, nose and mouth. Instead, smoke seeps into his orifices without physically damaging him. This trick reminded me of the deliberate use of spaghetti as "gore" in Tropic Thunder (2014)—a tactic that made the disemboweling scene in that movie appear less-disgusting or "real" as it would have, according to Ben Stiller, had they used real offal, like in Romero's Dawn of the Dead (1971). In Tropic Thunder it was supposed to look fake; in Stranger Things, I felt the tension of the possession was partially disarmed by the same fakery—intentional or otherwise.

Fake or not, the smoke demon, for me, just isn't that scary. It's akin to a bedsheet, or the black spectre animated by Mike Jittlov in Jerry Zucker's Ghost (1990): not obscured, without enough substance for it to feel dangerous when presented nakedly as a "threat." The only way for that kind of monster to work is if you're not actually looking at it, or can't see it in its entirety. It needs to be felt, not seen. I should add, the power of photographed smoke allows for such obfuscation. The shadows that invade Will, on the other hand, aren't photographed; they're computer-generated, and hence look more "solid" than real smoke, thus not real at all, themselves.

This side-effect isn't aided by the fact that the monster itself is constantly front and center, completely visible despite this scene supposedly being at night. The Upside-Down is oddly bright, failing to invoke some much-needed nyctophobia, here. So why make it dark, apart to illustrate a plot device that the Upside-Down is "somewhere else?" On top of that, why do the makers of the show display the chief monster so boldly? They're showing it off, as though it were some kind of visual triumph. It really isn't. The banshee from Darby O'Gill and the Little People (1959) was more terrifying: 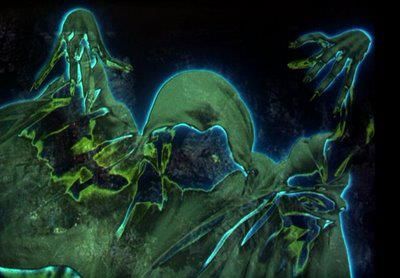 The whole point of a ghost is not to look solid, but insubstantial. You're not supposed to be sure what you're staring at, the full-extent remaining unknown, no matter how hard one looks. The shadow in Stranger Things exhibits very obvious visual limits. There's nothing Sublime or endless about it. Thus, we're left with something that merely feels like the show blowing its own horn: "Look, my budget is bigger! I can afford computer generated effects!" In my opinion, the money is not well-spent.

I figured this would happen. I wouldn't care, except it takes up more of the run-time than I would like. To be fair, Dart looks fine. Or rather, there's at least something notably unnerving about him as he sprouts extra limbs, or shrieks hellishly at Dustin. Such cries fall on deaf ears. Instead, Dustin smiles back, gazing sweetly at his discovery like the scientist in The Thing from Another World (1951). In other words, he's too smart to know any better.

On to episode four.
***
About me: My name is Nick van der Waard and I'm a Gothic ludologist. I primarily write reviews, Gothic analyses, and interviews. Because my main body of work is relatively vast, I've compiled it into a single compendium where I not only list my favorite works, I also summarize them. Check it out, here!
I'm an artist and a writer. If you're interested my work and are curious about illustrated or written commissions, please refer to my website for more information. If you want to contact me about a guest article, please use this contact form or reach out to me on Discord (vanderWaardart#5394)!