January 20, 2018
Here is part three of my three-part review of season one, from Dominic Mitchell's In the Flesh (2013). Whereas the other two focused on positives and negatives in the show, this portion of the review is mostly concerned with the larger themes at work, in and out of it.

Many zombie narratives make the undead truly dead, in the sense that nothing human in them remains; thus, they become mere echoes of the dear-departed, tormenting those who remain as all-too-familiar shades.

What makes In the Flesh somewhat different is how it shifts some of the human struggle onto the undead without sacrificing what's at stake: survival. Granted, it feels inevitably more pedestrian when displayed in an immediate, everyday setting. These are not fantastical wastelands; neither civilization nor its inhabitants are presented as some kind of abject, faraway husk. Instead, they mirror or parallel our lives, as they exist, in the present.

I enjoyed this comparison in that it seemed less remote than the typical, post-apocalyptic fare. Not that there's anything wrong with the Mad Max (1979) or Star Wars (1977) approach. In fact, I actually prefer delving into those worlds—to glean the hidden, allegorical message contained therein. At the same time, those worlds can take on a life of their own, to the extent that the message sometimes gets lost—carried away by the imaginary setting and its fantastical inhabitants. If one wants to avoid that, it requires a different approach.

Of course, the use of this "path least traveled by" requires a trade. A down-to-earth approach might lessen the effort (and delight) of interpretation, by genre fans who come to expect more... lateral packing materials. Likewise, replacing such wrappings for something less grandiose arguably attenuates the sheer potential a lush fantasy offers; it drains its entertainment value in favor of something potentially mundane.

There's always a balancing act, in any composition, a give and a take. If one chooses to deviate away from the fantasy approach—to make a situation different enough to communicate what needs to be said, without risking the message being lost in the narrative backdrop—this act remains. In the Flesh's zombies are little more than metaphors, in that regard, serving as allegories for whatever statement Dominic Mitchell is trying to make. For him, the meaning behind these zombies is intentionally closer to the surface than ordinarily permitted.

What's noteworthy here is that it still manages to entertain, covering a lot of unusual ground, in the process. As satire, the show works very well. As pure entertainment, its success depends: entirely on those viewing it and what they expect, or want. That is, when seen as primarily a social drama, the show works well; as a zombie tale, it has just enough zombie elements injected into it to potentially attract viewers who otherwise might not enjoy what's being offered: a show where human drama is the sole, patent focus, not the explosions and kills.

To that, much of what In the Flesh exhibits is virtually unrecognizable from typical, post-apocalyptic zombie fare. There's very little in the ways of gore (there's a few good "brain-eating" bits, however). This can be good or bad.

In other words, entertainment and message hang in the balance. In the Flesh's chief statement is straight and effective in that it isn't distracted or buried. To its credit, it remains interested in the aforementioned "grey area," making humans and zombies harder to tell apart than is usually the case. That being said, this line is about as thin as one can get. To that, whatever preference one has concerning the amount of distance such a line generates—that is idiosyncratically variable.

In other words, people watch similar shows for different reasons. Some rely on advertisement to meet their cinematic dietary needs, whilst others eschew them for a less conventional approach. Thus, when working with familiar material, peoples' expectations cannot be avoided. Such is the case with zombies, a well-trod staple of fantasy, horror and science fiction—prevalent even before George Romero made the whole concept undeniably infectious with his seminal debut, Night of the Living Dead (1968).

Likewise, Richard Matheson introduced his own readership to a different take on zombies, back in 1954, breeding his own zombies-and-vampire hybrid, in I am Legend. Matheson learned and toyed with their expectations. So did Rod Sterling with The Twilight Zone (1959) and Leslie Steven,  The Outer Limits (1963)—not to mention their combined, numerous reincarnations, over the years, extending all the way up to Charlie Brooker's Black Mirror (2011). Each time, people expect more of then same, but want things to be different. Just how different that is varies depending on who you ask. Personally I don't think it requires much.

I have nothing against either of these outcomes, however. At the same time, I am leery of something being different to the extent that it makes a genre feel alien—so removed from its palimpsest that the heritage becomes untraceable, the show unrecognizable as belonging to something else; it feels fake, counterfeit. However, if a show can still deliver something cathartic, beyond the artist merely toying with genre because they can, I won't feel my time to have been wasted, nor take umbrage with the blatant pantomime. 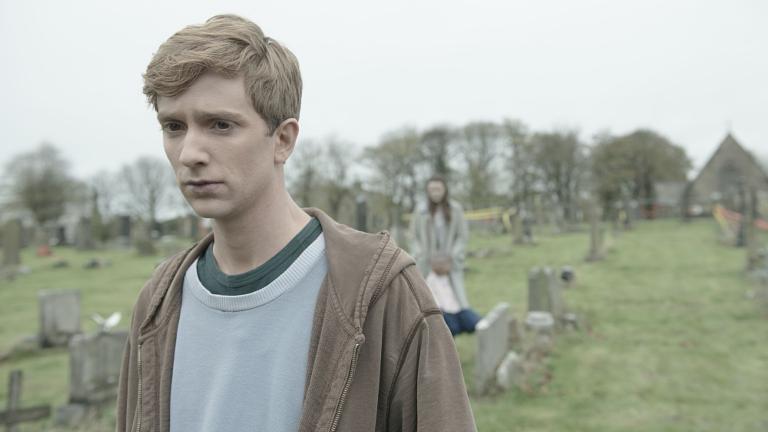 Such is the case with In the Flesh. The entire time I watched it, I felt engaged, until my own predispositions regarding the undead in media became something of an afterthought. It wasn't so much of a wasted opportunity, either, because there are already so many titles that have achieved great critical acclaim, in that regard. Dawn of the Dead was excellent, as was Zack Snyder's sequel 2004 remake; I loved the Left 4 Dead (2008-9) series, and (some) of the Resident Evil (1996-present) titles; 28 Days Later (2002) and its sequel; the Peter Jackson splatter-house movies ("I kick ass for the Lord!")—to name a few. Instead, In the Flesh tries to be something different, using the same devices in unconventional ways.

And you know what? For what it is, it works very well indeed.
***
About me: My name is Nick van der Waard and I'm a Gothic ludologist. I primarily write reviews, Gothic analyses, and interviews. Because my main body of work is relatively vast, I've compiled it into a single compendium where I not only list my favorite works, I also summarize them. Check it out, here!
I'm an artist and a writer. If you're interested my work and are curious about illustrated or written commissions, please refer to my website for more information. If you want to contact me about a guest article, please use this contact form or reach out to me on Discord (vanderWaardart#5394)!