Marcelo's Galvão's Brazilian Western, The Killer (2017), is both clever and visceral—as cursed and mercenary as its title character(s). Note: Before I proceed, I wish to note that this article will serve as part one of a two-part review of the movie.

The movie starts with a tense confrontation in the middle of the road, somewhere (where this is isn't explicit, but seems familiar, regardless): A man sits down, seemingly forced to do so by two dangerous men. His boys are with him, and his would-be adversaries plan to use them as leverage. Meanwhile, they tell the father to make coffee; when he cannot do that, he offers to tell them a story, instead. As he does, he appears callow and awkward.

Here, all the power seems to be with the opposing men: They ask; he obeys—as simple as that. Then again, perhaps not.

The sheepish narrator embarks on a fable, concerning a land that seems never to have been. We're unsure of the time or the place. He simply calls it "the Badlands." It is dry and bare. Lives are brutal and short; one must be like an animal to survive. Everyone speaks Portuguese. Some are cangaceiro, or bandits; and macaco—literally "monkeys," a less-than-endearing moniker supplied to the local law enforcement.

The Killer presents us with a good-versus-evil tale—a slightly older version of cops and robbers: lawmen and bandits... except, in this case, no one is really good or evil. Instead, everyone operates as animals do, without morals at all. They do what they want, as part of the land. It raises them up; before falling back in, they pass whatever they've learned onto the next generation. Thus it seems that fanciful terms like "good" or "bad" have no place in the natural order of things: killing to survive. Even outwardly-hedonistic aims of paying whores with stones ultimately results in unwanted offspring. The short-term is pleasure; the long-term are children, who can be taught.

In any case, as the narrator's story unfolds, a baby is rescued from the unforgiving desert—first, from a mountain lion, and then from an oncoming sandstorm—by Seven-Ears, an aging cangaceiro. Here, the narrator may as well have started with Moses in a basket, floating down the Nile; or Achilles, being dipped into the river Styx. In the case of the hero's surrogate father, he passes his lethal skills onto the next generation before riding off into the sunset, never to be seen again.

The next-in-line grows into a man. Eventually he leaves home, searching for his "father." Walking into a saloon, one fateful night, he guns down several men. They have "bad eyes" and are holding shiny rocks. It turns out, these men are bandits; the rocks they're clutching are payment—from the Frenchman, the town's boss and source of much of its wealth. His wealth, it turns out, is also the source of much woe; whereas before men killed to eat, now they kill for jewels—an avarice that eventually consumes them all.

The hero, now calling himself Cabeleira, is hired by the Frenchman after killing one of his servants. After that, motivating him to kill is easy. Simply introduce him to the local, top-dollar whore. It's a sound arrangement, too: he likes sex; she likes jewels. To make ends meet, he kills men who own land wanted by the Frenchman. The questionable ethics of doing so is of little consequence to Cabeleira, who believes that no one owns the land; the land owns them. That's about as complex as he gets. He's grizzled and tall—a man of few words, but quick on the draw.

The rest of the narrator's story is a tangled web of revenge, money and sex (the word "love," here, doesn't really seem appropriate):

Eventually a band of nameless cangaceiro on the Frenchman's payroll kill an entire family (Cabeleira won't kill women and children). The father survives and makes his way to town, masquerading as a bandit he killed, beforehand. In town, the local macaco peg him as an imposter—namely their sketch artist, who draws him. This impromptu portrait effectively serves as a death warrant: to be handed to the Frenchmen's assassins, who will kill whoever it resembles.

Following this, Cabeleira is sent to deal with him, but gets shot. The bereaved landowner then goes to town— killing the sketch artist, though not before having him sketch himself (seeing as the sketch artist in this movie is depicted as an especially horrible person, it makes the self-defeating irony here rather succulent). The landowner then proceeds to the Frenchmen's residence, where he kills the boss's guards and son. Alas, the wily Frenchman didn't climb to the top by being meek, and shoots him twice: once from under the table, and once in the face for good measure. Enraged at the death of his son, the Frenchman wastes little time, sending the deadliest hitman of all, the Gringo, to deal with Cabeleira (who survived being shot, but clearly is losing his touch).

Meanwhile, Cabeleira has his hands full: his youthful son has been delivered to him by a co-worker of Cabeleira's favorite whore, now dead (slain by the Frenchman's late son). She warns Cabeleira that the Gringo is gunning for him, only to be killed afterward by the Gringo for having a big mouth; Cabeleira kills the Gringo and the Frenchman, before taking over the whole business. He then collects his son, and the whole cycle ostensibly repeats.

We cut back to the narrator, who has seemingly finished his story. His audience is visibly entertained, disarmed by the storyteller's silver tongue. And yet the story for the two men, we discover, is just beginning. That is, the movie is nearly over and we still don't know their names—theirs or the narrator's.

Following the narrator's bloody yarn, we learn in under a minute that he is actually the late whore's son, ergo Cabeleira's; in turn, his two audience members are actually wanted men—bandits. In a flash of violence, he kills them. As he walks away with one son, the other stands over the corpse of one of the bandits, holding the dead man's sketch. The father commands him to follow them, shouting overhead as he retreats out of frame that there is another man to tell this story to before the day is out.

So the tale winds on, the violent trade of doing so passed from father to son. Meanwhile, those who hear it fail to understand they are a part of it. Their fates are written and sealed. 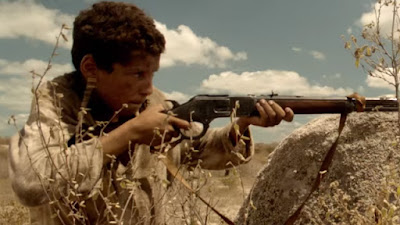