January 22, 2018
The moment I saw Macon Blair, playing a gangster "custodian" in Jeremy Saulnier's Green Room (2015), I thought he looked familiar. As it turns out, he also starred in Saulnier's Blue Ruin (2013), a movie I very much loved; it was muted, bleak and driven, a gritty tale of revenge exposing the kind of rugged, criminal violence normally found in places off the beaten track. It's jarring because it worms unexpectedly into normal, innocuous settings, similar to the Coen brothers' Fargo (1996), Sam Raimi's A Simple Plan (1998), David Cronenberg's A History of Violence (2005) or Peter Chan's Dragon (2011).

Note: It's also worth noting that Blair, himself, directed the pitch-black comedy I Don't Feel at Home in This World Anymore (2017). It's both equally shocking and laugh-out loud funny, combining Hamlet-level violence with off-beat humor as heroes, hopelessly out of their depth, square off against equally incompetent (albeit totally ruthless) villains. Everyone's complete and utter inability is all part of the fun, in that movie.

Also, in this review, be forewarned: I tend to go into spoilers. 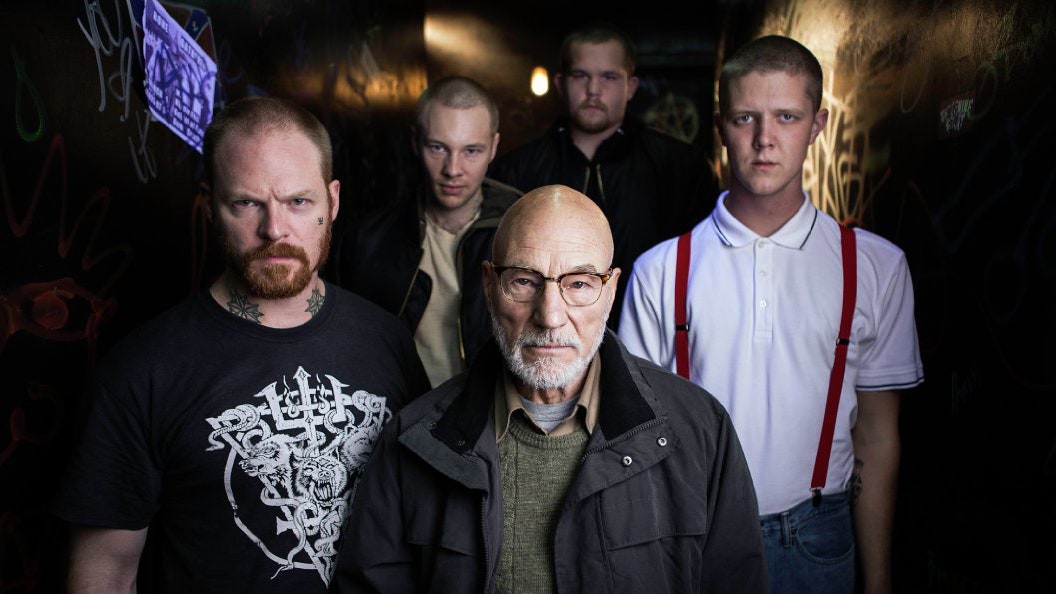 I loved Green Room for the same reasons I loved Blue Ruin and Blair's debut. It contains the same crisp visuals, in the sense that it captures both the lush scenery and dirt under everyone's nails. Also like them, it has violence in spades, each instance accented with some truly outstanding gore effects. At the same time, while the comedy isn't excluded, here, Green Room feels like more of a horror film than either of its predecessors, one being a revenge drama, the other a black comedy bent on exploring the outer limits of existential crisis. The ingredients are essentially the same; the balance is anything but.

In Green Room, we're presented with a punk band: four unlucky teenagers who've traveled miles from home (on siphoned gas, no less) to play at a gig that ultimately fizzles out, netting each a cool $6.87 after all's said and done. They're pissed, but fail to correlate their paltry turnout with their self-defeating "analogue" approach. Young, impetuous and determined as they are, the quartet remains dead-set on going back with full pockets (or at least enough to pay for gas).

In the process, they decide to jostle the owner of the last venue. Chagrined, the desperate man points them towards his cousin—someone that, according to him, has the wherewithal to supply them a truly prosperous gig. Encouraged, the gang lets him off with a warning before going on their merry way. That being said, their lucrative detour is provided with an initial caveat: "Play your old stuff." Their crowd is mostly Nazis, who evidently like their music loud.

No sweat, the band figures (the need for cash makes for strange bed fellows). They make it in time and play through their set, antagonizing their audience by unwisely screaming "Nazi punks fuck off!" No one dies, however (even neo-Nazis have a sense of humor, or so it would seem): 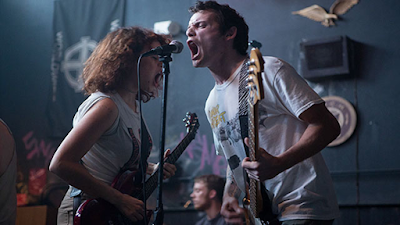 Invigorated, the emboldened band prepares to leave—or rather, they're being ushered out by an irritable bar employee called Justin. He appears troubled, wanting no one to go into the back room. Alas, Pat (an awkward, callow Anton Yelchin—rest-in-peace, good sir) does just that, darting inside to grab a bandmate's derelict phone. When he does, he looks down and sees a girl with a pocket knife planted squarely in her temple.

The rest of the film essentially takes place in one spot: the venue. Much of that is inside the room the body is found in. There's also a secret room under the floorboards and the bar outside. Apart from those, and some outdoor shots, at the start and end, everything is contained at the crime scene. I, for one, liked that; there's little to distract from what's happening onscreen.

Before we know it, the bodycount skyrockets. It doesn't discriminate, either, targeting the innocent and guilty (and those in between) alike. I found the kills to be especially gruesome and well-executed, the gore effects top-notch and the delivery believable. Improvised weapons—including mic feedback (a first, for me), bar stools and fire-extinguishers—gave it a home invasion feel. Think You're Next (2013) except rather than a yuppie mansion, the place being invaded is a bar owned by someone else; it's From Dusk Till Dawn (1996) minus the vampires (and jarring tone shift).

In any case, after the body is found, the "pesky kids" are locked inside the room—with Justin and a moll named Amber. Erstwhile, the crime boss (a bearded, scowling Patrick Stewart) has arrived on the scene. His name is Darcy and he is not pleased. This is because Pat, having seen the victim, has already has called the cops "about a stabbing." To deal with it, Darcy hires two "true believers" to shank each other and thus take the fall. It works and the cops are gone; the kids are not. They must be dealt with.

Even when in a rush Darcy remains a somewhat cautious murderer. Guns are forensic nightmares, having the potential to both contaminate their bar (obviously a front) and incriminate the owner(s). Firearms being out of the question, the bodies must also be placed somewhere else afterward. Clearly the gangsters have a long night ahead of them.

Darcy's an old fox, though. He gets inventive, recruiting "red laces": men who tie their boots with red laces, which mark them as assassins. One of these killers is a dog-owner, and though it is never explicitly stated, he seems the sort who'd breeds pit bulls to kill each other. This man expresses concern over losing his prize hounds; Darcy promises to compensate him, in that regard—provided they make their deadline. All of this is delivered in quick, sparse dialogue that spells little out, yet adds up. It sounds like how people would actually talk: without exposition (the sort that normally would be aimed squarely at those beyond the Fourth Wall).

Through the door of the room, Darcy orders Justin to leave; Justin can't, despite having the gun, which holds five cartridges—not enough to get all four kids, if they choose to rush him. Sure enough, they do and he's disarmed. Following this, Darcy encourages Pat, now holding the gun, to hand it over. He doesn't shout, but reasons with the lad. After some haggling they reach a compromise: give the gun, keep the bullets (world's worst plan).

Satisfied, Pat pushes aside the barricade and unbolts the door. As he starts to reach outside, Amber spots red laces through a vent in the wall, fastened low to the ground. Up to that point, she clearly knows more than she's been letting on. Seeing the tell-tale laces, she drops the act.

"They're killing us!" she cries.

Begin a cascade of violent dominoes. Pat's hand is pulled through the door and nearly cut off. Prior to that, one of the kids, knowing martial arts, has already had Justin lie on the ground, putting the thug in an armbar (to discourage any funny business during the trade). As Pat is being maimed, Justin resists; his arm is broken. He can't take a hint and is choked out—not once, but twice. The second time is meant to do him in. To be sure, the wild-eyed Amber guts him, lifting his sweatshirt and dragging an extended box cutter across his hairy stomach.

When I saw this, I, a seasoned gore-hound, actually gasped out loud. Justin's curtain call is just that shocking and gross. Pat's injury is just as bad—perhaps a little too bad: they practically have to duct tape his hand back on, yet somehow he avoids bleeding out. Why? Because it's a movie and if you want realistic violence, go watch The Men Behind the Sun (1988). 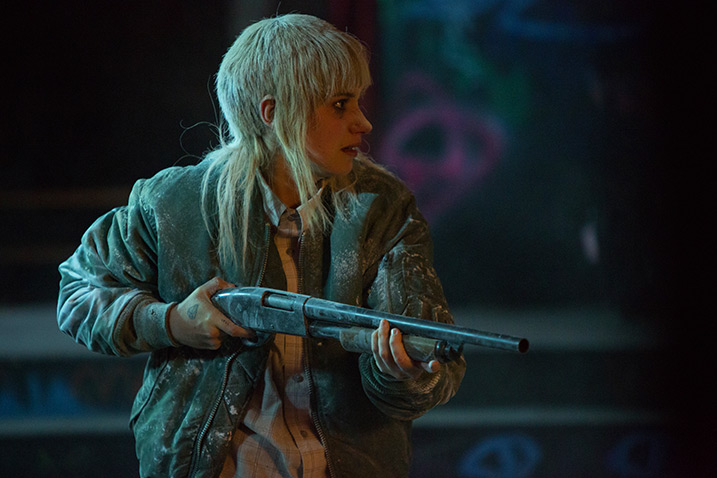 The rest of the movie unfolds like a deadly game of cat-and-mouse. Plenty of people die. Some good, some bad; I was kept on my toes throughout. Much of it felt plausible and grounded, without pulling any punches. Sometimes I squirmed, sometimes I grinned. Other times I thought, "Oh, that was clever!" (this doesn't always happen in horror movies, but does in Saulnier's). Meanwhile, woven into the plot is a fragmented, disjointed story of defection within the gangster household. It's not spelled-out, but the pieces are provided. One need only assemble them. To this, however, a second viewing of Green Room isn't simply recommended, but happily encouraged.
***
About me: My name is Nick van der Waard and I'm a Gothic ludologist. I primarily write reviews, Gothic analyses, and interviews. Because my main body of work is relatively vast, I've compiled it into a single compendium where I not only list my favorite works, I also summarize them. Check it out, here!
I'm an artist and a writer. If you're interested my work and are curious about illustrated or written commissions, please refer to my website for more information. If you want to contact me about a guest article, please use this contact form or reach out to me on Discord (vanderWaardart#5394)!