This three-part review is on Dominic Mitchell's In the Flesh (2013). For it, I will be reviewing season one, in its entirety.

Note: I've decided to divide the review into three parts, here. Part one will summarize, and focus largely on the positives; part two will criticize more deeply and explore any potential negatives; and part three will examine the thematic material more broadly. Also, the entire series is my homework, so I will inevitably get around to watching season 2. I will potentially review it at a later time.

In the Flesh is a somewhat different take on the zombie premise. It takes what I expected, in hearing the word "zombie," and turns it inside out—not in a gory sense, but an emotional one. At the same time, it still feels largely like a zombie tale in that it's occupied with survival—just a different sort than usual.

Rather than kick off the narrative in medias res, or "in the midst of things," everything has gone back to normal. That is, the apocalypse has happened; the war is over but humanity has survived. The problem is, so have the zombies. Clumsily rebranding them as "partially-deceased syndrome survivors," the British government is attempting to rehabilitate these persons—providing them with one-on-one therapy and group talks before medicating them, dressing them up and sending back to their families.

The clever part about the show is that these zombies are sentient people. They may be undead, but have since returned to a state of awareness previously denied to them, whilst running around the British cityscape, raising Cain. They're quite literally non compos mentis—legally unfit to be tried for their crimes.

Don't tell that to the Human Voluntary Force, though. These "true" survivors, back at home, never turned; they fought and killed their loved ones, during the epidemic, only watch helplessly as their own leaders let these zombies back in—the same leaders whose society was once terrorized by the undead they're now attempting to rehabilitate ("attempt" being the key verb, here).

Part of the fun to had, here, is in the satire, itself. It's uniformly excellent. The government programs responsible for this exodus are pressured to act simply because there's so many undead; they can't be housed. A shot early on in the show shows the protagonist going through a rigorous battery of tests. He's inspected, examined, and grilled; cleaned, injected, and pampered. By the time the doc gives him a clean bill of health, he's pushed out the door by the man, who calls "next" perfunctorily to whoever is next in line; consisting of other rehabilitated zombies, this queue winds endlessly into the background.

As Kieren Walker's clothes are thrust into his hands, my impression was more of him being an inmate than a patient. This was a prison of sorts, run by government employees less invested in "helping" the inmates than containing them (or profiting off them). And yet, due to budget and space constraints, the persons under the government's "care" must be "freed." Thus, they are liberated—released as indifferently and incompetently as they were nursed back to health.

All the while, their disingenuous caretakers smile half-heartedly at them, droning poorly-rehearsed segments of procedural jargon, lifted straight out of unreadable government pamphlets (on whose covers an undead woman's face is unwisely plastered). Looking after zombies clearly gives the government a sense of purpose, here. Yet, as an effective system, it utterly fails. The real purpose of their involvement seems lucrative, except the business model isn't sustainable, either. With "total euthanization" being politically suicidal, the only alternative is to release everyone out into the streets.

And that's exactly what happens. 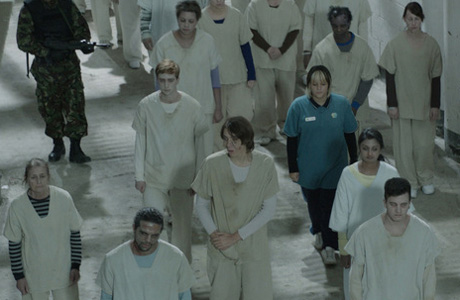 Granted, it's not total bedlam. Even so, there's a great deal of satire, here, much of it felt before Kieren even steps out the facility door.

It only continues when he returns home. His nurse blandly recites jargon at the Walker family before pleasantly bending Kieren over the couch and sticking a syringe (full of dark green goo) into his neck. "It won't hurt!" she chirps; and yet when she nonchalantly injects him, clearly it does: he rolls about, assuming something of an upright fetal position, while groaning in a less-than-human fashion. Everyone looks worried, except the nurse. On one hand, she's supposed to be calm—the government-supplied agent, intending to pacify the traumatized family back into a normal state. In the end, though, she's just going through the motions, seems only to be in it for the paycheck.

As the show moves forward, it also has a great deal of fun with the idea of resurrection. What would happen if someone you killed came back—better yet, someone who committed suicide? All the things you wanted to say to them (or wanted to avoid discussing outright) would be forced to be said (small-town life doesn't allow for modest luxuries like privacy or personal space).

Thus, Kieren, to his family and "friends," is hardly just a heaven-sent second chance; he's also a problem, an enigma. They can't see him without seeing what he once was, what he once did. As such, there's only so long things can be viewed as normal before the white elephant in the room is inevitably broached. Likewise, the hero is simultaneously reliving much of the same bullshit that lead to him committing suicide in the first place. Both devices allows for the tension to build, catalyzing much of the story's action in a way that makes sense. Once you get past the outrageous notion of the protagonist being a zombie, everything else falls neatly into place. Simply put, it works.

However, as stated, the show isn't perfect. In part two of my review I'll discuss some of the show's negative qualities.
***
About me: My name is Nick van der Waard and I'm a Gothic ludologist. I primarily write reviews, Gothic analyses, and interviews. Because my main body of work is relatively vast, I've compiled it into a single compendium where I not only list my favorite works, I also summarize them. Check it out, here!
I'm an artist and a writer. If you're interested my work and are curious about illustrated or written commissions, please refer to my website for more information. If you want to contact me about a guest article, please use this contact form or reach out to me on Discord (vanderWaardart#5394)!