Episode one ended with Bill ostensibly being dragged to his death. Episode two picks up where it left off, suggesting some kind of impregnation before letting Bill go. In short, he's the new spy, but he's already at odds with the Party and completely ignorant to what they've been through—the perfect host for this alien threat. On-screen, he drives to a phone booth, only to have the call interrupted by a sudden storm. Presaged by magenta lightning and roiling thunderheads, Bill comes face-to-face with a clone of himself. Pretty Gothic! 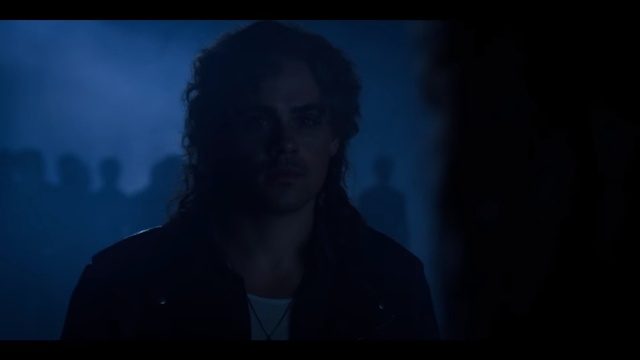 I wish we'd get a whole episode of this, like how "The Lost Sister" was self-contained. Alas, post-credits, we jump to Eleven, who's waiting for Mike; Mike, under Hopper's power, has to lie about his grandmother being sick. It goes over about as well as it did with Ed Rooney. Looking a bit like Ed, Hopper snacks on his Smacks cereal, looking smug. Mission accomplished? Part of the fun is not knowing exactly what's going on, while still having the gist.

This extends to Joyce, who thinks Hopper actually listened to her (when, in fact, he "improvised" a bit). She's skeptical, as are we. So, he tries to push for a date/not-a-date. This seems equally disingenuous, but he manages to secure a tentative "yes" after a bit of awkward haggling. Harbour's body language, here, is great (especially his answering the walkie-talkie the wrong way). He's much less wooden here than in season two, where he had almost nothing to do but stare and call people "kid."

Meanwhile, weird shit goes down. For example, the magnets in town stop working. There doesn't need to be any reason for this, anymore than there was when the clock stopped working in The Exorcist (1973). Something's amiss, though, and there's danger signs. What do they mean? Who knows, but it's probably bad. Hawkins doesn't have the best track record.

Nancy's at the phone pouring coffee, and Jake Busy's character derides her, calling her "Nancy Drew." It might be an insult, but many characters in horror stories (often written by women) were detectives similar to Drew, herself. There might be a gender wall Nancy's struggling to climb; this kind of disparity was par for the course in novelized adventures where women had to handle the crises the only way they were allowed. Nancy has to lie to go track down a lead. She marches off, with Jonathan, in tow, looking like Peter Parker. She has a mad glint, a fire of the stimulated mind—a trope itself parodied by the likes of Jane Austen when she wrote Catherine Morland into Northanger Abbey (1817). 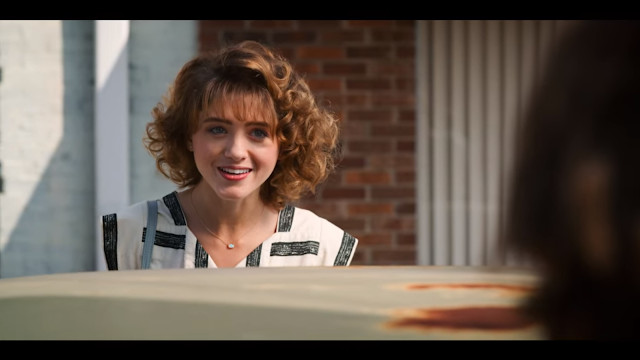 After another montage inside the mall, we see Dustin at Steve's workplace. The two exchange the world's weirdest secret handshake and then sit down. Dustin tells Steve about Suzie over a banana split; the dialogue between them is gold: "She says kissing is better without teeth" (Steve's reaction is priceless). "[Robin] seems cool." / "She's not." Good stuff. Then Dustin tells him about the Russians. The two are a bit lonely and dense, and need something to do. I suppose chasing after Russians is good enough.

While Dustin and Steve and planning to become Real American Heroes, Eleven is worried about Mike, and goes to Max for advice: "Boyfriends lie!" At that same moment, Mike is worried that Hopper has him on the hip and goes to Lucas for advice. Neither group gets anywhere, though it's likely Max is doing more harm by dishing idioms to Eleven ("Give him... the medicine."). Then again, Lucas has been dumped by Max five times, and now sees their relationship as a weird kind of game. The blind are definitely leading the blind, here.

Speaking of blind, Karen doesn't seem to understand what's happened to Bill. Not that she could. For that matter, neither do we: Our last sighting of Bill involved him confronting a clone of himself. There's no way to know which version of him we're dealing with, on-screen. His image is occupied by the human we know, and the alien we don't. This sense of unease involves actual false images: him "beating" Karen upside the head. However, Bill is suddenly photosensitive, too. He's changing. Is it into something else?

Cut to Robin at the shop (some slick editing with the sun-to-ice cream transition). She barges in on Dustin and Steve and tells them she can here everything they're up to go because they're both "extremely loud." They stare in horror, but she wants to help—because they're idiots, and she's bored. Elsewhere, Jonathan and Nancy arrive at the lead: an old lady's house. The owner invites them inside, leading them into a creepy basement. At first, the lead seems like a waste of time (rats eating fertilizer). Then, she has a surprise for them: a live specimen. 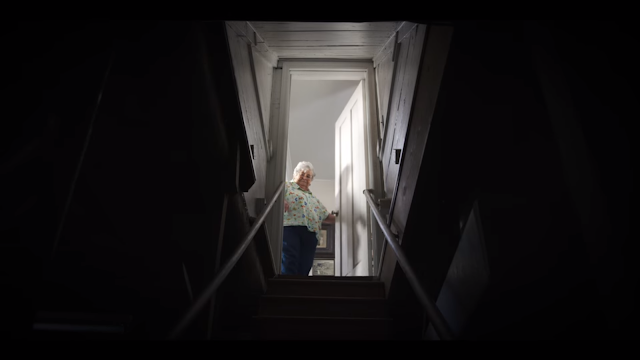 At town hall, Hopper goes to see the Mayor, Larry Kline. Played by Cary Elwes, I found myself thinking of Sawyer Crane, from Longmire (2012). Neither combo was amicable, and in this case, Kline is the paragon of late-stage capitalism. A portrait of Reagan sits, smiling blandly on his lobby wall, and he isn't too worried that his mall has cost the town its livelihood (also, I'm pretty sure he was visited by the Russian general's henchman before Hopper walked in, though I could be wrong about that).

Like the equally-deplorable major in Jaws (1975), Kline wants to throw a big, crazy party for the 4th of July. "It's all the voters will remember," he promises. He orders Hopper "to do his job," and the American anthem plays, similar to how the general's did, in episode one. What if the two men—the general and the mayor—weren't that different, but also were colluding, to boot? Sound familiar? Angela Carter once said, "We live in Gothic times." And maybe the Cold War never ended, either.

On that note, keep in mind how he movie the Party saw in episode one was Romero's Day of the Dead (1985). His earlier film, Dawn of the Dead (1978), used the American mall as set piece to critique society at large. The mall in Stranger Things serves a similar function. There's some heavy shit going down and nobody seems to remember anything but the mall—its kiosks, ads and fast food.

For the sheltered Eleven, this amounts to sensory overload. She stares around her in wonder. The boys are there, too. The stage is set for something to happen, and again, it's at the mall. Eleven goes shopping with Max, and here I think the show forgot Eleven's recent "punk phase." What happened to the hair grease, black clothes and corpse makeup? 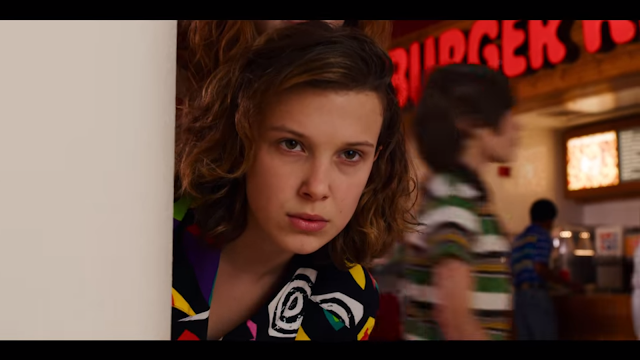 Speaking of something the show forgot, Joyce—reading up on electromagnetism (due to the "broken" magnets—pays someone a visit: none other than Scott Clarke! I loved Clarke in season one, but in season two he was practically none-existent. Here, he emerges much more fleshed out, with an ostentatious introduction that hopefully promises more of one of my favorite supporting characters.

At the old lady's house, Jonathan is shown, busily snapping photos. The rat looks normal, but behaves progressively stranger as the scene goes on. Eventually Nancy summons Jonathan. She's so eager to solve this case that she and Jonathan miss the underlying issue: The lights flicker and the rat transforms—that is, it explodes into a hideous pile of slime. Not unlike the 1986 Blob remake, the visual are pretty decent, and a bit gross. Not bad for CGI.

Cut to Bill, who remembers (for us) the events of his confrontation with his double. The spotless replica speaks to him in a deep, menacing voice: "I want you to build, to build what you see." Then, the sun brings him back to the present. It's literally burning his skin. Zombie-like, Bill stumbles to the public showers, and eventually is found by the Linda Barrett lookalike. When she speaks, the voice is not her own; Bill is hearing the voice of the monster inside him (a shape that flashes across the screen like Pazuzu). He snaps out of his reverie long enough to realize this, and lunges at the girl. Unlike Karen, who we "imagined" being attacked by Bill, I suspect this attack actually occurs.

The editing here is seriously on point. 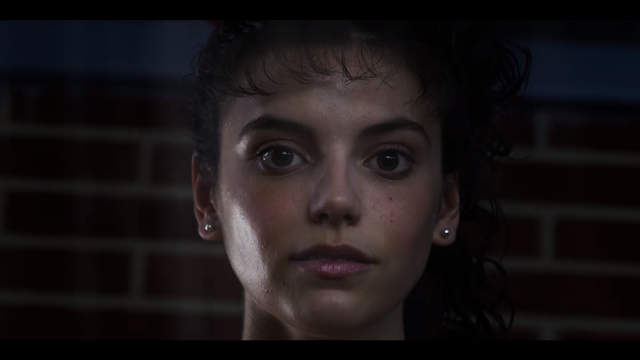 As usual, the show juggles the serious with the silly. As Bill conducts what is most likely his first abduction, the now-divided Party is at the mall, shopping. Eleven and Max try on clothes to Madonna's "Material Girl" (1984); the lads gawk at jewelry, panties and perfume. Will just wants to play D&D. Then, Eleven spots him, catches him in a lie, and "dumps his ass" to Foreigner's "Cold as Ice" (1977). I'd say it seems a bit on the nose, but I've seen nosier. For example, my partner's been having me watch JoJo's Bizarre Adventure (2012). Not only is that anime an adaptation of the manga that proceeded it; the music it transparently pays homage to is referenced with equal nudity in Stranger Things.

Elsewhere, Hopper arrives at the restaurant for his date, orders his drink(s) and waits. Frankly the relationships are pretty shallow—be they Mike, Lucas or Hopper's. It's feels like slight of hand to distract the viewer from even stranger things that are afoot, the normal world invaded by the profane. To that, Mr. Clarke explains the science of magnets to Joyce. He's excited by the possibility of a mysterious variable; she's not. I really, really hope there's more Mr. Clarke in this season.

At the mall, after everyone's gone home, Steve, Dustin and Robin close up shop. They've translated the Russian. Surprise—it's in code-speak. However, in passing the quarter-ride mechanical horse, Dustin and Steve recognize a mysterious song from the tape recording. It's the same song as this horse's. The transmission came from Hawkins, not Russia! To confirm this, Hopper leaves the restaurant, having been stood up. He drunkenly bumps into a man at the bar—the man who left Kline's office earlier. Sure enough, it's the general's right-hand man. Called it! 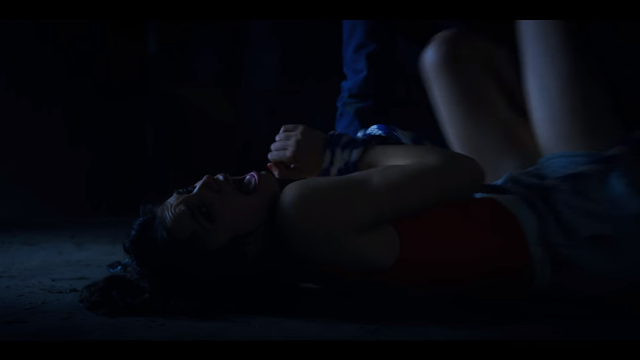 The episode closes out with Bill, having abducted the girl (also called it) and taken her back to the site where he, himself, was traumatized. If you've ever seen The Faculty (1998) or Invasion of the Body Snatchers (1978) then you'll know what to expect, here. However, they mostly hide the monster behind smoke, this time, and when we do see it, we're given a glimpse of its true size before the camera pulls away.

For once, they hid the monster correctly. Thank god!