July 06, 2019
With the advent of Stranger Things 3 (2019), I wanted to finish reviewing season two's episodes before moving onto season three. Here are my thoughts on episode seven. Spoilers!

The episode starts with Eleven, who visits her catatonic mother. The two "bond," telepathically, and Eleven experiences a vision. The vision has a nursery of sorts, where Eleven sees another girl. The vision ends, whereupon she asks her mother's caretaker who this secret person is—apparently another child, abducted from its mother. 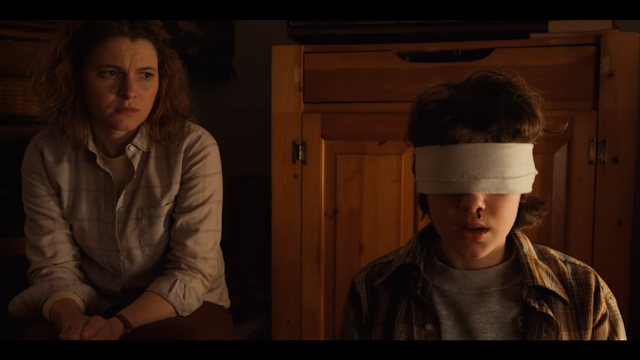 When initially exposed to season two, I remember thinking how strange it was that Eleven could access the dark zone—not the Upside-Down, but the black void borrowed from Under the Skin (2014)—without a hyperbaric chamber. In season one, she needed the chamber, either a "fancy one" provided by Brenner the G-man and his goons; or a jury-rigged variant strung together by Mike and the lads. Not so, in season two. I suspect the reason for this change is that Eleven is either out with Hopper in the woods, or by herself. Access denied, so the character had to evolve.

...Except, they never show this evolution, or even acknowledge it. Suddenly what took a considerable amount of difficulty is swept under the rug in favor of a much more convenient method (apart from Eleven getting nosebleeds). This might make it easier for the writers, but it doesn't do much for the story. Even if Eleven can do all of this, until now she's been largely pushed to the side, while Hopper gets trapped, rescued, and finally reduced to the muscle of the townsfolk committee versus the science board. The kids and the teenagers form love triangles, and bicker a fair amount, but very little has actually happened so far.

But this is all before episode seven, and I want to give it a fair shake. Going in, my questions are, where will Eleven's delayed insight take her, and who is this mysterious psychic we saw in the very first scene of season two? It's hard to feel for a character they introduced later into the story and only for a single scene. Then again, it's something for Eleven to do, and the camera's pointing at her... Alons-y!

Mystery girl disappeared from London, according to her file. Eleven can't seem to track her using her powers, but she has the photo. And to its credit, the episode sticks with Eleven, instead of ditching her after one scene. She gets cold feet after the woman at the house calls the authorities. So she grabs some money and bails. But after the credits rolls, we're still with Eleven. This is good. 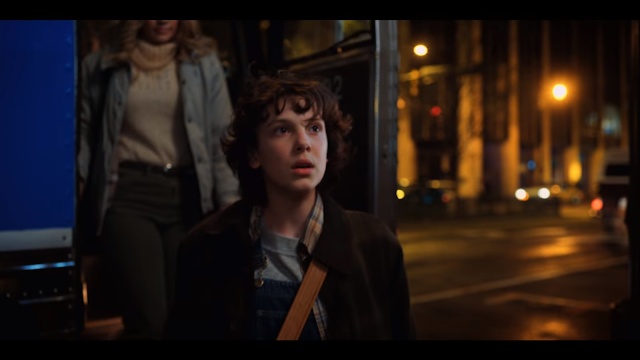 When "Little Runaway" starts playing, I feel the "music video" approach coming on again. Season one used music at times. Season two seems to do it with more of a wink. The music is effectively a count down for the next Important Thing to occur. As soon as the music stops, something will happen. Sure enough, as soon as the singing fades, Eleven finds her "sister." Her name's Kali.

Kali's not exactly tall. In fact, she and Eleven are the same height. But she is older. Her number is eight, which might explain the age difference. "Are you real?" As real as Lo Pan! I do like that their powers are different. The two go upstairs to talk. However, Kali starts to cry, which makes me feel as I did when Max and Lucas started to bond—rushed. It's happening a little too quickly. Yes, this is the seventh episode, but Eleven has largely been off-screen, say nothing of Kali. But, to its credit, the episode asks us to stick with it.

The predicament is obvious enough: Kali's a vigilant, and Eleven isn't. I suspect the whole Oliver Twist subplot is going to fall apart pretty fast. It could be a foregone conclusion, but the bigger problem isn't the transparency so much as how brief it all feels. It has very little to do with Hawkins and anything going on there. And it doesn't seem to explain anything new about Eleven.

To be fair, Eleven's powers have clearly evolved, and not just with how she found Kali. Hopper's radio confession makes its way to Eleven because suddenly she's Omniscient. There's no need to arrange the information to be brought to her. She just knows. It's a little lazy of the writers, and works better under the presumption that Eleven is simply growing stronger. The problem is, she might technically be older, but still looks the same. She hasn't grown up yet. And that's kind of the point of this episode. 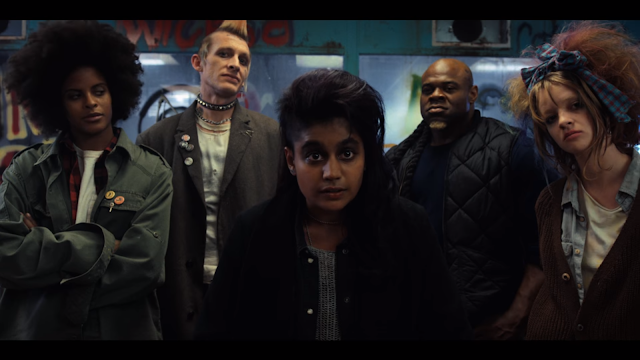 Eleven has to be challenged. The problem is, she's killed before, so even this isn't much of a temptation for her. So why is she here? What does she have to gain or lose? The Skywalker bit with the train car seems to imply a dark inversion of the Heroic Quest. Eleven is exploring her destructive potential via her telepathy. "Find the anger, focus on that." Basically Kali is Eleven's dark mentor. Meanwhile, the others whoop and cheer her name, making her feel accepted.

Meanwhile, Kali is constantly introduced by musical stabs, her image either coming in from off-camera, or slowly turning around during a dream. It's an attempt to convey something menacing about her while also holding it at arm's length. Though not narratively important, Funshine (the "warrior" of Kali's band of outcasts) is played by none other than professional bodybuilder Kai Greene. Cool; I grew up on Arnold Schwarzenegger films, so I can appreciate bodybuilder cameos in sci-fi/fantasy stories.

After this, Kali shows Eleven some photos—to the OST of John Carpenter's Escape from New York (1980)! I love that score, and here, the trashiness of Kali's hideout feels like an extension of Carpenter's nightmarish cityscape. There's something magical about that music; it makes anything onscreen a little better (and calls the viewer back to the past of older movies they might want to watch, later).

The crew move out, but not before transforming Eleven into one of them. They oil her hair back, and darken her eyes. She's a regular Joshua Miller—walking with the pack, jamming out with them to The Runaways while playing with masks (she doesn't seem to realize what they're for). They rob a gas station, during which Eleven knocks out the clerk. For some reason the cops show up before they're called, and the gang splits. In their rush, they forget to remove the fuel nozzle, tearing the hose out from the pump as they drive off. Opps. 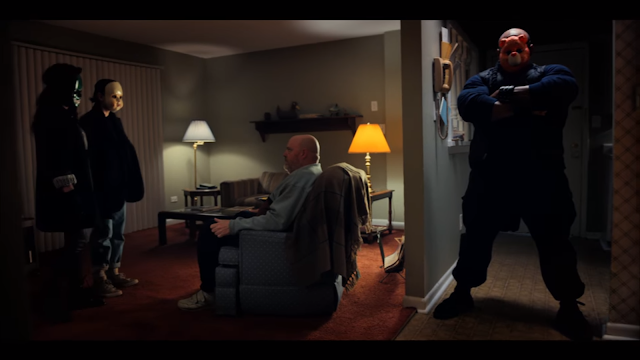 At the mark's resident, Eleven "cases" the joint with her mind powers (this time to the musical refrain of John Carpenter). The man inside watches TV while his killers unlock the door from the outside (a handy trick). I love the photography during this scene. There's enough lamps in this dim, crowded room to given David Fincher an orgasm. Meanwhile, the vigilantes shake the bald, fat man down (a bad thing to be in a horror film). As they do, he pleads with them, saying he only did what Brenner told him to do, and that Brenner is still alive!

This is the plot-twist. Then, Eleven straight up force chokes the guy (while Kali urges her to do it, no less). However, we quickly learn that the evil henchman has kids... and they've called the cops. This Trolley Problem isn't unique to this show. For another horror movie where the moral system of two "families" causes the hero to chose between them, watch Near Dark (1987). The gang hightails it.

Back at their hideout, Kali convinces Eleven to stay by invading her mind as Brenner. Before Eleven can decide, though, she has a vision. Hopper and her friends are in danger! She can't tell what's going on, because they're basically figures in a crystal ball: solid, but against a murky backdrop. Convenient of her to have this vision right as the cops storm the place... Long story short, the gang gets away thanks to Kali (some "Professor X" shit). Even so, Eleven is haunted by Mike's cries, "It's a trap! It's a trap!"

So, like Luke, Eleven says goodbye to Yoda and goes back to save her friends. There's a visual coda at the end, too—with Eleven once again on a bus, staring out its rain-covered window at night. But now she's different, "sad and wiser." Nice. 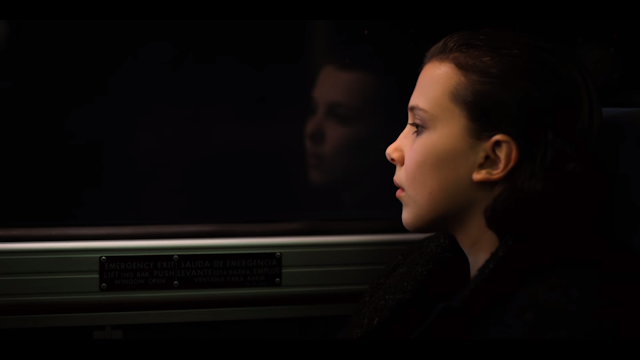 All in all, I started the episode off a little annoyed. However, once you take Eleven's newfound (and convenient) powers at face value, the episode gels nicely. There's no cross-cutting. The music is awesome, and there's some great camera, writing and editing tricks to make me appreciate everything on multiple levels. To be honest, the whole affair feels a little self-contained—I have to wonder what will become of Kali and her motley crew—and a little quick, happening over a single episode instead of an entire season. Accelerated development aside, I like the doubt and courage it sowed in Eleven's mind; she got her feet wet, but chose to be the superhero her friends can depend on.