July 12, 2019
As part of my ongoing Q & A series on "Alien: Ore" (2019), here is part two of my three-part interview with the film's composers, Rose Hastreiter and Gerry Plant of Leonty Music.

In case you missed it, read part one.


Nick: What are Kailey and Sam like as directors?

Rose: By far some of the best I've had a chance to work with. They understand the power of music in telling the emotional story—the story that is not in dialogue and exposition. Therefore, their creative direction and our creative discussions are always in-depth; they helped direct us, much like you’d expect them to direct actors: towards revealing the emotional quotient of a scene. They challenged me as a composer to help uncover more [emotional] depth, and I particularly like how they provide genuine constructive feedback throughout our process.

I think by this stage, we've created a safe communication space, through which we [can] remove ego and serve the story the best. So when I work with [the Spears], I never feel the need to defend a choice; I adore how they give us the freedom to use our voices, but also help ensure clear direction on [a scene's emotions]. I lean on them more than other directors because I know—when they hear something that we’ve scratched out for them, and it resonates with them as storytellers—then we're making progress.

So, it's been a pleasure to work with them—especially because their feedback cycles [have] allowed me to grow as a composer. I [also] adore working with them because I know by the end of our detailed efforts, we've collaborated as storytellers. With my background in theatre, I feel I can connect to them better because we're [each of us] trying to "hear" the emotion in a scene and understand it from the [characters'] perspectives, too. [editor's note: Theatre-wise, Kailey and Sam are actually Shakespeareans, which you can read about, here.] 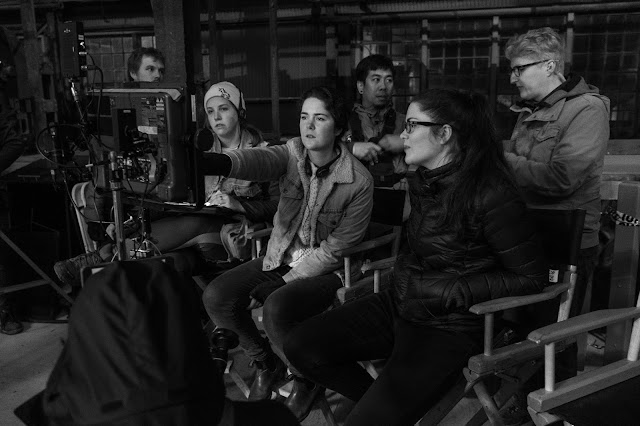 Kailey and Sam Spear, on set (courtesy of Greg Massie).

Nick: How did you both feel when being invited to work on an Alien film, together?

Rose: It's frikkin' Alien! What’s not to love?


Nick: Were you excited, nervous?

Rose: Wasn't nervous—usually, haha! The only fear we held was "Is Fox going to rewrite everything we did?" Completely unfounded, I know, but these are the types of crazy-cat thoughts do occur during a project, [especially] after working solidly on this for two months (combined with lack of sleep and showers and eating whatever was at hand to get through sixteen-hour marathon sessions in our studios). I suppose I over-compensated a little, was slightly OCD on this one; we wanted it to be as good as possible. Considering how much we loved this story and that it was such a visible project, we put in extra effort and detail.


Nick: Did the fact that Kailey and Sam Spear were directing help put your fears to rest, given you've worked with them, before?

Rose: We were both very excited to be asked to write the music—we loved their story and knew we'd love working with their team. 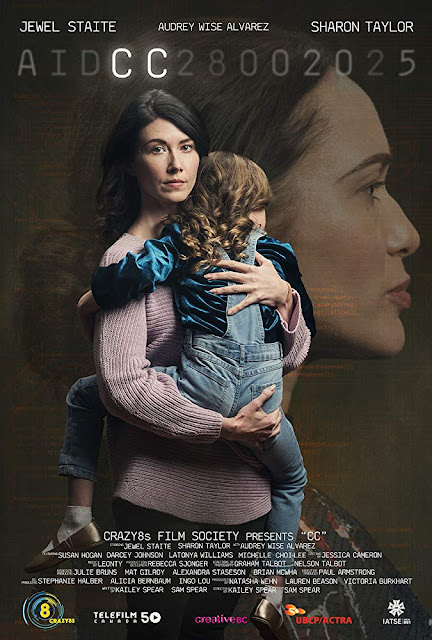 "CC" (2018) is another project of the Spears' that Rose and Gerry both worked on.

Nick: Did Kailey and Sam come to you with specific instructions—e.g., did they want their music to sound like a given composer (Jerry Goldsmith, for example)?

Rose: They gave us a huge amount of freedom, but we did have discussions around paying homage to the original (considering the timeline is [the] same). We discussed the concept of a hybrid score (synth and orchestral together) early on.

Gerry: We had discussed aspects of Goldsmith's approach that could be appropriate while respecting and supporting the different environment that "Ore" takes place in.

Nick: When working on the score for "Alien: Ore," did you have access to any material from the original production, courtesy of Fox?

For example, when developing Alien: Isolation (2014), Creative Assembly were given a "master file," which included musical data from the original, 1979 film. [editor's note: For more information on that, read this interview with Joe Henson and Alexis Smith from The Flight, the production group tasked with producing that game's music.]

Rose: Nope. That'd have been cool. But we also cared about bringing a fresh perspective to the music, while still paying homage. So in this case, we did a deep study of the original score. We realized, early on, that this storyline needed a hybrid approach, and that we didn't want to land too bombastically on the score. [editor's note: Goldsmith's original score featured a lot of Romantic elements and elaborate musical moments.]

[We opted for a] more modern and subtle approach, but [included] a little bombast. If we do our job right, the score isn't actively heard (unless the scene demands it). Rather, we wanted the score to be "felt" as part of the audience's visual experience. So, we try to [support] the emotional quotient of a scene without getting in the way of dialogue or sound design elements. Tricky.

Nick: During the project, did you decide to consult, or work with, any original musicians or composers from the older films?

Rose: We didn't have an opportunity for this. If we were to be asked to do an Alien feature, we'd love an opportunity to consult with anyone who worked with Jerry Goldsmith on the original—to pay some homage to where it [all] started.

Nick: After being hired, how much time did you have to research and brainstorm before starting the writing process?

Rose: About one month prior [to writing anything], we began the official "spotting" sessions with the Spears, and began designing "scoring sounds" and synths for [our] hybrid score. This process began in early November, and ended in mid-late January. We spent approximately three months on this one—with the production and recording efforts in December and through the holiday season, and final sync edits, mixes and delivery prep (with a couple quick final edits) in January.

Delivery of the score to the post-production and sound mix team was by mid-January.

Nick: When composing your music, did you listen to the original score(s) while composing and draw inspiration from them?

Gerry: Definitely. We listened to the original and drew a couple of things from it (most notably the piano and harp hit echo, on my end). 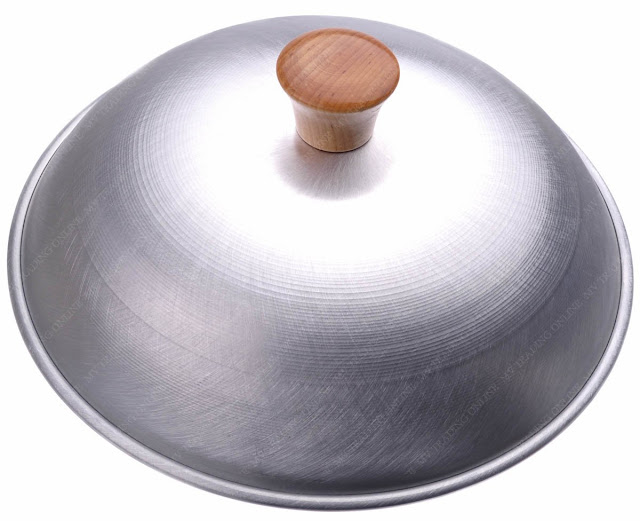 A wok lid (not the actual lid used by Leonty Music).

Nick: During "Alien: Ore," I noticed a segment that sounded like Goldsmith's Freud (1962). That score had been used by editor Terry Rawlings when editing the original, "silent" cut of Alien, and everyone liked it so much they decided to keep it in the movie. This includes the acid scene, which your music reminded me of.

Were you trying to emulate Freud, in "Alien: Ore," "nodding" to its adoption by Scott, in Alien?

Rose: No, this wasn't even on our radar—we'll look it up!

Nick: At times, your score resembles the ambiance heard during the original, 1979 trailer. Was it a conscious decision to have a more "ambient" sound to the score?

Rose: Yes. We also tried to use the ambiance of the mining environment as a major influence [for our score's emotions].

Gerry: Definitely. An ambient approach supported the mine environment best (we thought). 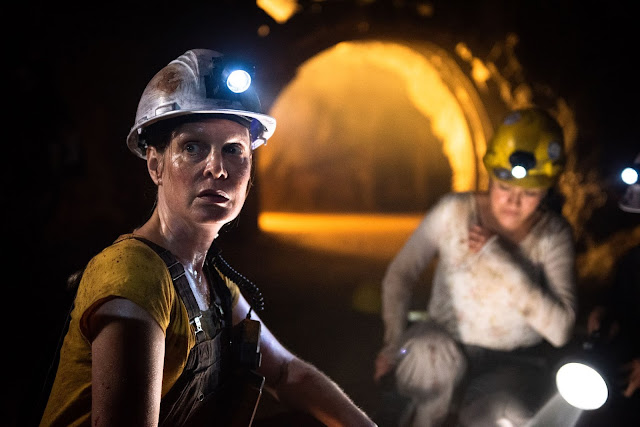 Mikela Jay inside the mines (courtesy of Suzanne Friesen). Alien made use of ambient sounds that "fit" the look and feel of its various environments, but also supplied them with additional effects (animal sounds: breathing and heartbeats, etc).


Nick: When working on Aliens (1986), James Horner reportedly only had six weeks to write his score. How much time did you have to compose your own work, on "Alien: Ore," before having to record?

Rose: We allocated plenty of time on this project, and blocked it off on our work schedule so that we wouldn't feel too rushed—four weeks [for] the core work, but an additional four weeks [for] scratching out ideas.

Nick: How did that go?

Rose: We'd move [it] into more of an arranged piece, meet with the Spears and make sure we’re on track before moving [into] official production mode. Then, we'd have to blend both of our composition stems into one piece, maybe have to create a new sound, and [experiment] until the whole team was happy with it. We reserved our stem mixing until final approval from the Spears.

We were waiting on this until the end. Then, we mixed down all our tracks—a hundred tracks down into about twenty—and created all the stems to be remixed by the final post-production mixer. So although we had a reference as to what we'd like to hear [in the final product], we delivered the [finalized] stems to the post production teams, [who helped deliver] the final product [too].