July 09, 2019
With the advent of Stranger Things 3 (2019), I wanted to finish reviewing season two's episodes before moving onto season three. Here are my thoughts on episode nine, "The Gate." Spoilers!

Eleven arrives; she and Mike embrace. But then Mike learns that Hopper has been hiding Eleven in secret in order to protect her. Despite her strength, Hopper argues, the more people know about Eleven, the more danger she's in. Mike's not having it, and tells Hopper what he really thinks. And to that, Hopper replies, "Sorry, kid." Everyone else touches base; Eleven ignores Max before checking on Will, who's out cold. Then Joyce asks Eleven help in closing the gate. 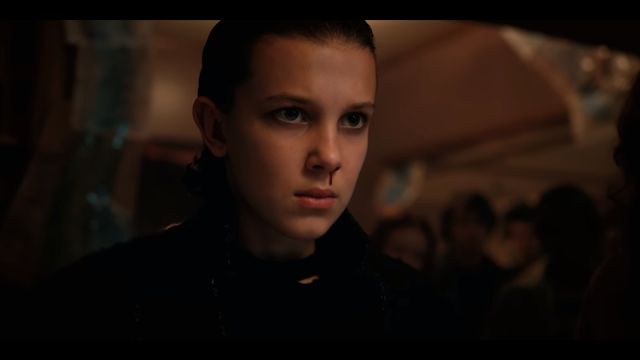 Cut to Nancy's mother, Karen. She's in the tub, reading a Harlequin Romance by candlelight. When her husband, Ted, fails to answer the doorbell, Karen rushes down in her bathrobe. Bill is on the other side, all smiles. He tells Karen he's looking for his sister, Max. Flustered by the attractive young man, Karen invites him inside, and writes down where Max probably is. There's a bit of flirting and Bill leaves; Karen watches him go with hungry eyes.

Back at home base, Mike and the party debate what's best to do, next. Eleven is bent on helping close the gate. Mike worries doing so might kill Will: "Kill the brain, the body dies." It sounds a little flimsy to me. Will isn't a monster, he's possessed by one. Wouldn't closing the gate simply release the Flayer's hold on him?

Speaking of which, the party opts to exorcise the virus. It likes the cold, so Joyce votes "to burn it out." Jonathan is tasked with taking Will far away to conduct the ritual, and letting Hopper know by radio once the deed is done. The group prepares to leave, and feelings run high. Steve tells Nancy to go with Jonathan, but doesn't know she's cheated on him; Nancy is guilty for having done so, but hasn't the heart to tell him, either. Mike and Eleven almost kiss, but Hopper interrupts them. There's no time for such matters, no when the future of the town is at stake! 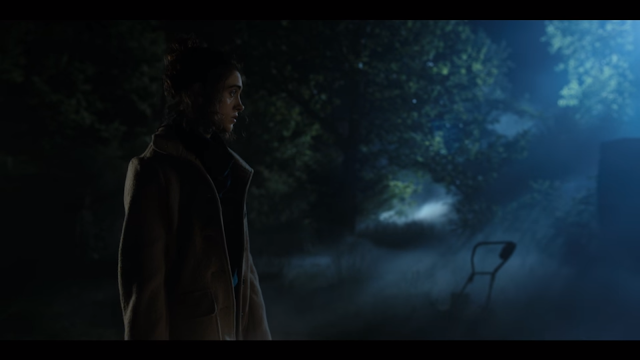 While Mike, Lucas and Max watch helplessly as the combatants sally forth, for the soldiers—Hopper and Eleven—there's time enough for a heart-to-heart, en route to the battlefield. It goes on a bit longer than I'd like. I also found myself considerably bored. Had Hopper's status as a bereaved father been made the focus early on, then I might have cared more. But the explanation—of Sarah being Hopper's girl—almost comes out of left field. Why they waited so long to mention her again, since season one, I can't begin to fathom.

I digress. Steve has his hands full, at the Byer's place. Mike and Dustin hatch a plan to exploit the demagorgons' hive-mind nature and lure them away from the lab. Steve is unhappy with this; the plan requires pinpoint precision, but also involves relying on crayon blueprints drawn during a demonic fever dream. They could all die, and he told Joyce he'd keep them all safe... on the bench.

Then, Max's brother shows up.

Here, Steve runs interference. After Max pushes past Steve, the events that follow mirror Bill being abused by his father. He throws Lucas against a wall and threatens him. Lucas hits him, and Steve steps in. A few punches are thrown. Something of a masochist, Bill lets Steve beat him. Then, Bill mounts Steve and pummels him, clearly the dominant fighter. So Max injects him with Will's sleep medication. While he's still awake, Max threatens Bill's balls with a nail bat: "From now on, you leave me and my friends alone!" 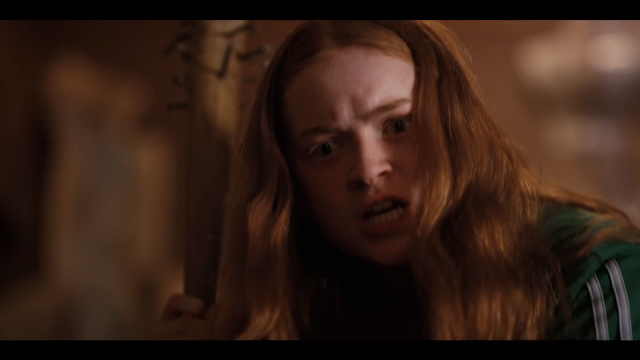 With both teenagers out for the count, Max, Lucas and Mike take Bill's car. Jonathan, Nancy and Joyce prepare to exorcise Will—at a cabin, with several heat-lamps and a fireplace:

"Are you sure this is a good idea?" Jonathan asks.

"This thing has had Will long enough," Joyce snarls. "Let's kill the son of a bitch!"

I'm confused. Why would releasing the demon kill it at all? Why can't it leave Will's body of its own accord? The thought of it dying to heatstroke because it got stuck in a human vessel seems a little ignominious.

Eleven and Hopper arrive at the lab. Eleven hesitates; for her, this lab is a site of trauma. Facing the actual demons, she will, in effect, be confronting her own. Mike, Lucas and Max are on their way to the tunnels... with Steve in tow. He rouses from his beaten torpor ("He kicked your ass, but you put up a good fight!"). All of them bicker as Max struggles to drive. Eventually they get there, and head down into the poxy earth, below. 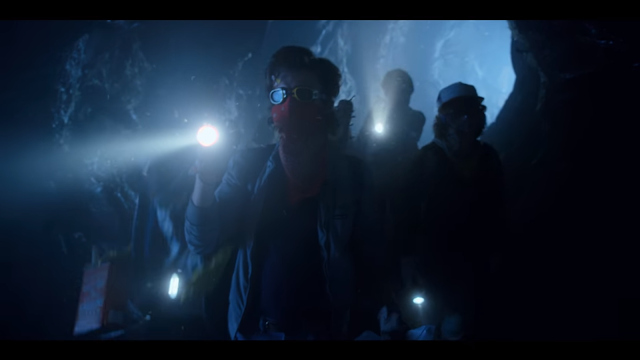 As is usually the case with multiple parties, there's cross-cutting. At the lab, Hooper and Eleven find Owens, who's injured, but still alive; Steve and the lads navigate the underground (to be honest, I'm not sure how they can see anything through their goggles, let alone read and use Mike's hand-drawn map); Joyce, Jonathan and Nancy exorcise Will by overheating him; Hooper and Eleven see to Owen's wounds, and then carry onwards;  Dustin encounters a ceiling "sphincter" straight out of Evolution (2001), which "farts" particulate into the air... and Dustin's mouth; Will freaks out and begins to strangle Joyce.

Eventually the Flayer leaves Will's body. You'd think it would have ages ago, considering its lingering presence only served to distract it from the actions of the other party members (and made it unable to spy on them). So why did it stay inside Will? It wasn't using him as a host, and it continues to survive outside of him, once exorcised.

All in all, the machinery of the plot makes things a bit of a snooze, visually. Early on, Hooper never fires his gun, and Eleven does nothing but stand there, looking worried. When the time comes, the two of them share an elevator ride downwards. Dangling in mid-air, Eleven holds out her hand and uses Kali's teachings to close the portal. This might check her narrative box for Having Learned Something. However, there's little to actually see. Apart from a double nosebleed, Eleven hardly breaks a sweat. Action-wise, Hopper plugs a few demagorgons, but it feels pedestrian. The whole ordeal is about visually engaging as Ken Marshall squaring off against the Beast in Krull (minus the charm of that movie's hokey visual effects, or its awesome weapon). 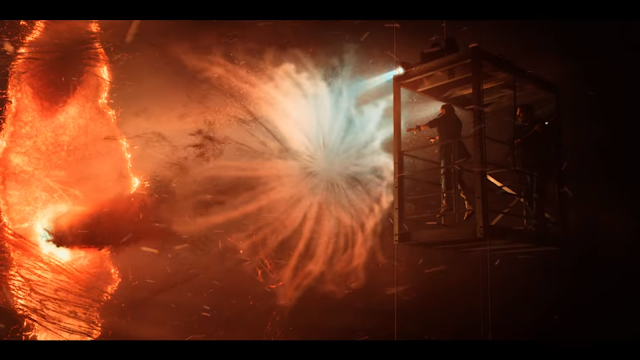 When Bob tried to save the others, he did so at great risk to himself. There's suspense leading up to his death, which hits hard. Here, nobody human dies. Nor were they ever in any real danger because Mike's theory about the Gate was correct. As soon as it closes, the monsters all perish. Until this happens, the Flayer's army really are like dogs: chasing a bone they never seem to catch. Meanwhile, the lads underground only face Dart, who eats candy bars; otherwise, the tunnels are literally empty.

After the Flayer is denied, the last eighteen minutes are effectively the epilogue. And here, the sheer magnitude of excommunicating a shapeless alien menace is eclipsed by the love lives of tweens. The fact that the show rushes its own climax in favor of something so mundane is a bit of a puzzler. I'm not sure what the writers were shooting for other than to check every last possible box. Then again, I enjoyed Dustin as the odd man out, during the dance. There's a sense of rejection to make things seem a little bittersweet—always a winning combination with a novel of manners.

This being said, the "twist" at the very end is pretty dumb. Why wouldn't the shadow monster still be alive?
***
About me: My name is Nick van der Waard and I'm a Gothic ludologist. I primarily write reviews, Gothic analyses, and interviews. Because my main body of work is relatively vast, I've compiled it into a single compendium where I not only list my favorite works, I also summarize them. Check it out, here!
I'm an artist and a writer. If you're interested my work and are curious about illustrated or written commissions, please refer to my website for more information. If you want to contact me about a guest article, please use this contact form or reach out to me on Discord (vanderWaardart#5394)!