A Mixed Bag: The Shortfalls and Saving Graces of Stranger Things 3 (Spoilers)

July 16, 2019
This article covers some of my problems with Stranger Things 3 (2019) and one of my favorite moments. Spoilers!

Stranger Things 3 is uneven. In short, episodes one, two and three are solid horror. After that, it's a mixed bag. There's much to appreciate, and much to criticize. I'll start with the latter...

Season three continues many problems I've had with the show to this point. For one, its cast is a bit too large for its own good, and contractual obligations make it impossible to kill any of main players. Hopper's "death" is frustratingly noncommittal. Off-screen, the maker's hide it behind the splattering of so many disposable Russian scientists.

The only main player to bite the dust is Bill, a casualty from episode one who spends more time off-screen than on—so much so that his development occurs entirely by Eleven invading his mind. There, we get a mess of smokey images. Whenever he's in a scene, Bill is largely mute, or flexing through a tank top like Marlon Brando. The Party are always searching for him or avoiding him, with no chance for conversation. 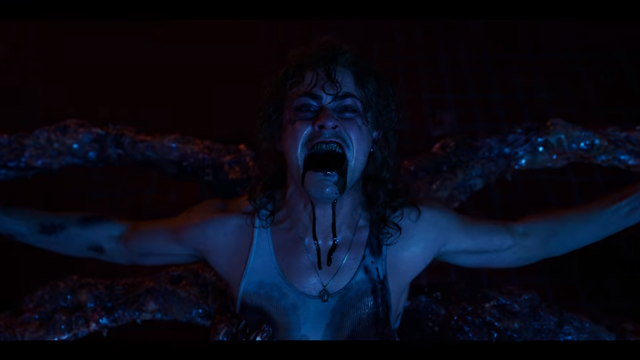 Bill confronts the Other.

This being said, I appreciated Bill's actual demise. Eleven knows Bill's intimate side. So she appeals to his humanity (through largely unspoken telepathy). He responds by facing the monster, staring it down much like Morbius did, in Forbidden Planet (1956; "I deny you, I give you up!"). It's traumatic for him, to say the least. An primordial destroyer, the Flayer holds Bill in place, paralyzing him before dispatching him with a second mouth. How Alien (1979). I wonder why it bothered, when it could've melted him into goo, like everyone else.

That's another issue. There are notable improvements in the monster effects department, but the show's makers still don't know what to do with them. The Flayer has many different forms and abilities. There are advantages to having multiple forms; they can throw and keep the audience off-balance. The problem is, the Flayer—not the Party—is constantly disadvantaged by its own repertoire. 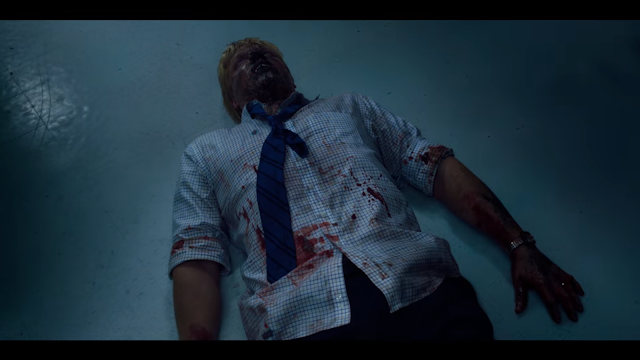 The slasher, zombie apocalypse or alien invasion all allow the viewer to engage in "wish fulfillment," an exploration of our darker desires. Jake Busy's an asshole; Nancy hates him. If only she could brutally murder him and get away with it...

For example, when the Flayer possesses the townsfolk, the smallest injury hurts the entire organism. The Thing disliked heat, but could otherwise take whatever you threw at it. Same for the T-1000. Strike one Flayer zombie and all of them recoil. The pain paralyzes the whole, nullifying the Flayer's strength in numbers. To compensate, the Flayer often uses singular, brute strength. Bill is strong and fast, and he works alone. However, Eleven's mind powers are more than a match for Bill, and she throws him through a brick wall.

There's a catch. The more Eleven uses her powers, the weaker she becomes. Meanwhile, the monster grows in size; it abandons its human form, turning most of the (nameless) townsfolk into mush. Yet the writers continue to hamstring the Flayer. They not only give it too many weaknesses; they have it switch tactics and forms to its own detriment. Godzilla-sized, it traps the Party inside Hopper's house. It doesn't crush the house, like Godzilla would; it opts for an craftier approach, using tentacles to "fish" for its prey like Spielberg's War of the Worlds (2012). 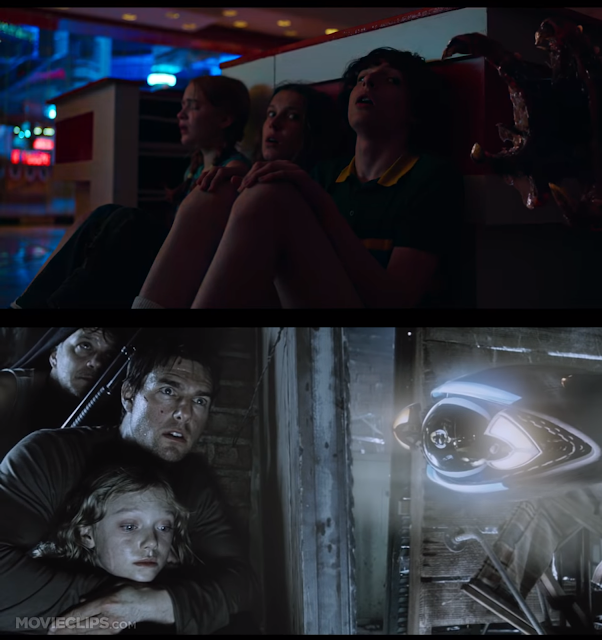 Scenes like these jack up the suspense, but also beat around the bush.

This only helps the Party stage their defense. Like Kurosawa's samurai, they handle the "bandits" one at a time. Changes like these allows the Party to fight on, helped by the script rather than their own clever minds. It grounds the Flayer, making it transparently vulnerable when it should seem invincible. Mysterious, intelligent, and ruthless, Bill's "dark twin" misleads Eleven and takes over the town; its "true form," the avatar, is incredibly stupid.

When Eleven loses her powers, the kids lure the Flayer into the mall. There, the monster is penned in, hampered by a building it cannot topple. The humans split up. They surround and confuse the monster with fireworks. The subsequent heat exacerbates its baffling weakness; injuring one end distributes pain evenly across its entire body. There are far too many checks and balances. This includes how the shape of the avatar affects its physical and mental powers. Bill is the cold, calculating matador to the giant's raging bull. The cat-and-mouse game is played with a laser-pointer.

A huge element of tension in horror stories comes from attrition. The heroes might win a battle or three; the monster whittles them down. That's the idea, but in Stranger Things 3, the costs of war are far too low. There's no unrelenting attack of actual danger. Bill doesn't steal a gun and start plugging brats; the Flayer doesn't come at them again, and again, and again. There's no nickle-and-dime approach, no foul play. A Party member (or their loved ones) isn't bushwhacked; the Flayer doesn't use the corpse's familiar visage to torment the survivors with. What kind of monster is he?

The Flayer not only fights fair. He holds back. There's no sincere attempt to actually hurt the heroes. A villain that toys with its prey long enough for them to counterattack feels really transparent. For example, the T-800 from Terminator: Genysis (2015) throws Kyle Reese across the room instead of pulling out his spleen, which feels like a lazy way to extend the scene. The feeling of danger is advertised by the monster, whose threatening aura disappears. This happens several times in Stranger Things 3—with Hopper and the Russian assassin, or Nancy and the Flayer. 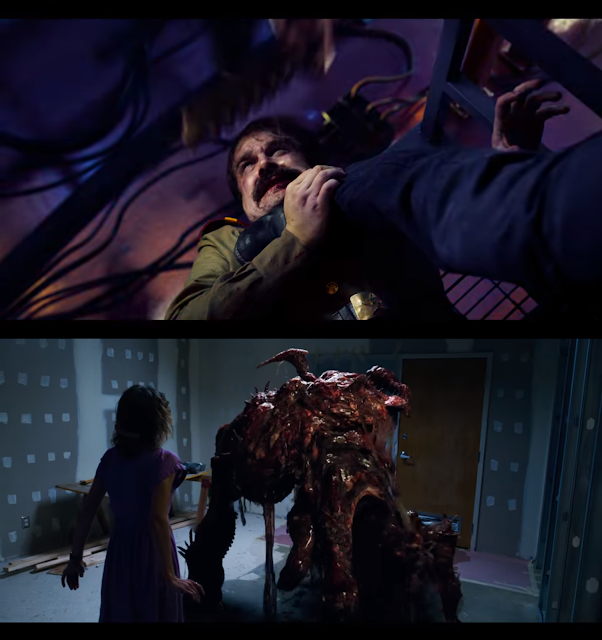 Trust me: The villains only appear to have the heroes "on the hip."

The assassin toys with Hopper just because. Unfortunately for him, this gives Hopper ample time to counterattack. Likewise, the Flayer is literally a walking weapon. Sporting rows of teeth and hellish brawn, it decides to simply throw her against a wall. It doesn't skewer, brain or maul her. She's all but guaranteed to walk away unharmed. In this vein, the monster could just poke her and let the infection spread. It doesn't even do that. A light slap and the heroes storm in, ejecting the beast from the premises. Lame!

Call me sadistic, but I would have preferred some actual bloodshed. Give me a heroine whose friends and family bite the dust; force her to look on the carnage. Here, nobody we know dies except Bill. The townsfolk are killed before our eyes, not the Party's. They have nothing traumatic to behold. There's no drama, no desperation. The whole ordeal feels safe despite the monstrous visuals. They're simply a facade.

Worse, much of the tension is bypassed in favor of a group narrative equally invested in Cold War adventure. Hopper and Joyce; Robin, Dustin and Steve—they're after the "banditti" of this Gothic tale: Russians. The Russians should have been a footnote, the explained supernatural. Instead, they hog the spotlight, robbing Hawkins of its everyday appearance. There's less to besiege because the suburban locales are swapped for well-lit concrete bunkers full of disposable storm troopers. Juxtaposed with the other story threads, the tone shifts are all over the place and do not mix.

Next, I want to talk about my favorite scene in the whole season: Dustin and Suzie's nostalgic singalong. 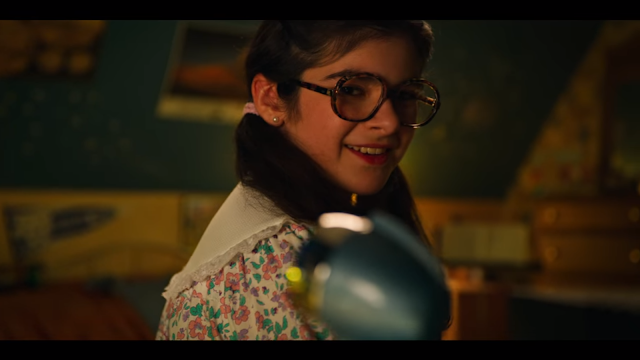 Suzie, a tricksy sprite if ever there were.

Stranger Things is as much about nostalgia as it is horror. At times, I feel like nostalgia takes the wheel, the horror elements ignored or underused. If they are in the show, it is purely to say, "Remember this horror movie from the '80s?" I wouldn't care, if the Duffer brothers tried to horrify audiences to the same degree. Instead, horror is simply nostalgic, not an act in and of itself.

It's with a certain amount of irony, then, that my favorite scene in the show is a purely nostalgic one. Then again, perhaps not. To be sure, there are horror moments I like, in season three; none are nearly as developed as the payoff is, with Dustin and Suzie. Their relationship is basically treated as a running gag for most of the episodes. Then, at the crucial moment, Dustin calls and Suzie answers. There is no horror to speak of, just two children talking while everyone else listens in.

This scene perfectly encapsulates the show's nostalgic aims. When Dustin needs Suzie's help, she says she wants "to hear it." Talking one for the team, Dustin starts to sing. Suzie joins in. In a moment straight from The Shawshank Redemption (1994) prison yard, the show stops to listen to their duet. The sheer size of the cast and crew works to its advantage, here. The camera cross-cuts to show all of them hypnotized by the same, nameless song. There's no banter—just the joy of children. 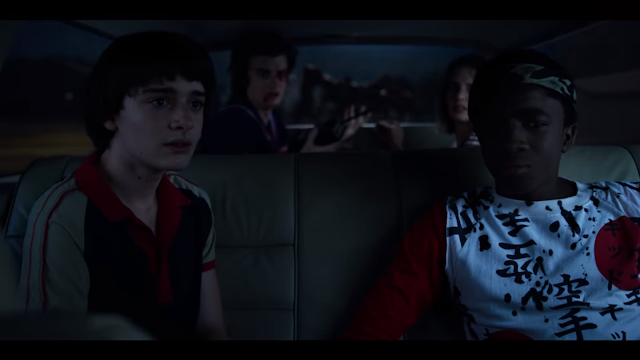 Probably my favorite shot in the whole show.

Older audience members should recognize it. Younger ones will wonder what it is, and why Suzie is thrusting her fist into the air. All of it is accented by the triumph of progression—acquiring the vault's password—but also Dustin's vindication: Suzie is real, and cute as a button. There's nothing false about their relationship, either. Sure, they argue, but not to the same annoying degree as Mike and Eleven, or Max and Lucas. It doesn't grind the story to halt; it furthers the plot in a meaningful way—with actual, narrative weight.

This weight drives the nostalgia home; the fact that it seemingly comes out of nowhere only adds to the fun. This being said, the whole event is built up to, and doesn't overstay its welcome. Better still, it trusts the audience to enjoy the moment on various levels. Either you're the adults, standing at attention; or, you're the kids, at a loss for words. It's great.