July 05, 2019
With the advent of Stranger Things 3 (2019), I wanted to finish reviewing season two's episodes before moving onto season three. I stopped at season two, episode five. Now, I shall examine episode six. 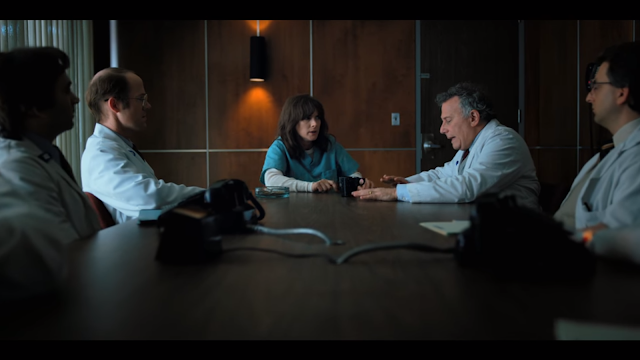 The episode starts with Dustin and Steve discovering that Dart has escaped his prison. Joyce's son, Will, is sick, and she's sitting in a roomful of doctors. None can tell her what's wrong. The difference between them and The Exorcist (1973) is that these doctors actually want to keep him under supervision even if the mother says no. Meanwhile, as she complains to them, the camera tracks along the surface of the table. In the days of yore, this kind of shot was fairly common—less so, nowadays, with a tendency to cut every two seconds. It reminds me of Aliens (1986). There, Ripley bitched; the suits stared. Here, the doctors are the suits (and Paul Reiser acted in both projects: as Burke, and as Doctor Owens).

Cut to Nancy and Jonathan. They're with the local writer, who's trying to figure out a way to sell the Truth to the world. Here, the love triangle rears its annoying head. It's such a tired trope, the writer—drunk in front of them—predicts with reasonable accuracy what's going on between Nancy, Jonathan and Steve. "There it is, ladies and germs," the writer drones. "The second lie of the evening." Except he's talking to us. This kind of free, indirect discourse might work for Austen; here, it stops the show in its tracks.

I'll admit, the jazz music and cross-cutting are nice, and clearly the scene is meant for people who care about such things. A part of me was even glad when the young lovers threw some caution to the wind and got busy. Still, does every story about teenagers have to shoehorn its romance, even when monsters run amok, wreaking havoc? The next scene show Lucas' sister having "borrowed" her brother's He-man action figure, forcing the Prince of Greyskull to kiss a Barbie Doll. I can't help but sense the Duffer brothers' hands on Natalia Dyer and Charlie Heaton, making them kiss in a similar manner. 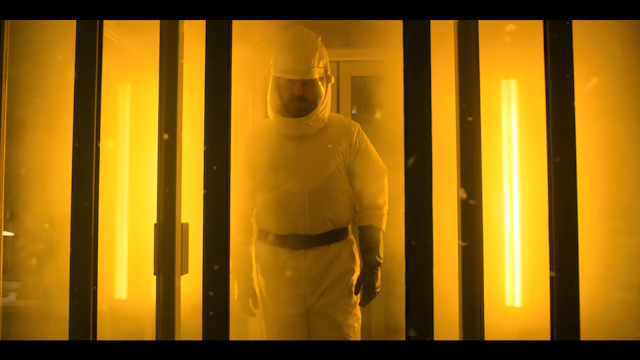 The scene with Hopper and Owens segues into both men suiting up and descending via an elevator (the photography, here, is stunning, making me wonder, for the umpteenth time, why the monster effects are always so poor in this show). Underground, Hooper learns the alien presence is growing, spreading beneath the town. Given the government's brutal treatment of other characters in the past, I'm surprised Hopper is still alive; but his being alive also gives Owen someone to monologue to. Hopper is our man on the inside. Owen? I'm not sure what his game is. He seems less villainous than season one's Bad Guy did.

With Will in bed, Joyce tells Bob, her boyfriend, more about what's going on. "I always thought stuff like this happened in comic books and movies," Bob admits, "not in a small town like Hawkins!" This says a lot about how many comic books or movies he's actually consumed, in his life. The tone continues to be a little uneven, though, as Will's subsequent waking and amnesia are followed up by the writer asking Jonathan over breakfast, "How was the pull-out?"

Next, Lucas rides past Bill's muscle car (don't ask me the make; I've forgotten). He rings the bell until Max comes out. Bill, meanwhile, lifts weights to Ratt's "Round and Round" (1984). Here, the makers of the show wisely start the scene during the guitar solo. The scene ends; the music cuts out to a quick-fade, transitioning to a some moody synthesizers. Max rides off with Lucas, but has to sneak out because her brother apparently doesn't want her going anywhere. The reason why is not yet clear. I presume because he's an asshole. 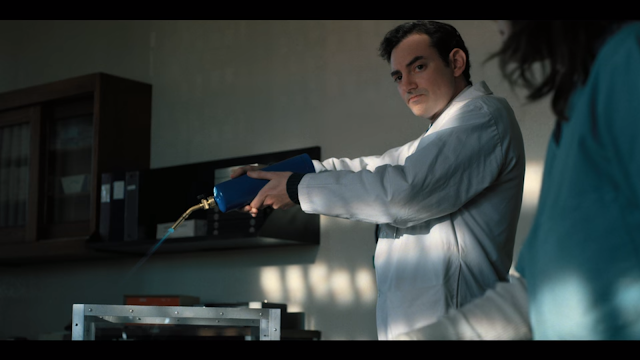 The uneven tone continues. First, Dr. Owens has an experiment, torturing a piece of the alien to see the effect it has on Will. The bond between him and the monster appears to be strong. When the tentacle is burned, Will squirms. After that, we cut to Dustin and Steve, making small talk while leaving bait to lure Dart. They dole meat out onto the railroad tracks; Steve conveys wisdom about girls and hair care. It's as funny and oddball as the prior scene is grim. Together, both segments feel a bit oil-to-water.

Shortly thereafter, Will wakens from a nightmare, and tells Mike, "The shadow monster. I think I know how to stop him." How very Lord of the Rings. Worse, the show makes a habit of showing exactly what the monster looks like (versus shots of it, put together from Will's dreams). There's little mysterious about it, and frankly it's not all that impressive visually, either. You know they failed a bit in the monster department if I'd rather watch Steven call Lucas and Dustin "dickheads!"

Still, the music is impressive. Its drones alongside Steve and the kids, while Owen's group goes on their own quest. There's an area Will can't see, and the soldiers are sent there (and as I write this, I'm going to guess that it's a trap). They proceed inside, wrapped in fancy space suits and sporting assault rifles. The radar pulses much like Cameron's motion trackers, from Aliens ("Pull your team out, Gorman!"). But the cross-cutting makes it pretty hard to keep things consistent. We go from the dark, murky tunnels of the shadow beast to Max spilling her guts to Lucas, atop a rusty old bus.

The dialogue from Max, on the bus, feels a tad contrived. Yes, I learn something about her, for once: She's a kid in a divorced family and that Bill is actually her stepbrother. However, then she and Lucas hit it off, and Dustin doesn't have a clue. It just feels like a tween variant of the Steve-Nancy-Jonathan triangle, but even more clunky and spontaneous. I'm not lying when I say it's a bit of a relief when Steve decides to leave the safety of the bus. Whistling into the mist and swinging his bat, it breaks the tedium of the formula.

Things go wrong and Steve is soon back in the bus. From a terror standpoint, this scene is more enjoyable because the monsters are hidden. The CGI critters look out of place; they just can't blend in, even covered in mist. It works a lot better when the bus frame hides their bodies, so that only the claws can reach inside. There's room to imagine, for a change. Cut to the soldiers in the tunnel, and we have our transition from serious-to-serious, instead of serious-to-lighthearted, or vice versa. The tunnels are dark, and the soldiers' cameras feed through static-filled CRT monitors while Owens looks on. 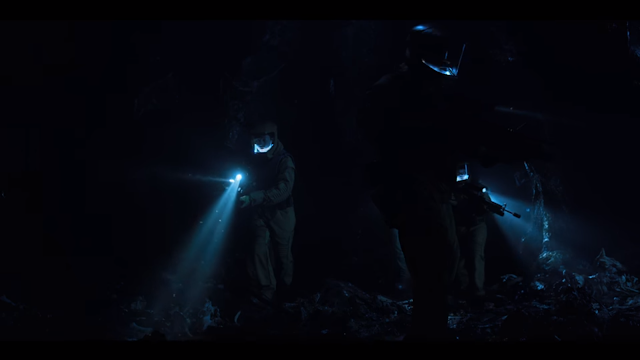 It's all very Aliens. So is the line, "Stay frosty." The lighting is even a touch blue, just like Cameron's older movies. The problem is less this, and more that everything just feels so rushed. Blink and you'll miss the soldiers die, the scene over before it really begins. Given what the show is built from, none of it really comes as a surprise, either. I suspect, the nostalgia is more to lure new generations down the horror rabbit hole, but modeling your episode after a classic seems like a poor choice given how rushed it feels, and how hard it tries to sell its own shock. I much prefer the show when it isn't following the past, beat for beat, but tries to be its own thing.