The episode starts in a concrete bunker. Men in olive-colored hazmat suits strut around a giant machine. Their war-like gas masks are elephantine, bound to rope-like hoses. Upstairs in the command module, a group of scientists and military personnel look on: a general and his second-in-command; another, an aging scientist. 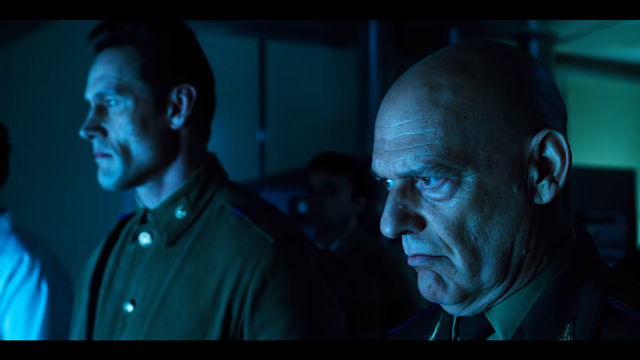 The scientist produces a key by which to carefully activate the machine; a mess of teeth-like gears, the contraption jolts to life. It spews lightning it can scarcely contain. Eventually a beam of light shoots into the wall—specifically an archway purposefully engraved into the concrete. The shape of the door reminds me  the Krell metal from Forbidden Planet (1956). In that movie, the Monster from the Id taps into the Great Machine to burn a whole through the Krell-metal door. Here, the scientists are opening the gate Eleven closed, in last season.

Soon, the machine fails. Like some kind of infernal clock, it grinds to a halt; the gate re-closes and the machine explodes, reducing the masked lackeys to piles of red mush. Angered, the general descends to sullenly examine what should have been an open portal. With a baleful glance, he has his henchmen—tall and Terminator-like—strangle the scientist in charge. A younger scientist is "promoted," given one year to succeed. Then, the general walks out, chased by to a Soviet chorus (the show supposedly takes place in 1985, thirty-two years after Stalin's death. Nonetheless, the Leader's "habits" seem very much alive).

Cut to "one year later." Mike and Eleven are making out (awkwardly). Right off the bat, Eleven has more lines than normal. She talks differently, too—more confident and natural. Hopper is in the other room, heavier and more mustached. He leans back in his recliner to see his daughter kissing Mike. Eleven shuts the door, but Hopper forces his way inside, red-faced.

Cut to Mike, riding home on his bike, him and Eleven talking on a portable two-way radio. Mike rides up to a neon-lit mall; the following scene tracks through the mall (not quite long enough to be Goodfellas [1990] material, but same idea). Navigating the crowds and the escalators, the writers squeeze in some banter. It sounds a bit stiff. Then, Mike and company arrive at an ice cream parlor where Steve works (wearing a silly outfit, no less). His "children" wordlessly ask him to let them through the back so they can see Dawn of the Dead (not Back to the Future). 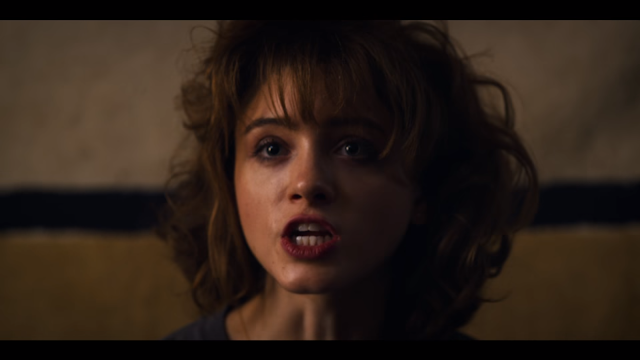 A blackout shuts down the movie, the entire mall, and all of Hawkins. Elsewhere, the shadow monsters makes its return(!). Then the power comes back on. The movie resumes, and the jump scare is coupled with a jump-cut. Nancy sits up, in bed; Jonathan sits up, next to her. She's late, and so is he. They dress in a rush, and she jumps out the window. Jonathan gears up for work and his mother sees him off (not before rubbing the lipstick off her son's cheek). He and Nancy drive past Dustin, whose mother is driving him home from camp.

Dustin has braces now. His headset is fancier, too, but his friends don't respond. Soon, they reunite. Cut to the pool, full to the brink. Karen Wheeler and the other forty-somethings eagerly anticipate the new lifeguard: Bill, Max's brother. He strolls onto the scene, announced by The Cars' "Moving in Stereo" (1978). The same song was used during Linda Barrett's topless scene in Fast Times at Ridgemont High (1982). Women admire him as he walks past—wearing a red swimsuit, one vaguely resembles Barrett.

Cut to downtown. Most of the stores (including the RadioShack Bob worked at) are going out of business because of the mall. Joyce is putting up bargain signs when Hopper strolls in, pissed-off. He's a bit less uptight, this time around, more awkward ("A heart-to-heart? What is that?"); Joyce is more in control. I like it. Unlike Joyce, Nancy's a nervous wreak. Frazzled, she walks into work with sandwiches for everyone. The men in the room talk shop ("How about a piece on Iran?"). It's a bit of a time capsule, with plenty of cheap suits, balding pates and cigarette smoke. One of them is Jake Busy (that guy from Starship Troopers [1997] who gets his hand tacked to a wall). His bad tan and sandy hair are comparable to Trump's. 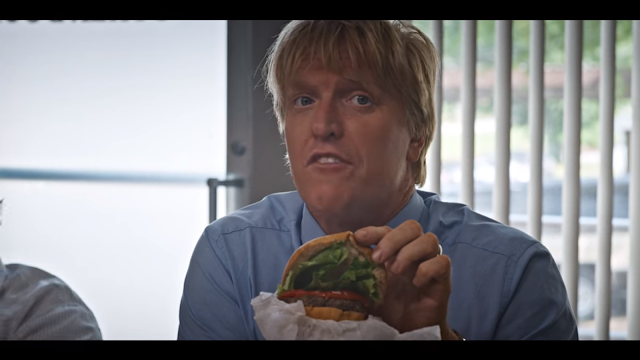 Dustin shows Will, Mike and Eleven the "Cadillac of HAM radios": Cerebro. In the X-Men comics, Cerebro was used by Professor X to detect mutants. Dustin uses his version to talk to his Mormon girlfriend. Everyone is shocked at this latest development. More surprisingly (or perhaps not), Steve is striking out at the ice cream shop (the bitchy co-worker is keeping tabs). And then there's Hopper, leaning on Joyce to help him rehearse the Talk with Mike and Eleven; after deadpanning through his "script," he asks Joyce out for dinner. Love is in the air.

Atop a pastoral hillside, Dustin leads his friends to the radio site. Before they can reach it, Mike and Eleven bow out ("curfew"); they descend, holding hands. Will stops to watch them, and gets a bad feeling. At his feet, CGI rats hop through the grass. As if lead by the Pied Piper, the rodents gather at the lair of the shadow monster... and begin to explode (a bit like the Russian men from earlier). Cut to the pool. Here, the flirting sessions with Bill and Mrs. Wheeler makes for an odd contrast to the "rat bombs." I approve.

On the twilight hilltop, Dustin erects his radio tower (no internet in 1985, kids). He waits for Suzie to respond. Meanwhile, Joyce eats dinner alone, remembering when Bob was alive. Seeing the two of them watching Cheers (1982) on television is touching precisely because he's dead. Joyce remembers him by eating alone (not the best coping mechanism, but it makes for good drama). All in all, the show's juggling relationships from three different age groups. So far, I think the adults' work the best.

This being said, the entire bit with Hopper and Mike is pure gold. I don't actually want to explain it—just to say that it's hilarious from start to finish. The two have had a history and Hopper is spectacularly bad with emotions. This could have been serious, but it's played for laughs and it works. I laughed more during this one scene than all of season two combined. 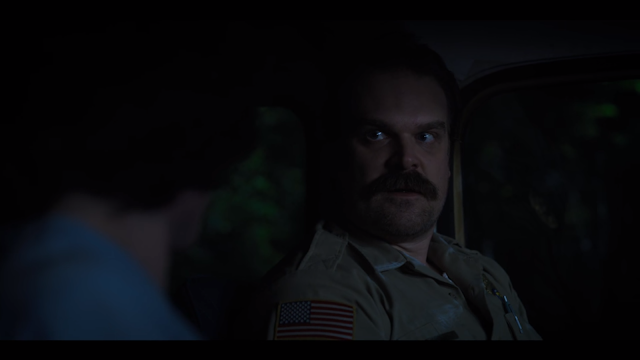 The episode closes out with Dustin, alone on the hill, hearing Russian. The idea of a Russian bunker filled with neon-lights might seem a little weird; frankly it reminded me of Night of the Creeps (1986), minus the zombies. After that, Karen contemplates adultery and Bill wipes out, being dragged to his doom. He's already the "demon lover" (in Gothic terms); now he'll be a host for an alien life form, to boot.

All in all, the tone of the show is a more varied and colorful. It's also violent and dramatic in ways the earlier season's generally weren't (more platter). I don't know if the makers will keep things up, but so far they're off to a good start.
***
About me: My name is Nick van der Waard and I'm a Gothic ludologist. I primarily write reviews, Gothic analyses, and interviews. Because my main body of work is relatively vast, I've compiled it into a single compendium where I not only list my favorite works, I also summarize them. Check it out, here!
I'm an artist and a writer. If you're interested my work and are curious about illustrated or written commissions, please refer to my website for more information. If you want to contact me about a guest article, please use this contact form or reach out to me on Discord (vanderWaardart#5394)!