May 24, 2019
This is part two of my article analyzing the new trailer for Tim Miller's upcoming movie, Terminator: Dark Fate (2019). Part one examines  The Terminator/T2  (1984/1991) and outlines the trailer. Part two will now examine its pros and cons, in further detail. Spoilers!

As mentioned in part one, Miller has clearly taken some gambles on his special effects. Suchgambles are hardly new. Cameron has rolled the dice before, as well; he was simply smarter about it. In T2, he shoots Arnold jumping off of, and rolling away from, the crashing tanker. Both are in the shot, but the footage of the tanker is clearly a blue screen: 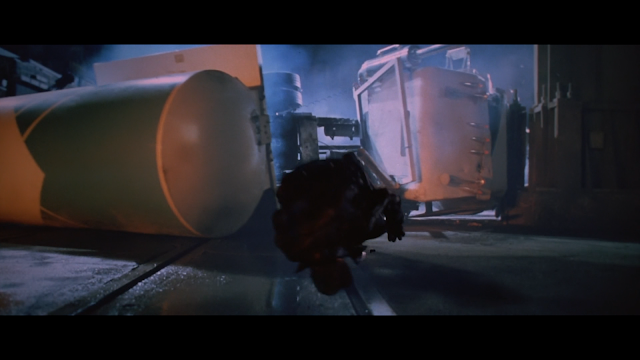 Note how their tones don't match. Blink and you'll miss it.

However, this shot is very quick, thus "hiding" the visual imperfections. This being said, many shots in T2  are longer because Cameron did them live—with a real stunt crew photographed in real time. While either "surfs" the tanker, there are shadows and rim-lighting to make Arnold (or his stunt double) look well-lit. The shot is longer because Cameron knew it looked real and let it roll. Suspension of disbelief is maintained: 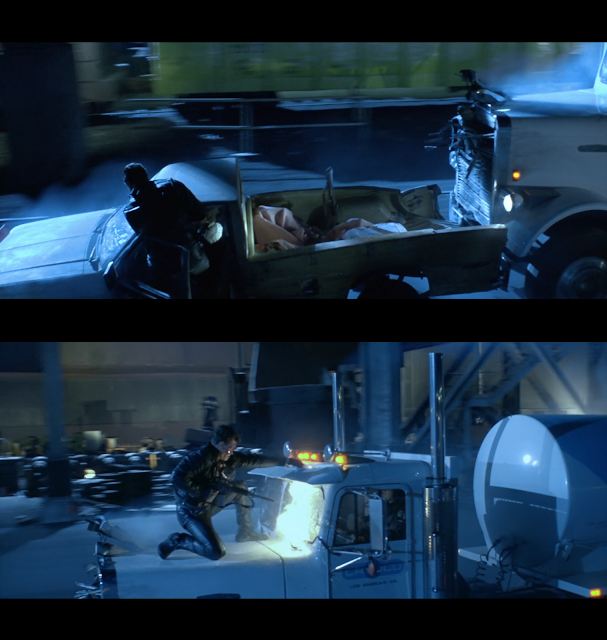 Probably my favorite take in the movie.

The same is not true for Miller's Gabriel Luna. When I watch Luna soaring through the air, I know he's neither actually in the air, nor a stunt double. It looks uncanny. Worse, the shot carries on at such a distance, and for such a length of time, as to allow the viewer to study the shot as it unfolds: It plays close-up (a mid-shot), and in slow-motion. I know that visual effects can change dramatically from early trailers to theatrical footage—just ask Jeff Fowler—but all of this could've been avoided by scrapping the slow-motion, or framing the image differently.

Another way to handle it is to use tricks. In T2, for example, Arnold drives the Connors away from the asylum and down a dark winding path. Here, the cruiser is a real car, but the background is a blue screen. The actors are literally inside a car chassis, in front of a protection; but, it's in real time. David Zucker lampooned this effect in Airplane! (1980). Cameron plays it straight and makes it work. Much of why boils down to a simple trick: a healthy dose of wind and light. These "dress" the image and sell the shot: 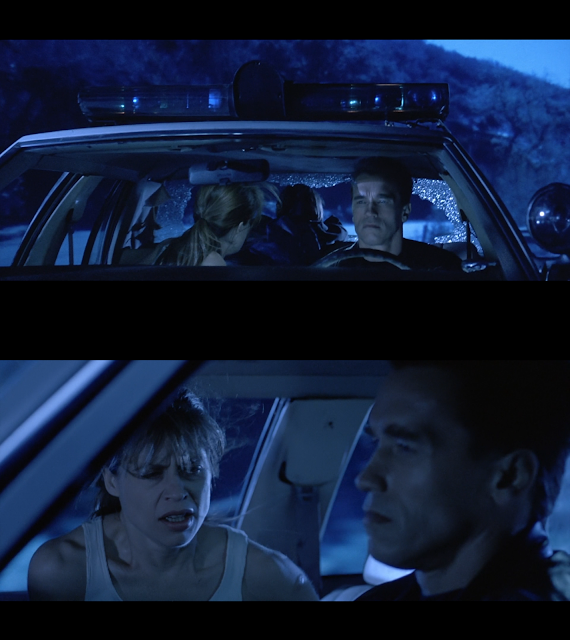 That's obviously a blue screen, but it doesn't draw attention to itself thanks to Cameron's clever use of wind and light.

As a result, Cameron can extend the scene and have however many camera angles he wants. Even if you notice the effect, it doesn't look uncanny like Luna's face does.

[note: In part one, I didn't get past Luna's javelin scene. Now, I want to continue analyzing the trailer.]

In mid-air, Luna throws the rebar... and Grace deflects it. Luckily for him, his car crashes into the survivor's truck; the second passenger is killed/already dead, while Grace and the girl, Dani, dive free. From there, neither can seemingly escape, as Luna has them cornered. In the nick of time, though, a wild Sarah Connor appears! Linda Hamilton pulls up; before Luna can budge, she makes quick work of him. I dig the guns, but the scene reminds me less of Terminator and more of Rambo: First Blood Part II (1985): quick and bombastic.

I have to wonder how later scenes will top the highway chase, in terms of action and spectacle. I don't have to wait long before I have my answer. Until then, the middle of the trailer is mostly dialogue and establishing shots. Some of these are nicely captured, too: 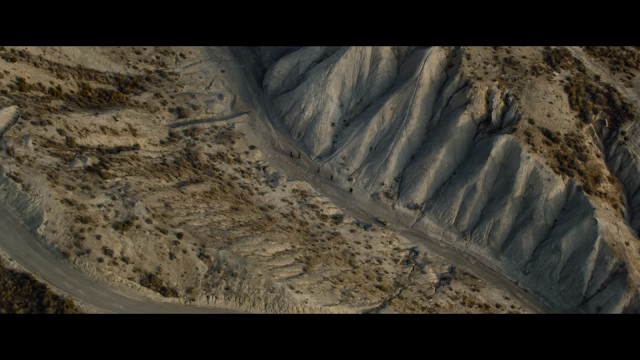 Eat your heart out, Ridley Scott.

These images are peppered with snippets of action from Grace, and several other explosions, to boot. All standard fare. Nothing to write home about. Then, one airplane crashes into another, the latter releasing its cargo: a jeep on a platform, strapped to a parachute. Here, Miller tries a second time to cram everything into the frame. In a single, panoramic take, we see one plane going down in flames; the camera turns, watching it plummet while rotating around the parachuting jeep. The shot ends with the camera pulling back, showing Grace hanging backwards off the platform: 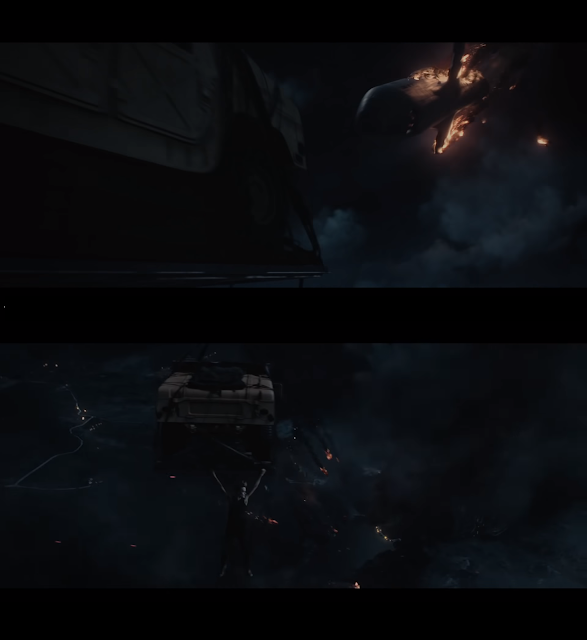 Though these images occupy the frame at different times, both are in the same shot. It's a bit much.

In my opinion, this cinematography is a little too busy even for Cameron. Furthermore, there were no "floating cameras" in The Terminator/T2. The camera rig was always attached to something, be it a Steadicam vest, car, or tripod. Sometimes in the Dark Fate trailer, the camera almost floats through space in a very inhuman fashion—the very sort of "computer camerawork" Cameron fought against, when making Avatar (2009). Much of that movie was digital, but still conveyed a handheld or Steadicam approach.

In Miller's trailer, his imagery is more flamboyant than Cameron's down-to-earth approach. Cameron's trucks and brawls had weight to them; Miller's, less so. Instead, when Luna rams some cars, they fly into the air like toys. When Grace jumps into the bed of the pick-up truck, she vaults over some conveniently-placed bars like a gymnast. Later, when she hammers Luna, he twirls through the air like a male ice-skater: 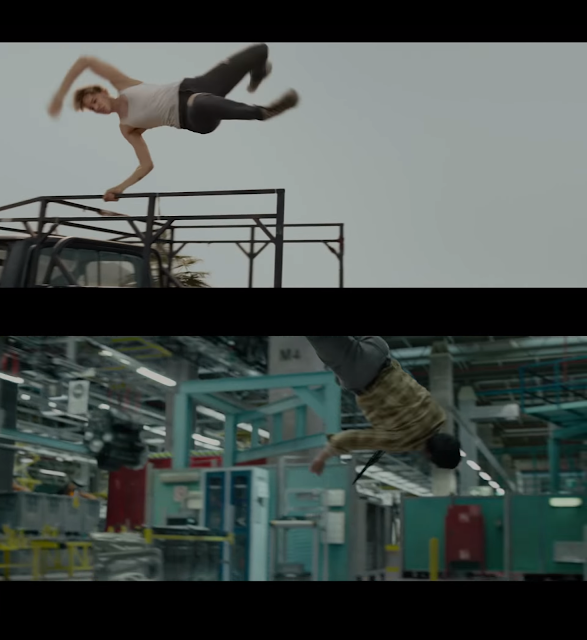 Both terminators. Both oddly weightless.

Not only is this "twirling" uncharacteristic of the franchise's early entries; it's also visually repetitive. By comparison, Cameron's treatment of Arnold, Robert and Michael Biehn is much less graceful: 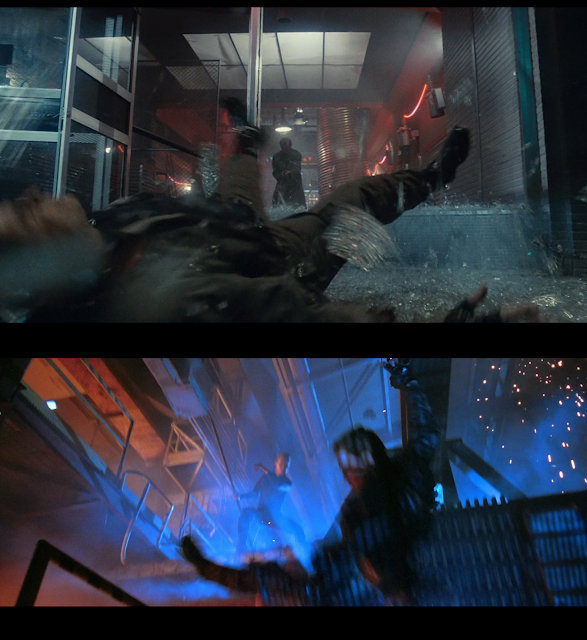 When beaten, shot or thrown, terminators do not twirl gracefully. They pratfall. 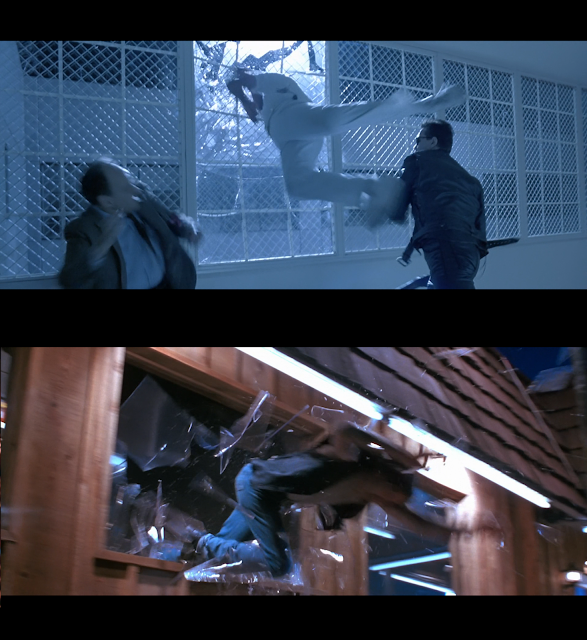 Humans, like terminators, have weight; what goes up must come down, and soon.

Surprisingly, another issue I have with Miller's trailer is the liquid metal. You'd think after nearly thirty-years this wouldn't be a problem. Yet, Dark Fate's visual effects aren't as impressive as Cameron's: 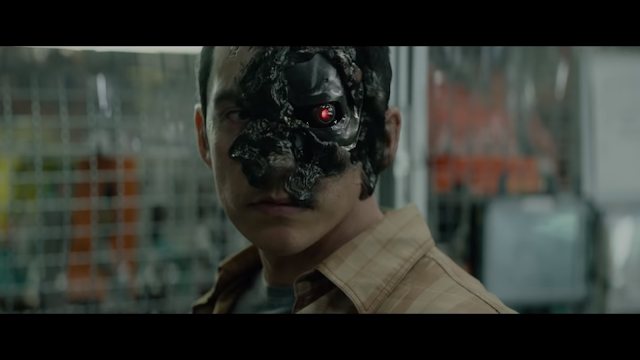 I like how Luna channels Robert Patrick, here (not a fan of the chocolate pudding on his face, though...).

It's not simply about computer power, here; the efficacy of visual effects rely equally well on how the shots are framed. Cameron's cameras do not float, and the visual effects respect the lighting of the scene: real actors on real sets. Because most of the T-1000's transformation shots occur when the camera is stationary, the T-1000 is never rushed; he can "morph" at a comprehensible rate, for a camera that isn't swooping. Little can distract the viewer from what the T-1000 is doing: 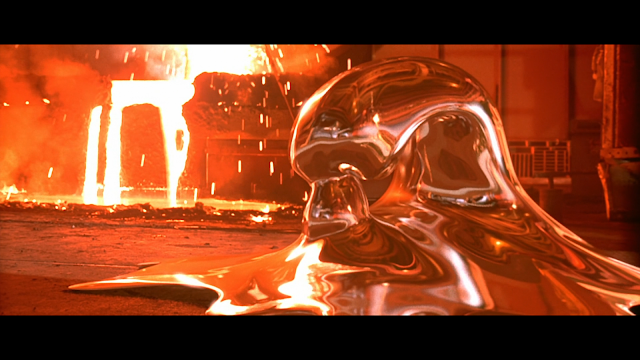 The camera is static, here, thus easier to watch.

By comparison, Luna's terminator transforms atop a moving truck. From off a carbon-fiber skeleton, the caviar-black slime crawls over the rebar, through the windshield, and onto the hood. There's already positive space inside the cab, and negative space through the driver-side window (awkwardly obscured by the rebar). However, as the slime transforms back into bones, tissue and clothes, it branches out into small, thin tentacles that produce even more positive and negative space.

The problem is partly contrast. The positive space is very dark (the shadows and the slime). Yet, the "positive" details clash with a "negative" moving background, itself replete with trees, signs, and guardrails rushing past. All of this goes on while the camera is also rotating around Luna. There is smoke, as well, but the thin, digital sort—not thick enough to obscure the noisy background: 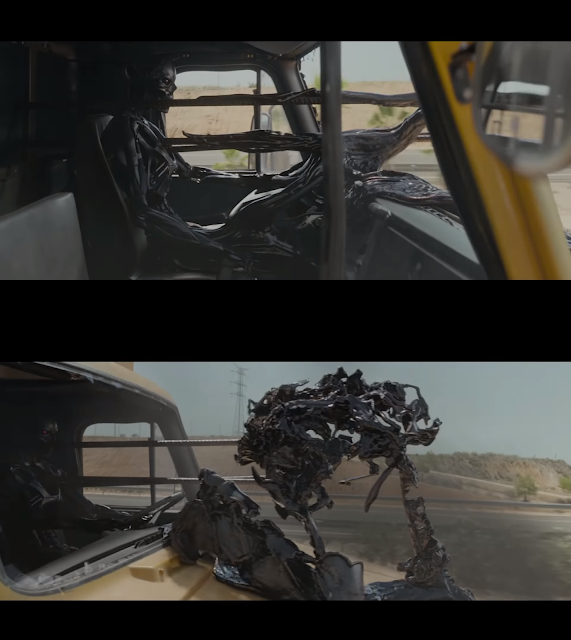 There's way too much going on, in this shot.

The image is frankly a complete mess. Our attention should be on Luna, but there's way too much going on for us to be able to focus on him, alone. The editing of the trailer doesn't help, either. Seeing Davis pummel Luna with a sledgehammer almost feels anticlimactic. One, it arguably gives away the end of the movie (never a good idea). The problem is, it doesn't hold a candle to the earlier highway and airplane scenes, action-wise. To that, the trailer should've settled on one action set-piece (case in point: Dave McRae's trailer fan-edit).

I would've cut the factory duel out, for this reason alone. However, I also disapprove of the factory they're inside of! Unlike Cameron's steel mill, which is labyrinthine and full of smoke, Miller's factory is single-floored and brightly-lit. Nothing about the scene feels "dressed," in a Gothic sense. Where's the mist, the gloom, the lightning? All we have are the actors, and they're twirling about: 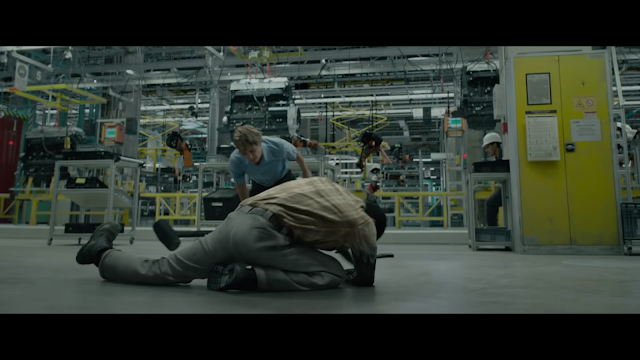 Nice leg-break (and vintage sound effects). There's also a bit of visual incontinuity here: In this shot, Luna's right arm has slime on it; in the next shot, it doesn't.

As far as I can tell, Miller's Dark Fate works with familiar themes, textualities, and action beats. Arnold, in some shape or form, makes a return (meh); Davis, herself, is tall and athletic—more so than Linda was, even in her prime. I dig Davis' scars. Also, the post-human theme—that a machine like Grace identifies as human—is more like Sam Worthington, in Terminator Salvation (2009). These are good things. She's certainly the most enigmatic part of the trailer. Given the franchise's age, it's nice to have an honest question mark, again: 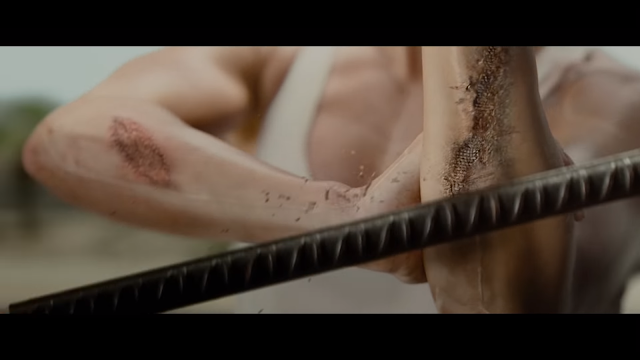 Detail-wise, this slow-mo shot works well. Also, Davis' "endoskeleton" reminds me a little of plaster-of-Paris. What lurks under her skin?

The extended chase is recycled, too. I know it's a franchise staple—Miller borrows it from Cameron (and the franchise's other directors) just as Cameron borrowed it from Westerns and Spielberg's Duel (1971)—I just wish they'd find a different way to go about it, this time. Still, it looks marginally better than Genisys' bus chase on the golden gate bridge (not that that's saying much).

The one thing that isn't borrowed, though, is the music. Brad Fidel's famous melodies are curiously non-existent, here. This includes the technology used to produce the music. Be it drum machines, or the Fairlight CMI, there's no "cutting edge" in Dark Fate, nothing akin to a Mellotron, theremin or mono track to timestamp the sonic palette. All we're given by Miller is a spooky choral version of Björk's "Hunter" (1997). I really hope there's more to it than that.

If Miller wants his movie to work, he's going to have to knock it out of the park, music-wise. The problem is, the latter-day Terminator movies already suffer from anemic, lackluster music; without Fidel's leitmotifs, altogether, there's nothing—not even a skeleton—to listen to. I've heard Brad Fidel isn't part of the project, this time around. Will the new composer try to emulate him, like Jed Kurzel did of Jerry Goldsmith's work, in Alien: Covenant (2017)? To be honest, I have no idea.