[editor's note: Most of my questions about the contest, itself, are based off the contest brief, on Tongal's website.]

Nick: How and when did you find out about the contest? Did you have time in advance, or was it short-notice?

K & S: When we saw the call-out for pitches, we had less than six days to come up with something. The first portion of the pitch required a "beat sheet" of the full story as well as listing the key team, on board. [To] make sure that we were giving them options to choose between, [we] pitched three different stories. "Ore" was actually the first idea we came up with. 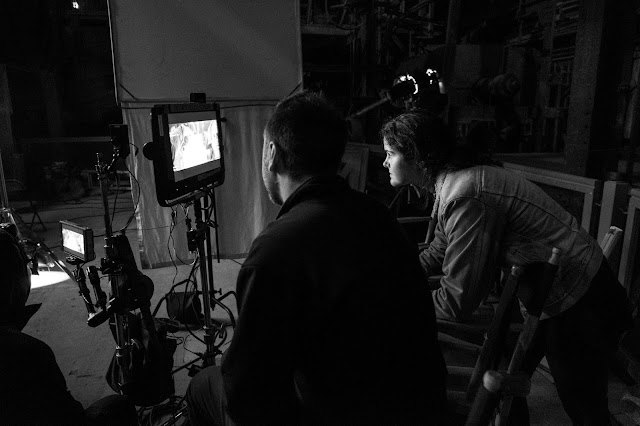 Nick: I’ve read repeatedly how 550 entrants participated. Initially I thought 550 shorts were submitted, but it sounds like it was 550 synopses. Is that true? Just so I understand, eighteen synopses were selected to qualify for a “pitch phase”; then, six “winning pitches” were chosen to enter pre-production?

K & S: Yes, we believe there were over 550 "original pitches" submitted. This means full-story beat sheets, as well as the key team assembled. Out of those [550] submissions, eighteen were chosen to move onto the "new pitch" stage. Upon being chosen as one of the eighteen, we were given ten days to: write the script, create a pitch video for the film, and deliver a thorough treatment package. This treatment included every piece of our vision for the film: our ideas about characters, locations, sound, music, color, props, wardrobe—everything.

After that, six films were chosen to move onto pre-production. Now, moving into pre-production [still] did not guarantee that the film would be made or released; there were many approvals along the way. They rightly needed to make sure that our film was going to be able to fit within the Alien universe. Getting the go-ahead for production was a great moment, as was the final approval of the finished film.

Nick: Out of curiosity, was the go-ahead an e-mail or phone call?

Nick: I only ask because if it were a phone call, it would've been hard for me not to cry out! Did something like that happen with you two, when you got the go-ahead to move into production?

K & S: We were at a friend's house, getting ready to babysit her baby [for her while] she was moving into a new house. It was surreal for sure. We felt like we should be working right away as there was so much to do to prepare for production. But we let ourselves have that day to take it all in (and help our friend move into her new house) before launching into pre-production madness.

Nick: Did you know how many other entries had been made when you submitted?

K & S: We think we were able to see how many entries had been made. We remember thinking that it would be a long shot to be chosen. But we couldn't not submit! We really wanted to be able to direct one of those films!


Nick:  How did you feel when you qualified, and then won? 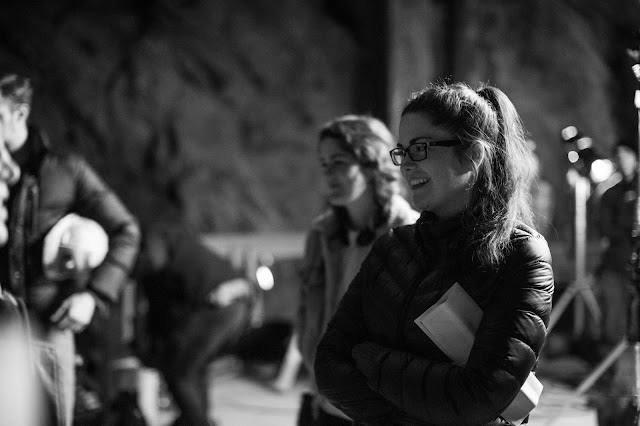 Kailey (right) and Sam (center), thrilled to be on set (courtesy of Greg Massie).

Nick: Did the restrictions for the contest (no pre-existing characters, for example) force you to change any of your ideas after entering?

K & S: "Ore," as well as the other stories that we pitched, was created for this specific project. We molded our stories to the specifications they gave us (such as including the [xenomorph] in some form of its lifespan, and not including any pre-existing characters).

Nick: Did Fox's "story starters" help you in the writing process, or did you have a pretty clear idea about what you wanted to do from the start?

K & S: We didn't use the "story starters" as a jump off point for any of our ideas, but rather used them to give us a general sense of what tone and [scope] they were looking for. We knew [these] films were being made to celebrate the 40th anniversary of Alien (1979), so the stories [we] pitched had that in mind. We wrote knowing [our short] would be watched by an audience that was already familiar with Alien and were wanting to celebrate it.

Nick: What research materials did you have access to, ahead of time? Did Fox grant you access to any special archives to help your project feel “more Alien”? I know when working on Alien: Isolation (2014), Creative Assembly were granted a “master drive” with terabytes of data on it, containing original specs and raw data from Alien. Were you provided anything akin to that?

K & S: Aw, man! That would have been cool! They gave us an Alien Universe guide that outlined what we needed to do in terms of things like color palette and font choices, and [also] the Weyland-Yutani logo to use. Other than that though, we brought our own research to it. We went through the original film shot-by-shot, breaking everything down (including making notes on all of the specific sounds used). We wanted to make sure that [our short] fell seamlessly into the world of the original Alien. As it was a celebration film, we also wanted to make sure we were dropping a few fun Easter eggs.

[editor's note: Considering the lack of provisional materials from FOX, the attention to detail by Kailey and Sam is both extremely faithful and impressive.] 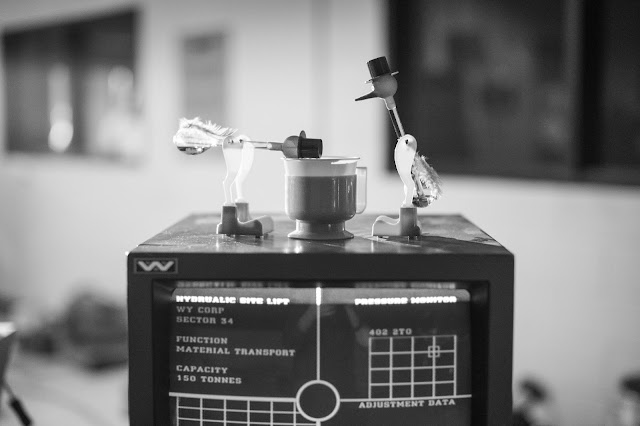 Nick: Creature-wise, did you know what you wanted the creature to look like, early on? In your short, it appears to have ridges on its head, like Stan Winston’s version of the xenomorph, in Aliens (1986). What influenced your decision to go in that particular direction?

K & S: That was the work of our amazing visual effects team at Image Engine! They had [created] a xenomorph [in advance, which] we used for this film. We loved the design that they had [chosen]. She’s a beaut.

[editor's note: According to Tongal, pre-production lasted three months (July 25th to October 22nd). During that time, there appears to have been a lot of steps.]

Nick: To move into production, you had to get script approval; did you find your script needing lots of corrections?

K & S: Yes indeed, approvals needed to be made with every change. Our script had reworking done after the first submission, but the changes weren’t too wildly off what we had originally proposed. The notes we got really helped strengthen the script.


Nick: For the head shot and casting reels, you had to submit at least two actor options per role; were any of these rejected?

K & S: We submitted our choices and our final cast were chosen/approved from the audition tapes that we sent. We didn’t have to go back and do any re-castings.


Nick: You needed storyboard approval; did you "pull a Ridley Scott" and storyboard the scenes yourselves? Legend has it, Ridley spent six months working on storyboards, and was able to double his production budget (from $4.5 to $9 million). Were you satisfied with the storyboards you were able to produce in half that time, on a fixed, micro-budget?

K & S: We have a very talented artist friend who we got to do our storyboards, Kaitlyn Hunter. We have worked with her in the past on other projects. She is actually one of the artists responsible for the "Alien: Ore" poster. She and James Lee Abbott did the poster, [but she] is responsible for the final art you see. We were happy with our [story]boards. But, man, it would have been nice to "pull a Ridley Scott" and double our budget! 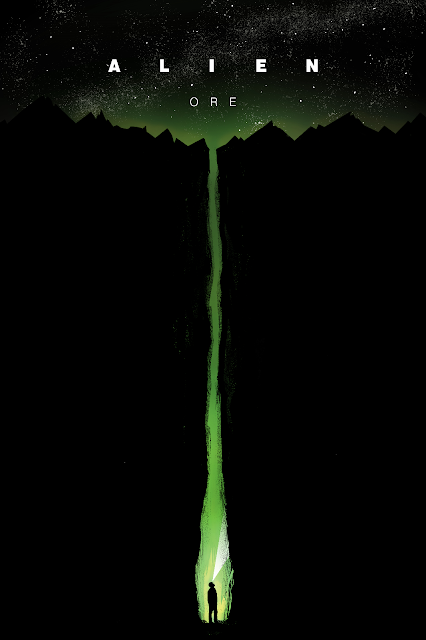 Nick: You needed location approval. Was the tunnel shot in a real tunnel in a real mine?

K & S: Yes! We shot in Britannia Mine Museum (an old copper mine) just outside of Vancouver, British Columbia. It was great to be able to shoot in a real mine and get those great claustrophobic tunnels and gothic-looking corridors that we wanted. We feel that those jagged edges of the rock add to the fear factor nicely. We sprayed them down with water to make sure that they glistened in that nice, sinister way. 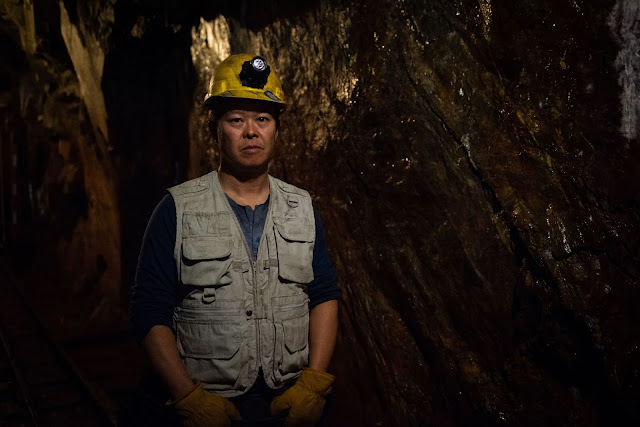 Behind actor Eric Yue, the cave walls glisten (courtesy of Suzanne Friesen). [editor's note: Similar techniques are used in other horror movies—in part, to illuminate the location, and partly to affect the audience in a Gothic sense.]

K & S: Production actually took place over four days[!]. Three nights in the mine, and one day the next weekend at the locker room [and at] Hanks' office location.

Nick: Did you feel rushed at any point?

K & S: Oh gosh, it seems that filmmaking always feels a bit rushed. There could always be one more tweak that could be done to lights, one more take to try—but we had to keep moving if we wanted to get everything that was in our script before the sun came up! 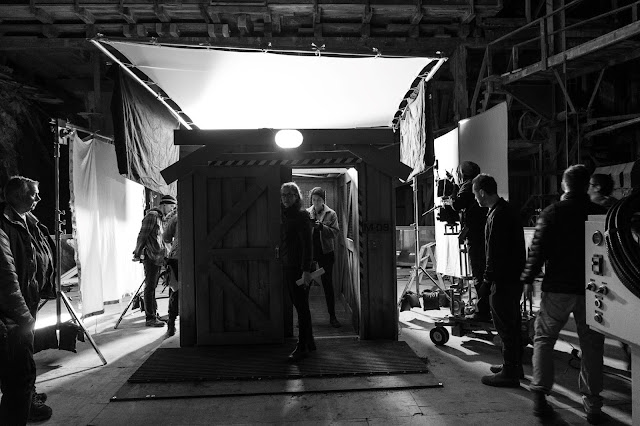 Kailey (outside) and Sam (inside) on the elevator set, during production (courtesy of Greg Massie).

Nick: How difficult was the shoot?

K & S: The shoot was actually very smooth. We had a great team working with us.


Nick: Were there any accidents on set, any funny incidents?

K & S: I think the funniest moment was probably when the fog machine [inside] the tunnel gave off a bit too much fog. And by “a bit too much” we mean a lottttt too much— 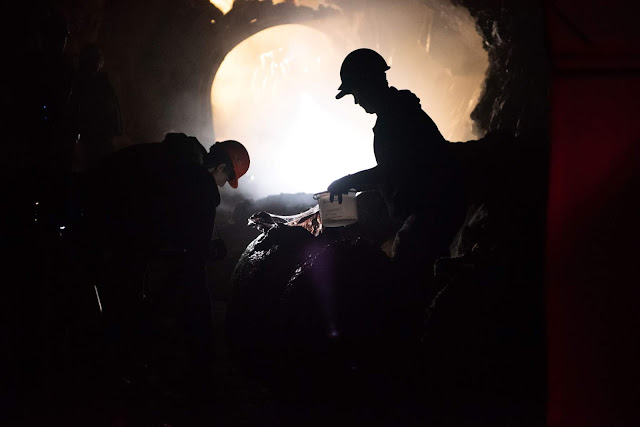 —We couldn’t see a foot in front of us, there was so much fog. We all had to stand still where we were, all waiting for the fog to clear out. We could hear people laughing around us, or down the tunnel, but we couldn’t see anyone. We were thinking, now this would make for a scary Alien film! Imagine being caught in [a] fogged-out mine tunnel with an alien that can crawl around the walls, and you can’t see anything but a foot in front of you in any direction!


Nick: I was impressed by how much on-screen chemistry Mikela and the other actors had. 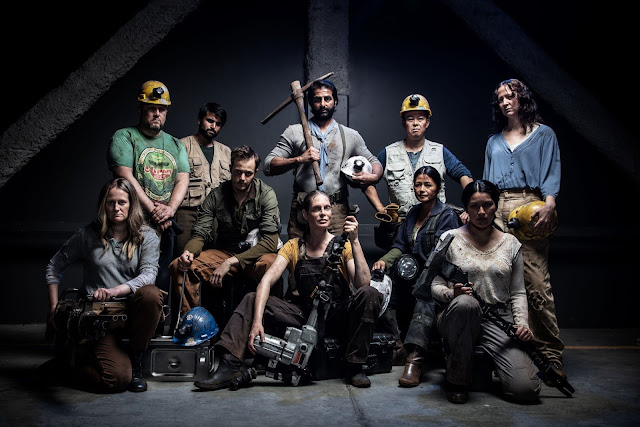 Nick: Did Mikela and the other “human” crew members spend time together off-set, separate from Tara Pratt, to emphasis the human-android rift?

K & S: We took the group, including Tara, for drinks before the actual shoot. We wanted to make sure that they were comfortable together, that that they felt like a unit, before going into shooting. For us, it wasn’t a problem that Tara met with them before as they were supposed to trust her. When it came to shooting, the rift was already going to be there physically for us as they were acting in two completely separate spaces.