May 11, 2019
This article studies Gothic elements in The Terminator/T2 (1984/1991). Part one outlined their shared themes; part two and three (this segment) examine their shared textual elements—The Terminator and T2's, respectively.

The Terminator concluded with Sarah crushing the T-800 in a hydraulic press. Afterward, with her lover dead, our bereaved heroine rides off to meet her destiny head-on...

Seven years later in T2, Sarah's predicament mirrors Kyle's—not simply the circumstances, but the textual elements: the familiar faces, items and weapons she must cross on her journey. For her, it is less a joyous quest, and more a recursive nightmare. Whereas Kyle tried to protect the woman he loves, Sarah aims to safeguard her alienated son, John. She's locked up in a mental ward, not a police station. There, she's viewed as mad, but also as a woman. Dr. Silberman, a man, is now head of the facility and lords smugly over her. So do her male guards, who beat and abuse her sexually. 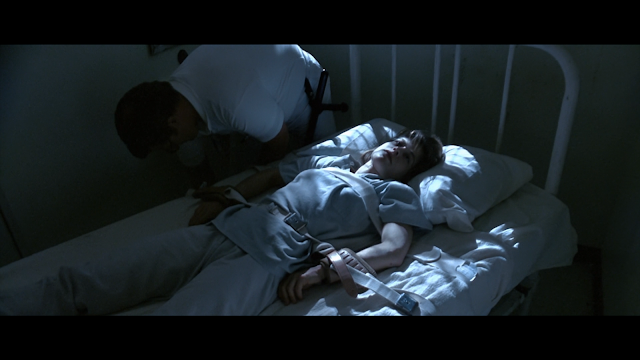 Before, Sarah was a civilian; now she's property of the state. To demonstrate this fact, Cameron shows us Silberman, calmly leading the next generation of doctors through the ward. Some are women; there are no male patients, on-screen, however. A string of female patients march past the doctors, single-file. They all wear white; the brown-shirt guards are mostly men, and carry nightsticks. Most of the women are subjugated, docile. Sarah is not. Amazonian, her body sweats; her hair is wild and her biceps bulge. Arnold would be proud; the doctors peer curiously at her through her cell window like some kind of monster. Undeterred, Sarah glowers back, muscular and defiant ("Good morning, Dr. Silberman. How's the knee?").

Troubled by this defiance, Silberman waits for the doctors to depart. Then, he quietly and airily tells a guard, Douglas, to sedate Sarah. Douglas verbally complies; when Silberman is gone, Doug and another guard enter Sarah's cell. Their attitude is lofty and superior. When she refuses to take her medication, they beat and torture her. Their faces are cold and robotic as they force the medication down her throat ("Sweet dreams, sugar!"). Eventually Sarah has had enough. Breaking out, she subdues Doug and captures Silberman. When she tries to escape, reaching her son comes after the quitting of a dungeon and its male jailers. 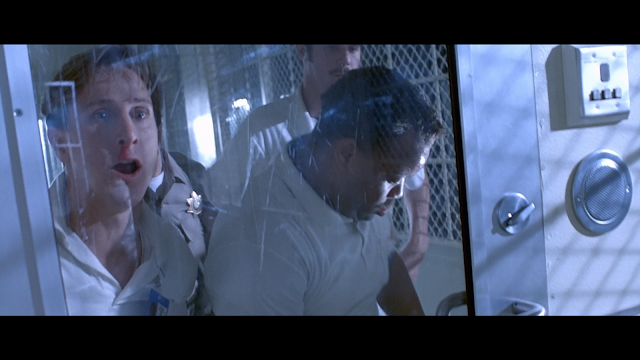 When Sarah tries to run, she's hunted. One guard pushes up against the door she narrowly closes in his face. Even when closed, the door is glass; we can see through it, at how much bigger this man is than Sarah. He means her harm, as do the other men; they take pleasure in the chase ("Come on, man! Open it!" one guard cheers). However, when she is about to escape, the elevator door opens, and we see a familiar face emerge from the past: the T-800 that hunted Sarah and killed Kyle, her lover!

Overwhelmed, Sarah "quits the chamber" (a Gothic trope). She runs backward, screaming into her assailants' arms. In this instance, we know the T-800 is safe; she does not, and tells the men around her "He'll kill us all!" They do not listen, and pay the price. The T-800 does not kill them, and Sarah is wrong. But a nearby danger lurks: the T-1000. Amid the peril of the asylum, there are dangers behind dangers; here, like with The Terminator's ultimate factory scene, the threats and images bleed into each other.

What's interesting about T2 is how this occurs. It is a technological function of the T-1000, a "poly-mimetic alloy" that can imitate its victims in real-time. While The Terminator  funneled uncanny textual elements through an ambiguous, somnambulist perspective, T2 is more straightforward, more "awake." Even so, its villain's ability—to fool our eyes—is much greater than the living tissue "grown for the cyborgs." When damaged, the T-800 rots; its flesh peels pack to reveal a metal endoskeleton. The T-1000 can change shape before our eyes in ways that confuse us before, during and after. 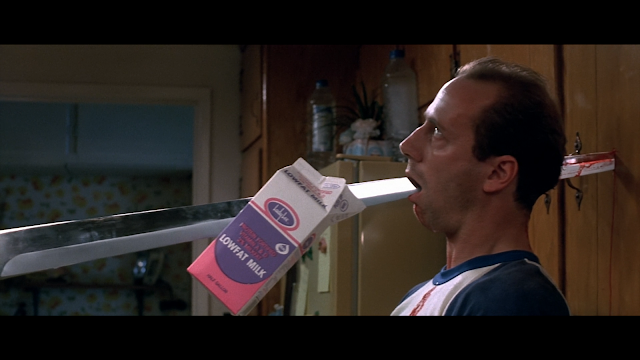 As part of the Gothic mode, the Terminator  franchise concerns malign imitation; in its case, powerful technology "comes alive" from the past-future to attack us, in the present. Such an attack concerns not merely our bodies, but our senses. The Terminator/T2 mirrors an ongoing predicament. Through vastly different approaches, the textual elements barely change at all; the technology of the killer is unique each time, and allows for radically different approaches to the hostile replication.

Also, while constant throughout their run-times, each movie remains unique in terms of depicting mental health (notably female). Younger Sarah is traumatized; older Sarah is scarred. Like everyone else, Silberman doesn't believe Sarah when she spouts off about Judgement Day. This being said, the "delusional architecture" in T2 is more unique than Silberman's generous prognosis. When chased by a cop, younger John doesn't blink; he's a crook, and expects to be in trouble. He doesn't immediately say "My mother was right!" Mid-chase, he sees a man with a gun. So do we. Until Arnold shoots Robert Patrick, the smaller man looks uncannily human. Only the eerie music betrays his true self, or lack thereof. When Robert arrives from the future, we cannot deny his humanity. Even if we could, what are his model number and function(s)? We just don't know.

Until that pivotal moment in the Galleria, we cannot even say which one of them is John's protector, prophesied by Sarah. For example, Robert's handling of the police officer is quick and bloodless; Arnold's thuggish treatment of the bikers amounts to a bar fight, his brawn and brutality of full display. While Arnold spares the men, he doesn't handle them with kid gloves, either. Future viewings betray his motives through omnipresent black humor. Nevertheless, Arnold does it with a straight face. Only in hindsight does context betray the scene.

For both terminators, the textual elements are largely opaque. However, only Arnold is revealed to be a machine, early on. We see through his eyes; in the bar, he is stabbed and beaten to no effect, and lobs men about like rag dolls. Robert ostensibly goes through time, but lurks off-camera; we never see directly through his eyes. Furthermore, his knocking the policeman out is no more outrageous than Kyle doing it with a flying knee. He could be human... a really frosty human. 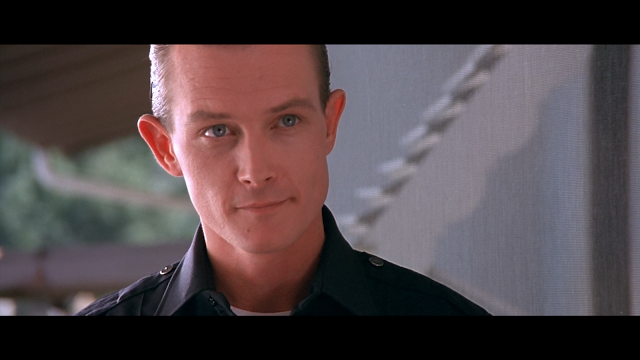 The ears give him away.

Of course, the film's scope gets in the way of its own content. When the movie released, everyone knew Arnold was the hero, this time around (thank the marketeers for that one); this didn't change the fact that he was a replica of a prior, villainous model. Sarah's madness at seeing him at the asylum makes sense, in her eyes, because the last time she saw his face, he was trying to kill her! Likewise, the detectives recognize his photograph and compare it to camera footage taken, in 1984—they have their man!

Except they don't; Arnold isn't the villain, Robert is. Regardless of the promotional material, we're meant to believe Arnold is the villain, too, because he is nakedly depicted as a terminator—Robert isn't. The twist, here, is that Arnold had been reprogrammed to protect younger John from the T-1000 future John already knew about. Funny how Sarah left that out, during her narration. It's almost like Cameron deliberately meant to confuse us (and in a way The Terminator did not; Kyle was unreliable, but his intentions [and the first terminator's] were much clearer from the off-set)... How Gothic.

As the chase continues, Robert becomes more and more monstrous, and our expectations are subverted by a new, technological horror ("What the fuck is it, what the fuck is going on?"). Cameron's master-stroke lies in how the two machines are viewed. Arnold remains on camera, unable to fully-blend in (the mission, for him, is not infiltration, but protection); Robert often hunts off-camera. While on-camera, he not only blends perfectly into the background, he becomes the background (or a person inside it). Faceless, the T-1000 is like a statue come to life, but also the feeling of danger personified. 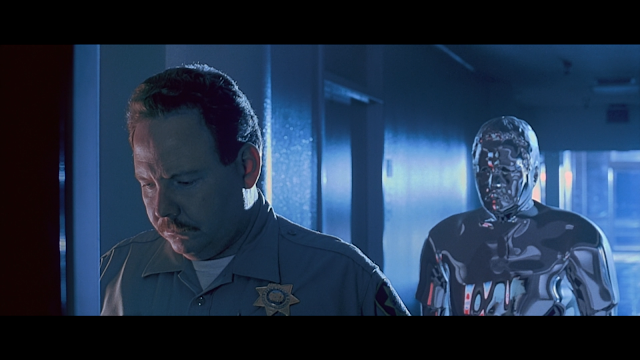 Don't worry: He gets a full-house!

Consider the moment Lewis is killed: Inside the hazardous mental ward, Robert rises up out of the floor. Confronted, he is uncanny to Lewis because Robert shape-shifts into Lewis before Lewis' eyes (and ours) in a very literal sense. The situation remains uncanny post-replication for several reasons: Lewis is a faced with a copy we know to be perfidious; and his own, subsequent termination is not denied to us. Robert's brutality is guided by a mechanical directive, an ubiquitous Skynet we often hear about but never directly see; Arnold will kill because he's a terminator, but is ultimately guided fourth-dimensionally by a benign, human master ("You just can't, okay? Trust me on this!").

John cannot change what the T-800 is, but pacifies him nonetheless. By comparison, the T-1000 remains wild, alien and lethal. It changes shape, often in awesome and unpredictable ways. Its head is blown apart, its body dissected by bullets. It produces "knives and stabbing weapons" out of thin air. On-screen, it becomes a walking phobia, the embodiment of the slasher in all its forms, but also its victims and their grave sites. It is moribund, saturated with potential death, which it acquires through physical contact. It feels familiar and alien—uncanny par excellence.

Whereas Kyle and Sarah's visions, in The Terminator, were narratively liquid, the T-1000 is textually liquid. The crowning achievement of a perennial nightmare, it is the faceless shadow of so many fears. Sarah's night terrors cannot stop until Skynet is crushed. For that, both Robert and Arnold must die. Killed, they melt into harmless goo; Sarah faces the shapeless future with a sense of hope. Will Skynet return, regardless? 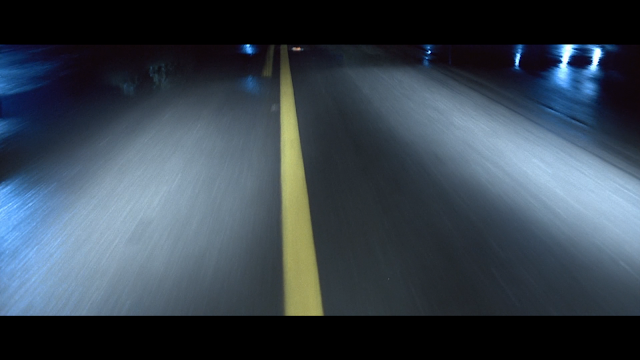 I'll take some pavement lit by Adam Greenberg over Cameron's shoe-horned Utopia, any day of the week.

I ask this ignoring Cameron's terrible alternate ending. In it, everything is spelled out—in Utopian fashion by a much-older Sarah; John becomes a senator and advocates for peace. That's all good and well. However, it betrays the franchise's greatest strength: fear and doubt. Our current political climate should prove the future is not set, and in the hands of political agents and military men, Skynet, "a computer defense network built for SAC-NORAD by Cyberdyne Systems," could always "return" again. The dream never ends, because the fear—of being alive in an uncertain present—is continuously preserved through the things we build and leave behind. That includes Cameron's fabulous Terminator movies. Rediscovered in the present, these relics come to life, invading us from all directions.
***
About me: My name is Nick van der Waard and I'm a Gothic ludologist. I primarily write reviews, Gothic analyses, and interviews. Because my main body of work is relatively vast, I've compiled it into a single compendium where I not only list my favorite works, I also summarize them. Check it out, here!
I'm an artist and a writer. If you're interested my work and are curious about illustrated or written commissions, please refer to my website for more information. If you want to contact me about a guest article, please use this contact form or reach out to me on Discord (vanderWaardart#5394)!