Ever since watching The Terminator Collection  on my uncle's VHS player, I always loved the Terminator  franchise. So, when I heard James Cameron would be producing Tim Miller's new Terminator  movie, I got excited—yes, excited. Despite Cameron's glowing praise of the very uneven Terminator Genisys (2015), I felt my hopes start to rise (for the record, I enjoyed Genisys, but it could've been a lot better, too). This excitement peaked when I heard a trailer had been released: 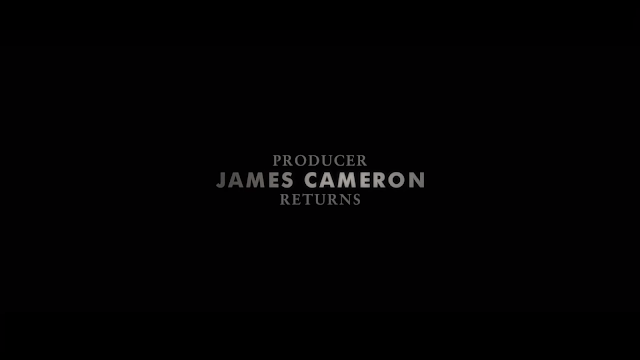 "A message, a message from the Lord!" "God be praised!"

However, now that I've watched it, I've tempered my expectations. More than I wanted, I'll admit, but at least the movie will be rated R. In short, there're things about the trailer I like, and things that have me worried. I'll explain both, in a second; right now, I need to explain myself...

I'll be honest: It's not that I think the franchise "needs saving" or "needs to die." Fuck that. I just want this movie to be competent. What do words like "competent" even mean, though? To have an idea, look beyond the silver screen. Sure, I like the franchise—lots of people do—but pickings are slim outside movie theaters. Game-wise, there's quite a few, but most of them suck; some could've been worse. On television, there's The Sarah Connor Chronicles (2008-2009) but it got canceled. That's about it.

Of course, if another standalone (non-movie) Terminator  videogame or TV show turns up, I'll probably check it out. I'm more interested in Terminator  movies, though (mostly because they're more likely to get made). I'll also be the first to admit that most of them aren't that good, either. Indeed, the franchise owes its initial success and stubborn longevity to James Cameron. Full of memorable one-liners and unforgettable special effects, his movies set the bar high in either decade, and people still remember them as being "the best," years later. 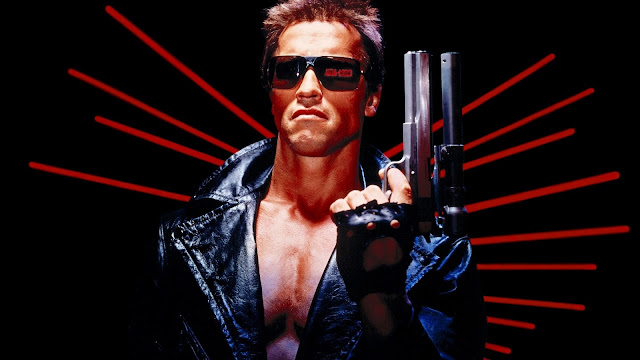 Since then, it's been mediocre sequel after mediocre sequel. I saw each upon release, and watched their trailers, too. While I enjoyed parts of them, none lived up to Cameron's originals. There are many reasons for this, though it generally can be summed up as a lack of quality on one level or another (special effects, music, character development, editing, etc). This is largely because Cameron is a perfectionist, asshole director who demonstrated a very particular vision. Since then, no one has come close in replicating it. As far as I can tell, after watching the trailer, neither has Miller.

[note: I'll explain why Miller's trailer indicates a deviation away from Cameron's signature style, in a moment. For now, I want to explain why Cameron's work is so revered, decades after the fact.]

Non-Cameron Terminator  movies are derivative. Then again, little about Cameron's movies are original, of course (see: Colossus: The Forbin Project [1970] or "Soldier" [1964] by Harlan Ellison). He, at least, replicated older concepts in ways that felt unique for the time period. Call it a personal zeitgeist, but Cameron's movies absolutely brim with a pathos unique to 1984 and 1991. For a more comprehensive analysis, see my articles on how The Terminator/T2  are Gothic; to summarize my argument, Cameron's emphasis was always on L.A. as a time-space under attack. Invaded by monsters from elsewhere, these infiltrators didn't storm in, guns ablaze; they crept in, hiding in plain sight. As a result, the "future war" became an omen to be considered, a crisis to be averted.

This isn't to say that Cameron's movies are devoid of spectacle. They're action-packed. Even so, there's equal emphasis on atmospheric tension. While The Terminator  shows L.A., postmortem, it barely tips its hand before returning to a ghostly present. T2  is more straightforward. Showing a future war with steeper panache, it bombards the viewer in pure, pyrotechnic hyperbole; while the T-1000 visits tremendous mayhem on present-day L.A., it is never to the same explosive scale shown in the opening scene: 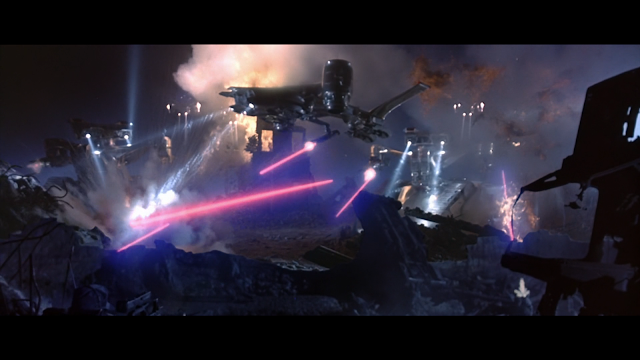 With either movie, the future scenes being shown early on is moot. Future L.A. was already destroyed; the impact hits harder when the unscathed buildings are leveled, in the present (the nuclear nightmare, for example). Cameron also treats every event as an individual spectacle, worthy of attention. During his numerous semi chases, for example, Cameron frames the aggressor just so, as to make them seem perpetually massive and threatening: 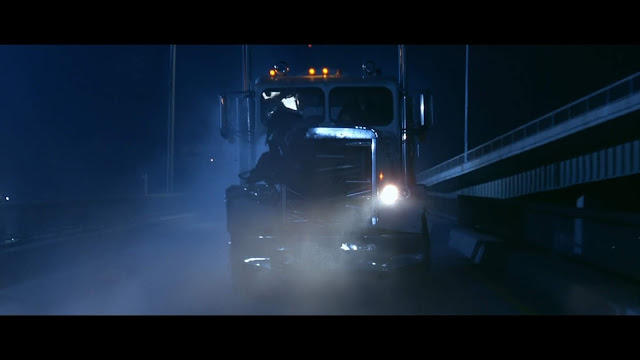 If a tanker appears gigantic in the present, it doesn't matter how big an H-K was, in the past. Also in this scene, Brad Fidel's music emulates John Williams'  Jaws (1975) score.

Cameron also takes his time, using "rising action" to realize the monster's full potential; whatever the villain, their fantastic abilities are gradually built up to. Arnold, for example, kills several punks, shoots up a nightclub, and then raids a police station; he takes damage, but doles out more of it. Robert's wherewithal, I think, is better exemplified by his ability to survive; no matter what the good guys throw at him, he just shrugs it off. An exploding truck; handguns, shotguns, and assault rifles; liquid nitrogen—his finger wag at Sarah makes perfect sense ("Oh, Sarah, haven't you learned, yet?"). 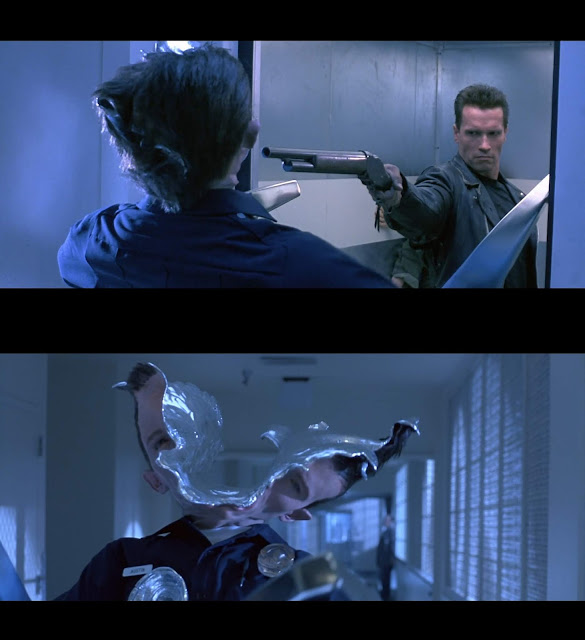 Either terminator is constantly taking damage; either is gradually undressed: the T-800 patiently robbed of precious tissue, until only a metal endoskeleton remains; the T-1000 injured to greater and greater extremes, until its ability to self-repair is compromised. The end result: a satisfying climax, but also monsters that are, themselves, revealed in stages. Before the ultimate reveal, plenty of time is allotted—for the viewer to imagine what Arnold and Robert are capable of, and for us to be surprised when Cameron ups the ante.

One test that constantly fails within the franchise is what I'll dub the "Cameron test." In other words, by comparing the latest Terminator  movie to either of Cameron's seminal classics, does it measure up? It bears repeating that Cameron's Terminator  movies aren't simply "good," by themselves; they stand shoulder-to-shoulder with each other. Each takes its time, and functions effectively within its own technological limits. That's the essence of the comparison: how well the replica can follow the original, winning formula, while still managing to be memorable, in and of itself. And while I enjoy Terminator 3 (2003), Terminator Salvation (2009), and Genisys, none of them measure up. Parts of them show promise; as movies, they're lamentably checkered.

What about Tim Miller, though? Certainly he has the technology to replicate Cameron's visual effects. After watching the trailer, I'm not so sure he has the patience, however. For one, the trailer feels rushed, effectively tipping its hand too far, too soon. In the very first scene, Miller not only shows the monster's true appearance; he also gives away its signature abilities: to repair, but also divide itself into multiple forms. Wherefore, Miller? By showing the villain's capabilities in one go, there's little to surprise us, later. There's no skeleton to reveal because we've already seen it; there's no second attacker to catch us off-guard (akin to The Ghost in the Darkness [1996]: "Jesus, there are two of them!"). 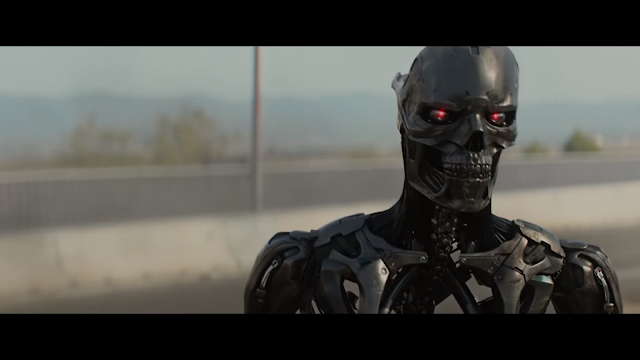 The carbon-fiber version—thankfully without enamel teeth, this time.

That's not to say the look of the new terminator is "bad." I happen to like the design of the endoskeleton. It's wiry and sleek (there's no a cranium, and the chest is hollowed-out) and it animates well; gone is the chrome sheen, replaced by ebony "bones" and "tissue." I also enjoy the skeleton and flesh as discrete (or separate from each other in a functional sense): The skeleton's shape is concrete; the liquid metal can assume different shapes whether attached to the bones or not. In other words, Luna's terminator can dissect itself, and attack with the bones and the guts.

Coupled with its black appearance, this new menace is almost a shadow, attacking the survivors from any direction. Case in point, when Grace, played by Mackenzie Davis, is on the bridge, she and her ward are cornered by an attacker who has essentially split in two: 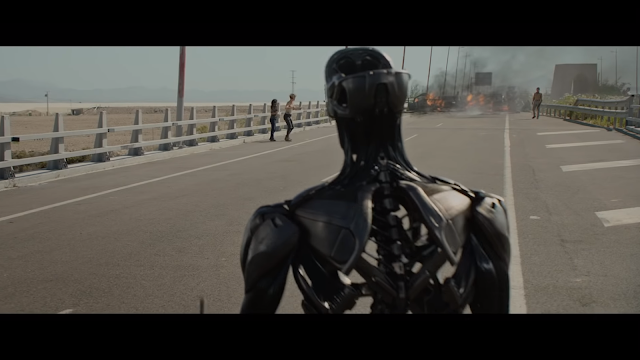 One attacker. Two bodies. No brain.

During this scene, I found myself thinking of twin panthers, closing in on their prey. It's less of a stealth hunter, and more of a pack. There isn't much terror to had, admittedly. All the same, the concept feels novel within the franchise, up to this point.

Still, novelty is cheap when overexposed. In terms of what the trailer actually shows, there's no subtlety to the killer's approach. Its transformation is slow and dramatic; there's no room to imagine anything. It "morphs" right off the bat, and in broad daylight. None of the shots attempt to "hide" this fact. Instead, we can easily make out intimate details, including Luna's ability to generate "clothing" (that's correct: metal pant legs). Conversely, when the T-1000 dispatches the cop, in T2, there's a cut—from Robert, naked, to Robert "wearing" the cop's "clothes." Only later, in the Galleria, do we discover the uniform to be false, and only later still, when the foster parents are killed, do we see a full transformation: 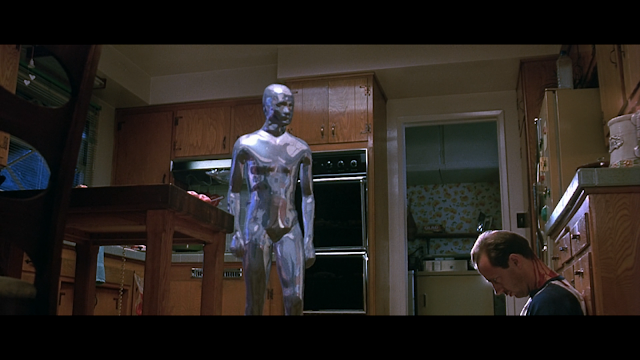 The first transformation—in reverse, and over forty minutes in.

Miller's lack of stunt people is also problematic. The trailer suffers from wanting to cram as much as possible into the frame without the risk that comes with real stunts (the stunt-double for Michael Biehn's alleyway "landing," for example). The onus is on the animation, but if the animation is even slightly off, it will betray the illusion. This is exactly what happens in the trailer. Luna looks almost weightless, jumping off the truck; his face, during the mid-shots, resembles that of a doll, not a human being: 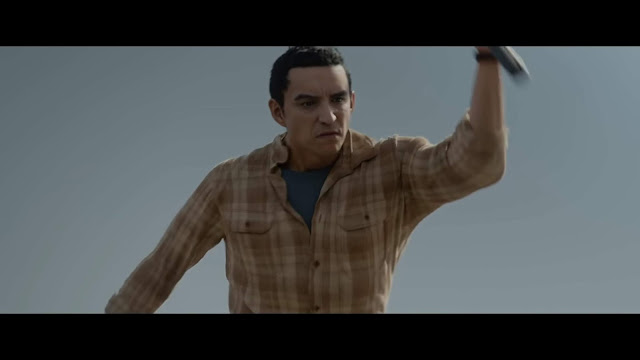 At least we know what the action figure will look like.

By constantly having the camera pointed at Luna, Miller always keeps his terminator in-frame. There's no off-screen space, nowhere for Luna to hide. Worse, without any shadows to conceal him, we can see everything about him, including the visual effect snafus. This last point is a major problem for me: Here is a creature meant to disguise itself as human. Yet, certain shots broach the Uncanny Valley by failing to digitally animate Luna's face! How ironic.

To read more about my thoughts on Miller's trailer, read part two here.