May 09, 2019
This article studies Gothic elements in The Terminator/T2 (1984/1991). Part one outlined their shared themes; part two (this segment) and part three examine their shared textual elements—The Terminator and T2's, respectively.

It's not how they're normally advertised, but Cameron's Terminator movies are quite Gothic. As part of the same franchise, their textual elements overlap, but their style—or treatment of this material—is idiosyncratic. I'll start with The Terminator and how it handles its own content. 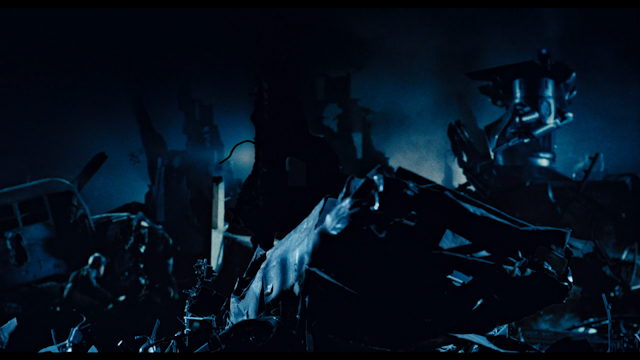 The shadows of 2029. These don't stay put, unfortunately.

The Terminator presents the past-future as a kind of a failed police state, a post-human dystopia. Its "future" replicates distant, war-torn countries L.A. civilians, in 1984, would only hear about on television; Skynet's future war eradicates humanity using humanity's own techniques (nukes, but also conventional warfare: tanks, soldiers and airplanes). However, its execution is still Gothic. Like Horace Walpole's The Castle of Otranto (1764), Cameron deploys gigantic suits of armor (the Hunter-Killer tanks) and smaller copycats (the T-800) to terrify and horrify the audience.

Skynet's titanic machines, the endless war zones they produce—these mirror what, for some people, is a reality often ignored by the peaceful, civilized world. Apply a swastika or hammer-and-sickle to the giant machines, and a six-pointed star to the uniforms of the rebels, and suddenly fantasy becomes all too real (although such historical groups operated under fantastical notions, themselves—the Third Reich, for example being a return to a Eurocentric "kingdom," with Nazis at its center and the Jews and other minorities living in the shadow of actual German castles, war and genocide).

T2 depicts a single, post-apocalyptic flashback (Sarah's dream of the nuclear attack is mid-apocalypse). By comparison, The Terminator has three post-war scenes scattered throughout (not including Kyle's post-war testimony to Sarah and Dr. Silberman); its bellicose reveries communicate a constant-but-additional aporia to the already-bleak, antebellum L.A.. There are day scenes, but most occur at night; and most of these are gritty and harsh before the machines arrive. Sarah, the heroine, must navigate and survive a Gothic nightmare, one that slowly invades her every moment (waking or otherwise)—at work, at home, outside. 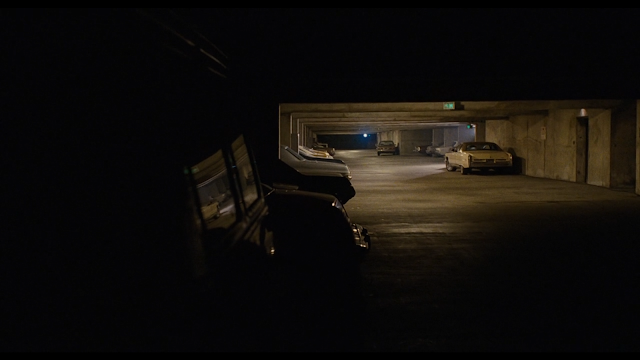 The killer is out there, somewhere... lurking.

Cameron's narrative is unreliable in part because Kyle is unhinged and Sarah, terrified ("Is Reese crazy?"). Kyle can't offer any proof to Sarah because future L.A. is all but gone; also, he arrives in the present, naked (no ray guns). Sarah is a victim no one takes seriously. At the same time, 1984 is invaded by a shadowy, murderous feeling that Sarah can feel, but not pin down; nor can she initially differentiate one man from the other. While Kyle and the T-800 look nothing alike, Sarah fears both; she also confuses Kyle for what the terminator actually is: "a one-day pattern-killer." Sarah cannot see what we see.

That being said, our "vision" is ambiguous, and not even our own. The flashbacks provided to us, the audience, are unclear in terms of whom is having them, or if they ever, actually happened. For example, Kyle's flashback by the oil-drilling team: In the blink of an eye, the tractor Kyle (and we) see no longer a tractor but an H-K. In Kyle's vision, we see him in uniform, accompanied by another soldier (female) as they try to take down the giant machine. It's hardly a fair fight, and they spend most of the time running, crawling or hiding. 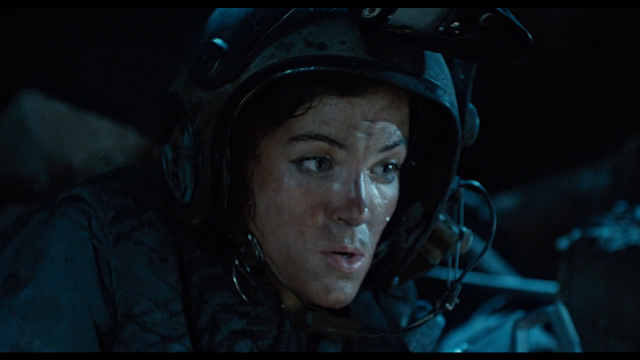 She is not named in the movie, nor listed during the end credits, but the female soldier was played by Linda Hamilton's stunt double, Jean Malahni.

During the vision, everything is smoky and dark, but also a ruin of present-day L.A.; the giant machines have red-and-blue lights. Comparable to present-day police cars, their purpose is war-like, out-of-control. When the woman in Kyle's vision is killed, her death is significant. For one, it foreshadows Sarah's potential demise, but also Kyle's hidden feelings for Sarah. The female soldier is also nameless; a blank slate, she doubles what Sarah must become to survive. After his comrade is killed, there's no time to mourn. Kyle makes a run for it, only to be driven off-road by a flying H-K. When the vision ends, Kyle awakens. Here, we learn he'd fallen asleep. The transition—from lucidity to sleep to waking—is unclear and never shown.

Another reverie is Sarah's dream. With it, we go from Kyle telling Sarah about where he's from, to another vision. There is no transition, and Sarah doesn't close her eyes; the screen merely fades from the underpass, and into the future...

Future Kyle is out on patrol. He wearily returns home, threading the dark, metallic sewers. In the compound, he is shown to be holding a picture of Sarah (we learn the picture is real, later on; for now, we have no idea why he has it). Suddenly the base is under attack, and nearly everyone inside is killed. Right when Kyle is about to die, Sarah awakens. She's in Kyle's arms. Because of the transition (she and he are both in-frame), it could have been her dream, or Kyle's flashback. The movie provides no means of separating them. As a result, it cannot be said with any authority that anything in the vision actually happened (or, in a Gothic sense, will happen again). 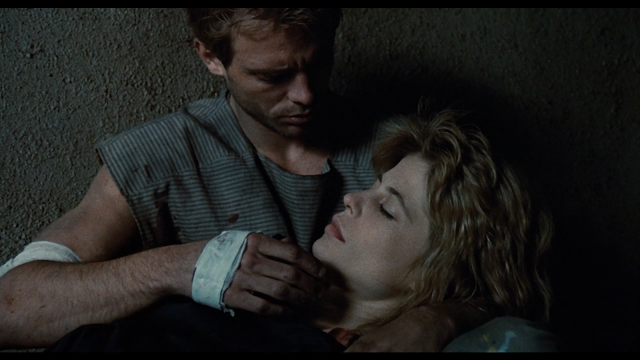 Whose "vision" did we see, Kyle's memory or Sarah's dream?

As it turns out, the photograph in the dream was real, but only in the "past." Kyle tells Sarah about it, at the motel; after Kyle is killed, a boy takes Sarah's picture, at a gas station. Inadvertently photographed, Sarah holds the artifact, bemused. Its materialization increases the odds that the rest of Kyle's warnings will come to pass. ("There's a storm coming." "I know."). Whether it be his vision or her dream, the nightmare never ends.

What's curious about this is how easy it is to deny the "reality" of the situation. When faced with a single killer, that's exactly what Sarah does. Indeed, the writers very intentionally present us with a humanoid villain, one that mirrors 1984 serial killers; he's not a cyborg from the future, but a man of flesh-and-blood ("No, he was bleeding."). Fresh off the shelves, Arnold's body count climbs. His victims just happen to belong to the same demographic L.A. newsrooms pander fear towards: women like Sarah (centuries prior, it would have been Ann Radcliffe or Clara Reeve, delighting female readers with their Gothic novels).

Arnold invades the present through a disguise partially his own, but also supplied to him by those under attack (the news paint him as a man, not a machine). The disguise is transient; even when its human tissue is burned off, the T-800 pursues the human survivors. The chase eventually leads through a dark, abandoned factory. Full of innocuous machines, these imitate the "automated factories" Kyle prophesied, in the parking structure. As the infiltration unit steps out from the liquid, mechanical facade, our ability to pin-point what or where it is becomes compromised. In Cameron's phantasmagoria, the element of danger persists, a perimortem state which lingers—post-immolation, -explosion, and -crushing. 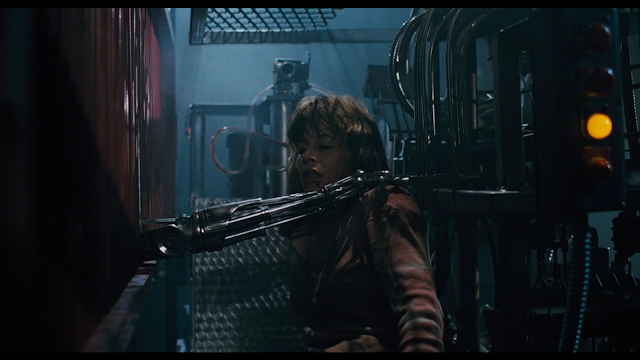 The metal hand of fate reaches through the veil to grab Sarah; the yellow light idles; the lightning, now fled, catalyzes her doom.

When the T-800 is smashed, it would seem victory has been attained, and Sarah is free at last. Instead, her act of defiance inadvertently fulfills her own prediction: "It will never be over, will it?" Kyle's transplanted future becomes Sarah's doom, and she races off to meet it. She and Kyle have traded places—this time, for good. "Their defense grid was smashed; we'd won. Taking out Conor would make no difference! Skynet had to wipe out his entire existence!" So, too, does Sarah's victory ring hollow, in the present. But her journey is forward, into the future, not backwards into the past. Like Skynet, she must proceed into the unknown to vanquish her die-hard nemesis.

Easier said than done; unlike Sarah, Skynet doesn't even exist yet, and most people see it as an unthinking machine. What horrors will she face beyond the mountains crowned with rolling thunder? Read part three to find out!
***
About me: My name is Nick van der Waard and I'm a Gothic ludologist. I primarily write reviews, Gothic analyses, and interviews. Because my main body of work is relatively vast, I've compiled it into a single compendium where I not only list my favorite works, I also summarize them. Check it out, here!
I'm an artist and a writer. If you're interested my work and are curious about illustrated or written commissions, please refer to my website for more information. If you want to contact me about a guest article, please use this contact form or reach out to me on Discord (vanderWaardart#5394)!