May 09, 2019
This article studies Gothic elements in The Terminator/T2 (1984/1991). This segment, part one, outlines their shared themes; part two and part three will examine their textual elements.

Gothically, a reoccurring theme in the Terminator franchise, from 1984 onward, is survival—outliving an unavoidable "past," in the present. A death omen, Cameron's nightmare is Orwellian; set in 1984, L.A. (and by extension, civilization as we know it) is invaded by "one possible future" (a "past" version of itself that has yet to materialize).

Cameron populates his world with standard Gothic fare: the animated miniature or statue. Centuries prior, these would have been Horace Walpole's subjects, literally walking out of their own paintings; or, suits of armor walking around, without a human body inside. In The Terminator, the likeness of a human is grafted into a walking suit of armor ("Inside, it's a hyper-alloy combat chassis—micro-processor-controlled, fully-armored, very tough..."). Another twist: these are simulacra (copies of non-existent objects: "I'm not stupid, you know? We can't make things like that yet!"). Given eyes of their own, they look back at us—at least, we think they do. What post-human horror lurks behind that carmine sphere? 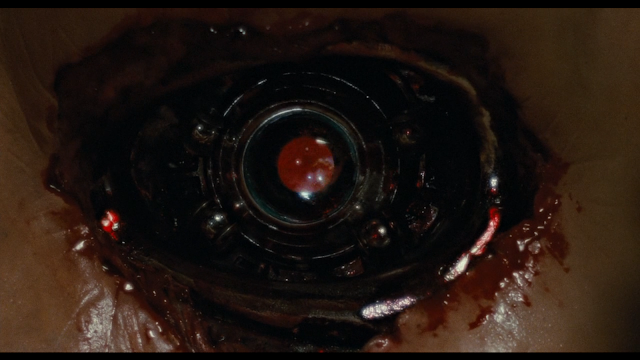 Is the red-eyed gaze of the terminator something to actually fear? Gothic-wise, the question matters more than the answer.

Either movie has a timestamp. Rooted in the present of what is now the past, Cameron's '84 and '91 come alive before our eyes. Audience members can return to this past, by viewing the movie(s) whenever they wish. In so doing, they enter it as a kind of structure, by which to experience the nostalgic, heightened feelings on display. As content, either Terminator becomes a kind of tapestry that affects its viewers. When perceived, both terrify and horrify the audience relative to a shared feeling—of aged, nebulous trauma.

Architecture and space are prevalent in the Gothic—often as a haunted house, but more generally as any form of civilization besieged by age, monsters and death. For Bakhtin, the Gothic castle's "narrative" was that of its content: a chronotopic ("time-space") hoard of symbolic richness. For example, regardless of the year, Cameron's L.A. operates like a kind of Gothic "castle." All the temporal markers are present: Nike shoes, automatic pistols in gun stores, and disco; Nintendo, Guns 'n Roses, and Danny Cooksey (aka "Budnick"). These are attached to their parent age, but imbued with an unhealthy past Cameron, the necromancer, conjures up time and time again. 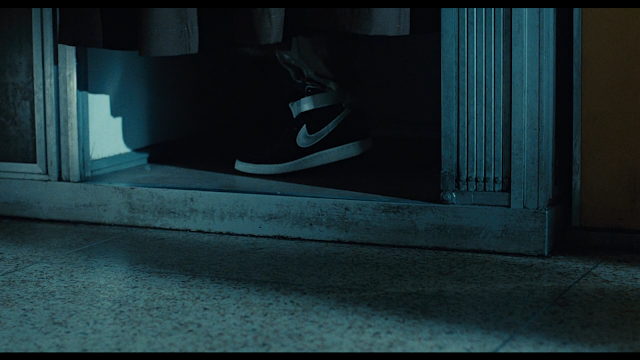 Nike—goddess of victory or a clothing brand? "Just do it."

Castle, cathedral—the analogy matters less than the fact that we, the audience, "stare and tremble." This passion is not fearful, in origin, but Gothic, a kind of perverse delight. Originally a vague historical period called the "gothic," the Renaissance was eclipsed in the 18th century by the Neo-Gothic Revival. The latter introduced a different attitude on "gothic" markers, including cathedrals. As Coleridge wrote: "When I enter a Greek church, my eye is charmed, and my mind elated; I feel exalted and proud that I am a man. But the Gothic art is sublime. On entering a cathedral, I am filled with devotion and with awe; I am lost to the actualities that surround me, and my whole being expands into infinite [...] the only sensible impression left is 'that I am nothing!'"

Coleridge may have been describing actual buildings, here; the sensation remains epistolary in nature. His own feelings are conveyed orthographically (through words) as a kind of eye-witness account. And what is a ghost story if not that? In the aging structure, such narratives relay feelings of a viewer waylaid by time, itself—more specifically the past as necromantic, embodied by the revived dead  (zombies, skeletons, and the like) and the trauma they promise, post-revival.

What is the T-800 if not a man-made monster—a mad, galvanized revenant whose ghastly genesis brings about the eventual fall of its proud maker? Victor Frankenstein experienced his Creature in a dream, only to forget about it (upon making it, the Creature's hideous gaze sends Victor into a heinous fit, and his friend must nurse Victor back to health; this takes months, at which point the Creature is being tortured for merely being alive). Upon its return, the Creature is incensed by a maker so aloof, so indifferent to its suffering. By comparison, Cyberdyne makes an unfeeling machine ("It decided our fate in a microsecond: extermination."). Skynet—and by extension, the T-800—has no emotions; it still excites Gothic sensations through its Gothic return. Look into the neon-lit, L.A. pall and see for yourself. 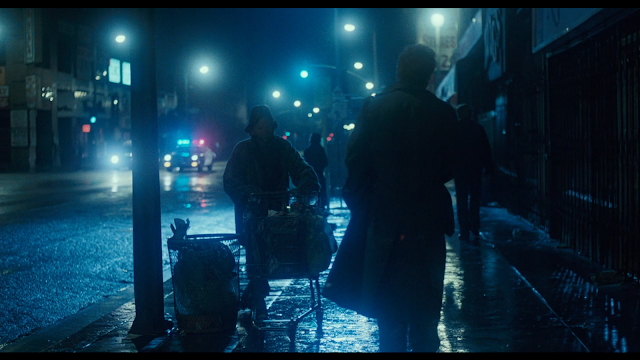 Note the hobo: as invisible, in 1984, as the survivors are, in the future.

To gaze upon Gothic omens is to fill the recipient with overwhelming feelings. One's life is seldom the only thing threatened, in Gothic stories; the mind of the witness is warped, including their testimony as something viewed in hindsight. The Terminator/T2 present sanity as threatened by shadowy spaces replete with more than robotic markers; they harbor imperiled human feelings. Such feelings are not isolated, but sit upon the silver screen amid everything else. As a "cathedral" to be viewed, visitors can repeatedly gaze upon the ghosts of the past: Kyle and Sarah, in the dark motel; or John, in the steel mill. Both movies offer an ongoing situation; amidst it, an awesome presence lurks—an Other that smashes humanity apart.

In The Idea of the Holy (1917), Rudolph Otto called this presence the Numinous. For him, it was a classification of existence—one experienced in the presence of what he deemed the mysterium tremendum, or "tremendous mystery." Before Otto, Edmund Burke wrote on the Sublime, "I am satisfied the ideas of pain are much more powerful than those [...] of pleasure." Both men connected whatever feelings the mystery imparts to the power it evokes. As a kind of textual fossil, the Other strikes modern viewers dumb. So, too, does Cameron's The Terminator/T2 provide the Other as something to see—not Skynet, but Skynet's shadow. Through his camera lens, we see the Other as demonic: through the crimson glower of the exfoliated T-800, but also within the murky gloam of a fourth-dimensional ruin (the space by which the killers operate). We look; the abyss looks back.

Keep in mind, Burke argued for pain as responsible for such feelings, not pleasure. As a woman, Ann Radcliffe viewed terror somewhat differently. In her 18th century novels, terror is viewed by a heroine whose traumatized testimony the reader enjoys; it amounts to imagination as heightened by an obscure presence. In the shadow of "the dreaded evil," Radcliffe allots room for pleasure, a kind of "exquisite torture" felt by heroine and reader alike ("Sit down, you are going to love this! / You're dead, honey!"). Their mutual delight conveys Burke's pain as paradoxical: There is no pain; only fear of pain as promised by words on a page. 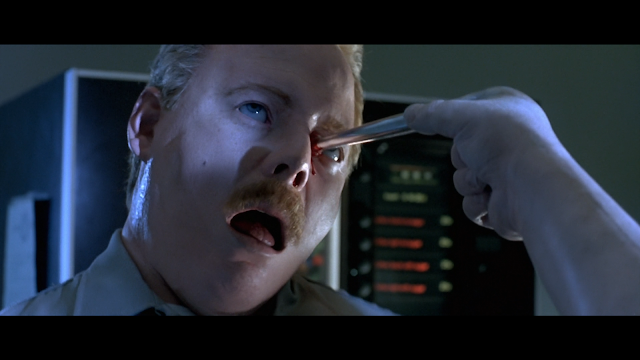 It's not his lucky day; it's ours.

Any agony in The Terminator/T2 is something to gaze upon; so is the pleasure that results from it. Any escape from Cameron's Gothic past—or murder by its cybernetic hand—can thrill, and thrill again. Likewise, Gothic conventions demand "sacrifice." Through such "death," the audience can indulge in paradoxical comfort, all according to the fear of a past that never was. The Goths never invaded England; in 1984, Skynet had yet to attack L.A.. What matters is the feeling—that they "did," or could invade "again."

Cameron's movies are part of a grander, Gothic tradition. Sarah was not the first Gothic heroine, nor the last; nor were audiences in '84 or '91 the last to view Cameron's work. By interweaving textual elements with perennial fears, Cameron addresses what were, once-upon-a-time, present concerns. On-screen, these predicaments are viewed as "the past," but an omen thereof, not a concrete reality.

On either side of the screen, humanity endures. Ensconced by Skynet's shadowy fortress, Kyle and Sarah's love grows through pain—by surviving a post-human menace. John's love for the T-800 grows, until the mere thought of Arnold's death brings the boy to tears. To varying degrees, audiences spectate to address their own, everyday concerns. Outside the theater but relative to its content, viewers envision murder, rape, and war as continually prophesied. Should the theater be used to "escape" such matters, the audience will inevitably be followed inside (try to imagine their disappointment, if this weren't the case).

Cameron's story wasn't new, but part of a grander story-telling tradition. The way it gels as a Gothic 1984/1991 zeitgeist, though—this gives Cameron's work a unique sense of pathos and time. Through Arnold, I see the perennial man-in-black; his mask and clothing standards for the demon monk Radcliffe and Mathew Lewis produced in their own work: the poisonous, stiletto-packing Schedoni, to the incestuous Ambrosio. I also see Mary Shelley's hulking Creature, Fritz Lang's Maschinenmensch, or slashers like Jason and Michael, in their tell-tale masks.

A large part of this tradition are the textual symbols, which carry over from sequel to sequel. In a modal sense (the Gothic is a mode), Cameron's The Terminator  was a spiritual sequel to older Gothic stories, from Harlan Ellison and reaching backwards. Symbol of violence and death permeate the screen, including Arnold as the iconic, time-traveling killer. His outward guise is always the same; our feelings towards him as an audience are not, are instead manipulated by Cameron. His franchise conveys unique iterations of staple Gothic tropes per movie; the haunted house and the murderer—these look vastly different through Cameron's lens from either decade.