In case you missed it, read part one!


[editor's note: Most of my questions about the contest, itself, are based off the contest brief, on Tongal's website.]

Nick: Kolton Brown was the man who finds Al’s body, was he not?

K & S: Yes, indeed. Played by Steven Stiller. He is such a great guy! 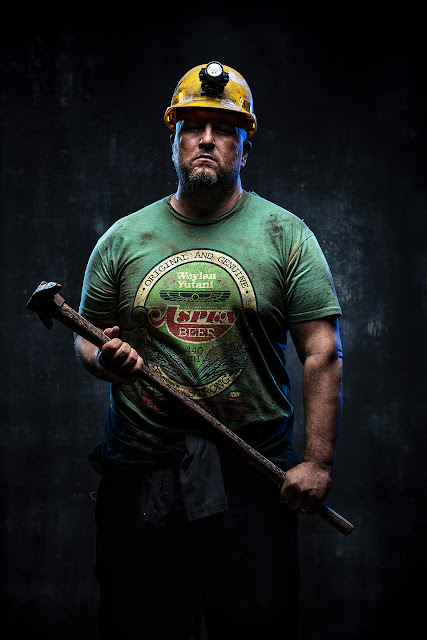 Nick: Having the Aspen Beer logo on his shirt was a nice touch. Whose idea was that?

K & S: Thank you! We liked that one. We figured there would be at least one guy in this colony who would be the type to wear a beer shirt to work. Kolton was that guy. It was our idea to include the shirt. We had wanted to find little ways to connect the worlds of the original [Alien (1979)] and this film. There were no scenes where the characters would be drinking Aspen Beer, but someone could be wearing an Aspen Beer shirt. There are a bunch of little references like that we dropped throughout the film. Watching your review video, we saw that you caught a good number of them! [editor's note: Now I'm wondering what I didn't catch...]

Nick: With Steven's performance, was he, by chance, channeling Harry Dean Stanton?

K & S: He was doing his own thing, but we like that you bring up Harry Dean Stanton. We see their characters as sort of similar in that they have a bit of trouble communicating with the others. In a group of people, there is always going to be someone like that. [editor's note: In Gothic stories, the monster can either hidden (terror) or shown (horror). In either case, a human victim often perceives what is hard to describe ("It's like a man; it's big!"). For a good, albeit silly example of this, watch Young Frankenstein (1974).]

Nick: Set-wise, was the locker room a sound stage?

K & S: The locker room was shot in an actual building; a lithium-ion battery R&D facility. We brought some set pieces in. It was actually shot in the same building that Hanks' office was filmed at. 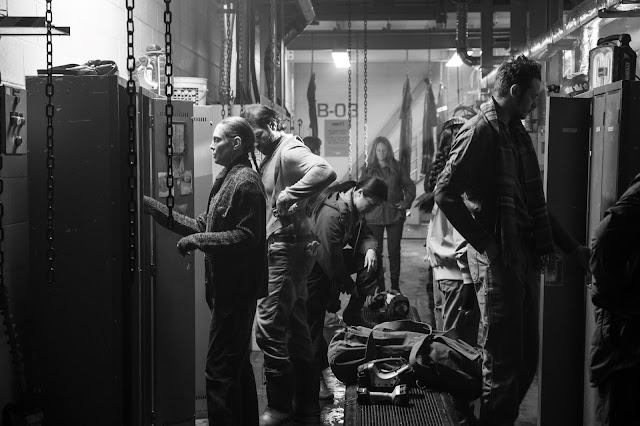 Nick: What about Hanks' office?

K & S: Hank's office had the bare bones of the desk in it already, but Cheryl [Marion] and her team brought everything else in to dress it properly. 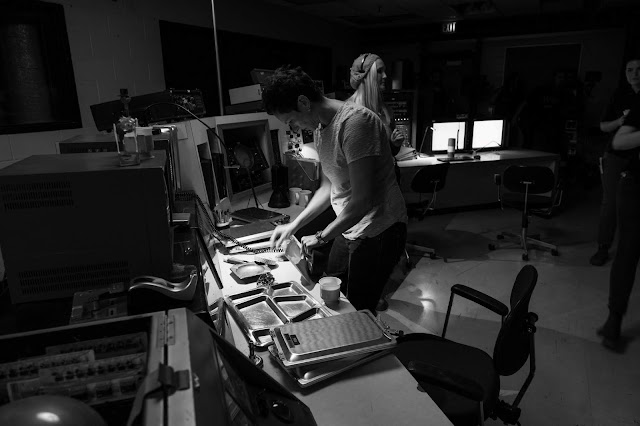 Nick: Where was the exterior shot for Bowen’s Landing filmed?

K & S: The exterior of Bowen's Landing was shot at Britannia Mines. Around where you see the miners walking into the building is Britannia mines, but the team at Image Engine extended the shot to create the rest of the building around it. In reality, there are many lovely trees around the building, but that didn’t work for the "hostile planet surface" we were going for. 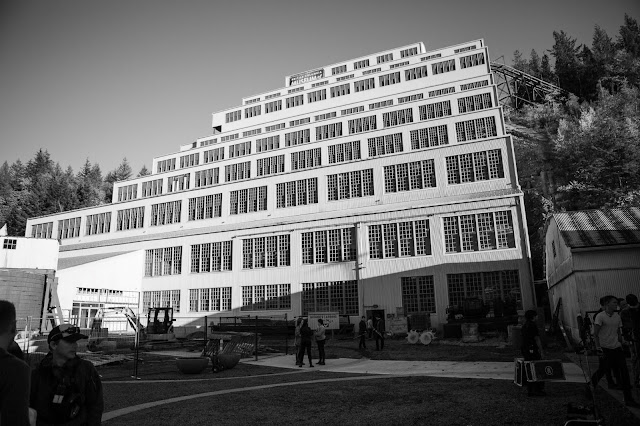 Nick: Only your short and two others featured an adult xenomorph, but yours was easily the most mobile. Your xeno leaps from wall to wall, at one point; was this done with wires, or in post? In other words, were any of the creature shots entirely digital, or was the xeno performer, Christian Lagasse, simply "touched up" like the actor was, in Alien: Covenant (2017)?

K & S: This was done completely in visual effects. We didn’t have the budget for the rigging that [shot] would have required practically. We loved what the team at Image Engine was able to do with that leaping shot in particular. Giving it that dynamic motion brought such a wonderful creepy lethal quality to it. Christian’s work was used for reference movement, placement, and lighting material to give to the visual effects artists as well as blocking with the miners.

Nick: I loved the inclusion of a dog, this time around!

K & S: Wasn’t he great? His real name is Sidney but we named him Dan—after Dan O’Bannon, the screenwriter of the original [Alien] (as well as our editor, Daniel Jeffery). [editor's note: In Alien: Covenant, androids David and Walter were similarly named after Alien producers David Giler and Walter Hill.] 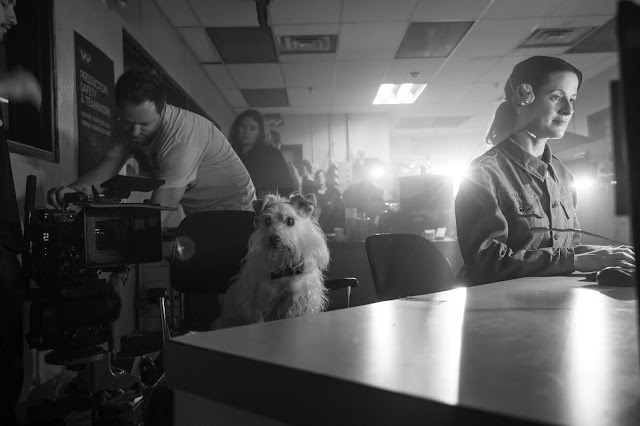 Sidney on set, next to Tara Pratt (courtesy of Greg Massie).

Nick: Who is Sidney's owner?

K & S: Grace MacLeod was his handler, who was on set with us. She was terrific! Ian Doig is part of Sidney's family as well. He is who we reached out to when we were looking for our dog cast as he is an excellent [animal] trainer in Vancouver.

Nick: Did Sidney behave, while on set?

K & S: Oh my goodness, did he ever! Sidney was such a freaking pro, it was insane! He was so in tune with what Tara was doing. There wasn’t actually anything playing on the screens that he was reacting to, but he would sense what Tara was doing and [react] to that. There is a moment when the screen is supposed to flick on, and it catches Hanks' attention (the "Hanks, is this thing workin'?" moment); the screen was just a green screen, so there was no image popping up, but at that moment Sidney could sense Tara reacting to the screen, so he looked over at it, [too]. There were many moments like that we spotted while editing. He was great.

Nick: Scott made Jonesy hiss by having a dog, off-camera; Cameron used another cat Jonesy didn’t know. How did you get Sidney to bark at the monitor?

K & S: Grace had commands that she would use to get him to bark and to whine. They were great at working together. 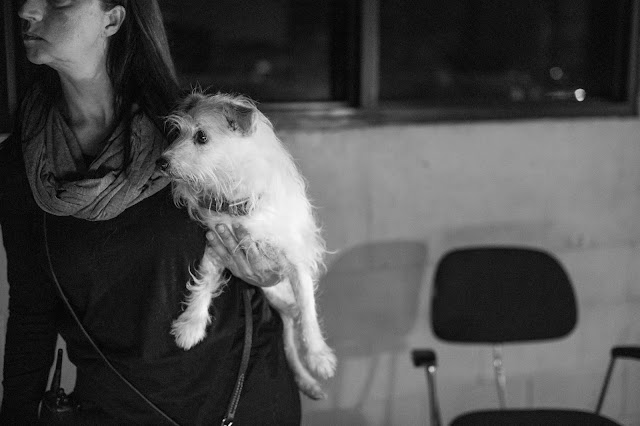 Sidney with his owner, Grace MacLeod (courtesy of Greg Massie).

Nick: Post-production is listed as taking three months, from December 21st to March 29th. What was the last shot before production wrapped?

K & S: Hmm... it must have been a xeno shot; those ones were tweaked until the end.

Nick: The quality of the rendered shots (the xeno, and the planet) were pretty impressive! I assume the digital effects were handled in post, once production had wrapped and you sent FOX a rough-cut of your shoot?

K & S: Yep! You are absolutely right. We sent a rough cut with writing that said what we would be doing. Sometimes we put in storyboards—[of] where the xeno would be, or [the] planet—to give a better idea of how the story would play with those shots included. 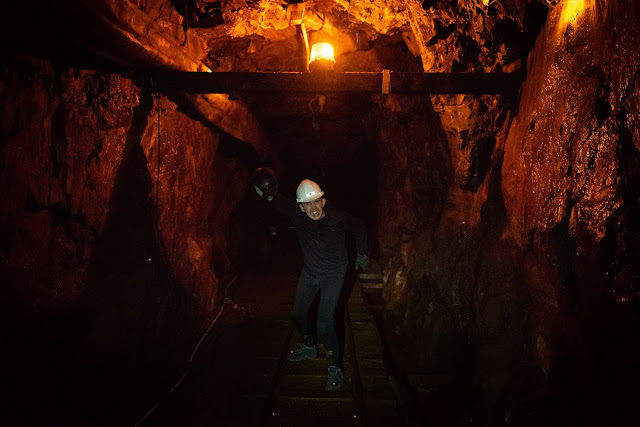 Nick: How long did the digital visual effects take to complete?

K & S: Our team was working on the visual effects shots right until the end.

Nick: The space shots were stunning. Could you shed some light on how those were made, and if any of the space shots from the series—i.e., Prometheus (2012)—were an inspiration?

K & S: That was the team at Image Engine again (they were visual effects shots). We had reference material for the kind of thing we were looking for, but they created the design. The original "lonely planet shot" [was] actually inspired by our wardrobe designer, Barbara Gregusova. We had taken a photo of a flashlight against the rock wall on our location scout: a sphere of rock surrounded in blackness. Barbara mentioned when she saw it that it "looked like a planet." That is [also] where the idea of the transition—from planet to mine wall—came from. What it evolved into was inspired by the "lonely ship shot [of the Nostromo]" from the beginning of the original [Alien]. But yes, it is quite similar to the opening of Prometheus, too— 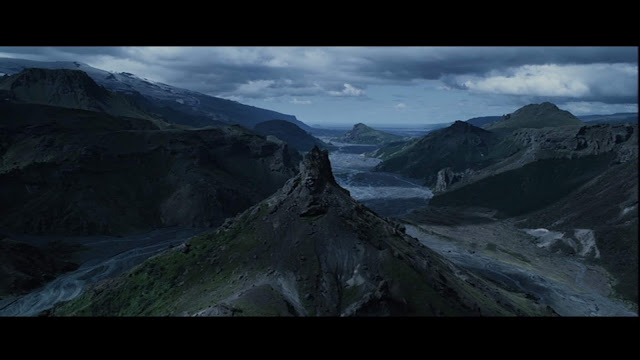 The ancient planet from Prometheus. [editor's note: Scene like these portray prehistoric or "planetary age" with repeated images of stony and glacial landscapes. Similar imagery has also been used in 2001: A Space Odyssey (1968) and "Alien: Ore."]

Nick: Editing-wise, were there any scenes you wanted to include, but wound up leaving on the cutting room floor?

K & S: There were some other xeno shots that got the ax. There were also some nice reactions [from,] and shots of, Anna’s group of miners that we liked. But the cuts were all for the best. Really, once we got to shooting not much changed. The shots we got were the shots we used. 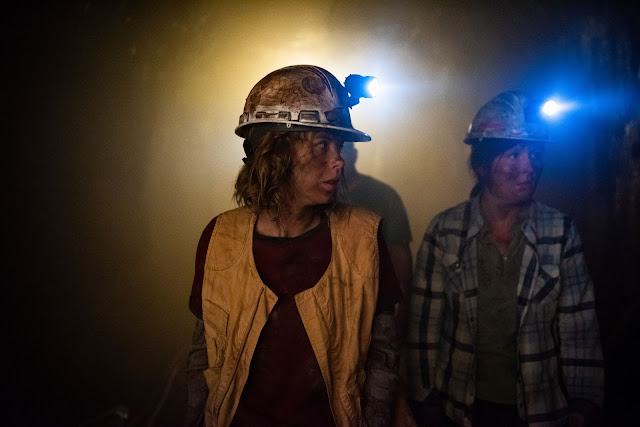 Nick: Was any particular part of the contest especially difficult? For example, were producing a winning synopsis and pitch “easier” than pre-production; was pre-production easier than production and post, etc?

K & S: All stages have different types of ups and downs that come along with them. Writing is the most manageable (as it is only us working away), but it can be difficult knowing [that] what you are writing may never get to screen. Pre-production is fun as it is where we really get to hone in on the more tangible vision for the film, but it is also were the hard choices are made: what the parts of the vision need to be cut down and reworked to fit with the reality of what can be done with the time and budget allotted. Production definitely has the most balls in the air that need to be juggled, but it is also where you really get to see things come to life. Post is probably the most finicky part of the process, but it is also such a great time as it is where the story really gets to be molded and then finally settle into the final product.

Nick: How happy are you with the final product? Did it turn out better than you expected? In hindsight, would you do anything different?

K & S: We are so proud of our wonderful team’s work on this film. This was a passion project, and everyone brought so much talent, care and respect to every aspect of this film’s creation. The process of working with our team was truly better than we expected. When you get that big of a group together, there is usually bound to be a couple stinkers, but every single one of the people who came on board was an absolute joy to work with. It was a very special thing being able to be surrounded with such magnificent humans throughout this whole process.

Nick: Given your experience with “Alien: Ore,” would you return for a feature-length sequel if that were an option?

K & S: In a heartbeat we would! There is so much we imagined for the Bowen’s Landing colony that you don’t see in this film. We have so many ideas about other characters you would meet, other parts of the colony that you would explore. With a bit more budget, we would love to see what kinds of mining equipment that these miners would use. To get the mining work done, we imagine [the miners] "suiting up" in something along the lines of the power [loader] Ripley uses in Aliens (1986).

We think that this mining colony story would actually really suit a six- to eight-part miniseries where you follow the community as they discover the eggs and are faced with the threat of the xenomorph or... xenomorphs! And perhaps along with some new threats and wonders we have not yet seen... [editor's note: Admittedly the series has a rough track record with new monsters. But for every Newborn, there's a Queen or Hammerpede.]
***
About me: My name is Nick van der Waard and I'm a Gothic ludologist. I primarily write reviews, Gothic analyses, and interviews. Because my main body of work is relatively vast, I've compiled it into a single compendium where I not only list my favorite works, I also summarize them. Check it out, here!
I'm an artist and a writer. If you're interested my work and are curious about illustrated or written commissions, please refer to my website for more information. If you want to contact me about a guest article, please use this contact form or reach out to me on Discord (vanderWaardart#5394)!