Room for Both: Horror and Social Commentary in 3 Japanese Classics, Part 3

This is part three of a three-part cross examination of three mid-20th century Japanese movies: Hiroshi Teshigahara’s Woman in the Dunes (1964), Toshio Matsumoto’s Funeral Parade of Roses (1969) and Kazuo Hara’s Extreme Private Eros: Love Song (1974). It describes my love for Japanese cinema, and how prolonged exposure and reflection allows me to see these three movies as exceptional horror films, despite not being what I’d call “pure” examples. Read part one, here; two, here. 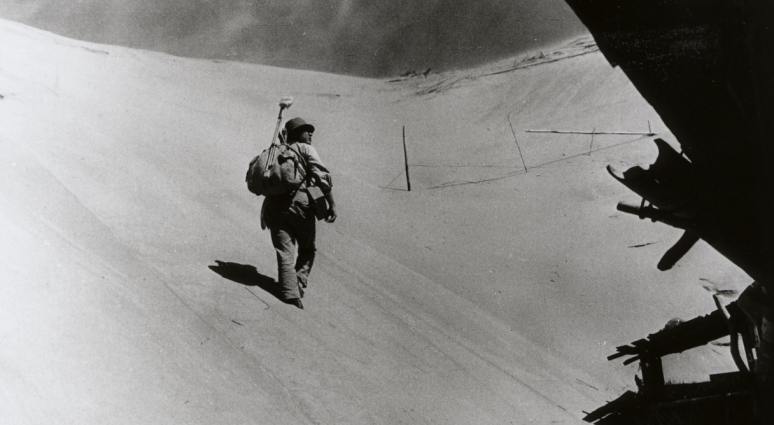 My partner and I love to show each other movies. Our mutual aim is to show the other something different, and to explore new things together. Neither of us had seen these three movies. I wasn’t quite sure what to expect. However, lacking a better way of putting it, none of the movies—based on their premise, cover or pedigree—screamed “horror!” They sounded like dramas, more interested in social commentary. What I didn’t realize is there was plenty of room for both.

All the same, I was interested by them, having been deeply fascinated with Japanese movies ever since I was little. One of the first Japanese movies I saw was Kurosawa’s Seven Samurai (1954). Having repeatedly heard it to be one of the greatest movies of all time, I decided to watch it; I loved it, and showed it to my friends and family (and their friends). To this day it’s one of my all-time favorites.

From Kurosawa’s own canon, I also saw Ran (1985), Throne of Blood (1957) and Stray Dog (1949). By the time Kurosawa did Ran, he was no longer working with Toshiro Mifune. However, from 1945-68, the pair had done 16 films together. Needless to say I was exposed constantly to Mifune on-screen; he always had a starring role, always hit it out of the park. I was engrossed with his talent, and Kurosawa’s. However, whilst Mifune remained as prolific as, say, someone like Clint Eastwood, I daresay he managed it without the burden of only being portrayed as a man of few words (whereas Eastwood made a career out as just that).

Watching Mifune, I realized how varied he could be: In Throne of Blood and Seven Samurai, he was over-the-top, demanding your attention. And yet, in movies like Kihachi Okamoto’s Sword of Doom (1966) or Hiroshi Inagaki’s Samurai trilogy (1954-1956), he displays much more reserved warrior—in the form of Toranosuke Shimada or Musashi Miyamoto, respectively. That variety certainly didn’t hurt his career or the notoriety that came with it; he continued to acting for another three decades, but (for better or worse) would always be the man who played Kikuchiyo, Tajômaru and Miyamoto.
To this, one can note a cross-cultural heritage throughout worldwide cinema: In seeing Inagaki’s aforementioned trilogy, it was for me hard not to compare it to Leone’s Dollars trilogy (1964-66) that followed, ten years later—just as I struggled not to compare John Sturges’ The Magnificent Seven (1960) to Kurosawa’s Seven Samurai.

This is because movies mirror each other. It just happens. Likewise, so do actors: I see Mifune’s varied career and find myself thinking of Robert Redford and Paul Newman, working together as reversible, polarized opposites in the George Roy Hill movies Butch Cassidy and the Sundance Kid (1969) and The Sting (1973). Good actors should play against type—if not, should own it (see: Eastwood). The best do both (see: Mifune).

The point here is that movies are flexible, as are their actors. Mifune wasn’t restricted by what made him famous, early on. Instead, he evolved, demonstrating himself capable of being more than anything suggested by his outer layer (that, and he had expensive appetites—bills that weren’t going to pay themselves). Thus, as of now I can’t simply look at him and assume anything concrete when watching a new (to me) movie, from his extensive canon—anymore than I could of Robin Williams, Max Von Sydow, or Peter O’Toole.

Williams has made more garbage than I so easily list, here; he’s also starred in excellent movies like (according to me) Seize the Day (1986) and (according to most people) Good Will Hunting (1997). Max Von Sydow starred as Antonius Block in the seminal The Seventh Seal (1957) and Ming the Merciless in the guilty pleasure that is Flash Gordon (1980). O’Toole immortalized himself as Lawrence, in Lawrence of Arabia (1962) then co-starred in the frankly-awful Supergirl (1984).

Perhaps they needed paychecks. Mifune certainly did. Then again, it didn’t stop Frank Langella from delivering a wonderful performance as Skeletor, in Masters of the Universe (1987). His thespian heft doesn’t change the fact that the movie is mostly sub-par, but at least Langella is having fun; if not for that, the movie wouldn’t be any at all, for us. It just goes to show that, when dealing with movies and their actors, you shouldn’t judge a book by its cover—or, as James "J.Y." Young from Styx once said, “sometimes the cover makes the book.”

The same is true with Woman in the Dunes, Funeral Parade of Roses and Extreme Private Eros: Love Song. Each is a black-and-white Japanese movie from the mid-20th century. As I watched each, it seemed straightforward enough: drama, and society commentaries on controversial topics. However, as things progressed, I realized I was dealing with a trio of films that worked just as well as horror as anything else. I went into them with my own subdued expectations—least of all, the sort of classic horror provided by Carpenter, Cronberg or Scott. At the same time, I also wasn’t surprised to have these predictions obliterated, given the sheer potential contained within Japanese cinema, as demonstrated by Kurosawa, Okamoto or Inagaki. Instead, as each movie proved itself capable of being more than whatever I simply predicted, I was delighted to be proven wrong.
***

My name's Nicholas van der Waard; I have my MA in Gothic English literature. Originally this blog was dedicated to my love of movies; now I use it to write about the Gothic—in movies, but also videogames (especially Metroidvania, which I wrote my thesis on).
Best Metroidvania? Not sure. If it were harder, Castlevania: SotN (1997); if it were more open-ended, Metroid Fusion (2002). Hollow Knight (2017) and Metroid: Zero Mission (2004) rock; so do Axiom Verge (2015) and Dead Cells (2017).
Some of my favorite movies include: The Passion of Joan of Arc (1928), Seven Samurai (1954), and Alien (1979).