June 09, 2018
The trailer for Halloween (2018) is finally out, but was it worth the wait? For me, the short answer is, "Hell yes!" The reason being, the movie advertised within looks not like a carbon copy of the original, but ventures in new directions while capturing much of the same classic tone, themes and content. Faithful, but re-inventive, it looks like a really good time.

Note: As I tend to go into detail, and love close-analysis, a longer write-up of the trailer is in order. However, seeing as there's much to discuss, I can't possibly cover it all at once. As such, I've decided to divide this into two projects. The first will be a write-up covering the trailer in as much detail as possible. Look for that, in the coming days.

This piece is the second of the two: a three-part essay that has me analyzing the trailer relative to my own history with the franchise, and as a student of Gothic literature, cinema and videogames. Part one covers my history with the franchise, and the artists who make these movies; part two, the trailer's Gothic themes; and part three, a continuation of those, but also Laurie and Michael's relationship, onscreen, in the trailer. SPOILERS! 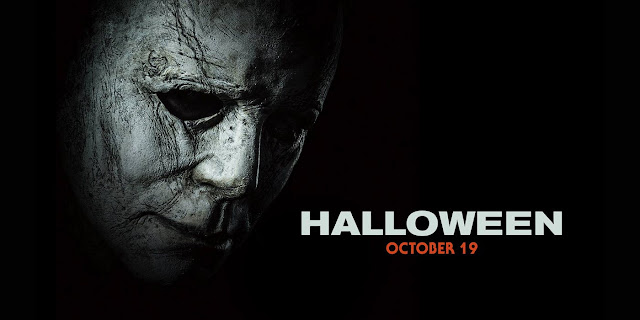 I'm not a purist. I initially saw the original Halloween (1978) on Netflix, in 2010. Before that, I had only seen snippets of Halloween 3: Season of the Witch (1983) on cable. However, I wasn't overly familiar with John Carpenter's work, and in fact had only seen The Thing (1982) and Big Trouble in Little China (1986) on VHS. Regarding the latter, I had no idea that Carpenter had even directed it; it felt like the work of someone else. Looking back on it, now, it feels like signature Carpenter (in fact, his name even appears, in that movie: when Egg Shen drops a Buddha statue on the last of the Three Storms, the recipient collapses into a fiery hole; from the flames, lightning shoots upwards and writes Carpenter's name in Chinese characters).

Watching the original Halloween was like rediscovering Carpenter, for me, and I immediately fell in love with both the film and his other works. Oddly enough, while Halloween went on to become one of the most successful independent horror films of all time, now-cult classics like The Thing and Escape from New York (1981) weren't as lucrative. Throughout the 1980s and '90s, Carpenter struggled within the American studio system to make a successful film on par with his former classic. That's not to say that he routinely bombed, but apart from Starman (1984) didn't fare as well with critics. His other pictures certainly made money but not enough to consider Carpenter a reliable cash cow.

Michael Myers cast a long shadow, one Carpenter never managed to escape. In this sense, it's only fitting to see the man himself return, in order to help jolt the franchise back to life. After all, he created it. However, instead of returning to the director's chair like Ridley Scott, Carpenter has instead chosen to executive produce the film. To that, I'm still not entirely sure what an executive producer does, but given Carpenter's perennial reluctance to return to Hollywood, I doubt the latest Halloween will have him directing behind the scenes, as Spielberg reputedly did with Tobe Hooper's Poltergeist (1982). All the same, I'm pleased to learn that Carpenter is at least providing the music, and thank God! While I have heard imitators come close, no one does it quite like him, and the film wouldn't be the same if they used someone else (the Rob Zombie versions used Carpenter's themes, but as remixed by Tyler Bates; the end result sounded somewhat bland by comparison).

On this note, the trailer immediately profits from Carpenter's signature work. The themes are instantly recognizable, and forty years later still make one's hairs stand on end (the footage has also been expertly cut to play in time with the music). That being said, some of the sound effects from the original are recycled, too, including the sounds used for Sam Loomis' snub-nose revolver (complete with a black screen, flashing white to simulate the muzzle flashes). It makes me curious: Will Carpenter take any liberties with the material? Will we get the same classic audio cues that we did, in the original ("Turn around, Jamie!")? Time will tell, but I'm always excited to hear the Master at work. Following early screenings of the original movie, Carpenter's son evidently told him that other audience members didn't close their eyes, they covered their ears. I hope to experience that, myself, come Halloween night. 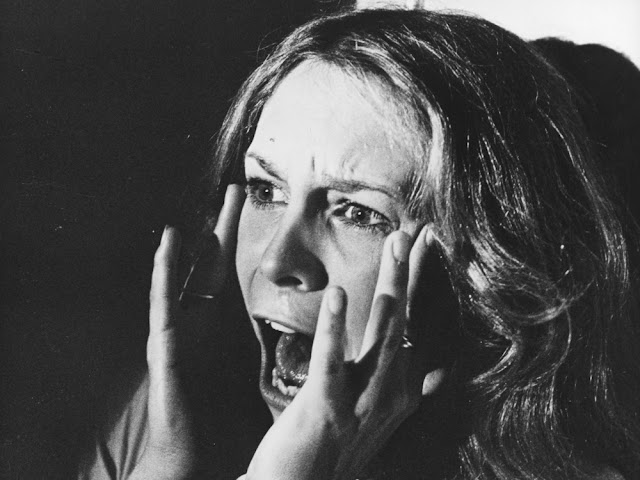 The movie itself is being directed by David Gordon Green. At first glance, this might seem odd, given there's nary a horror film in his entire portfolio. I'm not too worried, though given that McG directed The Babysitter (2017) and still managed to deliver the goods. Likewise, Green and Danny McBride wrote Halloween  together, as well as collaborating on The Pineapple Express (2008), which Green directed.There's a sense of camaraderie between them, and horror know-how.

Certainly McBride is known for comedies, but Tropic Thunder (2008) revealed another side of his real-life self: that of a movie-lover. Incidentally Ben Stiller directed that movie, as well as directing the black comedy The Cable Guy (1996). Despite being a comedy itself, Tropic Thunder contained plenty of elements that paid homage to classic films, including Apocalypse: Now (1979) and pretty much Al Pacino's entire catalog. In particular, Jack Black discussed the idea—of the hidden monster as being more frightening—in Tropic Thunder's commentary track; during the scene with the "killer" panda, Black compared the attack, itself, to the xenomorph, in Alien (1979).

So, let it be said people are full of surprises, and that nothing exists in a vacuum; just because actors are typecast in a particular genre, they can have expertise in other areas. Certainly Danny McBride emerged neatly onto the horror scene, with Alien: Covenant (2017). It was during the production of that film where he expressed his interest in horror movies, announcing his own work as one of the writers for an upcoming sequel to the original Halloween. It would seem that project has finally  come to fruition, and no one could be happier than yours truly.

One, the movie is low-budget, and produced through Blumhouse Pictures. That studio has gone on to make many successful horror movies, my favorite being Jordan Peele's Get Out (2017). All the same, they're used to working with smaller budgets, which, in and of themselves, can give a movie a very particular, down-to-earth look; it's part of the reason the original Halloween worked so well despite the obvious palm trees and California license plates in an "Illinois" setting.

Two, the fun in smaller productions comes from them being tight-knit. What's especially exciting in this case is the relationship between McBride and Green, when comparing their relationship to Carpenter and Debra Hill's. That is, the original worked as well as it did because it was a labor of love between those two (who were dating, at the time). He directed, and she produced, and the screenplay was penned by both. According to Hill, she wrote the dialogue for the girls (and held the knife during the POV shot in the opening scene); Carpenter brought the dark stuff to the fore. It worked for them. It also worked for James Cameron and Gale Ann Hurd (to whom, according to legend, Cameron sold the screenplay for The Terminator [1984] to, for one dollar). 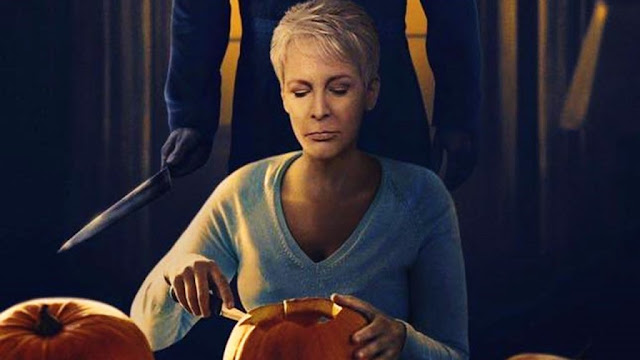 These great classics were made with small budgets, between small teams of friends and lovers—all of them working together to make something excellent. As a fan of these older works, I'm glad to see a similar arrangement in place for Green's upcoming sequel.