June 15, 2018
Here is part three of my three-part review of  Halloween II (1981), where I close the review by looking at more of the good stuff the movie has to offer. In part one, I looked mostly at things I liked, larger themes, and the music; in part two, I examined what I disliked.

Halloween II  is far from perfect, punctuated by a lack of tension and general limp feeling felt throughout—odd, considering it has plenty of chase scenes, or dark rooms with dead bodies in them. All the tricks Carpenter did so well, in Halloween (1978), Rosenthal struggles to get right, in Halloween II. Part of it is that Carpenter spent a lot of time introducing us to a small cast in an isolated, carefully controlled setting. We had time to get to know these characters, and watch them respond. Take Tommy, for instance. He’s introduced fairly unobtrusively early on, when he greets Laurie on his way to school; then, another, with the bullies (“He’s gonna get you!”) and another when Laurie is reading him King Arthur (not sure which version). It's the same idea with Laurie, Lynda and Annie. In Halloween II, there’s too many characters, and almost no time to get to know any of them. Most of them die off-screen, reduced to props. At least in the Jacobean play The Duchess of Malfi (c. 1613), the Duchess is terrified when Ferdinand, in a dark room, shows her the wax sculptures of her "murdered" family. This is because she knows them (and Laurie knew all of the corpses, of Annie, Bob and Lynda, in the bedroom, before Michael springs his trap, in Halloween); we know none of the corpses in Halloween II, and the characters finding them are never Laurie.

It’s not all a train wreck, though. Rosenthal does manage to light certain scenes well; the police cruisers come equipped with the creepy green light emanating from the dashboard, much like in did for the nurse’s station wagon, in the original, and the flashlights are oversaturated and brilliant. Some shots of the Shape look alright (some). While most of the kills are pretty weak, I enjoyed the shot of the final nurse being lifted off the ground until her shoes fell off. It wasn’t rushed, for a change, and we actually had time to process what was occurring before our eyes; we could see it from different vantage points, much like Bob being tacked to the wall, in Halloween. In that movie, we see Bob and Michael struggle with portrait shots and mid-shots; then feet, then the knife, then stab; feet drop, then a full-body shot. In Halloween II, the approach is similar. I especially loved Laurie turning around, and then through her point of view we see the entire hall, with Michael holding the nurse several feet off the ground. It really establishes how physically strong Michael must be: 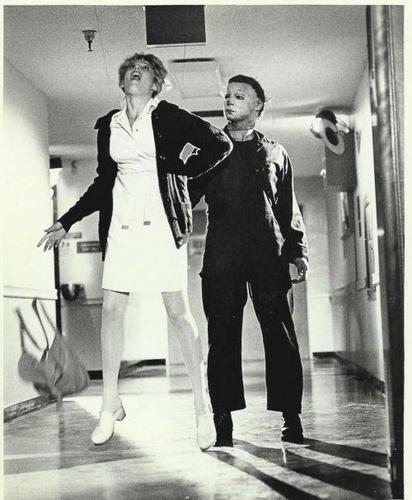 Then, he drops her. The whole sequence takes about fifteen seconds, but this is ages when compared alongside the hammer or the syringe kill, or any of the many deaths that occurs off-screen. The mask is also shot, so that Michael’s eyes are black and bottomless. As it should be!

I enjoyed the hot-tub scene, too; or rather, the kill at the end of it (ok, the lady had nice boobs). Mainly I liked how Budd is killed quietly in the background, with Michael slowly and deliberately emerging behind the nurse like a ninja. Rosenthal wisely has him step on a stool, too, as to hide his face. Then the nurse plays with his hands, while we scream at her for being so foolish. This harkened back to the ghost scene, in the original, and it felt believable, if slightly implausible. As a horror scene, it works, though, because it takes its time, without going on for too long. It loses points, however, because we can clearly see Michael’s eyes behind the mask, when the nurse looks up at him (also, he would have scalded his own hand, dunking her head into the boiling tub, but this emphasizes his own indestructibility mid-kill, which is kind of neat).

Also, I liked how Laurie blinded Michael towards the end, so he flailed his arms around himself like the blind, claw-wielding monsters from Resident Evil 4 (2004). The execution wasn’t the best, though—mainly because it went on for a bit too long. However, the explosion that engulfed Michael in flames afterward was pretty impressive—with some good stunt work from Laurie’s double and solid pyrotechnics to capture the (terrific) blast, itself. Maybe there were one too many cuts, but still: solid. Watching Michael emerge from the flames and fall to the ground looked great, especially since everything nowadays tends to look pretty fake, when fire is involved. Here, it looked like they actually lit the building on fire. My inner pyromaniac was appeased.

I also appreciated the same free-motion, point-of-view camerawork being used in Halloween II, even if it didn’t always deliver due to the movie’s muddled editing. In the original, it was used in the opening scene to establish the look, tone and premise to the movie; in the sequel, Michael... steals a bread knife? To this, there were a couple oddball moments. Again, a bread knife looks a lot less intimidating sticking out of a child’s school desk than the chef’s knife he used, in Halloween (eat your heart out, Norman Bates). Probably my favorite moment in the movie, though, (apart from Ben Tramer’s unfortunate demise) is when a deceased Annie’s eyes visibly move under their lids after her dad, the sheriff, closes them. All the same, Annie had her eyes open when she died, so points for continuity. At first, I wondered why the paramedics were bringing her out of the house, when the sheriff and his men showed up, given Annie was killed in the garage. Then, I remembered: Michael had placed her on the bed, upstairs, postmortem. 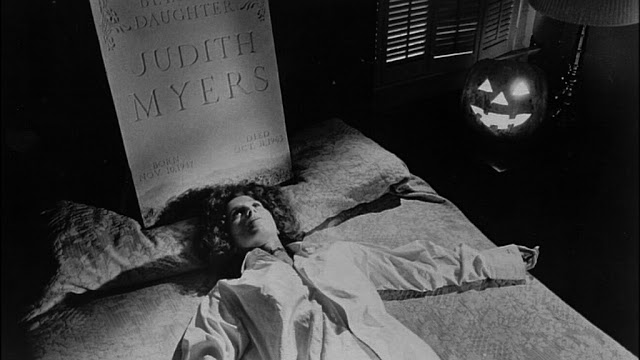 So, yeah, I had fun, watching Halloween II. Even if much of what made the original so good was missing here, there ultimately remained a feeling of continuity and progression. The world feels real, because characters communicate, as part of a town under attack; radios broadcast dangers, and people look at scenes of old crimes only to remember bygone times tainted by the perennial visit of evil. At the same time, some people fall asleep in their chairs watching old horror movies. They think themselves safe, only to turn a blind eye and pay the price.