Rachel has her arc, and Loomis has his. As for Loomis, he’s straightforward. Better yet, this time around, no one argues with him, for a change. What a treat! Generally the victims are people off-screen, but those he talks to “keep their mouths shut and their eyes open.” It keeps things plugging along but there’s a sense of continuity throughout. The new sheriff recognizes Loomis, and remembers Brackett even though the man has long since retired (and moved to St. Petersburg, of all places). Loomis tells the new boss what went down, at the fuel station, and his story seems to check out; or, at the very least, the new guy decides to go with his gut, the moment he realizes the lines are down. 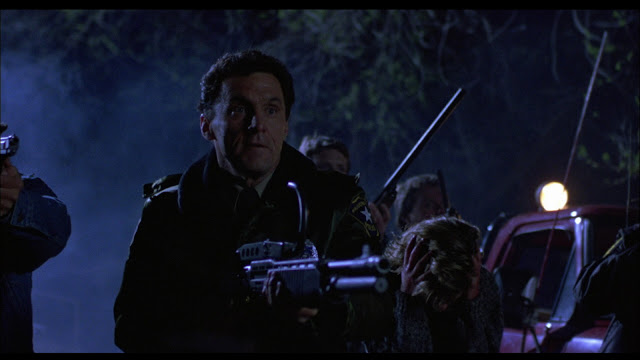 It’s so refreshing to see people working together! I simply can’t stand it when too much of a movie is wasted merely to have characters argue for the sake of it. Here, they (mostly) stick together and communicate (via radio). They watch TV and listen to bulletins. The place feels connected and aware. At the same time, there are a couple of slip-ups, but they make sense. The sheriff leaves his own house under siege, as does Loomis, despite the sheriff’s house being reinforced (with metal doors, Brady complains). So, yes, the sheriff leaves, but he has a town to protect (from itself: the rowdy drunks accidently shoot one of their own, to which one hilariously says to his partner, “You stupid bastard!”). On the other hand, Loomis is… well, Loomis; he has a grudge and the scars to remind him there's more at stake than a mere killer on the loose. Then again, Michael seems pretty invincible, so staying in a house one cannot get out of, with a maniac who can't be killed, can quickly turn into a deathtrap.

I digress. All in all, people refuse to take Michael seriously because they don’t know what they’re dealing with. Their reactions makes sense because Michael really is stronger and more dangerous than any of them could guess. The police station is trashed off-screen, and we have a chance to fathom his true potential merely by gazing at the wreckage. Also, it gave me chills, seeing Michael without his mask, in the diner (under it is another mask, and a blank one, like the Slender Man). When Loomis fires at him, he’s suddenly gone, lending Michael a supernatural air. Here, the scene is shot in broad daylight, but the effect works because it plays with our minds without resorting to tricks of the light, for a change.

I enjoyed his actions having lasting effects. When he kills the city worker, he throws him into the transformer. This knocks the power out all around town for the rest of the movie, but the sheriff happens to have a backup generator for his emergency radio. Continuity and resourceful side characters are always plus; many horror movies insult our intelligence by leaving them out, but Halloween IV deliberately leaves them in. There's welcome variety during the holdout sequence, too. Here, Michael takes his time. We see his tell-tale burned hand, in the back of the cruiser while he naps like Rip van Winkle.  “The deputy’s gotta be toast,” we think. However, we can’t confirm this because when the prowler arrives at the house, the driver’s face is masked in shadows. Then it’s the deputy who enters, alive and well. The movie toys with us; it takes its time, letting us feel like Michael is present by playing the classic music, or by showing him once and awhile (with audio cues) without having him actually attack. It’s not about the kill, but the hunt—a concept no other movie in the franchise gets consistently right but the original. 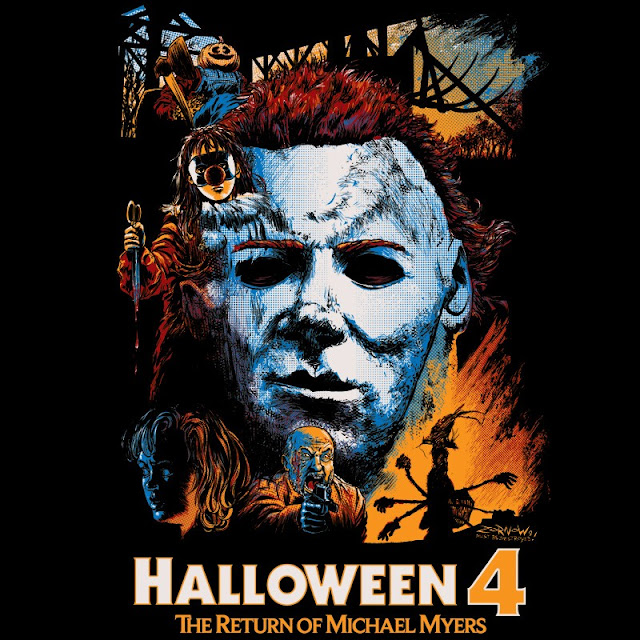 This movie also juggles a bit more, but doesn't feel crowded. It maintains the look, sound and feel of the original but adds to it, and tries new things without reinventing the wheel. Again I really liked how strong Michael was. The scene with truck, towards the end, is essentially a repeat of the first movie, except in motion and with more going on, in general. When the hand hits the window, it smashes through it and rips the guy’s throat out; Michael also rips Rachel’s shirt, reminding me of the T-800 ripping Sarah Conor’s sweater, in The Terminator (1984). To this, there’s quite a few comparisons to that movie and this one. Similar to Sarah, Rachel isn’t some a larger-than-life hero. When Jamie piggybacks on Rachel, the teenager isn't Ellen Ripley; she visibly struggles with the weight. She isn’t inexplicably strong or fast. She makes mistakes, like falling from the roof, or being blind enough to fall for a two-faced jerk like Brady. At the same time, she improvises with the fire-extinguisher, and manages to ram Michael off the road without totaling the truck. Before Brady dies, she tells him to come with them. Her head is screwed on right, but she’s not superhuman; like Laurie, but still different. That’s how a sequel should be.

There was also the loading-the-weapon-while-the-killer-slowly-advances trope, with Brady and Michael. Here, Michael takes his time, toying with the boy as he struggles to reload. However, the moment Brady loads his weapon, Michael speeds up, pulling the barrel aside. The same basic event happens in Near Dark (“Havin’ a li’l trouble with your hog-leg, there?”) and later, in T2 (1991) when Sarah faces the T-1000. There’s also a scene in Halloween 4 involving the hero throwing a guy armed with a knife off a moving car. Rachel doing so is similar to the escape from Pescadero when the T-1000 (a literal guy with knives for arms) is thrown clear, except Halloween 4 came first. Overall, Halloween 4 inhabits a good spot, feeling like a good 80s reboot like The Blob (1988), The Fly (1986) or Return of the Living Dead (1985). They all riff off each other, and so does Halloween 4. Everyone wins!

There wasn’t much to complain about, here. The premise is unrealistic, given how powerful the blast was in II (1981), but whatever. I chose to suspend my disbelief, which the movie made easy enough; it expertly glosses over the unimportant bits so we can get straight to the fun. Another odd moment was the slow-motion bit where Loomis dives into the garbage cans, which felt like something out of a John Woo movie. All the same, Pleasence dials back his performance this time around, and it’s satisfying to see him and Michael onscreen, together. There’s a subtle humor to him, hitchhiking and trying to be polite with the drunk priest (the man is tortured, not a loon). Him getting thrown through the glass window in the school also works, because it takes him out of action—not enough to kill, but it forces him to fall back. Meanwhile Jamie and Rachel go with the rednecks, out of town. Yeah, these guys are disposable, but in spite of this don’t feel out of place. Neither did the cops in The Terminator (“We got thirty cops in this building.”). They’re there to serve their role and then let the heroine take over when they're killed. It works.

I will say the bone-white mask leaves something to be desired, in spots, but plenty of shots dress it in shadows: 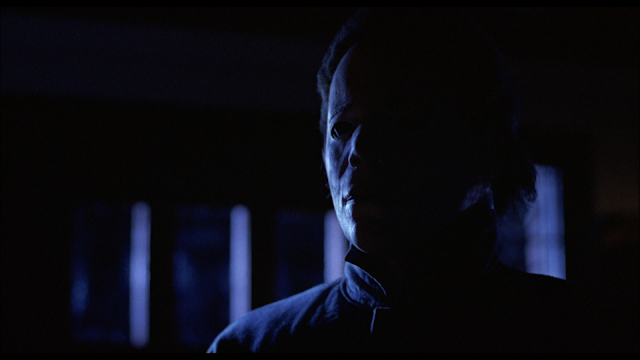 We never see Michael’s eyes, which helps keep him ambiguous. There’s added variety with the face bandages, too, and the scene where the group of Michaels surround Loomis and the sheriff. With the earlier dream sequence, and the mirage during the diner, we think maybe it’s Michael and he has magic powers. But then we see that it’s a group of boys capitalizing on the legend to spook the rattled lawman. Halloween 4 really loves to play with us. Even the mask scene at the end (done just like original: by placing a mask over the camera lens) is ambiguous: “Oh, no! Did Michael come back?” we ask ourselves. Then, we see Jamie standing in her clown costume, while Loomis screams (the sheriff actually has to stop him from shooting Jamie, but then everyone stares up the stairwell, aghast). Roll credits. 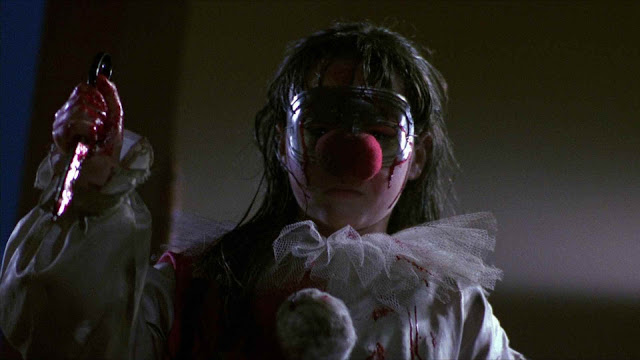 I loved this part. Curiously they opt out of using the classic theme, at the end, but the twist is still great, regardless. There’s a cycle at work here that feels inherited, and the subtitle “The Return of Michael Myers” is intentionally misleading in that the return of the evil is through Michael’s demise and Jamie’s emergence as the next in line. It was a great way to surprise audiences while at the same time opening up the franchise for sequels involving the killer in a new shape (and if the idea of a clown mask seems odd, keep in mind, it was the original mask Meyer’s was supposed to wear before they tried the Shatner mask). It's such a shame they didn't follow through, for the sequels; then again, neither did II.

I sat down to watch 4 with very low expectations. II was already a mixed bag for me, and trying to sit through VI (1995) in any shape or form was like pulling teeth. But 4 was different; unlike II, I found myself comparing it a lot less to the original. Instead, I just enjoyed it on its own merits, and it was overall a much better viewing experience than II was. I could find little to fault with it; even if it wasn’t new or original, it knew how to take what it had and give a horror junkie like me a good time. After watching it, I immediately wanted to sit down and watch it again.