June 09, 2018
Here is part two of a three-part essay I've written, analyzing the trailer of  Halloween (2018). In it, I investigate the Gothic themes present throughout the franchise, as invoked by the trailer. Read part one, here; part three, here. SPOILERS!

As previously discussed, the modest and close-knit feel to the creative process in the upcoming Halloween  has me feeling very excited, indeed. That being said, my optimistic feelings stem from more than its solid pedigree; the trailer itself is quite decent. I like it as much as I do because it manages to evoke the feelings of the original, without copying it, note-for-note. It appears to have taken some risks, but regardless looks very interesting from start to end. 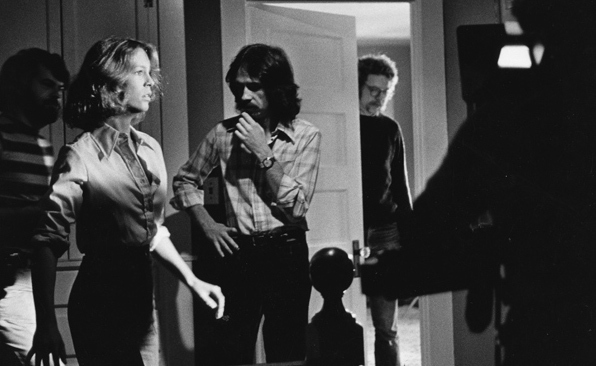 The biggest hurdle the movie faces is tradition. Michael Myers isn't dead; he's aged, and everyone knows his legend. The trailer even starts with two nosy investigators, hell-bent on exploring the ghost story everyone knows (one, in the trailer, smugly declares that he doesn't believe in ghosts). So, how does one effectively tell the same old-story without boring the audience to death? Simple, do what Carpenter did: Play around with the ideas until one reaches a good balance between old and new.

As soon as the trailer starts, we're at the prison, where Michael is housed. I'm not sure about the checkered floor of the courtyard, but at least it looks cool. Patients are chained to the ground like Prometheus to his rock, and clearly the investigators are the eagle come to feast. One of them taunts Michael with his old mask, almost eager to have him turn around. He doesn't, but simply stares ahead, contemplating Michael stuff.

One investigator explains the gist of their visit, in an overdub: to dig up the past, consequences be damned! I mean, the guy's locked up, right? There's no way he could ever escape, right? Alas, the trailer makes it clear that he can, and does. I especially loved the shot, of the mist in the high beams—coming from the station wagon, which halts to avoid running over the wandering mental patients spreading out from the tipped bus. Likewise, the gore is slightly updated, but not so much so that it feels wholly alien to the franchise. Make no mistake, this isn't torture porn (not even the bit with the teeth, to be honest; it pushes the envelope but doesn't burst it). The focus here seems to be largely on atmosphere.

Even more ambitious is how Green and company have decided to ignore every film in the franchise except the first, which theirs is a sequel to. Pretty bold, but that's what I like about it. In essence, they're overriding canon to substitute their own palimpsest—to reinvent the narrative from the offset. Gothic stories love "ancient relics" presented as genuine, when, in fact, they're totally bogus. Their power stems from myth, which horror movies explore with gusto. Think of Halloween, the holiday: There's fakeries everywhere—fake ghosts, monsters, and scenery—all intended to chase away people's actual fears. Clearly a little reinvention is par for the course.

In Green's version of events, Michael is explained as having survived. This includes Sam Loomis' salvo of thirty-eight caliber bullets, and the subsequent fall off the roof; as well as being stabbed in the neck, eye, and chest by Laurie Strode. Not only this, but he's aged by forty years. In other words, he was six, in 1963, when he killed his sister. Fifteen years later, he escapes Smith's Grove Sanitarium and returns to Haddonfield, to a) revisit the scene of the crime and b) commit further acts of violence on the sexually-forward youth of the small, fictional town. At this point, he would have been twenty-one. Add another forty and this makes Michael sixty-one, in Green's Halloween.

I'm not entirely against this. For example Mel Gibson is sixty-two, but you need only watch Blood Father (2016) to realize the man could still kick your teeth in. As far as Michael is concerned, the aged mask also has the benefit of looking pretty damn horrid, on top of being uncanny (no doubt to William Shatner's perpetual delight, or chagrin—I'm still not sure which). Seeing as Michael was injured when he was young, and attacked by two individuals—a young woman and an old man, neither with combat training—it at least seems plausible that he could recover from so many injuries uncrippled (Caesar died from twenty-three stab wounds; maybe he would have survived twenty-two). This is, of course, operating under the assumption that Michael's actually human, in the movie. As far as I can tell, the trailer seems to be presenting him as such. Locked up, he's described as a man of flesh and blood, and if he bleeds, they can kill him, right? Laurie's not so sure, the trailer eventually shows us. To her, Michael isn't a man, but a ghost (more on that, in a moment).

I also really enjoyed when the investigator describes Michael's past crimes, including how he was shot by his therapist. The good Doctor Loomis is depicted in a crime-sketch illustration as part of a massive portfolio. Said folder includes photos taken directly from evidence and the crime scenes, themselves. Such a hefty dossier reminded me of the investigators who spent hours grilling Sarah Connor at Pescadero State Hospital, in T2: Judgement Day (1991). During that scene, one could see the photos taken from a surveillance camera, at the police station, in 1984. Of course, those were, in a very Gothic sense, forgeries; the photos were never taken, during the original production, and Cameron and his team had to recreate them, for the sequel. The same business is going on in Halloween, with the sketches and crime scene photos. Essentially the myth of Michael Myers is being reinvented by the very auteur that coined it, with some outside help.

Like the investigators from T2, we seem to be dealing with men who are well-versed in the original misdeeds of a great crime, and its perpetrator. Also like those men, these investigators seem to think the attacker human—not a ghost nor a terminator. Just a man. Even the original did that, showing Nick Castle in brief flashes as he stole the station wagon and, later, drove not-so-surreptitiously through Haddonfield. At the same time, Loomis constantly described Michael as "pure evil" or simply "the evil": "This isn't a man ... He had the blackest eyes—the devil's eyes."

Initially I wondered if such a foil would present itself, in Green's version—as to lend the murderous spree with an air of the bloody supernatural. Laurie has taken up that mantle, honoring the man who saved her life by resuming his incomplete quest. In doing so, the town appears to have written her off, including her own granddaughter. But in the trailer, she is revealed to be waiting with superhuman patience. Armed for bear, this modern-day Annie Oakley has an ax to grind. Furthermore, her home is rigged with traps and hidden passageways. Her scars are as plain as a sailor's tattoos; she ain't the ol' girl scout, no more. Apparently converted by its owner into a Gothic castle, we have a residence the likes of which puts the original's to shame. That derelict was just a house; this is a fortress, and it's occupied by a tough-as-nails, no-nonsense grandmother who knows how to shoot. It's not exactly Strawberry Hill, but all the same, we have a woman who's spent her entire life converting her home into a castle, while, at the same time, diligently waiting for the past to return. Horace Walpole would be proud.

Remember the constant build-up in Peter Hyams' Outland (1981)? In that movie, Sean Connery had to wait for two assassins to arrive, for a good portion of the movie. There was even a countdown timer, and I loved every minute of it. Likewise, the Shape in the original Halloween (1978) proceeded steadily towards his destination, equally determined, utterly implacable. I loved that, too. I hope Green's sense of pacing is equally effective.

I especially enjoy how confident and sure-footed Laurie is, in the trailer. In a sense, she's become what Loomis once was: the caretaker of a great evil that no one else takes seriously (if the investigators did, they wouldn't be dangling that mask in front of him so stupidly). She's been waiting her entire life for him to return, sensing their reunion as though it were Fate itself, coming home to roost. In the original Halloween, there's a wonderful scene where the disembodied voice of the teacher asks Laurie to explain the writings of the fictional writers Costaine and Samuels. After Laurie responds, the teacher replies, "That's right. Samuels definitely personified fate. In Samuels' writing, fate is immovable, like a mountain. It stands, where man passes away."

Being fully aware of this, Grandma Laurie no longer seems to view Michael as a man; she calls him by his name, but treats him like the Shape, as Fate personified. If this is the case, then Green's version gets something right that none of the sequels managed to: atmosphere. 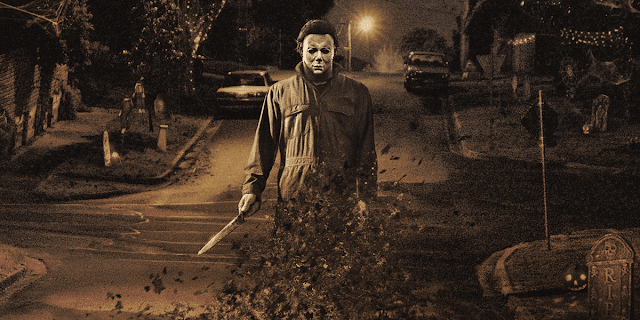