Room for Both: Horror and Social Commentary in 3 Japanese Classics, Part 1

This article is part one of a three-part cross examination of three mid-20th century Japanese movies that my partner and I have watched, together, over the past four months: Hiroshi Teshigahara’s Woman in the Dunes (1964), Toshio Matsumoto’s Funeral Parade of Roses (1969) and Kazuo Hara’s Extreme Private Eros: Love Song (1974). Part one will examine the plots and technical delivery of each movie.

None of these movies are related, apart from that. What’s curious is that each ends up feeling like a horror film, to me—in spite of it being inadvisable: the act of classifying them as “horror” in a purist sense. All the same, while watching them, I couldn’t shake the feeling of watching very different movies than whatever I had initially expected.

Teshigahara’s movie, Woman in the Dunes, is about an entomologist—tricked by some rather unscrupulous villagers into being lowered down a hole, out in the desert. The hole is surrounded by sand dunes that must be shoveled on a daily basis, lest they grow unstable and threaten the village resting on top of them. Meanwhile, the hole contains a hut, which will be destroyed first, unless the dunes are dealt with. A woman lives in this hut and she shovels sand. Like Sisyphus, she is resigned to her dull, inescapable task.

What a strange system, I thought. Why not use more practical methods? The answer is simple: Slaves are a readily-available, cheap alternative (one theory as to why the Romans never developed past a certain technological state is because they didn’t need to: they had all the slaves they could ever require; the same warped logic is applied by the villagers). In any case, the man falls in love with the woman, who becomes pregnant and is evacuated, while he remains. When, at last, he has a chance to escape, he chooses not to. He has acclimated to his new prison.

At the end, I was left feeling as though I’d just watched a lengthy Twilight Zone (1959-64) episode. This was not my feeling going in. The best horror often leads off this way. It establishes a false sense of security and then disillusions it; said reveal can be sudden, or gradual. Dunes was a bit of both—the shock at the start, and the gradual acceptance of one’s inescapable doom.

In Funeral Parade of Roses, we are presented with something altogether different: a “queen,” or man who dresses and acts a woman, including sleeping with men—in 1960s Japan. This seemed largely to involve performances—makeup, body language, upspeak—rather than surgical procedures. Needless to say these persons aren’t always accepted: they skirmish with surly women, whilst their own male lovers uselessly fawn over them from a distance.

Wanting to be different, the protagonist, Peter, walks around, troubled, not simply because he is a queen, but how he became one. Towards the end of the movie, his past is shown, with his mother scolding him fiercely for wearing makeup like a girl. The son explodes, killing his mother—along with an unfamiliar man whilst the two adults are about to have sex. It’s a very violent ordeal, brought to life with terrific blood effects. Peter’s tendency to explode builds, eventually leading him to gouge out his own eyes, like Sophocles’ Oedipus. The gore, here, is equally fabulous, using makeup and prosthetics to rival the sort of digital visual effects showcased in much newer movies.

Being shot in black-and-white, Roses reminded me of a much bloodier version of Alfred Hitchcock’s Psycho (1960). In that movie, Hitchcock used chocolate syrup for its famous kill. I’m pretty sure Matsumoto didn’t, with his actors. Blood is hard to get right (while far from the greatest movie ever filmed, Brian O'Malley’s Let Us Prey [2014] at least manages to). In particular, fake blood in older movies generally looks pretty shoddy. For example, in William Friedkin’s The French Connection (1971) it looked way too thick, like ketchup; then again, in newer movies, like Tarantino's latter-day output Django Unchained (2013) or The Hateful Eight (2015) the blood looks oddly like paint (this is a stylistic choice, not a technical limitation, however). Whatever the reason or method, Matsumoto’s blood looks fabulous; his characters wear white, and their pure clothes are coated in black blood that stains, runs and ruins. Maybe blood, like cigarette smoke, simply looks more striking in black-and-white. Then again, maybe not: many horror movies look excellent in color. I certainly can’t imagine Fred M. Wilcox’s Forbidden Planet (1956) in black-and-white: when purple, those blaster shots simply leap off the screen at you. At the same time, they were displayed as black-and-white in John Carpenter’s Halloween (1978): in that movie, a little girl stares at Forbidden Planet, featured curiously on her family’s old, black-and-white television set. Such sets were common, in the 1950s, when the movie was new (seeing it in color would have been a privilege exclusive to the theater). I’m not sure if they were, in the late 1970s, but I remember my brother owning one as a collector’s item, in the 1990s. Apart from colorful visual effects seen in Forbidden Planet, the Technicolor showcase The Wizard of Oz (1939) initially bombed. It didn’t pick up steam—not until broadcast on family TV sets, in the 1950s (the irony being that many of these sets would have been black-and-white).

The fact remains, Dunes and Roses both felt perfect to me, as black-and-white movies. So does the third movie, Love Song. Shot by Kazuo Hara, its premise is explained from the offset: Hara, unable to cope with the loss of the girlfriend who left him, shoots her (with a camera). He does this with her permission, while she and her partner(s) are in the room. To quote Tom Hanks, from Joe Dante’s The ‘Burbs (1989): “I’ve never seen that; I’ve never seen someone drag their garbage down to the middle of the street and then bang the hell out of it with a stick.” Despite having seen hundreds of films, across genres, I’ve never seen what Hara does with Miyuki. 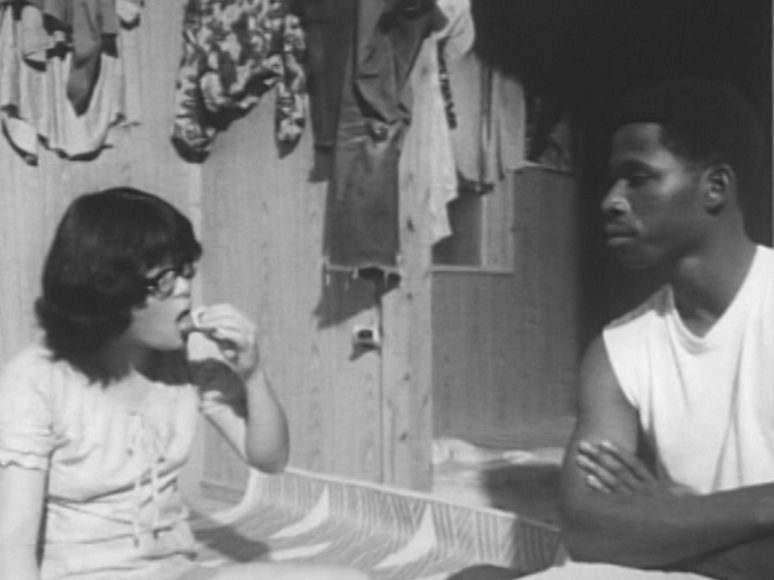 That being said, I’ll be the first to admit that the premise of unwanted separation can be used to great comedic effect. Just watch Nicholas Stoller’s Forgetting Sarah Marshall (2008) or David Wain’s Role Models (2008): the guy who can’t let go is either a hilarious or a sympathetic wreck. And yet, while I’ve heard an ex stalking a former girlfriend, including by filming them, I’ve never in all my days heard of someone seriously being allowed to do so by their old partner—to act as a silent observer in midst of all her future shenanigans. Who’d want to film that?

I figured, Hara must be a glutton for punishment—that or the whole affair had to be royally trashy. Instead, I found it fascinating and insightful. This is because whole the invasive process required Hara to have been in the same room with Miyuki and her lovers (an immediacy assisted by the analogue approach); we’re privy to it all, seeing how his unwelcome presence exhibits a toll on everyone, including him. It’s a unique perspective, to say the very least.

Miyuki’s also a piece of work. She boldly “experiments,” trying relationships with other women, and black men with “big black cocks” (which she writes, in pamphlets she wrote and printed herself, before trying to administer them amongst angry men, in Okinawa). She hotly encourages women to simply take a man’s money and run. I don’t think the 1970s would have allowed for anything other than radicalism, given how stringent expectations on female behavior were, in Japan or abroad (the Okinawans tore up Miyuki’s pamphlets and attacked Hara).

If I’m being honest, my gut reaction was that everyone in the movie was ridiculous. However, then I paused and wondered to myself, what’s so outrageous about birth or parenthood? These are very ordinary things. Miyuki simply didn’t want to be a stay-at-home mom, didn’t want to have to be stuck with a man she didn’t love (simply due to him being Japanese). Sure, it sucks to be him; then again, given the way Miyuki was acting would he have been happy with her as she was? Or should he have put her in her place?

The movie, to its merit, raises awareness towards a lot issues like these—ones that would otherwise simply go unaddressed, even nowadays. I shall explore Love Song in further detail, in part two.
***
About me: My name is Nick van der Waard and I'm a Gothic ludologist. I primarily write reviews, Gothic analyses, and interviews. Because my main body of work is relatively vast, I've compiled it into a single compendium where I not only list my favorite works, I also summarize them. Check it out, here!
I'm an artist and a writer. If you're interested my work and are curious about illustrated or written commissions, please refer to my website for more information. If you want to contact me about a guest article, please use this contact form or reach out to me on Discord (vanderWaardart#5394)!