May 26, 2018
Here, in part three of my review for Cobra Kai (2018), I examine the show's conclusion, sexual content, and larger themes. Part one outlined my concerns going in, and the questions I want to address throughout the entire review. Part two addressed the show's large cast (and the diverse, complex interactions between them). Spoilers!

Everything in the show leads up to the tournament, featured in the climactic final episode. I loved this episode; apart from the impressive martial arts, it wonderfully illustrates the show's themes of finding balance in perpetual, flawed tutelage. It opens with the crane kick, throwing it out the window to make room for other tricks. There's a few other winks and nods (such as Daniel clapping his hands together to the boom of dramatic music, before shouting "Medic!"). And then things proceed in Karate Kid fashion, through battle. What's different this time around is the roster has increased, in size. In the original, it was Daniel versus Johnny and the Cobras. Now we care about people on both sides of the conflict. Each has has a stake in a larger conflict, coming to a head. 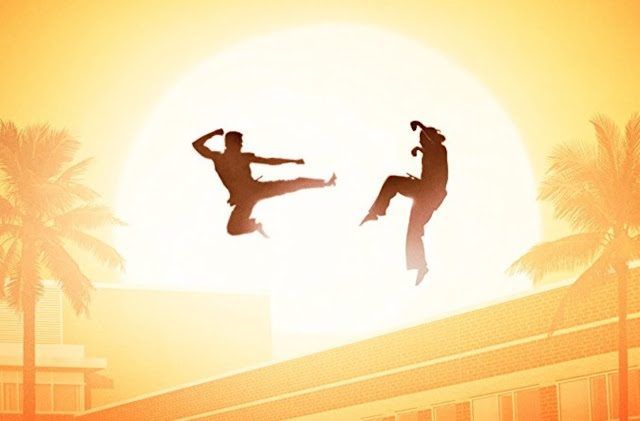 For instance, Miguel's mother is worried about her son. Her own mother is less worried. Partly it's because she's stoned (much of the show's earthly humor comes from her). However, she's also calm because she knows that whatever happens, her grandson will learn from this experience. And yet this is partly what worries Miguel's mother. Here, we come full circle and the show returns to the old adage: "There are no bad students, only bad teachers" (even when Louie seeks revenge on Johnny he says, "I'll take my licks like a man," suggesting someone taught him to think like this).

What's tragic here is Miguel is an excellent student, arguably better than Daniel was at his age (in the immediate sense that he learns quickly and well, and fights back against his bullies). The tragedy is compounded in that Johnny realizes his own failure—not as a teacher, but in his ability to teach his student the requisite lessons to help him find balance and happiness in his life. In the end, Miguel wins the tournament, a brief and fleeting event. At the same time, he distances himself from Sam, a potential life partner. All that glitters is not gold, it would seem. This is because the tournament isn't simply something to win, in the moment. Things are never finished, and finding balance in and out of combat is the ultimate takeaway from all this comedy and drama.

I especially enjoyed the fact that the show extends its morals to more than the main characters. Aisha loses, and retreats in anger and shame, very much a poor sport. Yet, when she does, we sympathize—partly a) because she's been treated like garbage throughout the entire show, and this tournament must have felt like her one shot at redemption; and b) because she's been internalized Johnny's rules of "no pain, no fear, no mercy." She's not simply afraid of defeat, or a lack of closure, but of disappointing her teacher. At the same time, she wants revenge, and better treatment from those who wronged her. In the end, she looses the tournament, but rekindles her friendship with Sam. Like everyone, her struggle to find balance is never-ending. It felt believable.

The show keeps its head in the present, managing to feel relevant, despite being concerned with the past. Stuck in the past, Johnny's alienation in 2018 shows how much times have changed. Or have they? One, Cobra Kai is very sexual, in its dialogue, when compared to the original Karate Kid (1984). In that movie, Daniel and Ali's relationship was kind of innocent—cute, but tame in what's actually said. Miguel and Sam convey an awkwardness about them, but throughout the show is an open discussion of sex that is much more front and center. This includes Johnny spray-painting a giant dick next to Daniel's face on a dealership billboard (I'm laughing as I type this).

Watching all of this unfold, I noticed something curious: You could play drinking game, wherein one takes a drink every time "dick" is uttered, and wind up drunk, before long. Yet, the one time the female genitalia is mentioned, the (female) interlocutors laugh awkwardly as one of them sheepishly mutters, "Vagina?" (anytime the word "pussy" is used, it is by men, at other men). I found myself thinking of Michel Foucault's The History of Sexuality (1978) and the numerous ways sex is talked about, without saying much of anything concerning the act, itself.

Overall, I felt the sexual humor was handled well, feeling like part of the scene without going off the rails. At the same time, it felt largely heterosexual (nary a gay person in sight) and largely phallic, for various reasons. It evoked another Macchio vehicle, Crossroads (1986), where the old man, Willie Brown, says to the crooked, black sheriff: "The more times change, the more they stay the same." That movie was commenting on racism and crooked cops; Cobra Kai seemed to treat the idea of homosexuality (at least in regards to fear or ridicule of the penis) very much how a movie or show would have, thirty-five years ago: with ridicule. 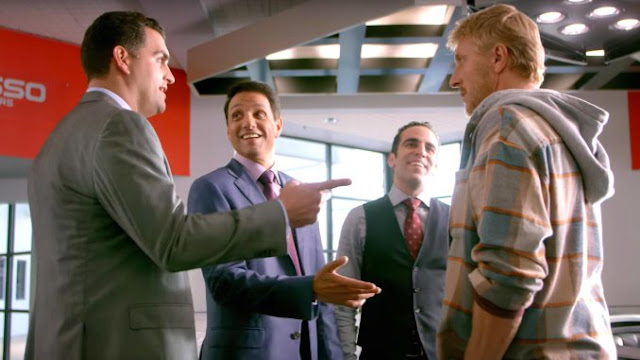 Then again, it's important to remember that the humor in these moments largely arose from the agitated characters' misconceptions. To this, Johnny wasn't the only one living in the past, as nothing in the show seemed to incense Daniel (or delight his male rivals) more than the thought of a giant dick spray-painted next to his mouth (to the show's credit, the wife wasn't nearly as bothered by the idea).

Much of the charm in Cobra Kai lies in its interactions between the young and old. It demands we enjoy the older characters precisely because they're dated, raises such pertinent questions as, is it possible to for kids in 2018 to like Ratt or Guns N' Roses? Miguel's bonding with Johnny allows the show to answer these kinds of oddball queries. In doing so, it provides a lot of fun, early on. For example, a largely clueless Johnny walks around, handing out flyers, spouting out hilarious lines like "You're never too old to learn how to kick ass!" It doesn't pan out, too well, so Miguel designs a website for him. Johnny stares at the computer as though it were magic, and Miguel, a wizard (remember Clarke's third law: "Any sufficiently advanced technology is indistinguishable from magic"). Seeing the tables turned was brief, but great fun.

This clever blend of old-meets-new helps move the narrative along and supplies a lot of essential humor. Largely about children bonding with adults and their old, mysterious ways, these ways needn't be ancient arts like karate, but newer-albeit-just-as-mysterious ones, like 1980s heavy metal. The blade cuts both ways, though, and Johnny is just as stumped by the internet, Facebook, and gender studies; Daniel is perplexed by his daughter's emotional outbursts and moments of teenage rebellion. When these potentially alienating elements come into contact, they're inevitably going to clash. They always will, too, because kids constantly seek role models and teachers, and old people eventually  become lonely and need someone to pass their knowledge onto. We're constantly left with old dogs, stuck in their ways, and kids who don't know any better.

This is central to the show's larger, more tragic arc. Johnny determines using karate will get you babes (not dudes), and likewise thinks rock 'n roll is a surefire ticket to success. Yet, as time goes on, we learn that he's actually projecting his own survival mechanisms onto the next generation. For example, a flashback reveals a younger Johnny using music and martial arts to escape his own incomplete home, where his stepfather could only offer him money and nothing else. In a sad twist of fate, Kreese ended up becoming Johnny's father figure, giving him the attention he craved by becoming the teacher he looked up to. However, Kreese could never teach him the lessons he would need to find balance. So, at the end of the show when Kreese returns, Johnny looks on his former teacher in horror. 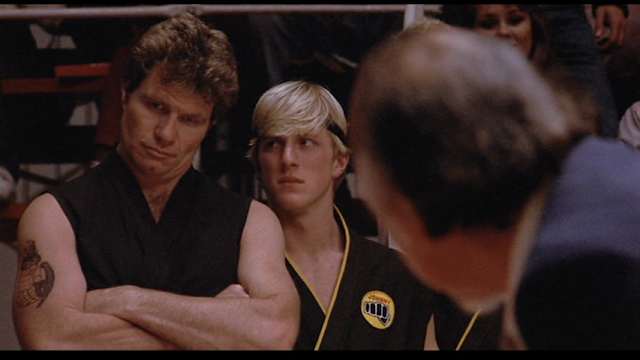 In this way, I think Cobra Kai engages with the dark side of fathers, teachers, sons and students in a way the original only flirted with ("Sweep the leg"). As a show, it manages to get everything about the original right, while spreading its lessons to a new generation. Its cast, of players both old and new, is massive, varied, sympathetic, and complex. As a fan of the original movie, I loved every single second of Cobra Kai.

Bring on season two!
***
About me: My name is Nick van der Waard and I'm a Gothic ludologist. I primarily write reviews, Gothic analyses, and interviews. Because my main body of work is relatively vast, I've compiled it into a single compendium where I not only list my favorite works, I also summarize them. Check it out, here!
I'm an artist and a writer. If you're interested my work and are curious about illustrated or written commissions, please refer to my website for more information. If you want to contact me about a guest article, please use this contact form or reach out to me on Discord (vanderWaardart#5394)!