May 26, 2018
So begins my review of Cobra Kai (2018). Here, in part one, I outline my concerns going in, and the questions I want to address, throughout the review. Part two shall address the show's large cast (and the diverse, complex interactions between them); part three, its conclusion, sexual content, and larger themes. Spoilers!

The Karate Kid (1984) is one of my favorite movies. Ever. So when I heard there was going to be a flagship miniseries on the relatively untested YouTube Red, I was more than a little dubious; the show was thirty-five years later, for starters. Yet, for all intents and purposes, it seemed to be living through the eyes of a man stuck in the 1980s. I don't for a second question the fact that certain people, myself included, live in a certain "time," one that stands still for us, and probably never quite existed anywhere except in our heads. But in the case of Cobra Kai, I sincerely hoped the show at more to offer than that. 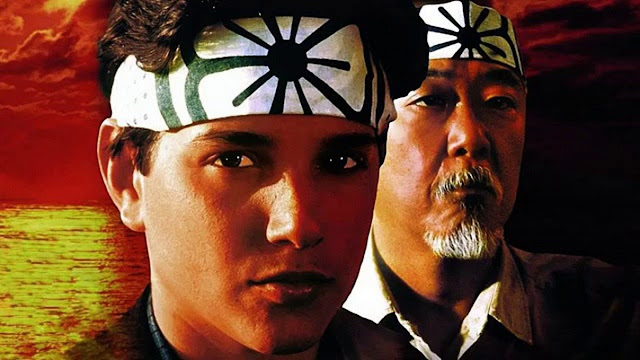 Thirty-five years have passed; what's happened to these characters, in the meantime? I'm all for nostalgia, but when a show or movie only reintroduces a character to look back on better times and nothing else, I get impatient. Take The Force Awakens (2016). I enjoyed the movie for what it was (essentially A New Hope [1977] rehash) but the reintroduction of aging characters didn't seem to do anything other than say to the audience, "Hey, remember these characters and what they did, forty-odd years ago?" Han and Leia have aged, and when onscreen together they look back on older times.

I was reminded of Jesus Christ suddenly aging from a boy to a man in his thirties; everything in between is just a mystery or left to the imagination. This isn't a problem if the characters are onscreen long enough to feel like part of the story by meaningfully interacting with newer characters. Take Mr. Miyagi, for instance: He appears onscreen, out of the blue. When we first see him, we know almost nothing about him; he's aged, of few words. As the film progresses, he becomes part of the story in the present, is with Daniel until the end. We learn about his past, but the focus is always on how he relates to Daniel, in the present. As an audience, we don't have to know anything about him for the story to work. Instead, we gradually learn about him as their friendship grows and develops.

The Force Awakens crystallizes Han and Leia. There's almost nothing new we learn about them—what's happened in their lives, apart from the fact that they once had a son. Each character stands around, frozen in time. They don't really bond with anyone onscreen in new meaningful ways. Instead, as ghosts, they merely look backwards. All we can remember from those days are what we've seen from the original films! So when they reference an event from after those movies, there's no flashback to fill the void in our heads; we're left with a couple of lines of rueful dialogue that reminisce on bygone events, which, for us, never happened. When Han dies, it feels like a wasted opportunity—to have actually gotten to know him better as a character—because his interactions with newcomers are terse and brief. It's fair to say that Ben Kenobi, in A New Hope, died in similar fashion, but at least he lived on as an actual ghost. Han isn't a Jedi; when he's dead, he's gone for good. 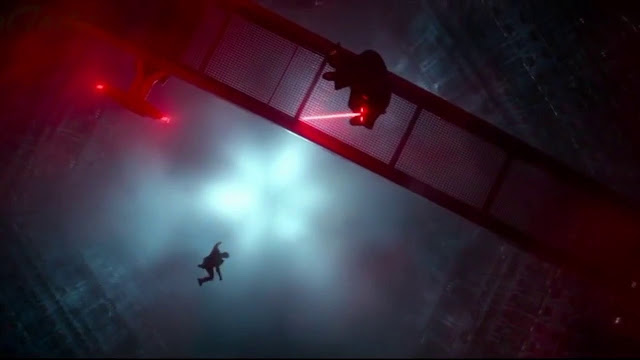 In Cobra Kai, I knew the show had its work cut out for it. A lot of it. One, it had to given us more with Johnny (and the rest of the original cast) than a mere caricature frozen in time. Two, it had to give us fresh blood—new characters we could care about, interacting with the old-timers. In other words, if Johnny was the show's Mr. Miyagi, then who was its Daniel? Every teacher needs a student, after all. This includes all of the side characters (too many to list, here) whose roles would have to be replaced with new talent. Three, while adhering to the blueprint of the original movie, the show would still have to be its own thing.

This presents a lot of problems. Filling its forebear's massive shoes would help Cobra Kai feel like a Karate Kid entry and yet it would still have to belong in the here and now. 2018 is not 1984, so how would the show bridge the gap? How would it addresses the differences in these times without making the older generation seem totally alien or unlikable? How would it be nostalgic without coming across as lacking the meaningful interactions between teacher and student that made the original movie so great, to begin with? How would it avoid being predictable? Would the basic formula still work if one turned it on its head, or played around with it?

Luckily the show succeeds in all areas mentioned, avoiding numerous pitfalls while, at the same time, introducing lots of new characters, twists and revelations that, together, make the show feel like its own tale in a larger saga. The key in doing so is finding one's balance. This is precisely what the show does, in spades.

In Cobra Kai, William Zabka reprises his role as Johnny Lawrence; so does Ralph Macchio as Daniel, and a few others (not Elizabeth Shue, who only reappears in stock footage from the original film). Thirty-five years have passed and Johnny is still driving the same car around Reseda he did, in high school: a Pontiac Firebird. Except in high school, the car was shiny and new (and had girls in it); now it's a rust bucket, carrying Johnny from point A to point B, with only his memories to keep him company ("That car had a lot of memories," he later tells Daniel, after the car is wrecked by Daniel's dim-witted cousin).

When the show starts, Johnny almost seems trapped, reminiscing better times as a transient drunk while occasionally finding part-time employment as a fix-it man. He's not exactly Mr. Miyagi, but lo and behold, Miguel still looks up to him. Whereas Johnny is largely unemployed and single, Daniel is happily married, with a family of his own. He also owns a car lot, and competes in the L.A. area with other top businessmen. So clearly things aren't so simple as a high school rivalry, anymore. These two men have aged.

Cobra Kai is largely a tale of two fathers, both figurative and literal. Johnny has Miguel (and later, other students); Daniel has his own biological children, but later earns the trust of Johnny's absentee son, Robby. What's great about the show is how it keeps the viewer on their toes. With virtually everything onscreen, there's more to these characters and situations than meets the eye. When Johnny "saves" Miguel, we're given an image of a man down on his luck, who isn't really interested in helping anyone. He's the underdog, and by extension, so is his student. As things progress, we gradually learn that he, as the show's initial, aging underdog, might actually be rabid—worse, that he'll pass this disease onto his surrogate pup. 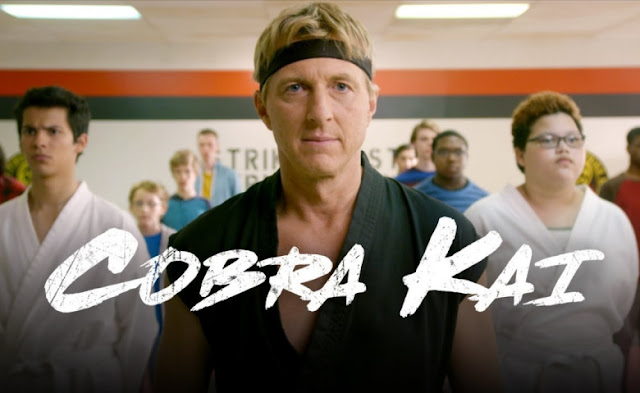 What's genius is that none of this is clear, from the offset. Jon Hurwitz and company certainly don't groom Johnny to be Miyagi. They treat him as we might expect (the guy swears nonstop, tears people down, and is comically aloof to how utterly sexist and anachronistic he is). Try as he might, he can't seem to escape the past. When it happens, it seems funny—oh, believe me is it ever—but eventually his behavior seems more and more tragic to us. Initially Johnny is presented as our hero; we're given multiple chances to like him before the show ultimately makes us doubt ourselves. The success, here, is that when we realize our mistake, we still sympathize with him, legitimately care about him in spite of his flaws.

Continue on to part two, here.