In act two of the movie, Lena and company find the fossil and the videotape. These are all dead, passive clues. Apart from the angry crocodile Lena kills, early on, they haven’t met anything living in the Shimmer except plants (ostensibly none of them are toxic). This all changes with the bear. In another movie, it would have been the star attraction. Here, it’s just another entry in a long list of weird events, all of them spectacular. 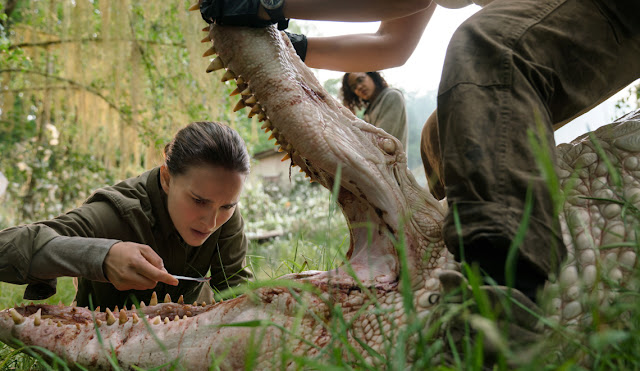 Make no mistake, Garland’s film is very much a creature feature, but a good one. It deliberately teases out the beasts, rather than dropping them in front of us. The sneak attacks occur on-screen, but pull the women out of frame—are heralded and followed by ominous sounds. The execution is spot-on. Yes, the creatures are mostly digital, but a lot of effort went into animating them, and providing their awful bodies with abundant, hideous detail. In any case, if not the creepiest scene, in the movie, the bear scene is certainly the most violent (the fact that something a brutal and nasty as a bear attack could be creepy at all is a testament to Garland’s horror know-how).

One of the women, Cass, has already been killed—dragged into the forest by the bear during an earlier attack. Lena finds the corpse, later, but is the only one to see it. Anya, the hothead of the group, suspects her of murdering Cass and responds by bushwhacking Lena in the middle of the night. Dazed, Lena recovers. She wakes up alongside Josie and Ventress. All three are gagged and bound, tied to chairs. The room is dark, lit by a single, stark lamp lying crooked on the floor. Anya rants and raves. The Shimmer changes everyone inside it and she knowing this. There's no obvious root to her psychosis, beyond this. Based on what Garland revels about her as a person, her violence arguably from a sexual attraction exhibited towards the dearly departed Cass (Garland makes it very clear that Anya is a lesbian). It’s essentially a retelling of MacCready’s interrogation scene from The Thing (1982) with a sexual angle thrown in, for good measure.

The conversation is very one-sided. All the women can do, it seems, is wait until Anya does them in. Then, Cass calls out. An elated, excitable Anya runs to investigate. She rounds the corner and disappears. Outside of the room, we hear a bestial yawp. Anya cries out and is silent. The camera watches and waits. We see an empty space past the arch leading into the hall; it remains empty. A lamp behind the dividing wall throws a glow onto the wallpaper in front of us. Gradually a long shadow drags across the makeshift spotlight. Then, the beast itself enters the frame. 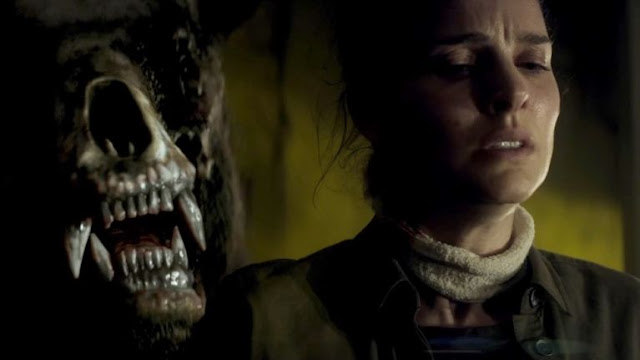 Here, we have what I call “dressed digital.” Garland’s director of photography clearly has a soft spot for David Fincher or Ridley Scott. Everything is thrown into perpetual relief, viewed through a gloam that enhances rather than obscures. In other words, the digital visual effects of the bear are “dressed” in shadows. The bear is “wrong”: its face is in tatters, rotted and peeled back to expose a misshapen skull; and when it opens its mouth, Cass’ stolen voice echoes from inside—distant-sounding and imperfect, like a gramophone. Another nod to Lovecraft, this time from At the Mountains of Madness (1936). In that novel, the shape-shifting shoggoth mimicked its prey’s voices, luring them through a maze before killing them, inside. It’s essentially a hunting mechanism, one established through mimicry.

In any case, a great deal of time is spent waiting for the bear to figuratively explode. Being a wild, deadly beast, we know what it’s capable of, which makes it all the more unnerving when it’s standing next to us, doing very little. Think the "pet" tiger, from Forbidden Planet (1956); the effect is very much like waiting for a bomb to explode. Eventually it does. Anya reemerges, injured, and proceeds to awkwardly discharge her rifle in the bear's direction. Most of the shots miss by a mile. The bear is not so inaccurate, and responds like a bear normally would: by tearing its attacker's face off (a demise most-deserving of entering the “coolest movie death” Pantheon, for sure). Before it can kill Lena and the others, though, Josie empties a full clip into the side of its head, blowing out its brains.

Following the attack, Josie gives up, turning into a human garden sculpture, echoing the Greek heroines of old; Ventress continues to the lighthouse, and Lena follows. The landscape is suitably weird, almost picturesque—flat but ornamental: crystal trees decorate the coastal surroundings, as if placed there by the unseen hand of a great and powerful Artist. I found myself thinking of the Southern Oracle, from Wolfgang Petersen’s The Neverending Story (1984): everything is bare, with a single, towering artifact waiting for the sole, questing hero.

The paintery details persist, here. The pharos itself is normal on one side and scarred up on the other, with a covering of a strange, white ivy that nearly reaches the top. Out front, someone has cultivated a garden of bones: first a row of limbs; then skulls; and finally ribs, spines, and pelvises with the tailbones pointing upward, towards the heavens. I found myself thinking of the pyramid of skulls, found by the Legion, when trapped inside the Tain, in Myth: the Fallen Lords (1997). In both cases, the bones were human, but arguable placed there by something that never was. Still, I love how Lena ignores all this and proceeds inside, clutching her assault rifle like Ellen Ripley. Inside, the sparse set mirrors the “fossil” in the pool; living tissue stabs into the stone walls, stretching over them like lichen. A charred corpse sits under the stairwell, with a camera pointing at it; a hole in the wall lies adjacent, surrounded by a kind of white moss. It’s almost vaginal, in nature, echoing the sexual imagery in Ridley Scott’s Alien (1979). Lena ignores the hole in favor of the corpse and camera. She watches the footage...

The video is heavily fragmented, starting with the same painterly landscape Lena braved. Then, it jump-cuts to the crystal trees and bone garden; then, inside the pharos, pointing at the black hole (using a dolly shot much in the same style as Ridley Scott). Showing it, the camera jump-cuts to a scene inside a black chamber looking out, over Kane’s shoulder. Someone is holding the camera, here, but it isn’t Kane. Next, we see a strange moving blob of shadows and light, followed by a weirdly-black figure standing at the head of the tunnel, where Lena is now standing. Next, in the main room, Kane is shown committing suicide by phosphorus grenade. Before he does, he confesses he doesn’t much enjoy being mutated by the Shimmer, anymore than Anya did. He then asks the person behind the camera to find Lena. This other individual agrees, in the same voice as Kane. It’s over quickly and when Kane is dead, his interlocutor emerges, revealing itself to be Kane’s clone—the very “Kane” Lena has been trying to help this entire time(!).

At this point, the fact that Kane asked this doppelganger to send for Lena just so she could learn what happened to him might seem selfish and cruel. Then again, the Shimmer is an outward projection of the lighthouse alien. As such, it was changing Kane’s fabric and memories right up until his death—a kind of indoctrination, combining telepathy and telekinesis. Under this influence, he simply states, “I had a life. People called me Kane. Now I’m not so sure. Was I you? Were you me?” 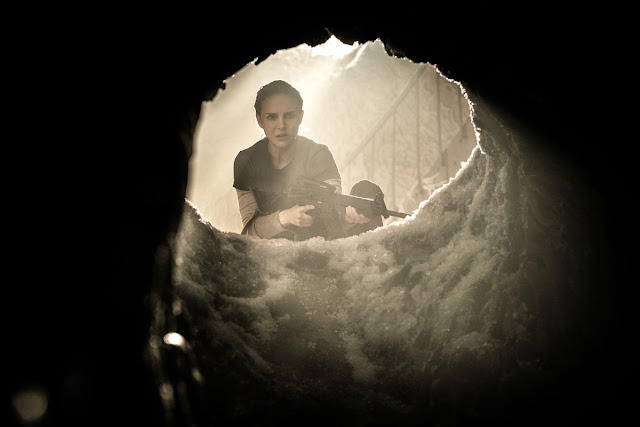 Like Kane, Lena has been duped. She’s hardly immune to the powers emanating from this place. So when voices whisper from inside that nearby dark hole, she tumbles down it like Alice, searching for the truth.