May 16, 2018
Before I begin, I want to apologize for the delay in releasing timely articles: It appears I’ve overestimated my ability to write short (1,000 words) articles, and to be able to write personal projects at the same time as graduate school projects. I'm caught up with school, at the point, and now have some time to write, again. Without further ado, here is my spoiler-filled examination of Alex Garland’s Annihilation (2018), divided into three portions: part one, two, and three.

As with the equally-superb Ex Machina (2015), Garland directed and screen-wrote Annihilation. He also produced and screen-wrote Dredd (2012), and worked with Danny Boyle on Sunshine (2007) and 28 Days Later (2003). All solid movies. Annihilation is effectively an adaptation of Jeff Vandermeer’s 2014 novel of the same name. Vandermeer's authorial intentions notwithstanding, Garland's movie is much clearer than the adapted material, and appears to explain/introduce elements from the other two novels Vandermeer wrote. As far as adaptations go, Annihilation is quite abridged, but manages to squeeze a lot of personality into what was, in my mind, a rather faceless and intentionally-vague story by Vandermeer. 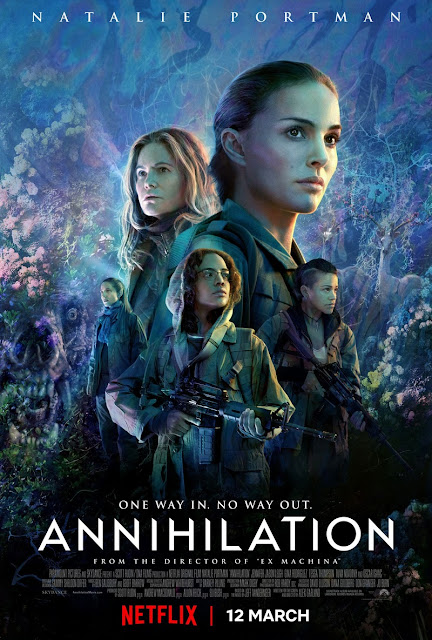 Personally I think it works splendidly (whether or not you will depends on how much you loved the book, and how much you can handle liberal adaptations). Make no mistake: this is a loose adaptation, but a unique one that stands on its own two feet. That being said, I'm currently in the UK and had to watch this movie on Netflix; to my knowledge its theatrical release, here, was denied, as it performed poorly in North American theaters. In regards to that, I feel the negative response this movie has gotten is largely due to its deliberately cryptic nature. I don't feel it to be ambiguous, as it provides clues that add up to something singular and foreshadowed; more on that, in part three.

Annihilation opens inside a glass chamber. A nameless brunette heroine, dressed in white hospital fatigues, sits across from a hulking, nameless man (sci-fi journeyman Benedict Wong, who also appeared Boyle’s Sunshine). He and two equally-solid compatriots wear hazmat suits, while a group of anxious onlookers watch dumbly from behind a solid sheet of thick, impenetrable glass. The palpable silence is thick as wool. The man's glassy eyes stare blankly through the transparent face plate, behind which the suit's internal lights throw his sallow face into grim relief; like a shark, he never seems to blink.

Eventually he speaks, and when he does, he does it suddenly and without introduction (we never learn his name, but know exactly what he represents: the company scientist). "What did you eat?" he drones, through his mask. He speaks slowly and directly (often in overdubs, across cross-cut footage that jumps back and forth, throughout the movie) but the inquiry sounds odd, without context.

The protagonist’s name is Lena, we learn. That’s more than we ever got from the book, which felt almost epistolary in nature, talking to itself more than to us, and in isolated fragments. Garland supplies us with Natalie Portman; her Lena lends our heroine a face and a name. Vandermeer intentionally redacted such details. Physical descriptions were kept intentionally vague. Instead, the women proceeding into Area X (versus “the Shimmer,” in Garland’s version) were known only by their professions: the biologist, psychologist, etc. Had Garland wanted to be faithful, he would have framed the shots or positioned the actresses in such a way as to keep their faces perpetually hidden; he would have kept the women nameless. He does no such thing. They all have faces, names, and backstories. 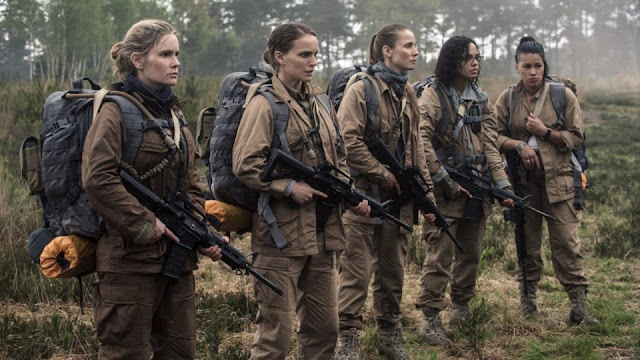 Like Frankenstein (1818), this is a framed narrative. The movie starts during the epilogue, in the glass room, but jumps back and forth. As Lena tells her side of things, the narrative unfolds in a different order than in the book; it proceeds in ostensibly straightforward fashion, essentially at the beginning—not when Lena begins meets her husband, but when he returns to her after having been missing for a year. The beginning of the movie is technically in the glass room; but the beginning of the story starts with Lena’s mission being launched, following Kane’s subsequent hospitalization.

Yes, her husband is called Kane (there are other Biblical allusions in here, courtesy of Garland, I believe). When Kane returns, he is strangely blank. He can't remember anything prior to walking up the steps into her room. Something is clearly wrong with him. When the two are in the kitchen, Lena hands him a glass. After a slow, mechanical pull, he sets it on the table. The camera focuses on the rim and remaining water inside. Both are stained with blood. En route to the hospital, Lena and Kane are acquired by a military group; from there, they are placed under house arrest in Area X (which again, Garland made into a science facility versus the invaded landscape it was, in the book).

In Area X, Kane is revealed to be dying. Lena can’t see him. It appears her only hope at answers is to proceed into the Shimmer (so she thinks). Four other women join her. Once they’re inside, the entire story revolves around them, save for several flashbacks central to Lena. Because they occur in a framed narrative, though, these flashbacks are, themselves, inside flashbacks (more on that, in a bit). Everything leads up to the ultimate conclusion in the lighthouse, and later, in Area X.

The lighthouse is central to the story in either medium. However, whereas Vandermeer exposed it, right off the bat, Garland saves it for last. Granted, he shows a meteor fall from the heavens, early on; the camera chases its tail, filling our eyes with a strange, kaleidoscopic light (one the movie will revisit, in the final act) before the space rock falls towards earth, hitting the lighthouse. From it, strange colors push outward like a massive blown bubble. It’s effectively Lovecraft’s “The Colour Out of Space” (1927). However, instead of poisoning the land, from the offset, the Shimmer warps it, refracting everything inside—from the radio signals emitted by the crew’s equipment to the very DNA in their bodies.

As the women penetrate the Shimmer, it penetrates them, and they go insane. Lena calls it a suicide mission; Ventress, the mission shrink, says she’s confusing suicide with self-destruction. All part of the fun.

The second act is largely concerned with the flora and fauna. Each exhibits impossible mutations—brought to life with excellent visual effects, both practical and digital. Matter-of-fact and professional, Lena describes it only as a biologist can. The other women draw their own conclusions. At first, they feel exempt… until they see signs. To be sure, there are too many to quickly list, here. I especially enjoyed was the human “fossil.” The women find it smashed into the side of a mostly-empty swimming pool. The skeleton spreads out like dinosaur bones. Parts look human; others do not, and much of it appears frozen in a state of change, versus actual decay. 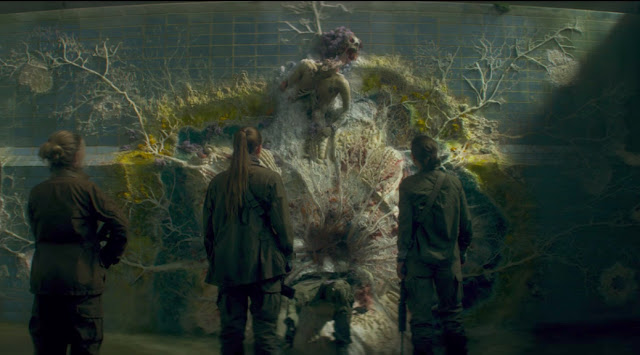 Next, there’s the memory drive. On it is a video. Inserted into the camera, the video plays. It features a lucid, shirtless Kane using an army knife to perform some do-it-yourself surgery on a fellow, delirious member of the expedition. He carves the man open, lifting the front of the other man’s thorax and pulling it aside like a car hood. Under it, exposed worms writhe and wiggle. Those are definitely not his organs. Understandably the women are not pleased—least of all Lena, who has continued to keep the fact that Kane is her husband a secret (this becomes problematic, later).

Read part two, here.
***
About me: My name is Nick van der Waard and I'm a Gothic ludologist. I primarily write reviews, Gothic analyses, and interviews. Because my main body of work is relatively vast, I've compiled it into a single compendium where I not only list my favorite works, I also summarize them. Check it out, here!
I'm an artist and a writer. If you're interested my work and are curious about illustrated or written commissions, please refer to my website for more information. If you want to contact me about a guest article, please use this contact form or reach out to me on Discord (vanderWaardart#5394)!