May 26, 2018
Here, in part two of my review for Cobra Kai (2018), I address the show's large cast (and the diverse, complex interactions between them). Part one outlined my concerns going in, and the questions I want to address throughout the entire review. Part three shall examine the show's conclusion, sexual content, and larger themes. Spoilers!

Johnny is a complex character. We sympathize with him and Daniel as much as we do because they feel human to us. This is because Cobra Kai is patient; it takes its time. Much like a professional fight, it has rounds. Our feelings evolve per exchange. Gradually the drama and comedy unfold—realized through a series of complicated bouts, each involving multiple, interwoven participants. How things start off isn't always how they end. 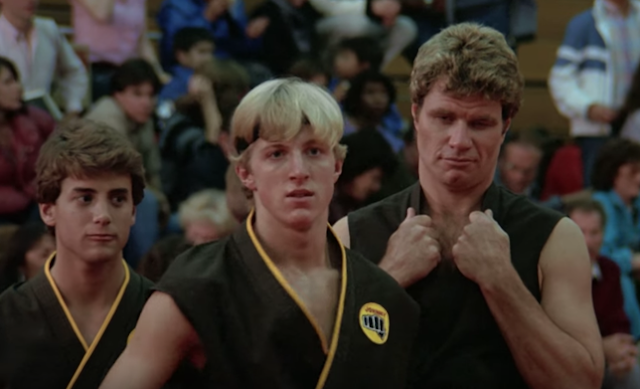 This is true on and off the mat. For example, when Johnny and Daniel first meet, Daniel comes off as smarmy. He's tickled to see his old rival so defeated—by time, more than by him. Vae victus, indeed. The former underdog is flanked by two co-workers in suits, who point at Johnny and laugh.

In this scene, Daniel is genuinely hard to like, and his cronies seem pretty sure of themselves. As it turns out, one of those cronies, Louie, is actually Daniel's cousin (at first, we don't even know they're related; later, we discover Daniel only hired him because his mother asked him to). Despite the bitter first impression he gives, Daniel is actually a good father and teacher.

Teaching is largely what the show is about, and what it contains: "There are no bad students, only bad teachers." In Cobra Kai, teachers are also fathers, or vice versa. The aim is balance, at any point in life. However, our figurative or literal children don't always listen to us. Daniel's daughter, Sam, rebels against him; Johnny's son, Robby, rebels against him. In the end, Robby winds up being taught by Daniel, and Sam realizes she was wrong about Miguel. And yet, the threat of the star-crossed lovers endures. Even though Sam leaves Miguel, a student of Cobra Kai, she returns to her father and risks falling for Robby, the son of her father's sworn rival. The tension remains, without feeling rote or predictable. As a result, I felt like I was watching a Karate Kid story, but a very good one.

Given how utterly massive the cast is, the show's success in this regard is notable. It effortlessly finds its own balance amid a bevy of incredibly sympathetic characters. It also employs rivalries to create tension, and uses first impressions to lower our guard. What matters after the inevitable knock-out punch is that, in the end, we still sympathize with Johnny and Daniel. Both men make mistakes, but repent, and try their best to make amends. The drama stems from their lack of complete success. To be sure there is no fairy tale ending in this quest for balance ("It'll never be over between us," Daniel laughs). Daniel, himself, tricks a local landlord in raising Johnny's rent, but succeeds in raising everyone else's at the strip mall, too.

On the other hand, Johnny argues and fights with his son, but ultimately offers to help raise him. He wasn't there when the boy was born, but wants to make things right. In this case, the thought is truly what counts, here. When things don't work out, we know that Johnny did his best. He's not perfect, though, and when he stands at a mother's door, we're not sure if it belongs to Miguel's or Robby's, because the camera is pointing at him. This clever bit of camerawork and dialogue highlight the tension and uncertainty the show provides with its drama. In spite of what happens, Johnny remains sincere. Even though he chooses to tutor Miguel, he still loves his son; even though Robby betrays his father by deliberately choosing his rival as a mentor, he still loves his father, and both men want their students and their sons to do well.

Whatever the case, this chess set of characters felt very real—in the choices they make as guided by their feelings. Watching characters transform before you eyes, make mistakes, and find forgiveness (sometimes) is all part of the fun. I enjoyed Sam ping-ponging between boys more than I expected. She's erroneously lead astray by her feelings, but can satisfactorily stand up for herself, when the shit hits the fan. Consider the movie theater scene: Here, the perfidious bully seems to have Sam right where he wants her. When he repeatedly makes aggressive physical advances, though, he unwittingly forces her to defend herself, and she embarrasses him wholeheartedly.

I absolutely cheered, here (odd, since the seminal experience of viewing media theatrically has fallen by the wayside; and yet, in an age where we watch things in isolation, the show made me want to cheer, all the same). Watching her get the better of him felt wholly plausible and tense. One, it was in a public setting. Two, she's constantly advertised as smaller than he, thus is never exactly safe, in retrospect, despite getting the better of him. Her victory is short-lived, though. For all the scenes that are caught on camera, the attempted rape isn't, and the bully uses the lack of footage to tell his version of events. Worse, people believe him, automatically taking his side and leaving Sam at the mercy of the very forces she ignored when her friend, Aisha, was on the receiving end. Some of the lessons the show teaches are tough ones, and it pulls no punches. 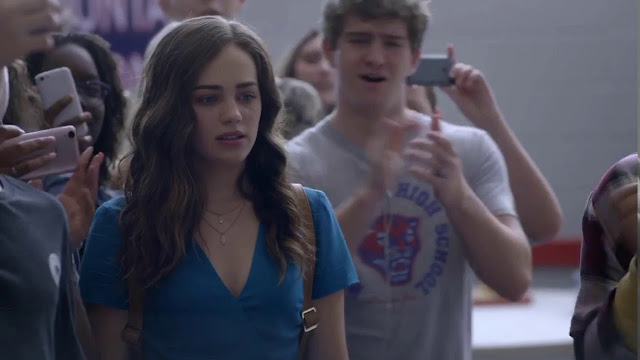 I suppose I should comment on Miguel, the poster boy of the new generation of Cobra Kai. I initially felt his transformation—from weakling to able combatant—to be forced, formulaic. Then I realized his metamorphosis was ongoing. Sure, he gets the girl, but then he loses her and can't seem to understand why. In the end, he still has something he needs to learn. So does his rival, Robby. Everyone does, youngsters and old-timers alike.

I enjoyed all of the central characters, but some of the most effective and enjoyable were the secondary ones, old and new alike.  Courtney Henggeler proved a solid addition as Daniel's wife, Amanda (and watching Randee Heller reprise her role as Daniel's mother was worth it simply to watch both women lose their cool, much to Daniel's chagrin). Perhaps more than anyone else, I loved Eli, who transforms from his mild-mannered self, into Hawk, his alter-ego. He takes risks and reaps the rewards, while the perfectly nerdy Demetri chews the scenery in perpetual disbelief. It isn't a total victory for Hawk, though. Yes, he swears, and acts as Johnny taught him. However, much to Johnny's horror, the boy also cheats, kicking his opponent in the back to be disqualified from the tournament. Hawk has great potential, as a comedic and tragic character, and all aspects of his character and humanity are maximized as the show progresses.

This is true for virtually everyone in the show. What's more is that Cobra Kai abides by perennial lessons concerning balance—none of which would work if the characters onscreen were simple. They are not; each has a light and a dark side, in themselves, and often a foil (or two) to complicate matters. There's a lot being juggled, here, and yet the show never drops the ball, never feels like a case of the sequel trying to be bigger and better than the original. Instead, it takes the logical course of people aging and having children, then passing their lessons onto the next generation, for better or worse. Never once is it boring or predicable. It's easy to follow without being simple, fun without feeling cheap.

Continue on to part three, here.

Sidenote: Watching the show, I found it impossible not to dwell on of the current misogynistic state of affairs in America—with incels (involuntary celibates) complaining about their lack of sexual attention from women. Here, Demetri is probably the most likely candidate, but the toxic discourse of incels and another groups simply didn't exist, in the show. While this gladdened me, I have to wonder if this way of thinking will ever be addressed in mainstream media. Perhaps it should, and sooner rather than later.