February 02, 2018
This is part two of a three-part review of Catherine Hardwicke's Twilight (2008). Part one examined the literature preceding the movie; this shall, too—namely expressing my woes on Meyer as an author and what "good" writing actually is. Part three shall focus mostly on the movie, itself.

Fans of Stephanie Meyer, be forewarned: I'm about to barbecue your sacred cow. As I do, the wish isn't to sound like 18th century critic Alexander Pope: mercilessly condemning his contemporary female readers for overindulging in Gothic novels. Such works were unfairly dubbed as "terrorist literature" because their "dangerous" content threatened to corrupt women's minds (whatever that means). Thanks to the internet, I imagine Twilight doesn't pose the same kind of "threat" as explored by Jane Austen in her posthumously published, Gothic pastiche, Northanger Abbey (1817). Even so, I still think there's something unfortunate about watching so many young minds gorge themselves on Meyer when they could do so much better inside the same genre.

People have a right to read trash if they want, be it assumed or actual. That being said, I have to wonder if Meyer or her army of readers represent Austen's aloof and Gothic-crazy Catherine Morland. This brings me to the biggest problem I have with any series: when people can't see past it, despite 'it' not amounting to much. I give credit where credit is due, but a myopic consumerism that constitutes the zenith and acme of someone's imagination becomes problematic when the material in question pales in terms of actual imaginary content or 'value' seen in older pre-existing literature.

I don't want to discount the approach of making a series or trilogy one's sole-focus, though. For example, Tolkien's Lord of the Rings (1954-55) demonstrates a capacity for content that can be mined and studied for ages; and if those are too dry for one's taste, The Hobbit (1937) is an excellent alternative (fun fact: Tolkien's "trilogy" was meant to be published as a single novel, but his publisher forbid it). At the same time, when reading Twilight, it doesn't take me long to see that it and The Fellowship of the Ring (1954) are on completely different levels, in terms of actual value.

What is value, though? After all, content alone doesn't automatically translate to quality. There are also other approaches towards writing beyond novels; not everyone writes those. Sure, Ann Radcliffe and Matthew Lewis (famous 18th century Gothic novelists alluded to, by Austen) did, but there are also short stories, another popular and successful format.  Indeed, as a mode, the short story demonstrates dense content or narrative complexity as non-vital. The Argentinian author, Luis Borges wrote nothing but excellent short stories, as did H. P. Lovecraft (with the exception of one novel and novella, in the latter's case). Meanwhile, George Eliot wrote Middlemarch (1871) and Charles Dickens Bleak House (1853)—one, published in eight volumes, the other as a serial spanning from 1852 to 1853; those weren't novels, at first, but are published in that format, nowadays.

The point here is I love Borges; and, if I read them as they originally were published, I also enjoy Dickens and Eliot; Lovecraft, too, is excellent, for what he is. I can make complaints about them—about Lewis or Radcliffe, or about Austen, referring to them—but everyone's books are readable, to varying degrees. Each has value, meaning it gives me something I actually want: content, and if not that, then focus, and if not that, then light schlock—something. Some are palatable more so than others are, but each remains enjoyable on some level. Meyer's novel, Twilight, is not, and yet, when it was popular, I saw veritable legions of fans around the world devouring it as though it were manna from heaven.

What gives? Catherine Morland was aloof, but at least she read books of some arguable substance (not according to her own critics, however). If you want to debate that, then keep this in mind: Morland's literary diet at least consisted of novels where the author knew how to punctuate; the biggest problem I have with Meyer is she doesn't. It's like a sixth-grader waltzed into the nearest giant publishing house and mass-printed the world's worst first draft as a joke. Except it's not a joke; her writing is truly low-grade cat shit, but the children of today's age and day can't seem to recognize that, and their "loud" voices on social media virtually guarantee the steady production of this kind of material, for future generations.

To be clear, I don't have a problem with reading books that one grows out of. I have a problem with popular novels being read by people who will take Meyer's "style" and make it their own. In Phaedrus (c. 370 BC) Plato argued that writing as technology would amount to the death of memory. With Meyer, I fear, her work will contribute towards the death of writing (or at least its gradual decline). She's not a Modernist, like Faulkner, or James Joyce, writing in stream-of-consciousness. She's just grossly incompetent, writing badly in what can only be described as "the novel version of crayons" while her fandom raves about how amazing she is. The generation of wealth is not synonymous with writing as a skill. As for value, Meyer is  giving these girls what they want; yet, is it wrong of me to expect more of readers, as well as novelists?

Perhaps I'm old fashioned; or perhaps Stine's novels would have experienced a similar level of mania in the 1990s had Twitter been around, back then. Who knows. If so, one could still pick up his books and read them without tripping over grammatical or spelling mistakes, one after another.

I'm not just bothered by grammar or spelling as far as Meyer goes. What's really discouraging is that her story exists for one reason: to cheaply invoke adolescent girls' sexual fantasies. However, it is possible to do this and affect the reader (to generate suspense, or maintain a solid and engaging narrative ark; etc). What bothers me about Meyer is she doesn't even try. It boils down to a simple binary of "Team Edward" or "Team Jacob." It's fine to have that kind of romantic choice being made, but please, for the love of god, have something else going on! Otherwise the pandering feels really transparent—all due to Meyer only being interested in working hard enough to milk the system for all it's worth. Where's the actual craft, here?

Most people probably don't care. I'm something of a connoisseur, however. Think Kambei Shimada, from Kurosawa's Seven Samurai (1954): He looks at Kyūzō dueling the blackguard in the field and can tell at a glance who the superior duelist is; it's as clear as day. Like Kambei, I, too, can make comparisons and tell which is superior—not from a glance, even, but from having read whole books by Meyer and any of the other authors on this list. The verdict? Meyer's writing is absolute garbage. It has no redeeming qualities. The already-unfortunate inhabitants of the last Circle of Hell, in Dante's Inferno, should be doomed to read it, ad nauseam, until they beg  Satan to devour them, just to make it stop. 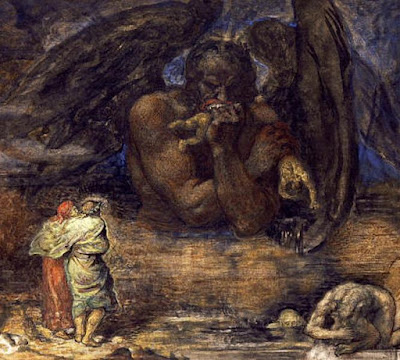 And this is why I liked Twilight  the movie. It's not nearly as bad. I've seen it ripped to pieces, by critics, to be sure, but no amount of arguing can convince me it deserves the same special place in hell that Meyer's novel does. It's effectively the adaptation of what amounts to, quality-wise, a R. L. Stine Young Adult movie for 12-year old girls: not abysmal, but also not great. It just kind of is.

In part three of this review, I shall look at the movie, itself, in greater detail.
***
About me: My name is Nick van der Waard and I'm a Gothic ludologist. I primarily write reviews, Gothic analyses, and interviews. Because my main body of work is relatively vast, I've compiled it into a single compendium where I not only list my favorite works, I also summarize them. Check it out, here!
I'm an artist and a writer. If you're interested my work and are curious about illustrated or written commissions, please refer to my website for more information. If you want to contact me about a guest article, please use this contact form or reach out to me on Discord (vanderWaardart#5394)!