February 04, 2018
Here is part one of a three-part review of David Robert Mitchell's It Follows (2015). It shall examine much of what works about the movie; part two, what doesn't; and part three, the thematic implications, as well as why the movie still mostly works, despite not being "perfect."

Unlike most movies nowadays, I had already seen It Follows several times in theaters before watching it on Netflix. To that, by the time I sat down and watched it with my partner and their other boyfriend, I had already seen the movie twice: once with my brother, and another time with our half-brother. This is because, in my opinion, it is a really good movie (we van der Waard boys all enjoyed it). I wouldn't venture so far as to call it perfect, by any stretch; it has quite a few problems—the typical sort that often plague horror movies. Despite these symptoms, it still manages (for me, at least) to be incredibly enjoyable. Not as good as it could have been, but still plenty awesome.

Much of this has to do with the movie's sterling audiovisual presentation. The creature, simply called "it," is either invisible or takes on the appearance of normal, everyday things; if it does have a "true" appearance, we never see it. In other words, there are no flashy special effects to distract us from the fact that we're essentially looking at people for the entirety of the film's run-time. To make this unnerving is to make these persons uncanny and to do that, the movie reaches into a rather old, but trusty bag of tricks (the sort that many-a-low-budget horror film have relied on, since the genre's inception): presentation, chiefly with creepy music, effective framing and deliberate, careful camera work.

John Carpenter's Halloween (1978) was a horror film with a low budget; in it, Michael Myers, credited as "The Shape," stalks Laurie Strode and other women, throughout much of the movie. Stalking or the sensation of being hunted, runs rampant throughout the genre, and can be traced as back far as F. W. Murnau's Nosferatu (1922) if not earlier. It's a classic theme, too, also appearing in iconic, seminal movies like Fred M. Wilcox's Forbidden Planet (1956). Along with Halloween, and Ridley Scott's Alien (1979) the monsters onscreen generally aren't anything—that is, they are invisible, appear laterally or in the periphery as human shapes. They can seem different, but for the most part rely on our imaginations to take something non-existent or ordinary and turn it into pure nightmare fuel. When all's said and done, there's not much of a difference.

It Follows adheres to the same reverse logic, attempting to solve the problem any film maker must contend with: how to make a thing scary when a camera is pointing directly at it, for two hours straight? The answer is, you don't—point the camera directly at it, that is. This is because the audience isn't afraid of the monster; they're afraid of the shadows that hide it, or the fact that they can't see it, because it's invisible or presaged by something "ordinary" that's acting just a little bit off. Our mind gets confused, and panic is reliably allowed to set it.

The genius of It Follows lies in the presentation of the creature, and how Mitchell and his team package it. The movie is expertly photographed, featuring long takes with minimal, often zero, cuts, as well unusual (outside of art-house circles) shooting techniques.

One sequence I enjoyed, in particular, was the scene where Jay and her friends march into a neighboring high school to confirm the identity of a former boyfriend: The entire scene is captured by the camera, which slowly rotates, allowing us to catch glimpses of the surroundings but not stare at them. Our eyes may be drawn towards certain movement, on-screen, but can never fully focus on anything, given that the camera itself is already and always moving. Furthermore, the effect isn't dizzying—largely thanks to the speed of the rotation not being fast enough to actually blur what we're seeing.

The cycle occurs twice. It starts zoomed-in, and begins to rotate clock-wise, showing us a view through a window of the school lawn, on which someone is walking right towards us. Despite the rotation, "we" as the camera stayed fixed, grounded—spinning but not moving as the person approaches—us, I might add; it is walking towards us. By the completion of the first cycle, this individual is revealed to be closer than before, shuffling at a snail's pace in our direction. We already sense who this is, even if a) we cannot focus on them or b) they appear normal.

And then, in a clever twist, the rotation ceases; the camera halts, so our "backs" are effectively to the looming menace. We can't turn around, either. Instead, in a slow, myopic zoom, the camera tortuously zooms in on the office, where Greg and Jay are talking with a secretary. Even as they leave, the camera continues to zero in, to the extent that we can practically make out the individual photos in the secretary's yearbook.

This is all done in one take. Simply masterclass photography.

As Jay and Greg pile into the station wagon, where the others are waiting for them, they talk amongst themselves; Greg starts the engine and drives off. As he does, the camera sits between the driver and front passenger seat, while facing behind the occupants. We can see Phil and Jay's sister, in the backseats, and between their heads, the rearmost window of the station wagon. At first, the space between them (what's behind them) is blurred; then, it isn't, and we see a blurred shape materialize into the person from earlier—walking towards us as the camera was spinning, in the hall.

Here, we have Mitchell demonstrating a perfect understanding of how to frame a shot, and to manipulate objects in the fore, middle and backgrounds. He does this by using zoom and focus in order to direct our eye towards what he wants us to see, even if the people on-screen don't. From inside the station wagon, no one notices the approaching figure, not even Jay. Even if she did, she wouldn't know if anyone else did, unless she asked them. Alas, the monster resembles a student, and Jay could still be wrong. And yet, she doesn't notice it. Only we do, and maybe not in the first viewing.

This is a brilliant concept. Forbidden Planet  had a monster that was literally invisible—except, in its case, to everyone. Halloween had a killer that only Laurie could see, simply due to everyone else not paying attention—that, or they weren't his intended victims, in the sense that he wanted to scare more than kill them outright. It Follows  takes the concept a step further by literally making the monster invisible to everyone except those who are infected. Meanwhile, those who aren't can't see it, but can  become aware of its hitherto unknown presence. It's an interesting twist, but one that doesn't always work (to see how, read part two, here). 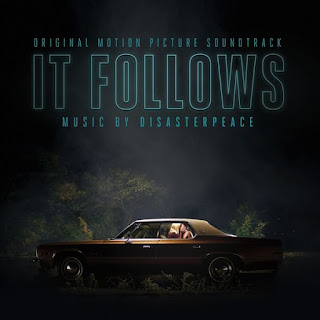 Before I go, the score by Disasterpeace also deserves special mention. It evokes a wonderfully-retro feel, reminiscent of 1970s/80s composers such as Klaus Doldinger or John Carpenter. Doldinger was Wolfgang Petersen's old standby and worked on musically-solid outings like Das Boot (1981) or The NeverEnding Story (1984). Carpenter generally wrote much of his own music, though occasionally collaborated with other composers—like Ennio Morricone, for the score of The Thing (1982).

Disasterpeace operates slightly differently than either. While Carpenter used his score to alert us of danger and Doldinger to evoke a sense of awe and joy, Disasterpeace generally lets us know that something is amiss, without usually serving as a cue of where to look. Instead, the camera  provides clues, usually by hiding the monster in plain sight, whilst the score percolates ominously. At times, it swells a little self-indulgently like Doldinger would, though more in a sense of awe—as in, an object of terrible-rather-than-benign origins. As a result, the music evokes the past, without feeling like a complete carbon copy. In short, it's great.
***
About me: My name is Nick van der Waard and I'm a Gothic ludologist. I primarily write reviews, Gothic analyses, and interviews. Because my main body of work is relatively vast, I've compiled it into a single compendium where I not only list my favorite works, I also summarize them. Check it out, here!
I'm an artist and a writer. If you're interested my work and are curious about illustrated or written commissions, please refer to my website for more information. If you want to contact me about a guest article, please use this contact form or reach out to me on Discord (vanderWaardart#5394)!