February 04, 2018
Here is part two of a three-part review of David Robert Mitchell's It Follows (2015). Part one examined much of what works about the movie; part two shall look at what doesn't; and part three, the thematic implications—as well as why the movie is still good fun, despite not being "perfect."

I loved It Follows. Imperfect though it was, it works best, I feel, when we know as little about the creature as possible. When Hugh kidnaps Jay and explains to her the nature of the beast, the suspense works as well as it does because no one believes her—no more than anyone did Mrs. MacNeil, in The Exorcist (1973). Likewise, we know the rules, but haven't had a chance to see them broken, yet.

Sometimes rules aren't, in movies. Alas, despite boasting a nebulous creature that can assume any form, It Follows  isn't quite focused enough to play by its own rule set.

For example, in the wonderful opening scene, a girl is shown running around, acting confused—a hysteria that ends in sad acceptance: her, resigned to her fate, all alone on a quiet, nighttime beachfront. There, she bites it. As Morbius, from Forbidden Planet might put it, "The symptoms were striking [...] In spite of every safeguard [she was] quite literally torn limb from limb." Like the Monster from the Id, the monster in It Follows  is at its strongest when we know nothing about it except the bloody carnage it leaves in its wake. 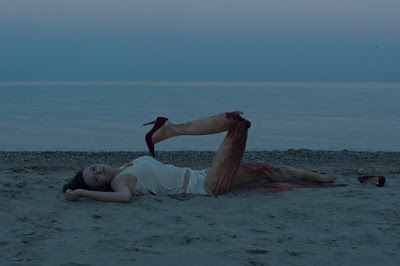 We also don't know it, at the time, but this girl is Hugh's girlfriend—as shown later, in a picture of them, standing arm-in-arm. Why he didn't tell her about it, or why she didn't listen, is never explained.

To the film's credit, it maintains a good balance of feeding us information, whilst keeping us in the dark. In short, it toys with us, like any good horror movie should. When Jay locks herself in her bedroom, she hears a knock at the door. She asks who it is, and is addressed by Paul. We relax; the monster can't speak, so—for a microsecond, at least—we think we're safe. And yet, we also know Paul can't see the creature, and that Jay is in a room with no obvious or safe exit; if she opens the door, there's not much Paul can do about it should the creature come inside. In fact, it could be standing right next to him and he wouldn't have a clue. So when Jay opens the door we shout at the screen, "Don't!" But this is part of the fun. The door is opened; the creature isn't there. It's just Paul and Jay's sister, alone.

"Where the hell is it?" we wonder out loud.

Here, the film continues toying with our expectations. Paul and Jay's sister come inside, and they shut the door, again. This process is repeated, with Yara eventually asking to be let in, as well. Alas, this time, when the door is opened, the creature is standing behind Yara, on the other side! Lurking past her as Disasterpeace's music comes wonderfully alive, the monster resumes its chase, and we're thrilled to have been right, after all.

Up until this moment, the movie is, in my opinion, absolute perfection—a perfection it maintains until the scene on the beach, where the monster grabs Jay's hair. This is the movie's first real misstep: the screenplay deliberately having a heretofore implacable monster suddenly stop to play. In effect, the monster is toying with its victim, much in the same sense that Billy Zane's villain did, with Nicole Kidman, in Philip Noyce's Dead Calm (1989).

However, it's one thing to toy with audience expectations in a way that feels clever—quite another to do it in a way that feels transparent, or cheap. It's worth nothing that the door in the earlier example was opaque, meaning we couldn't see through it. Thus, we're allowed to imagine what's lurking behind; if we're initially mistaken, it's understandable. But in the case of a monster standing directly in front of someone, there's no door to conceal what's going on, thus no room to imagine. Instead, we're effectively seeing the goings-on behind the curtain, potentially breaking the whole illusion, should the screenplay get any "clever" ideas.

I should add, it's entirely possible to have a killer hesitate in plain sight, provided it makes sense. It doesn't, during the beach scene, in It Follows. No satisfying reason is given as to why the monster doesn't immediately eviscerate the clueless-and-therefore-helpless Jay. Instead, it toys with her and I found myself feeling confused—pissed-off, even.

Later, I tried to theorize as to why this might be. In Halloween, Laurie Strode avoids death one-too-many times, almost seems to be a victim that is toyed with, by the stalker-in-question. The victims around her seem little more than props to instill a deeper state of already-mounting panic within Laurie. I think it works in Halloween  because Laurie isn't totally passive; she's able to fight back, "wounding" the Shape. Each time he falls, she stays just a little bit more resourceful and clever than he, like a mouse evading a cat. As a result, she's able to last long enough for Dr. Loomis to swoop in at the last second and fill Myers with lead.

In the case of Jay from It Follows, or Rae from Dead Calm (1989), they're equally helpless, when the time comes. Yet, the killer in each situation hesitates for no discernible reason. In Dead Calm, one could argue that Hughie, played by Zane, was savoring the kill... right before John Ingram, played by Sam Neill, puts a well-placed flare through his teeth. Said coup de grace causes the would-be-killer to stumble awkwardly back, spilling headlong over the guardrail while his cranium ignominiously detonates.

These tropes—of killer hesitation, and the resultant ignominious demise—go all the way back to Matthew Lewis or Ann Radcliffe. In their novels, the helpless Gothic "heroine" often lies supine before the tall, masculine killer (a naked attempt to place the intended victim in danger for as long as possible). The problem with this device is that, after a certain amount of waiting, it starts to feel ridiculous. More to the point, Hughie, in Dead Calm, had plenty of time to savor the kill, earlier. Now, him doing so doesn't really make sense, unless that's all he cares about—and yet, the heads of his victims, found earlier by Rae's husband on the scuttled boat, would seem to say otherwise. Likewise, so does the mutilated corpse of Hugh's girlfriend, left on the beach, at the start of It Follows. Her violent death seems to imply that no one is safe—women, least of all.

Except the monster ultimately plays with Jay instead of pulling her apart. Why? Even Hughie eventually got around to choking Rae; and the Shape, once it had Laurie well-and-truly cornered, began to squeeze. Such is not the case with Jay. Instead, the monster merely tugs on her hair—holding her in such a weak grip as to allow her to wiggle free.

Nonsense. Why should she be any different when it pounces on Greg and grinds him to death; or turns Hugh's girlfriend into a human seafood buffet (clearly it doesn't discriminate between sexes)? Is the hunter less inclined to silence Jay because she reflects something of a sexual predator, herself—someone who uses sex to stay alive? It's never said, and this time, the movie's silence is not necessarily to its benefit. In fact, given how loud and clunky the action is, the waters are only muddied: at "best," all the corpses and kills are reduced to lazy red herrings; at worst, nothing adds up.

Had there been a caveat of some kind to be discovered, after the fact, I wouldn't have minded. Think garlic, in vampire movies; or the mud, on Dutch's skin, in The Predator (1987). But there isn't one, in It Follows. No explanation is ever given as to why its villain stalls the murder-stroke. Some explanations sort of  make sense, in retrospect. However, by and large, I felt like they only did if I forced them to. In short, the beach attack, and much of what occurs after it, starts to feel rather clunky and vague by the time the credits rolled.

I shall explore the clunkiness further, as well as the movie's last-minute rebound, in part three of this review.
***
About me: My name is Nick van der Waard and I'm a Gothic ludologist. I primarily write reviews, Gothic analyses, and interviews. Because my main body of work is relatively vast, I've compiled it into a single compendium where I not only list my favorite works, I also summarize them. Check it out, here!
I'm an artist and a writer. If you're interested my work and are curious about illustrated or written commissions, please refer to my website for more information. If you want to contact me about a guest article, please use this contact form or reach out to me on Discord (vanderWaardart#5394)!