The Dark Crystal: AoR - The Good, the Bad, the Ugly

October 31, 2019
For October, I'm doing weekly write-ups on  The Dark Crystal: Age of Resistance (2019). This week is my final write-up (for now). In it, I wanted to explore what I liked, disliked and hated about the show. Spoilers!

Note: Originally this article was meant to be titled "Criticisms," but after some consideration I realized I couldn't think of enough criticisms to merit an entire article! That's not to say that I don't have problems with the show. Just, after watching through it twice—and sporadically peeking into individual episodes after that—I haven't come up with much. So this article might be a little lopsided. 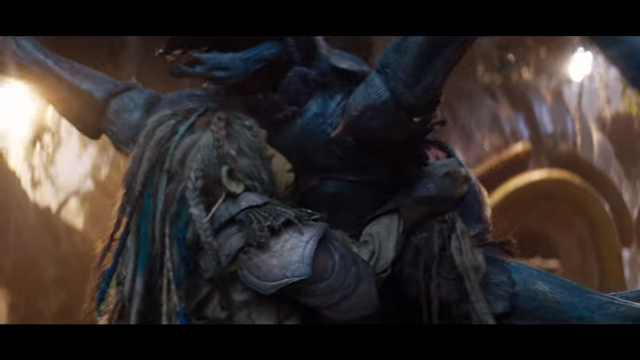 Believe it or not, my favorite aspect of the show is the photography. There were certain action shots (with the Arathim in particular) that involved a lot of digital effects. However, the camerawork did less to highlight that issue and more to emphasize how real everything looks. Closeups occur generously throughout, framing the puppets (and puppeteers) in a real physical space, with a camera that moves around the space to capture every little detail. There's almost too much information to notice in a single viewing. That's not a bad thing, either; it's the show's greatest triumph.

Take, for example, the puppetry itself. The puppets are hand-made, but boast further detail and functionality compared to their 1982 counterparts. The costumes are resplendent and varied—from the Vapran ladies' gowns to those of the other clans, and of course the Skeksis. Some of the outfits repeat, but only when it makes sense; soldiers, for example, are expected to have the same uniform. Any character with a speaking role has something to individualize them: their hair, a tattoo, or a scar. You could pick them out of a lineup if you wanted. 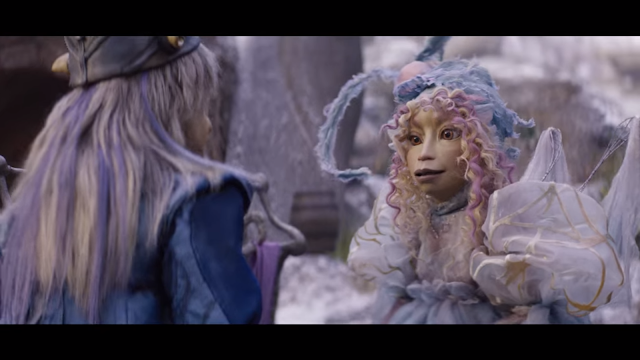 Apart from the costumes, the faces of the puppets animate mechanically. Eyes squint, and express themselves through subtle-yet-variable manipulation of the faces themselves. In short, they have face muscles—something The Dark Crystal mostly lacked. To compensate, I felt like Henson relied on exaggerated body and head motion. Since Leterrier has access to more expressive faces, his puppets are slightly less bouncy during moments of excitement.

The number of "puppet extras" is unprecedented. There must have been dozens upon dozens, but none looked shoddy or rushed in their construction; none appeared to be digital. The standard applied to the star players is also given to the briefest of characters. No matter how long or how brief, no matter the character, I never once thought "Yeah, someone's been slacking!"

Props. Aughra's magic ritual with the herbs and mandala, for example. She chews up herbs, pours sand, and throws rocks. And the whole time the camera is up close and personal, confidently demonstrating the simple fact that everything is real. At times, I felt as though I were watching a cooking show or nature documentary. No fancy computer effects. Just a camera lens and careful framing of the puppet and her props. 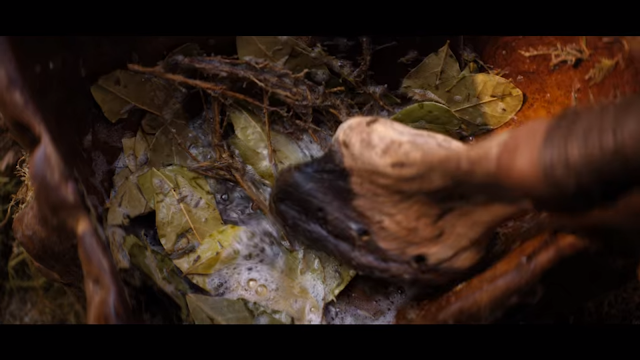 Voice acting—light years better than The Dark Crystal. There's more of it, and virtually all of it is great. Highlights include the Emperor, the Chamberlain and Deet, but there's plenty more than could apply for top spot, as well. There's loads of emotion and nuance from nearly the entire cast. They talk, whisper, laugh and scream; whatever the scene needs, everyone delivers with aplomb.

Action-wise, there's more time to do things, and Leterrier makes every second count. The Skeksis get into all sorts of trouble, and not just the Chamberlain. The Scientist makes mischief; the Hunter kicks ass; and the Emperor makes everyone's lives pretty miserable by being a delusional, self-serving bastard. The Gelfling get into far more trouble, it seems like, than Jen ever did—per episode, that is.

The writing itself. The sheer variety of characters, and juggling them all to have similar amounts of screen time and everything still makes sense. Nearly all of them feel unique in terms of their behavior. Physically, I can tell Brea and her sisters apart. Not just visually, but in terms of motivation, too. There's different levels to the drama and romance; the subterfuge, sedition, and skulduggery. However, all of it was easy to follow. I knew who hated or liked who, and why they were doing what they did. 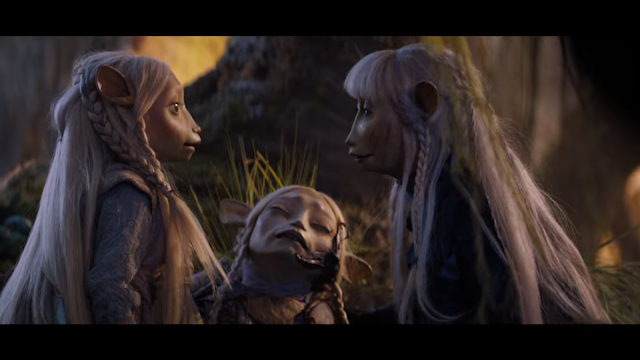 Editing. Despite so many moving parts, the show jumps around at a comfortable pace. Nothing feels truncated or rushed, and entire scenes usually play out before cutting to the next. Several scenes, like Aughra's awakening or the dual glaive “radio,” actually connect a lot of different event happening all at once, and these are equally clear and easy to follow.

While the voice-acting in the show is a marvel (considering its size), I wasn't sold on Lena Headey's performance. It's not that she did a bad job, voice-wise; it's that her slow, deliberate way of speaking sounded a bit too much like other performances she's given in the past. Simon Pegg has a pretty recognizable way of speaking. However, I could barely recognize him, or Benedict Wong. They disguised their human voices to fit into their respective roles. Headey sounded too human, too much like her real-world self. She was also a bit too stoic at times; it reminded me a little of Darth Vader, when George Lucas told James Earl Jones he wanted a monotone instead of a voice with style and personality.

Letting the Skeksis retreat also bothered me. The six clans arrive, and in force; the emperor responds with a devastating magical attack. Had it actually worked, it may have driven the rebels into disarray, or at the very least given the Skeksis a convenient escape route.  Against so many soldiers, the Skeksis basically had two choices: surrender or martyr themselves. Even if they destroyed the first wave of attackers, the bodies of the dead would simply pile up and trap them, making them easy targets for the rebel archers. 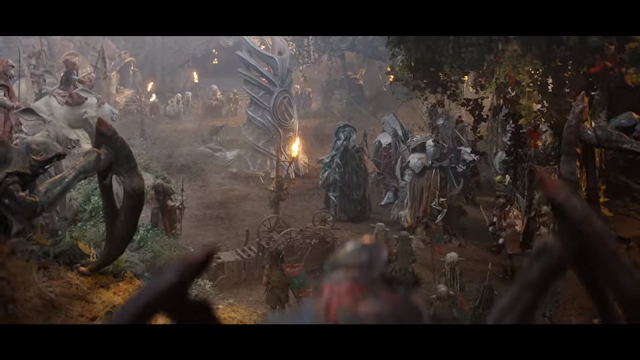 The rebel army has closed around them. There's nowhere to run. Instead of deliberating between each other, the rebels simply permit the Skeksis to flee, ostensibly opening their lines. Um, whose bright idea was that? The Skeksis are too dangerous to be freed, but that's exactly what happens. Giant oversight that it may be, this blunder gets quickly swept under the rug (which is probably why I'm not as bothered by it as I could have been). Instead, it was more of an afterthought. Like, "Wait a minute..." By that point, there were a lot of new variables to consider—the Garthim, the crystal shard, Dee's curse, etc.

Another complaint lies with the castle of the Skeksis. While the landscape shots looked pretty incredible, many of the castle shots left something to be desired. Nine times out of ten, the fortress looked too cartoonish. This is especially true when compared to the original movie, which used a model in many if not all of the shots. The chariots also stuck out. It was less of a problem up close, because everything was animated (except for the Gelfling puppets, mostly). At a distance, however, the chariots stick out like sore thumbs.

The narrator. Thankfully she's only present at the start of episode one.

To be fair, I thought they managed to squeeze more emotion out of Sigourney Weaver (whose latter day work is a bit stiff and robotic) than is typical. The problem was largely pacing and the number of lines: too fast, and too many. For example, there are plenty of points later in the show where the clans and all their complexity are explained, making the narration about them unneeded. Better to gradually "unfurl" the world as time goes on. In LotR, for example, Rohan isn't revealed until the second film, making it more of a surprise, a discovery waiting to be found; if you spell everything out at the start, the chance for that kind of serendipity is wasted. 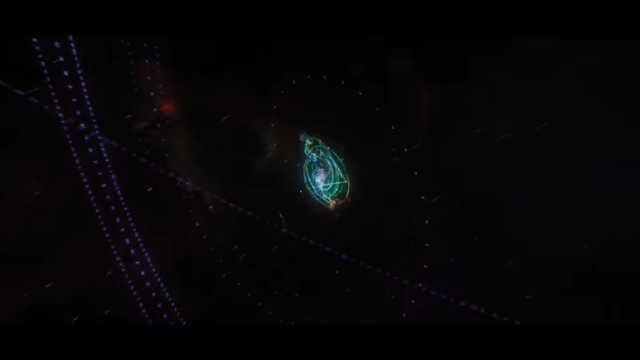 Furthermore, the swirling of the camera while flying through colorful symbols and compasses in outer space is odd and disorienting (and unlike how outer space actually functions). I don't mind the idea in concept—interstellar establishing shots can be breathtaking—but it felt rushed. Sigourney barely has time to read her lines before we're cutting to the next image, and the next. This was the one moment in the show where I really craved the original film—for its deliberate, less wordy narrator.

Put it like this: AoR cites the 1982 narrator ("Another world. Another time."); if someone makes a sequel thirty-plus years from now, I can't imagine them doing the same with Sigourney. Her dialogue is too plain, steady and factual; she comes off as a generic narrator for a nature documentary, not an epic fantasy.
***
About me: My name is Nick van der Waard and I'm a Gothic ludologist. I primarily write reviews, Gothic analyses, and interviews. Because my main body of work is relatively vast, I've compiled it into a single compendium where I not only list my favorite works, I also summarize them. Check it out, here!
I'm an artist and a writer. If you're interested my work and are curious about illustrated or written commissions, please refer to my website for more information. If you want to contact me about a guest article, please use this contact form or reach out to me on Discord (vanderWaardart#5394)!