October 11, 2019
For October, I'm doing weekly write-ups on The Dark Crystal: Age of Resistance (2019). There will be spoilers—lots of them. Last week, I explored horror as centered on the Skeksis. This week, I wanted to study it through a less likely but equally productive source: the Gelfling. 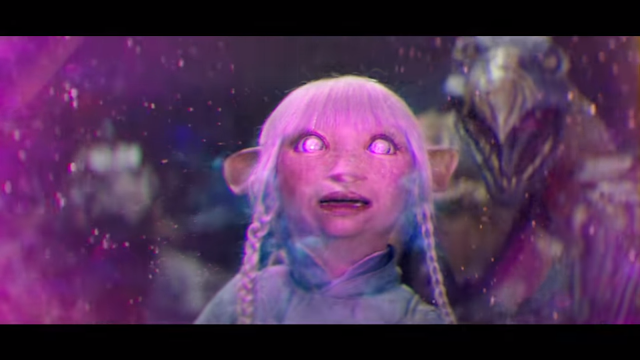 The Gelfling are an interesting source for horror, but produce it differently than the Skeksis. From a practical standpoint, they are uncanny. Unlike the Skeksis, who are deliberately fashioned to be hideous and ugly, the Gelfling are made to appear cute. However, they are also, at times, doll-like; there is a very real limit to their cuteness, which pushes up against the technological constraints manifest in dolls. The faces are cute; the eyes inside are lifeless ("A shark has blank eyes, a doll's eyes.").

This is a practical issue. Eyes are complex. They swivel in their sockets; the pupils contract and the irises change color. Or, at least, they should. Gelfing eyes do not. This problem is highlighted by the show's cinematography. The steady camerawork, careful framing and minimal editing means portrait shots are commonplace. There's no attempt to hide or conceal the fact that their faces are entirely practical, which ironically has its downsides. It stresses an occasionally blank, lifeless quality to otherwise superb craftsmanship. 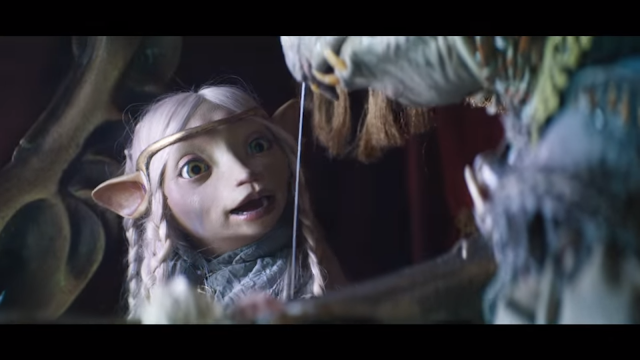 This isn't to say that the makers don't do their best to thwart it. They swap out eyes when they can, so that a stunned Gelfling looks stunned—literally. However, the number of ways a Gelfling eye can appear in a given shot is still precisely one. The longer the shot, the more obvious this is: Gelfling eyes don't change because they can't. All the same, they are unusually large for their owner's heads, and impossible to ignore. So is the fact that they are fitted into normalized bodies, which heightens the contrast even more.

I suspect the makers wanted to remain to true to the original. As a result, there are few instances when digital effects are used to enhance the eyes (this includes when a Gelfling is drained, and when Deet absorbs the Emperor's attack, in the final episode). For better or worse, our small heroes look as they did in 1982—uncanny. Conversely the Uncanny Valley doesn't matter with the Skeksis because they aren't trying to appear normal. However, it also doesn't apply to them; they're cartoonish and overblown (and have small, tiny eyes). In a strange twist, they are almost easier to identify with (at times) because we aren't confused by what we see.

I confess that this effect is lessened with certain characters. Deet and some of the other Grottan tend to have large pupils; their eyes look less human and more cartoonish, like Disney animals. The same is true of podlings, whose faces are more like misshapen potatoes—not human enough to infringe quite on the same level. 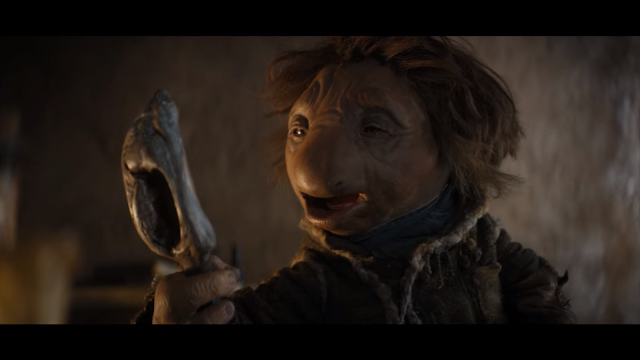 With all of these concerns, you might be wondering, "Does this affect the story negatively?" I would have to say no. A large part of this has to do with the writing and the world itself. Just like in 1982, Thra is lush and vibrant, but even more so. The scale and color of things has been pumped up and put proudly on display. And it looks great. Likewise, the Gelfling fit in. Uncanny or no, they seem much at home in this fantastical place.

This isn't strictly cosmetic, either. The Gelfling act and talk as they should. However, this highlights certain horrifying issues the Skeksis are unable to produce themselves. The Skeksis are horrifying. Make no mistake about that, just not in the same way the Gelfling can be. When the Chamberlain said "Gelfling small, weak," he wasn't entirely wrong. The Gelfing exude many weaknesses, including superstition, persecution mania and xenophobia.

Not all Gelfing are sweet and gentle. Many are lords and ladies who obey the Skeksis. In turn, they blind themselves to their lords' dubious personas, becoming baleful instruments that blight members of their own kind. The story begins with seven tribes, arranged from greatest to weakest. This tribal arrangement has racial lines. The Grottan are brown-eyed and olive-skinned; driven underground, they are forgotten, and treated with naked mistrust when they to emerge. So they don't. 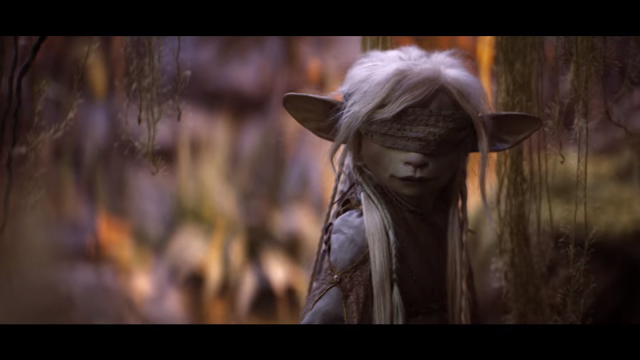 Meanwhile, the Vapra rule above ground; they lord over the mountains and dress in fine clothes, exacting annual tithes (an ancient form of taxation) for the Skeksis. In short, the so-called "greatest" of the Gelfling clans are little more than bean counters—a fact they exploit to lord over others no different than they. They rob their own for the Skeksis, who ply these tax collectors with scraps to grease the wheels. It's very political, with roots in real world events both modern and historical.

As the story progresses, it showcases many individual horrors that happen to, or are exacted by, the Gelfing. There are more I could write about. For the sake of time, I will cover four: Mira, Seladon, Tavra, and Deet.

First, Mira's death: Yes, she is killed by the Skeksis. However, much of what happens afterward is perpetrated by her fellows. As Rian tries to escape, the Skeksis hold off. Instead of chasing him too aggressively, they spread a plausible lie: Rian killed Mira. And the horror is, many of the Gelfling buy it; they're too superstitious to dreamfast with Rian, and too scared to commit heresy (a term the show repeatedly uses—the Gelfling speak and Skeksis words come out). 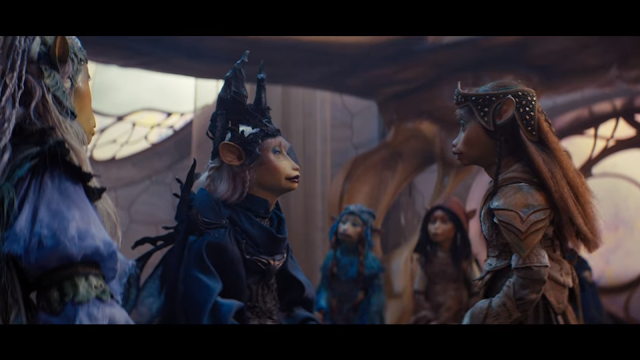 The best example of this indoctrination is Seladon. Loyalty to her mother is revealed to be loyalty to the Skeksis. When they kill the All-Maudra, the old woman collapses in a spreading puddle of pink blood. Numb with rage, Seladon burns her mother's corpse, and takes the crown for herself. Just as quickly she throws it aside for her own, dark version. This twisted persona mirrors her warped state, which craves order by any means. It's a symbol of dark, atomized power—a testament that, in Gothic stories, is generally bogus.

The horrors of Seladon are two-fold. She is not evil, but nevertheless inflicts great harm onto her family and clansfolk—all for an untenable, sympathetic goal: to save them. When Seladon visits the Skeksis, she bargains with the lords for this very reason. As she does, she tries harder and harder to meet their demands. She condemns her mother, but also offers up her own subjects that her sisters might live. The horror isn't that Seladon is selfish; she only seems this way because she's stubborn and tight-lipped. No, the horror is to what lengths Seladon will go to protect those she loves. Though deplorable, her actions horrify because they aren't  wholly alien; on some level, those with strong familial ties can identify with her blind desperation.

Alas, the Skeksis are done playing games. They laugh in Seladon's face, breaking her crown and tearing her dress. "How cold-blooded!" they cry. "She could be a Skeksis!" Except Seladon is not a Skeksis—just a Gelfing. Like the Chamberlain being disrobed, in 1982, Seladon is stripped of an office she never really had. Underneath cowers a scared, powerless girl who—horrifyingly—has to reconcile with her own sorry position: "Ruler of the dead!" 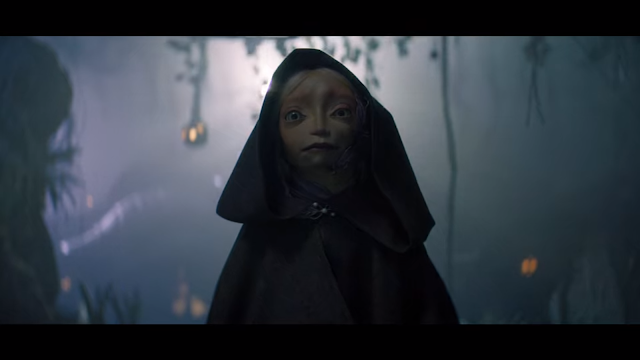 Sadly this rings true. Seladon's family has slowly been dying before her eyes. Consider Tavra: Calm and soft-spoken, she is eventually possessed by the Collective. This approach is awful enough as is: The flower-like parasites are disturbingly small, and skitter across the ground too fast to stop. Before the Stonewood can resist, they are enthralled. The flowers latch on, and the hosts march along staring blankly and speaking in half-alien voices. When the Collective are defeated, their "spell" breaks; the parasites fall off and die.

Not for Tavra, though. For her, the possession is complete. She and her parasite are one, morphing  into a single entity. Tavra is in there, somewhere, but her voice is ingrained with unsettling timbres, and her actions are not always her own. In a shared drive to kill the General, Tavra is mortally wounded. She is interred by her sisters, but the flower remains glued to her jaw. Brea and Seladon not only bury a loved one; they bury an alien, too.

Perhaps more than anyone else, this concept applies to Deet. The cutest of the bunch, and marketed as a potential love interest for Rian, Deet spends much of the story looking after her friends. She is innocent, but strong of will. Dee accepts the Sanctuary Tree's "gift." Their first exchange was blind; the second is more informed, promising misery for Deet, in the dark times ahead. To her own peril, she ignores the visions. 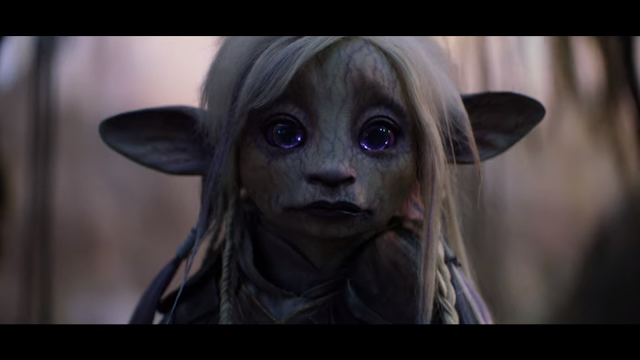 Deet hopes to save the planet; the horror is her doing so at the cost of what she is. When the Emperor uses his staff to unleash the Darkening on the Gelfling host, Deet absorbs the entire attack. When she does, her hair stands on end; her eyes burn violet. And never one to attack or hurt anyone else, Deet unleashes this power back on her attackers. Up to this point, no other Gelfing has directly killed anyone on-screen; it's always indirect abuse. Deet's riposte blows the Collector to smithereens.

This already belies Deet's former self. However, the horror proceeds our ignominious bloodlust. We cheer when Deet gives the Skeksis a taste of their own medicine, but cringe when things spiral out of control. After the battle, Rian goes to see Deet; she denies him, disappearing behind a curtain of vines and mist. Traumatized, she wanders the woods alone, closed off from Rian. She has become close with Nature and the Darkening—too close. And all Rian can do is stare, horrified.
***
About me: My name is Nick van der Waard and I'm a Gothic ludologist. I primarily write reviews, Gothic analyses, and interviews. Because my main body of work is relatively vast, I've compiled it into a single compendium where I not only list my favorite works, I also summarize them. Check it out, here!
I'm an artist and a writer. If you're interested my work and are curious about illustrated or written commissions, please refer to my website for more information. If you want to contact me about a guest article, please use this contact form or reach out to me on Discord (vanderWaardart#5394)!