October 04, 2019
Moving into October, I wanted to do weekly write-ups on The Dark Crystal: Age of Resistance (2019). There will be spoilers—lots of them. This week's write-up concerns AoR's use of horrifying content—mainly the Skeksis—to affect the audience.

In the Gothic, horror has a specific function: to shock and disgust. However, the ways in which this goes about are not always so simple. For example, seeing a Skeksis lord explode before our eyes might, under most circumstances, be unwanted. The core punch this discomfort offers isn't the explosion, itself, or that it was gross; it's that we, the audience, paid to be showered with it. An argument can certainly be made to its surprising nature; but the show's dark reputation for violence and horror falls in line with whatever comes our way. To rephrase, there are those in the audience who not only enjoy the gory mess; they'd feel robbed without it! The genius behind AoR is how it chooses to deliver the goods, and when. It evokes 1982, only to far surpass it. The original had plenty of garthim crawling in the shadows, for example. However, the on-screen violence was limited to basically a stabbing at the end. Yes, the Scientist screams while slow-falling into the heart of the castle, but we never see it happen. There's minimal visual impact, and even less blood.

The most protracted horror scene was the dining hall sequence. In essence, it allowed Henson to use the Skeksis as grotesque puppets in ways beyond their reptilian appearance; it included their behavior—how they ate, specifically. Their table manners were awful, but so was the food. It looked gross, but certain morsels were clearly still alive. Some, like the roast baby nebrie, were cute, and showed how the Skeksis would literally eat anything. The whole affair was majestically gratuitous, and wasteful in other ways. Like a row of evil cats, the Skeksis spent much of their time playing with their expensive, unhappy meal.

Like the baby nebrie, AoR is ostensibly cute. In truth, however, it is a buffet, extending its impressive horror feast over ten episodes. Each offers something to rival Henson's parent film: Mira's death; the peeper beetle, the bath sequence, the Collective parasites, the slaying of the Gruenak, etc. More often than not, the variety per episode is equally robust, delivering a host of nasty visuals pitted against a great many cute things being imprisoned, eaten, or killed. 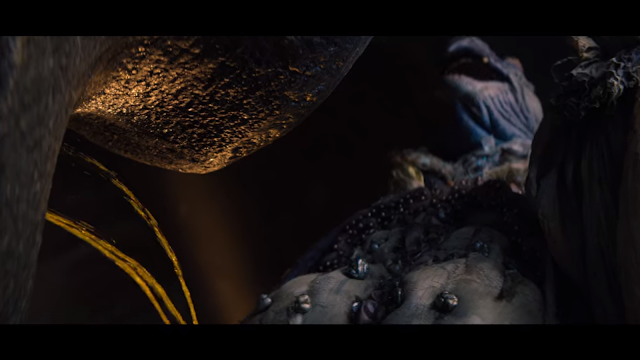 Some horrors are played for laughs, others for curiosity. For example, after the castle siege is betrayed, the Gourmand, tired from battle, leans against a wall to pee. Doing so, he produces not one, not two, but three(!) streams of foul-colored urine. My initial reaction was annoyance. However, the longer it went on, I felt my anger trailing off into genuine wonder. Mercifully the lord's genitals are kept hidden. All the same, this was the second scene in so many episodes where I found myself struggling to picture the exact nature of Skeksis "equipment."

As with their 1982 counterparts, the function of these horrors is to illustrate the Skeksis' penchant for royal excess. They piss on the floors of the castle; they greedily slurp the essence of murdered women; they place carnivorous beetles onto the soles of their feet to chew at festering sores. And throughout all of this, they are shriveled and fat "all at once!" Their limbs are like leathery poles with wasted skin; their bellies are as round as marbles, full of dead food.

The Skeksis are also incredibly vain. Despite knowing full-well how ugly they must be, they insist—comically—how beautiful they are. We hear the General say he is strong and understand; he is bestial and crude, but undeniably mighty in attire, attitude and appearance. We hear the Collector wistfully comment on his own beauty and scratch our heads; his nose, like a bouquet of sorry mushrooms, perpetually drips snot. So when the Scroll-keeper testily jabs, "You were never beautiful," it's hard not to agree.

The Skeksis' hubris stems into other areas—not simply their physical appearance, but also the very nature of what they are. They see themselves as the rulers of Thra; they ostensibly own everything and do whatever they want, when they want. Yet, the true horror of their existence is how little power they actually have. In the face of impending death, they shout louder and louder how they are immortal, while frantically scrambling for a solution. Unlike the gelfling they've cheated for a thousand trine, Death looms uneasily over the Skeksis crowns. This terrifies them. Instead of dying and returning to the planet as the gelfling do, the Skeksis are outsiders; Thra does not belong to them, and where they go after death is a mystery—doubly so if they die while separated from their Mystic brethren. Despite all their proclaimed power as the mighty lords of the crystal, the Skeksis are the show's biggest cowards. Cowards make for splendid bullies, though, and some of the lengths this lot goes to hold onto life and power is pretty incredible.

To this, each Skeksis embodies a different horrifying quality. The Scientist is Promethean; utterly without scruples and only interested in his work, he operates on his own body (and the bodies of others) in the hopes of illustrating his wayward genius. While none of the Skeksis are easy on the eyes, the Collector and Gourmand are physically disgusting in pointed ways. The Ritual-Master is zealously sadistic; he delights in torturing others, including his scaly cohorts. The General is a brutish hawk. The Ornamentalist is a makeshift mortician, decorating himself, but also the comatose body of the Hunter, who is nearly killed by the Archer.

Each lord takes their occupation to ghastly extremes. In this respect, the castle is something of an exhibit. Inside, sightseers may gaze upon each of the lords and see a different, aged aspect of humanity's worst. The point isn't to debate whether or not the Skeksis are evil (though it certainly can be argued that they are); it is to provide the audience with a mirror. There, we see Thra's most-powerful laid low by human vices and arrogance. This horror is "abjected," cast off the normal and onto the surface of some kind of outsider persona: the Skeksis. Beyond their rich textual facade, the real horror is how the relatable the Skeksis can be. 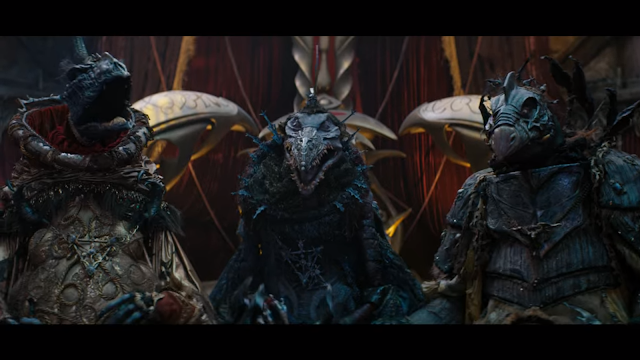 They also offer us a chance to indulge in our darkest fantasies. They lie, cheat and steal; they beat, murder, and splurge. So do we, vicariously. And any thrill for us betrays our own failing to be utterly unlike them. How could we be, when most everyday concerns are simply what the Skeksis have taken and twisted into a grander, nightmarish form? The point of this comparison is to magnify our fears and anxieties through attraction with the repulsive, wicked, and cruel. The Skeksis are certainly all of these things.

And like many Romances, much of their horror is woven into wild narratives of desperate power. As the Emperor's domain and physical self crumble, the Chamberlain undermines him (and everyone else) through perilous guile. This drives the Emperor to harness the power of the Darkening and whip the Scientist to take bigger and bigger risks. The pandemonium snowballs, and even this mixture—of culpable, giddy thrills—is horrifying in retrospect. Sure, we can hide behind cuter things like Deet, Rian and Brea. But what would the show be without the Skeksis to blight us?
Boring.
***
About me: My name is Nick van der Waard and I'm a Gothic ludologist. I primarily write reviews, Gothic analyses, and interviews. Because my main body of work is relatively vast, I've compiled it into a single compendium where I not only list my favorite works, I also summarize them. Check it out, here!
I'm an artist and a writer. If you're interested my work and are curious about illustrated or written commissions, please refer to my website for more information. If you want to contact me about a guest article, please use this contact form or reach out to me on Discord (vanderWaardart#5394)!