October 18, 2019
For October, I'm doing weekly write-ups on The Dark Crystal: Age of Resistance (2019). This write-up concerns the theme of appetites—how the show presents and explores them. Spoilers!

Age of Resistance is, amongst other things, a show about appetites, food. Multiple scenes portray gross consumption by the Skeksis. During these opulent gluts, they shamelessly gorge themselves, their tables sagging with endless essence, food and incense. Much of it is exotic, dressed up for optimal succulence. However, more of it is domestic, pilfered from the land around them. There is no limit to what they consume. 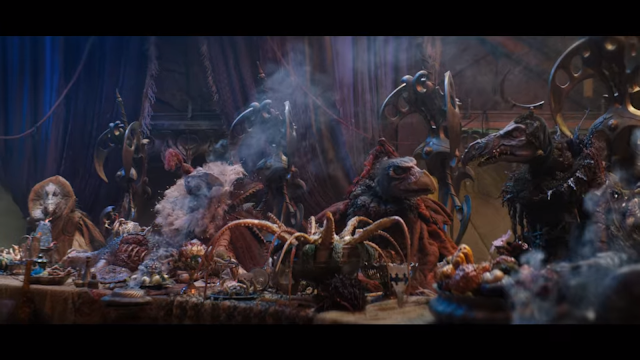 More to the point, the show connects appetite with its characters' individual wants and desires. Consider this conversation between the Chamberlain and Rian; both sit inside a carriage, winding towards the Castle of the Crystal:

Chamberlain: "All things kill. Is z'nid bird evil because it eats crawling nurloc?"

Chamberlain: "So do Skeksis; all living things consume other things to survive. Not evil. Natural."

So far, their conversation has outlined a natural order, upon which both races co-inhabit. Each of them eats to survive; the difference lies in how and what:

Rian: "There was nothing natural about what you did to Mira!"

Rian isn't wrong. While the Skeksis claim to crave order, their appetites sow tremendous unrest. On the other hand, the Gelfling are used to death. Less bent on staving off the natural order of things, they understand how death follows life, and vice versa. They accommodate this cycle in daily life, supporting each other through times of strife and hardship. They dream-fast together, forging bonds (sisterhood or otherwise) the Skeksis cannot. 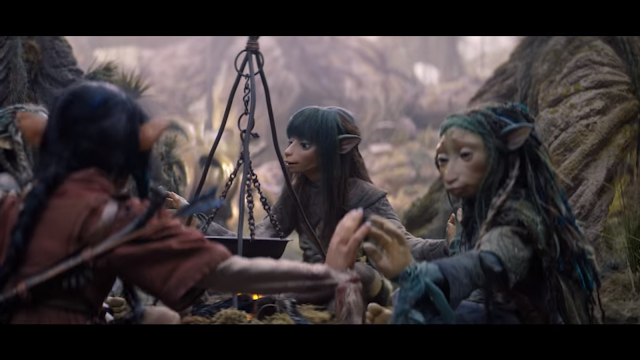 The Chamberlain confirms his ineptitude by shouting at Rian, "Death is unnatural; death is cruel joke! Death mocks life, mocks Skeksis. But no more. Skeksis conquer death. And you, Gelfling, will do same in Skeksis' place." He fails to understand why the Gelfling have no need to conquer death; when Rian grumbles, "We are nothing alike," the Chamberlain disagrees, stressing their troubling commonalities. Self-preservation is the end goal for both—a fact he reminds Rian of by pointing out the Gelfing's penchant for running. By this same token, though, the Chamberlain overlooks a glaring foil: The Skeksis are also adept runners, scrambling away from death as fast as possible.

All the same, there are key differences between the Skeksis and Gelfling. "Skeksis are immortal," Chamberlain explains. "We are to you as you are to crawlies." And, to a certain extent, he's right. Death affects them differently. The Skeksis aren't immortal, though; the more death nears, the more desperate they become—to maintain their fragile belief that they are. This appetite for life begets abuse unto lesser beings: "Enemies or pets." For Rian, this choice is bogus; his race is swallowed in both scenarios. However, it is illusory for the Skeksis as well; no matter how grand, their ravenous appetites cannot save them from impending doom.

Like any good dialogue, there remains an element of truth amid the spurious jabs. Both races fight to survive. Their styles differ, but remain part of a joined struggle against larger forces none can fully understand or control. In other words, their appetites are Promethean, but inverted per race. The Skeksis have a direct line with the Darkening and the Crystal of Truth; the Gelfing do not, are on the receiving end of the Skeksis' hungry blunders. Both navigate the ensuing chaos through personalized appetites: Rian desires love; Deet, altruism; and Brea, knowledge. The Emperor thirsts for longevity; the Chamberlain, for power; and the Hunter, for prey. Separate wants, unpredictable journeys. 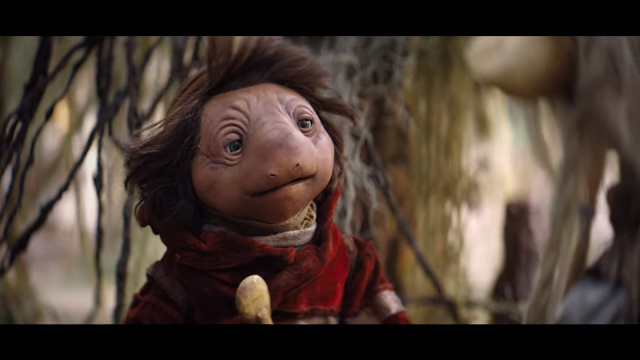 This makes for relatable figures. Hup, for example, desires to be a paladin. His actual status matters less than the fact that he wants  to be one. And when he and Deet arrive at the gates of the All-Maudra's palace, they want  to be there for the reasons stated above: Deet, to help her family and friends; Hup, to serve and protect Deet. To meet these needs, they get into a bit of trouble. Hup steals clothes, and Deet wears them. For the entirety of their quest, this camaraderie glues them together—not by force, but through understanding what drives them as characters. By knowing what they want, and what drives them to take risks, these risks become easier to grasp when taken.

By this same logic, we can understand the Skeksis' and their gambits. Used to power and control, they have much to lose—castles, wealth, their lives. Their stations drive them to lie, cheat and steal. Even if these actions are deplorable, they can still be understood by knowing what the Skeksis want: to not die. Fear of death isn't that hard to understand. Where it gets interesting is how different characters respond to that fear. Where they are and what they have—these inform how they act.

The show plies this concept to its monsters. Consider the Arathim—hideous, spider-like beings that spit acid. And yet, "The Arathim aren't monsters," Tavra explains. "They want the same thing. Justice." A tenuous position, I argue, considering the Arathim only moments before had taken Grot and all its population hostage. Only through immediate predicament did the Arathim change their tune, making for strange bedfellows. Then again, the Skeksis incurred the diaspora of the Arathim, driving the Collective under the castle for later use—subjugated like everyone else. 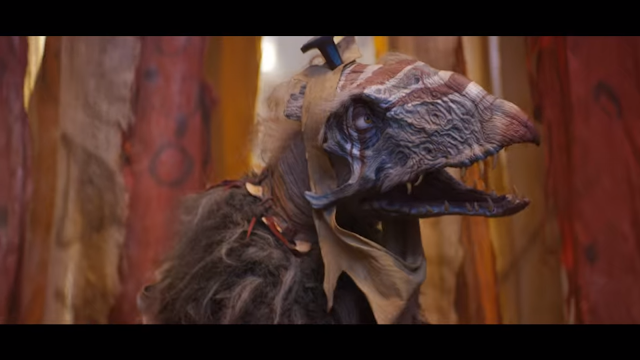 Another example is the Heretic—a once-brutal warlord-turned-pacifist. Rian, Deet and Brea mistrust the Heretic at first glance; they only relax when he admits to his past wrong-doings and offers to help them. There remains an element of doubt—a trap, perhaps? What separates the Heretic from his scaly brethren is what he wants. The Chamberlain, for example, wants to enslave the Gelfling and maintain control; the Heretic seeks unity between the Skeksis and Mystics. These are outsider races, but even they can find common ground with the indigenous Thra-dwellers should their needs overlap. Thus, the Heretic is hardly a monster at all. But he wasn't always good, either.

The show illustrates this concept through appetite. While the Heretic has none to speak of, the Lords of the Crystal drain Gelfling to consume their essence. While both races eat, the Skeksis' hunger defies the natural order—all things die. The Skeksis force the cycle to benefit their needs over those of smaller, weaker organisms. They eat not as birds do, but to cheat death. 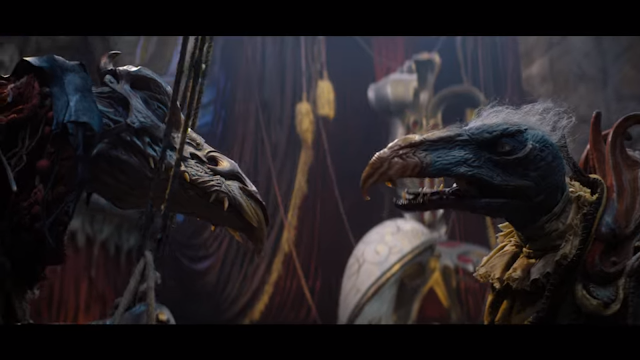 Here, the Skeksis veer wildly away from Gelfling needs and wants. When a Gelfing dies, it returns to Thra; memories of the dead are preserved in icons, trinkets and rituals. These help them live on in non-destructive ways. The Skeksis lack these talents, hanging the Hunter from the rafters. As the Ritual-Master says, there is no service for a dead Skeksis. They have no idea how to bury their dead, nor how to confront death at all. For them, death is a great mystery—something to fear.

This fear is what drives them. Birds eat to live, but not for fear of death; Skeksis eat because they are afraid, and mortally so. This fear sends them into gross and indiscriminate splurges, hideously overwrought with vampiric comfort food. And since there is no amount of food to be consumed that staves off death forever, the Darkening spreads, weakening the world. The Skeksis do not care, their all-consuming need to live blinding them to the mayhem their murderous hunger wreaks.
***
About me: My name is Nick van der Waard and I'm a Gothic ludologist. I primarily write reviews, Gothic analyses, and interviews. Because my main body of work is relatively vast, I've compiled it into a single compendium where I not only list my favorite works, I also summarize them. Check it out, here!
I'm an artist and a writer. If you're interested my work and are curious about illustrated or written commissions, please refer to my website for more information. If you want to contact me about a guest article, please use this contact form or reach out to me on Discord (vanderWaardart#5394)!