January 03, 2020
When I sat down to watch HBO's Chernobyl (2019), I remembered a video from Thunderfoot on YouTube, busting the "science" the miniseries portrays. And while he's not wrong, I was surprised to find how little it mattered, considering how much I enjoyed the show. Granted, I'm not a scientist, I'm a Gothicist; for me, science takes a back seat to constant dread, suspense and horror—a trifecta the show maintains with ease. 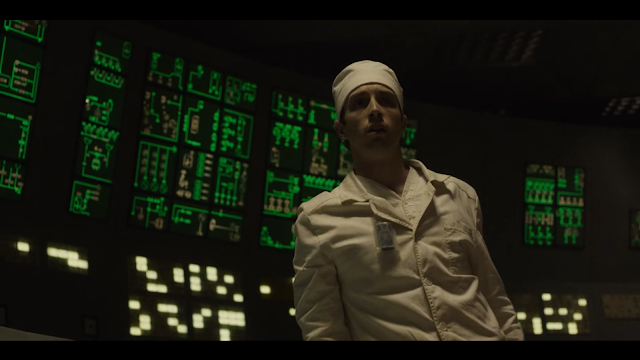 This isn't to say the show is logical. It's not. At times, the contradictions were so blatant they became difficult to ignore. For example, Anatoly Dyatlov, the man responsible for the entire disaster, gets ten years in a labor camp. Yet by the series' own rationale, the radiation from Chernobyl is acutely lethal. Valery Legasov, the show's awkward protagonist, boldly predicts everyone to be dead in a handful of years—not just those on site, but the entire continent(!). Maybe he was just being dramatic. Still, it's funny how wrong the guy is. Legasov hung himself in 1988, being outlived by Dyatlov, who died in 1995. Worse (for him), the total number of casualties directly attributed to the explosion and subsequent radiation poisoning tallies at a whopping sixty. The long-term effects at large reach higher projections, of course, but these are hardly writ in stone.

I digress. History matters not, here. What matters is how seriously the cast and crew present their threat, and boy do they ever. When the doctors say the radioactive victims are not safe to be around, they really mean it. This fact is woefully undermined by the workers themselves never getting sick. But it still doesn't matter because everyone is so grim. When you see an unhappy plant worker falling apart in their hands, it plays out like a zombie film.

This is a show that deals in absolutes—of impending, ceaseless doom. The victims rot, their symptoms accelerated and overblown; graphite is radioactive enough to burn the skin off a man's hand through his protective glove (without damaging the glove). Any exposure to such a volatile source would probably be enough to kill someone outright. For me it doesn't matter, though; it's the thought—of immediate danger relative to an awesome power—that counts. That's what the Gothic is all about. 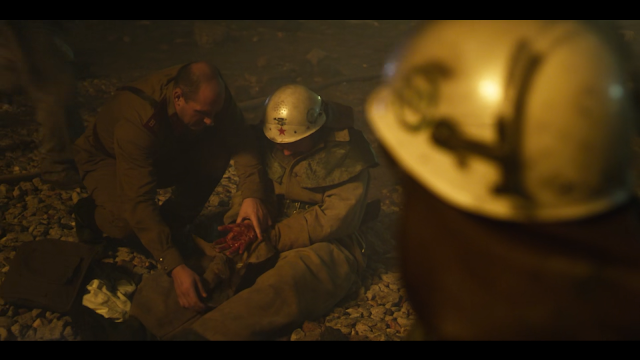 Of course, there is a real disease called Acute Radiation Syndrome, aka "radiation poisoning." However, the symptoms would not be so showy or immediate as they are in Chernobyl. Even Louis Slotin did not immediately die after being exposed to a lethal dose: 1000 rads (absorbed radiation dose). Anything above 600 rads is almost always fatal, "leading to death within months." Slotin took nine days to die; Dyatlov took ten years after being exposed to 390 rem (a unit of measurement comparable to rads). Neither man's body "decomposed" the way the victims' bodies do in Chernobyl, and even with 300+ rem having a 50% mortality rate, Dyatlov long surpassed Legasov's moribund predictions.

More curious still, the exposure of the irradiated is treated like a contagion, a disease to catch. None of the victims are allowed to be touched, becoming objects of fear in and of themselves. While radiation doesn't spread from victim to victim, the show embodies superstitions about radiation. These remain to this day even if, in the show, they are from a scientific standpoint highly anachronistic. "Tell the truth," Legasov is told. Yet, the "truth" in Chernobyl is bedridden with boogeymen, nightmares and total ignorance.

The whole ordeal feels less like reality and more like a nuclear physicist's worst nightmare. Nightmares generally take bits of reality and merge them with chaos. In this respect, Chernobyl is a real place and some of the events actually occurred; likewise, HBO's verisimilitude lends an element of realism to what would otherwise be a retro-future straight out of Alien (the control room mirrors the walls of the M.U.T.H.U.R. chamber from that movie). But the likes of Stalker (1979) were filmed in the ruins of de-Stalinized Russia. They simply had to point a camera and shoot. 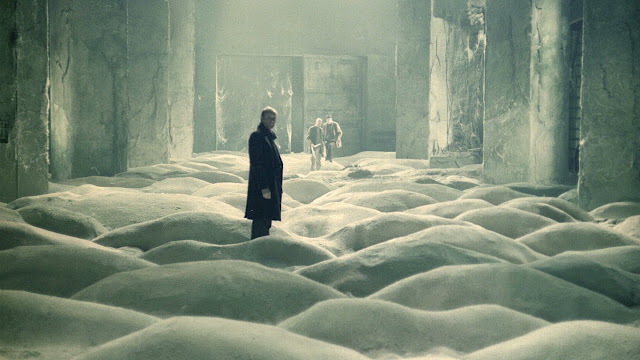 A similar effect occurs in Chernobyl (with the help of visual effects, in this case). The area around the exposed core is basically a death zone. To be honest, it reminded me of Roadside Picnic (1972). Both stories feature invisible dangers; those in Chernobyl are a permanence of total, leeching death, instead of weird alien traps. The very ground can kill you, or the air. Everything is poison—the sort you cannot taste, hear, see or touch. Like Picnic, the danger site in Chernobyl is forbidden. However, it's also claustrophobic, along with a sense of "old death" and decay built up over time: the history of those who died at Chernobyl before the meltdown. The very ground is soaked red with blood.

Another element to Chernobyl I enjoyed very much was the treatment of the catalyst. What made the reactor explode? You think this would be hard to avoid explaining right off the bat, let alone refusing to show the blast until the very end. But this is exactly the show does. The explosion is effectively the Tremendous Mystery behind all of the gloom and doom. Yet, the show's makers hide as much as possible for as long as possible, despite how catastrophic the initial incident is. The destroyed core isn't revealed overhead, but through the eyes of men who must look at it from various parts of the plant. The physical limitations make sense, with some only seeing bits of graphite, which they then must try and puzzle out: How does a RBMK reactor explode?

Dyatlov himself asks partway through episode three, "How do I even know it exploded?" To be fair, he hadn't see the damaged building and the photographs were aerial. Furthermore, there was no way to tell from the control room if the core had exploded; someone had to come in and tell him, and even then they had to confirm it with their own eyes. All he had to do was read the redacted guides provided by the State, which left out the system's fatal flaw that made a catastrophic failure possible. So, in his mind, it wasn't possible 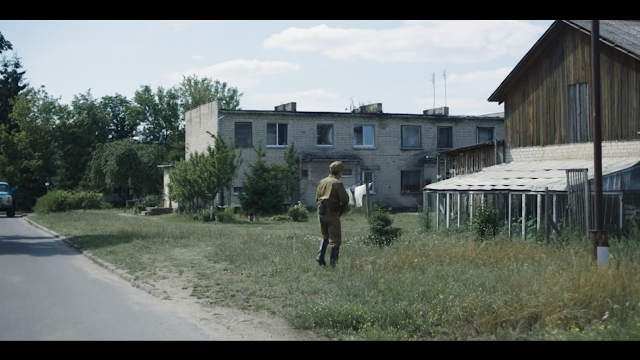 Another jewel in the production is the treatment of the radiated land around the reactor. But I couldn't tell if this was historically accurate or not, and had to wonder if these policies were used by the State to keep people in line. The pacing is brutally slow, with entire segments devoted to an old milkmaid's cow being shot, or a greenhorn being conscripted to shoot radioactive animals—a premise straight out of Shadow of Chernobyl (2007). There's plenty of wide, establishing shots of a derelict town. Cameras slow-zoom on the blood in the grass, or the back of the greenhorn's head as he drinks from a canteen. Dirge-like music plays all throughout.

The music in the show is absolutely perfect, from beginning to end. It doesn't always draw attention to itself, and sometimes fades into the background; but it's always there, and it stays with you afterwards. It lingers. Be they man or animal, all of the radioactive casualties are dumped into the ground and covered in concrete. The last thing I remembered wasn't the sight of the pouring stone, but the cacophony of the electronic instruments. At times they reminded me of didgeridoos or Tibetan death chants.

Chernobyl stresses humanity's sacrifice in the face of catastrophe. One of my favorite scenes involved an attempt to clear a rooftop of radioactive graphite—a task for which every group of men would only have three minutes to complete before receiving a fatal dose (even with protective gear on). "These are the most important 90 seconds of your lives," the General explains. The tension in this scene reminds me of The Hurt Locker. The bomb disposal in that movie is bogus, so it works on suspense instead. Chernobyl uses a similar kind of fiction to create it's own tension—a poor move for a documentary, but Chernobyl isn't a documentary; it's a drama, and the liberties at work are ultimately to its benefit. 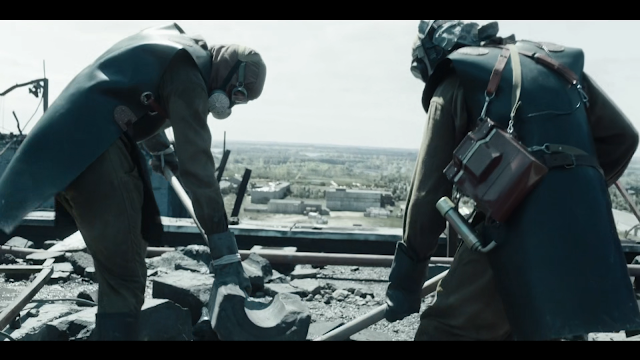 Another wonderful aspect to the roof scene (and most of the show) is how self-contained it is. In this damned sphere, an invisible monster hides where men should not look but do. But you always know it's there, or feel like it is. That's the mark of good horror, and Chernobyl hits it out of the park. Some of the messages about "telling the truth" get lost in the muddy water, but there was less of that than I had expected going in.

I certainly wouldn't treat the show as education, but it does make for good drama and exceptional horror. And the subterfuge and misdirection of the Russian state was very real. Let's not forget that. So if there are feelings of dread through ignorance, it's at least partially a display of seeing the world through Soviet eyes. Then again, I found it equally odd how some of the predictions were attitudes about radiation, and that these could have been so wrong from the good guys' perspective. You think they'd have known better, but their attitudes seemed equally guided by faulty science. 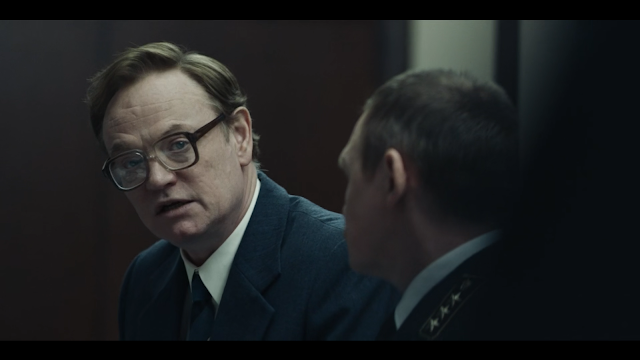 For example, listening to Legasov lecture about "bullets" and Uranium 235 annoyed me to no end; not once did he mention half-lives, or the fact that radioactive materials with longer half-lives have exponentially smaller radioactive emission rates. The higher the output, the shorter the half-life by orders of magnitude. And the melting core would never had produced a thermonuclear explosion! Reactions like that don't happen by accident. It would have made another steam explosion, but why let a little hard science get in the way of a good Trolley Problem and big speeches about saving the world?