January 10, 2020
Before I even saw the show itself, The Mandalorian (2019) grabbed me with its trailer: A tall, silent man walks into a space-saloon, sits down, and is confronted by three lowlife scoundrels. They size him up; he ostensibly ignores them. A fight breaks out, resulting in him trouncing the three of them, including an elaborate stunt from the hero and that ultimate cuts the final baddie in half with the saloon door. All of this could have transpired with modern editing and special effects techniques, but it seemed more like it was shot forty-odd years ago. 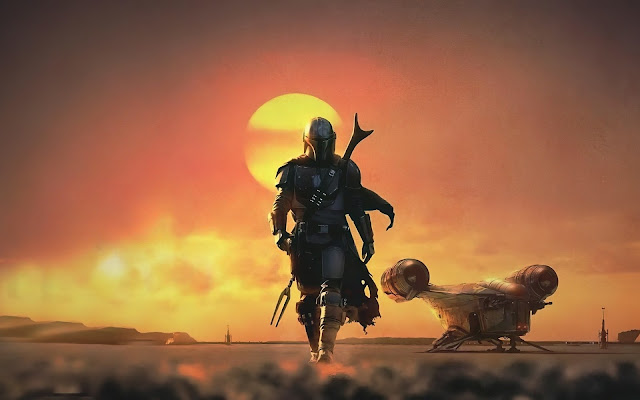 That's kind of the point, and a large part of the show's appeal. Not only is it set in the past (of the Star Wars universe); it adopts older conventions and filming techniques, albeit with a larger budget and modern technologies. There's something to be said about the dangers of emulation, especially when going for a particular, "retro-future" look. But if the student studies the master closely enough, it's possible, I think, to recreate what came before in a way that pays homage without feeling utterly rote.

And moving forward, that's what The Madalorian succeeds in doing. Its photography is crisp and clear in ways even the restored footage from the originals could not hope to match. But there are numerous scenes that step backward into the past: masks, props, miniatures, rotoscoping—all the necessities of the 1970s. These are carefully revisited as a kind of exhibit that breathes life into the story. So does the music; the score by Ludwig Goransson is incredibly effective, sounding a bit like a cross between Bill Conti and Ennio Morricone. It's neither over- nor underused, placed at just the right moments. 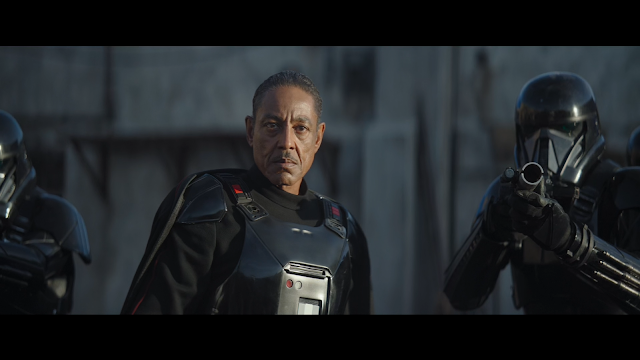 The first episode amounts to a spaghetti Western. After our aforementioned, nameless hero—I'll call him Blondie—makes short work of the bar goons, he makes off with his quarry: a shirking debtor. The hero says little, and his "guest" speaks much. The latter acts shifty, snooping around his captor's ship as if trying to buy time to escape. Instead, he stumbles upon a hidden cache of other prisoners; frozen in carbonite, their screaming faces inform his own as Blondie pounces on him, freezing the debtor in turn. It's a nice opening and things only go up from there.

Next, Blondie goes to a desert town not unlike Mos Eisley. A collector named Greef (a bad pun, perhaps?) meets him at the local bar and trades the bounty for cash. They pinch pennies, until Greef offers Blondie a Special Job. It's offered by "Imps" (the remnants of the Empire from that epoch). Blondie's skeptical, but money talks so he takes the job. Eventually he's sitting before the recruiter, a cold, mechanical man simply called the Client who offers Blondie more money than he's seen in a long while. No haggling. Just cold, hard cash (and money stolen from Blondie's own people, no less).

Blondie takes the job, and finds himself on yet another desert planet, aided by a local called Kuill who teaches him to ride the indigenous fauna. Apparently these critters are "needed" to cross the plains and find the target, but honestly I think it's just an excuse to cram in as many Western tropes as they can into the episode. No that I minded; they swing for the fences, but they also get it right—an outcome I couldn't be happier with. 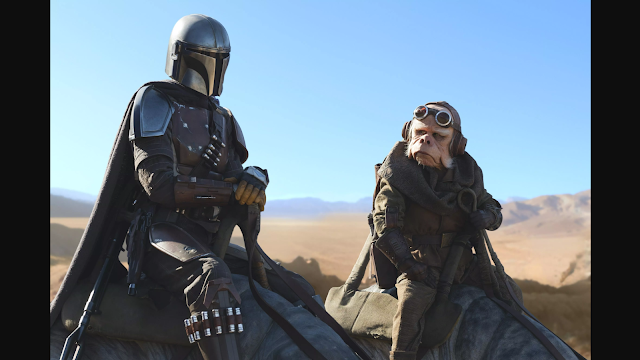 Blondie arrives at his destination, a military fort straight out of The Alamo (1960). Lying prone on a sandstone cliff, he uses his rifle scope to recon. It's crawling with hostiles—well-armed hostiles. Before he can attack, an IG-11 hunter droid appears to collect Blondie's bounty! With no choice but to simultaneously engage, Blondie descends into the fray, parlaying with the homicidal droid as both of them try to stay alive.

After a good deal of well-plotted action and laughs, the love letter to Sam Peckinpah ends, only to have both hunters standing over a crib. Inside is a little green alien—a baby, to be precise: It's Yoda! The droid insists the child must die, so Blondie kills him (with some excellent editing to confuse the viewer, if only for a few precious seconds). Baby Yoda reaches towards Blondie who responds in kind and the episode ends.

The rest of the show is effectively Blondie doing his best to figure out what to do with the child. It's clear the Imps want Yoda dead, and Blondie was orphaned by Imps himself. So, the hardened bounty hunter decides to renege on his one-time employer's agreement (not at first; there has a be a little suspense, of course). This involves a healthy shoot-out, and Blondie makes off with the emerald babe in tow.

From there, the show begins in earnest. If I'm being honest, much of it is formulaic and episodic in a closed sense (visit planet; save planet; never return). Not that this is problematic; but I could spot the pattern of the hero becoming a recruiter of odd friends to aid him on his Big Quest. Not so different than Conan the Barbarian (1982), The Pirates of Dark Water (1991) or Mandy (2018). Sure, Blondie does his thing, but I found myself having fun, anyways; it's stock, but good stock—with enough thrills and action to make me ease into things.

However, the last two episodes kick off much more fully. Why? Because the gang's all here! We know who everyone is, and they're been through enough together to have a sense of camaraderie. And here is where things really get fun. Having double-crossed Blondie earlier, Greef decides to offer the bounty hunter a chance to square things away. It's a bit suss, but the Imps won't stop enough the client is killed. So, to protect Yoda, Blondie goes in, but not without a little help from Cara, an old rebel; Kuill, who also the refurbished the IG-11 droid to be a nurse instead of a hunter; and of course, baby Yoda himself.

The part with IG-11 is a bit T2 (1991), and it's good fun. Cara bonds with Blondie, and Kuill suffers a sad end: death by storm troopers. Until this happens, the three amigos—Blondie, Greef and Cara—meet the Client in a bar. The Client speaks to his boss (surprise, surprise), standing smugly on the counter as a blue hologram. There's a lot of troopers, but before any of them can do anything the man on the hologram disappears in a hail of gunfire. The Client is killed, as are the troopers, leaving the gang stranded behind a row of overturned tables. There's a row of death troopers outside (they don't miss), backed by a platoon of the regulars. 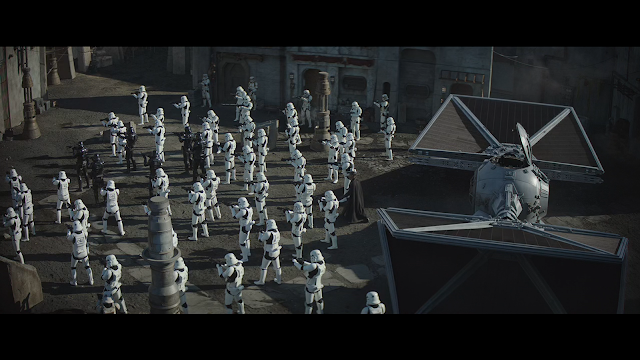 Then, a tie-fighter lands, and none other than Giancarlo Esposito emerges, smartly dressed with his hair slicked back. He's the man from the hologram, the big cheese. It's strange to hear him without the Cuban accent, but he's no less menacing. For a character than emerges at the end of the show, he absolutely steals it. Plus, the tie-fighter he sports is a marvel, brought to life through miniatures, visual effects, and full-scale models(!). It's absolutely beautiful. In front of the saloon, he reads the gang the riot act, negotiating only because Yoda is not yet in his possession. It doesn't mean things are going to be any easier for our heroes, but they do have some time to try and escape.

Begin episode eight. The whole episode is great, but I'll try and list some of the best bits: the storm trooper scene before IG-11; listening to Moff Gideon explain the benefits of the high-powered laser while also reminding the heroes that he has dirt on all of them; the way the death troopers handle themselves against Blondie and the rest; Gideon besting Blondie despite Blondie having the Gatling gun (usually a trump-card in Westerns); the IG-11's Terminator argument ("I'm not sad." "Yes you are."); the tie-fighter dogfight and subsequent Rocketeer (1991) bit. It's the bit of Star Wars I've seen since before the original trilogy "remaster." 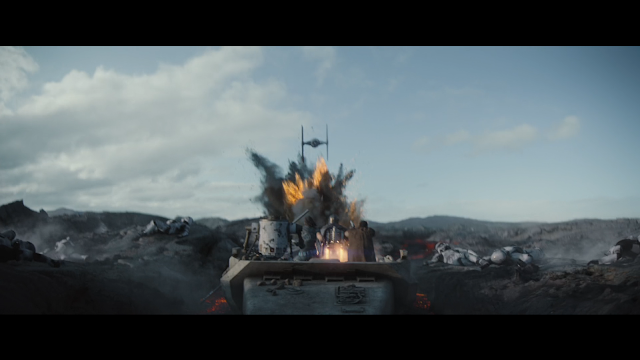 And that's what makes the show work as well as it does: bookends. These are stellar, and the episodes in between are fun (even if some of them feel self-contained—take episode six, for example). Behind his helmet, Blondie's Pedro Pascal is straight and effective, an excellent foil to the show's surprising amount of drama and humor. But the real star is the production, the style, the score. All of this comes together as a real, gritty make-believe—in the spirit of the original, but in the style of the Western instead of televised serials a la Flash Gordon (1936). I should note that the latter would have also been inspired by the Western, but Lucas took his version in the direction of a space fantasy modeled after the Heroic Quest. So the variation is refreshing this time around, but not so far removed as to be undeserving of the name Star Wars.

Even at its weakest moments, this show feels like the first legitimate live-action material for me since the original trilogy. What the prequels and the sequels lack is either energy or cohesion, as well as smart writing. The Mandalorian has all of the above.