Tarantino's plot, in The Hateful Eight (2015), hinges around a basic idea: the persons at Minnie's aren't who they say they are. Much like Sweet Dave's bitter coffee, the issue, if you want to call it one, is how this unpleasant secret is only brought to our attention, long after it matters. As a result, it has less to do with how those perfidious individuals actually appear our eyes, in the moment, and more to do with the bounty hunters themselves being downright jumpy for reasons known only to them. I didn't share their jumpiness, because Tarantino wouldn't let me in on whatever was eating them. Nor could I take John and the Major at their word; they were just as rotten and double-crossing as the bandits. Instead, their shenanigans only add up after Tarantino breaks the fourth wall, or devotes an entire chapter to corroborate what the Major had already declared to be true. 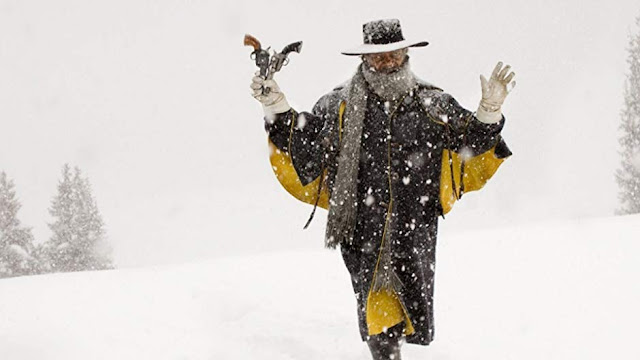 The chapter-in-question is the one Tarantino plays after the Major is shot: Chapter Five. On one hand, this kind of overblown exposition shouldn't even be required, provided Tarantino was actually interested in following some basic tenants of restraint and reveal (at certain moments, he refuses to tip his hand at all. Other times, he tips it so far a part of me wishes he hadn't). Conversely I relished the gratuitous violence on display during the butchery of the Minnie household, even if the movie wasn't exactly building up to it. It explodes, but hardly with the same surge of power seen during the basement massacre, in Inglorious Basterds (2009). Instead, by the time we're shown it, it's effectively an end note—one that contributes little if anything the climax that's currently unfolding on-screen, with the Major and Chris Mannix (the unlikely "Johnny Reb" hero) squaring off against the dwindling infiltrators.

The point is, Tarantino could have left out the slaughter entirely and the movie wouldn't have suffered one jot. Instead, he leaves it in, the aim being to distract us from how unrealistic the premise is, at this stage. Clearly the heroes' only advantage was staying one step ahead of a larger, patient host. With the Major shot, Mannix, also wounded, is a sitting duck. So Tarantino buys time by showing us a great number of irrelevant victims with no real function other than to be brutally murdered in a scene that goes largely without saying. We don't know any of the victims by sight, and only two by name. You'd think the damning bloodstain on the chair would have done the trick, all on its own (a concept that Carpenter himself wasn't afraid to utilise, in order to keep us on edge).

But the Major and Mannix have to be teleported into an advantageous position, again. To do so requires both the passage of time, and a wild commotion. So Tarantino distracts the viewer with a long scene involving lots of cool violence that ties everything in a neat bow. Here, the hope is twofold: that they'll forget about how absurd it is to have the heroes suddenly in the lead, again; and we'll suddenly view Chris and the Major as the heroes. The problem is, they're not heroic at all; they're self-serving and brutal. There's no way to separate them from the bandits, in terms of violence or ruthlessness. Not that I would care, except for the laboriously slow and deliberate shots of the Major's face when he is in danger. These shamelessly try to invoke sympathy when he thinks he's going to die; the sad music plays and his eyes widen like a puppy's. 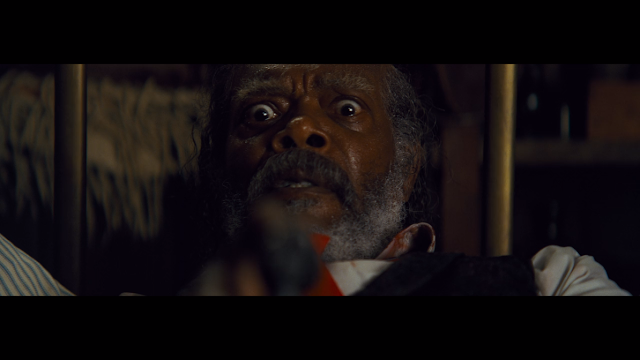 Please. The major is a murderous bastard, through and through. At this point, I felt the movie wanted me to like him or side with him, but why is he the good guy and Daisy a "diabolical bitch," exactly? With the Major, we actually know his crimes, and there's little honest or likeable about him; he demonstrates quite aptly that he will not only lie, cheat and steal, but also murder (or rape) anyone who crosses him. Daisy is ruthless and rugged, but how is she different than the Major apart from their sex and race? Him calling her diabolical is essentially the pot calling the kettle black, for lack of a better term.

True, the hanging sentence at the end effectively solidifies each as robber and cop. Apart from that, little separates them. I wouldn't even have cared except for the flagrant abuse, by Tarantino—of the fabulous music and the movie's run time, to make a case that ultimately falls flat on its face. We're not here to like these characters; it's not the suspense or good versus evil. It's to see the blood splatter in antiquated cinematic formats, just because the director can. As far as that goes, I care as much about The Hateful Eight being shot in Ultra Panavision 70mm, as I did Forbidden Planet (1956) being shot in Eastmancolor and CinemaScope. Not one bit. At least in Inglorious Basterds, the photographic nerdiness fuelled the plot in a clever way with the nitrate canisters. In The Hateful Eight, Tarantino just plasters "filmed in Ultra Panavision 70mm" on his posters and credits sequence like it's supposed to mean something to anyone other than himself, Wes Anderson, or photography majors. It's annoyingly self-indulgent. 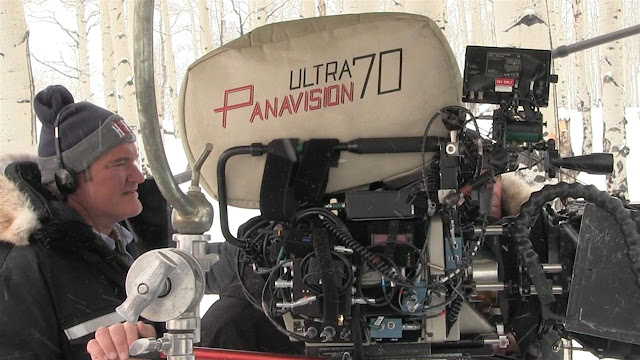 With The Hateful Eight, Tarantino did this time around what he always does: make a Tarantino movie. It's not exactly Bone Tomahawk (another splendid, latter-day Western starring Kurt Russell that actually feels like a horror movie). It's not even like From Dusk Till Dawn (1996), which changes gears halfway through. The horror nods are here in spades, but strangely contribute very little to the atmosphere, or lack thereof. The closest moments are when Morricone's "Bestiality" picks up and suddenly the geek show starts. It's raucous good fun, but would have been more enjoyable if we cared about the hero (one of my favorite aspects to The Thing [1982] is watching a hero I actually side with). The rest is largely a Spaghetti Western built from horror bricks, but largely uninterested in horror at all, save for the splatter. Again, I laughed reliably at the jokes; the acting, dialogue, and characters were all splendid. It's just not horror.


No, it's not horror even though many of the scenes in The Hateful Eight play out much in the same fashion as they did in The Thing. In Carpenter's movie, there is one interrogation scene. In Tarantino's, there is an entire gauntlet of them—foreshadowed in the wagon, as the sheriff and the two bounty hunters bicker, and then carried out one after another inside the stopover. The Major lines the men up against the wall and then chooses whoever he thinks is safe. So does MacReady with Windows.

At the end, Chris and Daisy have their own duel of words. It's pretty fun to watch, apart from the Major's nonstop bellyaching. This, I gather, was to emphasize their role reversal when dealing with the same overarching threat: Jennifer Jason Leigh, as Daisy. She makes for a convincing villain—playful and shrewd, even when spewing bloody spittle in all directions. For much of the film, she's an honest-to-God violence magnet, always covered in blood (though not always her own). When she is dead, Chris and the Major are left to die in the cold, much like MacReady and Childs, but minus the mutual suspicion that either man is untrustworthy. Instead, both are equally bad. Meanwhile, Daisy is treated like a witch, violently hacking off her jailer's arm while the Major sweats bullets.

It's not even a question so much of them being good and she, bad. They're all bad; she's simply meant to be worse. This is where the movie kind of loses me. Everyone was immoral, in The Wild Bunch (1969). They're all criminals, no doubt about that. However, when the evil general kills Angel, I felt bad for Angel because Pike Bishop and the others have come to see him as one of their own; despite their coarser selves, they have a soft spot for the pretty rogue (and Angel is a rogue, having earlier shot his childhood crush in a fit of jealous rage). There's some sense of camaraderie amid the mayhem, because the mayhem revolves around it, as something that's built up over the course of the film.

The same is not true, in The Hateful Eight. These men actively despise one another for nearly the whole runtime. The closest they come to friendship is tentatively watching each other's backs when surrounded by cutthroats. It's a poor excuse for teamwork when the single wholly cooperative deed they do is hang a bandit leader from the rafters while lying in Minnie's bed, soaked in blood. Indeed, the only reason they're working together at all is because they're bleeding out and walled up in a stopover with no place to go. It would have resonated more with me had both members been likeable. Neither struck a chord, and their relationship was largely cacophonous. 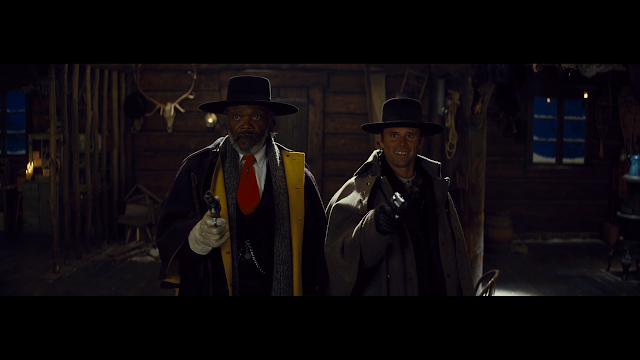 Personally I preferred Carpenter's ambiguity and sympathetic heroes, but as an avid fan of Westerns and horror movies, Tarantino's strange hybrid pastiche still yields a strange parallel charm. Don't watch The Hateful Eight expecting much suspense, or likeness to the Carpenter classic; it's an imperfect Tarantino imitation, replete with a swirl of nods that add up to a knotty mass of faces, limbs and violence. And all the while, it chatters on and on. So enjoy it for those reasons. See it as a Tarantino movie. Yes, it's undeniably flawed, but highly enjoyable for unexpected reasons that have little to do with horror on its own. Alongside the stellar visuals, acting and music, there's definitely something to recommend, here. I'm just not sure what it is.