"The Eighth film by Quentin Tarantino" is a hybrid of sorts, but a curious one. At a glance, it might seem like a Western and a horror film rolled into one. Certainly there are plenty of nods (some subtle, some not) to John Carpenter's older work, The Thing (1982). All the same, this is very much a Tarantino project. His typical treatment of violence and dialogue are well in place, here, but so is the off-beat humor. A little restraint might have helped solidify the tension, but let it never be said that Tarantino's works were singular. If anything, he's a man who tries too much, all at once. 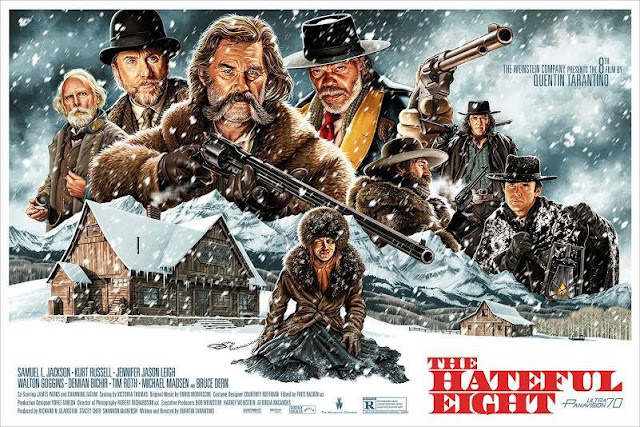 Sometimes, it works, but not always how you'd expect (or want). It certainly did, in Inglorious Basterds (2009). There, the zany quality was meant to be absurd. Part-hilarious, part-horrible, it still felt like something that came together by virtue of the individual pieces assembled into a strange, off-kilter whole; it wasn't trying to be anything other than its own strange self. Make no mistake, The Hateful Eight also tries (and succeeds) to be its own movie. The problem is not so much the movie, itself, but the work it's attached to. The Inglorious Bastards (1978) is an actual movie, but an obscure one. The Thing, on the other hand, is an absolute classic, but one of a particular genre: horror. No shortage of nods and references are made to it by Tarantino. Even so, his work couldn't be more different than Carpenter's if he tried, and something tells me he did. Part of me doesn't mind the disparate relationship. Horror movies, as a genre, are diaphanously self-referential; they simply enjoy referencing older works. Whatever parts being recycled can have vastly different effects depending on how they're actually used. Accordingly a film can be a blatant homage, or a horror exercise in its own right. Tarantino's project is more the former, paying tribute to a completely different movie by having many of the events on-screen feeling note-for-note identical, but played in different styles, on different instruments.

Laughs and oddball moments are not off-limits in horror movies, either. However, short of horror comedies, they generally work in tandem with tension and usually are secondary to it. In The Hateful Eight, John Ruth declares "someone in this group isn't who he says he is." It's a good reference, the reason being that John Ruth's aforementioned line isn't simply an explanation to the audience; it's also a nod to another movie, delivered by an actor who starred in the parent film. In part, I enjoyed the reference because The Thing  is a classic horror movie, famous not for its laughs, but its consistent tension, paranoia and bombastic special effects. At the same time, Kurt Russell saying his own line cleverly evokes a younger version of himself—not as the ageing bounty hunter, but the shrewd relatively-unstoppable hero. Here, Tarantino evokes an older movie to toy with our expectations, concerning his own characters. It begs the question, is John Ruth unstoppable like MacReady was?

All this being said, it's quite one thing to have Kurt spell things out for us. It's entirely another if the director lets the audience arrive at this conclusion, themselves. In other words, we should partially form John's conclusion for him. The problem is, had John not opened his mouth, there's nothing more (or less) suspicious about the tenants than the new arrivals. The boastful, outspoken dialogue feels necessary when it shouldn't have to be. That's the big difference between Carpenter and Tarantino: the characters Carpenter provided actually felt different from one another. We could readily tell MacReady apart from Childs. For all their differences, the titular Hateful Eight seem too much alike for the good of their own movie. Nor is there any atmosphere to announce these discrepancies beneath the surface while everyone is chatting each other up. 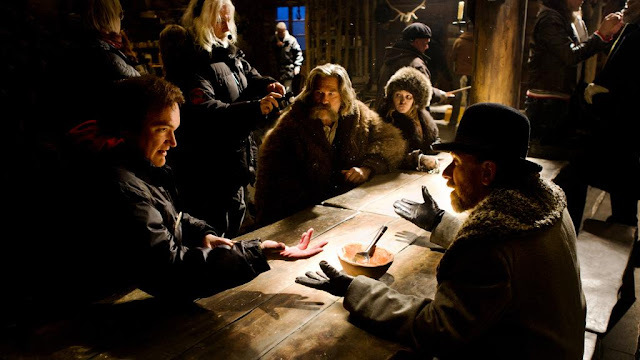 Make no mistake, The Hateful Eight is not a silent movie. It talks nonstop. However, much of what is said by its heroes runs parallel to the primary arc. For example, the new Sheriff of Red Rock, Chris Mannix, doesn't get along with Major Marquis. The Major and John Ruth also parlay in typical Tarantino fashion: loquaciously. Theirs is not the silent duel at the graveyard, in Sergio Leone's The Good, the Bad, and the Ugly (1966); it is a battle of wits, attitude and words. When the dialogue stops (and it rarely if ever does) the music takes over (as usual, Tarantino's choices are eclectic and purposely out-of-place). The best bits are by Ennio Morricone, including a few choice, unused tracks taken straight from The Thing's original score.

The musical robbery and dubious employment of its author—seemingly at gun-point, as, rumor has it, Morricone had sworn off working with Tarantino, after Django Unchained  (2012)—is all very deliberate. Yet, the nonstop references, musical or otherwise, obstruct; they get in the way of allowing us to see past them, in order to actually feel scared or worried. Sometimes I wonder if such expectations, to anticipate fear, actually misses the point; but such expectations cannot be wholly abolished on account of the horror roots Tarantino entertains, if only to subvert according to his own idiosyncratic habits. His considerable movie know-how and zany humor dominate the proceedings, with an interest in the director simply being himself rather than trying to do whatever John Carpenter is known for. When John Ruth barges in and hammers the door shut, the atmosphere is hardly grim, or uncomfortable. Quite the opposite, it's strangely amusing. Instead of feeling on edge, I found myself chuckling. Indeed, there's much chuckling to be had, but is it the appropriate response?

To its credit, the entire movie is tightly structured, and much lurks beneath the tough, opaque surface. The problem is, there's little to actually glean from what is viewed. This sucks much of the fun out actually watching the movie, precisely because we're given little chance to solve or sense anything ourselves. Instead, our role becomes infuriatingly passive: sit and listen, while Tarantino spells everything out—eventually. Onscreen, the stopover seems perfectly alright. To this, John Ruth is privy to something we're not. He and the barmen make small talk, and only John walks away enlightened; we're left in the dark. Likewise, Jackson's Major Marquis squints and looks around him in suspicion; he asks questions that only later on become clear—and this is the root of the problem. The movie is so thoroughly chatty that I almost didn't have time to feel on edge. However, much of what is discussed feels run of the mill. There's little to glean or deduce, ourselves—almost nothing that might make me question or doubt what I'm seeing in front of me. Ironically this backfires when things are spelled out: I felt forced to take the word of the "heroes" whose repute was already in question; I doubted them because I had no opportunity to gather evidence on my own.

Again, the stopover crowd seem wholly ordinary when befriended. Certainly The Thing  made a point of using imitation to lure us in. However, in that movie it was generally betrayed by a sense of poorly-contained menace amongst friendlies. The Hateful Eight  reverses the tactic: well-concealed treachery amongst cordial strangers in the middle of nowhere. Too well, I'm afraid. 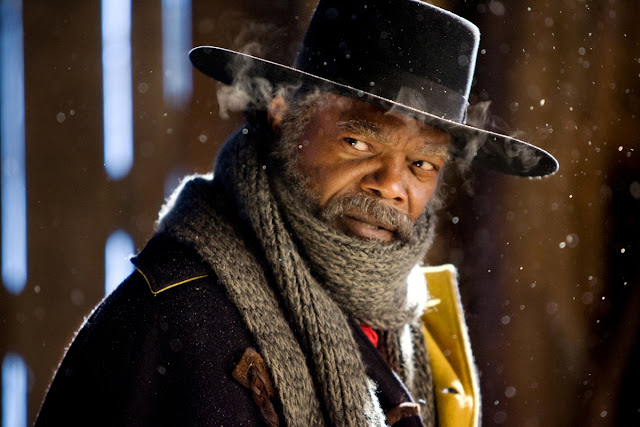 Clearly John and the Major know something we don't. Fair enough. The problem is that each takes a lot of time to reveal what he knows, or does so in a way that feels puzzling to us. The effect is not unlike that of a card game where everyone, including the hero, has fabulous poker-faces. Except when he squints at his enemies, we don't even know they're foes. Nor are we let in on what any of them knows about the other, sitting at the table. Instead, we just feel puzzled by the surly reaction of one; or we conflate it with their professions. When they call another man a cheat and shoot him dead, we have no idea how or why. Lest they let us, to some degree, such affairs aren't conducive to actual suspense.

Another problem is the atmosphere of the scene; it is both innocuous, silly ("No hat day!") and nonchalant ("I'm the hangman in these parts!"). The nonstop banter between the army of characters also distracts us entirely from the immediate danger of the bandits with real rivalries brought in, from outside. Clearly none of the men in the wagon get along. They fight and argue. The men in the stopover do not bicker at all. It should seem strange except it just doesn't. These murderers are well and truly innocuous; there's no drama, in the moment. The danger doesn't announce itself, save when it is spelled out, late in the game, in layman's terms. The problem is, we need to be made partially aware of the threat, when it is present; otherwise, our attention is going to be on those making the most noise. John, the Major and Chris are noisy but hardly suspicious. Instead, they're engaging because they genuinely want to kill each other. The acting is splendid, throughout. There's simply nothing tense about their misgivings—precisely because they're so openly hostile with each other, for reasons that aren't that all that hard to grasp.

In this regard, the actual menace of the duplicitous bandits becomes something of an afterthought (wholly inappropriate, considering how much time is spent with them).  As a horror movie, The Hateful Eight is surprisingly off-base, for me. Sure, when the Major explains himself, it all adds up. The problem is, it only computes in retrospect, within an explanation that is given entirely after the fact. Until then, such on-the-job detective work almost seems pointless, save to reinforce the notion that the "heroic" bounty hunters are a paranoid, backstabbing lot. It goes without saying, yet Tarantino jabbers on and on about it. Such ruthless behavior needs to feel partially understood by us in a way that's sympathetic or it borderlines on cumbersome or mystifying. Worse, it gets in the way of letting us in on other dangers that might have raised the stakes.