A horror movie shouldn't feel the need to spell itself out in order to demonstrate how well it fits together, but this is precisely what The Hateful Eight (2015) does; several times, Tarantino breaks the fourth wall for no other reason I can think of. Granted, his is not a horror film, but the viewer's role here is largely as a passive listener to his tirades, paying homage to a horror film, amongst other things. I can certainly appreciate the level of craft that goes into making such an elaborate jigsaw puzzle, and it is elaborate if simply by virtue of all the individual parts that go into making it. At the same time, one has to feel on edge as these pieces are introduced and gradually-if-ever assembled, and I simply didn't. 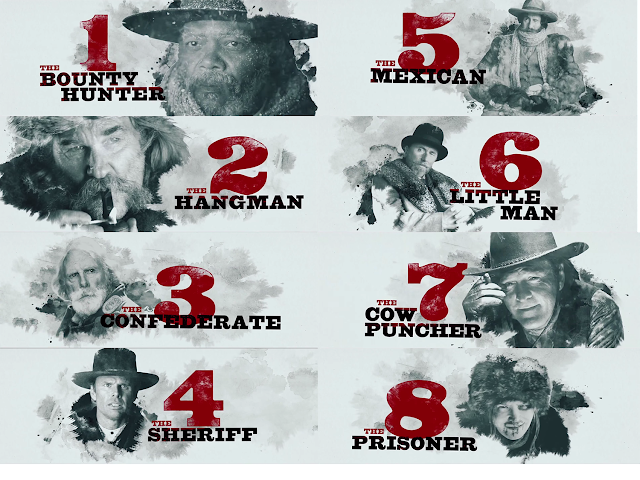 From a horror standpoint, I should have at least been able to entertain the vague feeling of suspicion. Instead, anytime I re-watch The Hateful Eight, I'm constantly entertained, but seldom tense. There's no dread or suspicion relative to the main quarrel. Until we're forced to listen, while the Major and Tarantino spell things out, most our attention is forcefully nudged onto other issues (though mainly racism and unsolved war-time differences). There's a lot going on here that has very little if anything to do with Minnie's doomed stopover and its friendly new tenants. They don't seem oddly friendly at all. In fact, they seem nice in the kind of way that doesn't draw attention to itself (save for the fact that virtually all of them are played by career Tarantino villains).

As a horror fan, I'd ordinarily wish there was less talking going on so the atmosphere could creep into our bones, like the hideous cold, outside. However, the movie's chatty and stubbornly wending nature is also largely why I enjoy it so much. For most of it, I simply didn't know where I was being lead. I expected Carpenter-level thrills, but got rambling verbal jousts on civil war stories. I liked this, if for reasons entirely independent of why I enjoy horror movies. Certainly Tarantino knows a lot about horror movies, but his isn't so much a horror exercise as a exhibition delivered with a squarely Western slant. One potential caveat, here, is Tarantino's experimental nature. He bends conventions to suit his own strange needs. The end result is that much of what is presented in The Hateful Eight feels strangely out of joint. One character hides in the cellar, emerging for a hair's breadth only to have the Major turn him inside out, in Chapter Six. Meanwhile, Minnie and her husband are mentioned constantly beforehand, only to be shown in a single, brutal flashback the Major and company could never have produced themselves, as evidence.

Here, Tarantino eventually reveals all. Until he does, the movie feels strangely opaque. One example that leaps to mind is the coffee. There are two examples of this: one, when John throws it out, and two, when it is poisoned, later. Early on, we're told flatly that it tastes bad, by the outspoken John. However, it's difficult to make the connection as to why that is by the time we're presented with the actual cause (old Sweet Dave makes his coffee bitter). The dots are arguably present, in the movie; they simply don't add up to anything momentous, and chance to do said arithmetic is provider very late into the story.

In Carpenter's movie, The Thing (1982), there are things left around to add up, later, except they are bit more involved in an actual, ongoing dilemma the viewer can be a part of, in the moment. Before Bennings is killed, Windows asks him for the keys. The other man replies, "Get 'em from Garry. I wanna get some stuff outta here." Windows leaves. Upon his return, he finds Bennings under attack and bolts. When he does, we hear the keys hit the floor. Later in the movie, some blood samples are damaged inside a freezer. Evidently the saboteur opened, closed and then locked the freezer, again. Right on cue, Garry sheepishly admits he's got the only key to the freezer. Sure enough, the keys are there on his belt, but he insists that he didn't use it to open the freezer. Here, everyone seems to have forgotten that Windows took the keys from Garry and left them on the floor before running out of the room, earlier. In that span of time, someone had access to keys and used them.

How they returned to Garry isn't clear (see Rob Ager's excellent video on this topic for some theories). The point is, it ultimately doesn't matter how Garry's keys were returned. Carpenter makes us forget by virtue of commotion, in accordance to windows of time that can't be fully explained, by characters who aren't always in the room. Plenty of things happen off-screen—not only out-of-frame, but also in between scenes, that are left to the viewer's imagination, concerning a palpable threat. They unfold in ways that can be inferred, even if never explicitly stated. The audience can join in according to things that continually are going on.

With Tarantino's coffee, there isn't really a point to be made except that Sweet Dave makes it bad. When Minnie says the coffee is bitter, her declaration is too isolated from John bitching about it, in Chapter Two. There's no two-and-two to put together that makes us smirk; it's oddly banal, and both ends of the exchange feel unconnected to anything engaging or momentous. It's not the bodies in the well. The old fart just makes bad coffee, and we only learn this measly tidbit after five chapters! It's not presented as ironic, or as a joke. It just unfolds  onscreen in a straightforward manner. 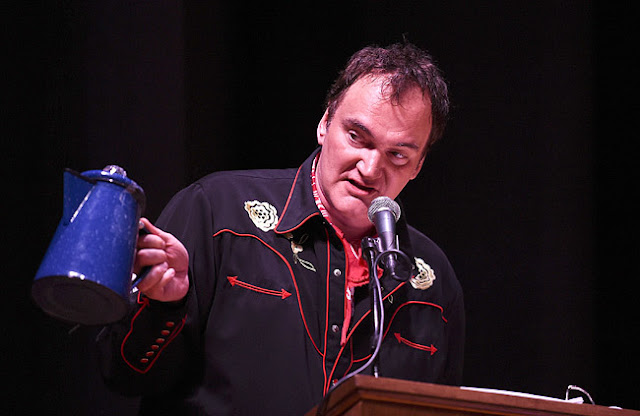 Second, Tarantino flat-out states when the coffee is being poisoned. This is not a vice character smirking at the audience of a Shakespearean play. It is not the chorus of a Greek tragedy. No, it's the author himself deliberately breaking the tension of the scene by spelling out the danger. In my opinion, the scene would have been a lot more fun had Tarantino never opened his mouth, at all. It lends me the impression that he has little interest in suspense or surprise—odd, given the horror movie he decided to model his Western after being known for its heavy paranoia and active suspense. The only way he succeeds is as a pastiche of that older work, using the older parts in ways that Carpenter wouldn't have bothered, for a completely different effect.

Another frustrating thing about Tarantino, in The Hateful Eight, is how he treats anything that is out of frame, in a given scene. When the coffee is poisoned and characters start vomiting blood, our eyes are planted firmly on whatever the camera lens is pointed at. In this case it's John Ruth, who Daisy has in her sights. She blows him away and the Major disarms her. Alright, but what is everyone else doing while all of this is going on? Certainly the spectacle is bloody and glorious, but in retrospect, it doesn't add up—largely because of what Tarantino himself eventually spells out for us: a man called Jody hides in the basement, and a gun is hidden under the table, nearby. It seems like one of the bandits could have furtively produced it, and dealt with the Major during the bloodbath; or, Jody could have popped out of the floor like a jack-in-the-box, guns blazing. Instead, nothing of the kind happens. It's like the men, when off-screen, are suddenly frozen in tableaux, unable to act. Tarantino doesn't reveal what they're doing because he'd be hard-pressed to come up with an explanation that actually allows his narrative to carry out the way that it does.

Another example of this is when the Major is riling up the general, played by veteran character actor Ben Stern ("Yo, Rumsfeld!"). The Major delights in recounting his story of killing the general's son, but not before torturing and humiliating him (one of the movie's stranger moments, and one that Tarantino strangely seems to relish). At first, Chris Mannix sticks up for the old warrior, telling him not to listen. Then, it's like Chris and everyone else just disappear. Suddenly it's just the Major and the general in a series of close-ups. 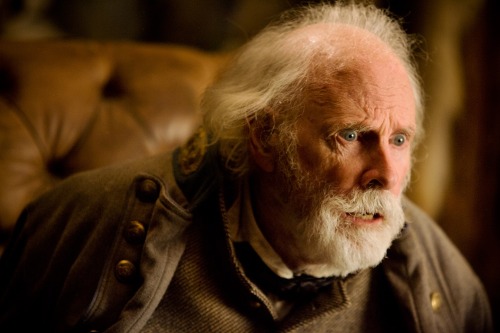 Scenes like these are so myopic, with characters so swept up in their own weird fables, that Jody could have shot the Major through the floorboards, right then and there. One of the rogues could have used the pistol under the table to deal with John Ruth, and that would be that. But again, anything and everything that isn't onscreen is forced to stop to let the war of words to carry on, unabated. Tarantino forces his dialogue to have the floor even when there's no grounds for it, apart from his say-so.

The third offence is when Jody actually does shoot the Major. He drills him square in the nuts. What's odd is, here, is how the bandit captain is revealed to have two six-shooters, but only fires one bullet. Why not fire all twelve and make sure the Major is dead? He doesn't, and the chapter ends with Samuel L. Jackson screaming his head off (at this point, I felt nothing at all for him, and wished that he'd actually shut up). Tarantino switches gears to keep us from wondering too hard about how Chris gets the equally-wounded Major up onto the bed, while being outnumbered, two-to-one (there's Jody in the basement, and three other bandits alive, on the ground floor): Chapter Five. Yes, it spells everything out; it's also didn't need to. At least it looks pretty.