November 27, 2019
November 17th marked the ten-year anniversary of Vulpiano Records, the independent record label launched by Marilyn Roxie. Marilyn has continually promoted a variety of styles—ambient, acoustic and electronic—and has supported independent artists from around the world for over ten years. 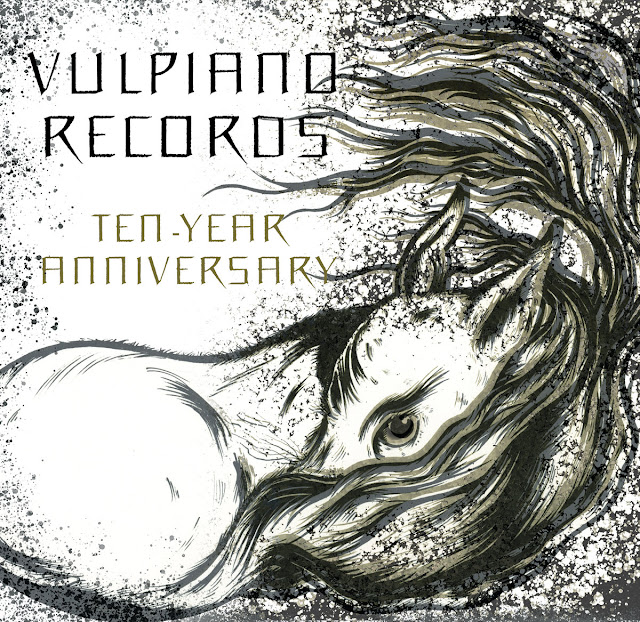 The ten-year anniversary is marked by a special event: a C45 cassette tape with a custom shell, box art, and collectible inside—either a rainbow-foil tarot card, or a collage artist trading card (selected at random). [The quality of each of these components is equally impressive. However, the greatest aspect has to be the music itself.

In terms of quality, this is a very consistent set, with a lot of variety from a wide scope of artists from around the world. Yet, it feels less eclectic and more cohesive, each artist having submitted something truly special that amounts to a highly engrossing and engaging listen. One of the artists themselves, Marilyn has demonstrated an incredible ear for selecting and producing music, and I can't recommend their release enough.]

The analog release is limited to a hundred copies, half of which have already sold. There's still time to make a purchase, though, and all proceeds beyond the cost of production go to Internet Archive. Without them, the label could not exist or promote its music freely online.

The anniversary tape contains fifteen tracks, with another three available digitally on Bandcamp.

1. Natural Snow Buildings - "Charles Thomas Tester":  A series of rising notes usher the listener into a sparkling vista. Frigid and ethereal, a shimmering chorus is bolstered by a deep, repeating piano. These are joined by a second voice layered with static, but no less enchanting. They chant and hum through a storm of metal chimes, their rise and fall marked by intense spikes of volume.

2. Xqui - "Aluminium": A distant echo reverse-fades into half-focus. As if inside a tunnel, the listener walks towards the source, which never quite reveals itself. The swirl of the spectral crowd grows louder and faster, only to retreat at the last moment.

3. Delicasession - "Soar" (SA90 edit):  The listener is greeted by birdsong over a droning keyboard. A second voice—a guitar—stretches, segueing into a clean acoustic line, supported by rising keys, a steady clapper and electronic thump. A warm, rumbling bass line walks under them, greeted by a variety of taps and clicks while the guitar rambles on. A delayed guitar line pans to the right, only adding to the spaciousness this lush track provides. Then, everything stops, save the keyboards, overdubbed by a crackling voice. The second half of the song is announced by a deep, bouncing beat and coarse electronic snare, joined by a synthesizer's buzzing throb and gentle chimes. 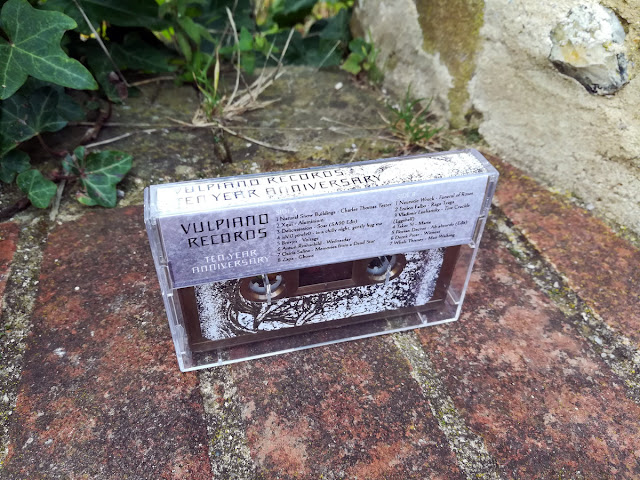 4. ish10 yow1r0 - "in a chilly night, gently hug me":  A short-delayed melody thrums into the firmament, spurred by a frantic clapper, tick and dotted bass line. It runs like an urgent clock, out of time and bleeding bass. A ghostly chorus joins in, moaning softly to the instruments, and by themselves.

5. Brevyn - "Voltage":  Traced by ephemeral keyboards, a warm buzz is met with hopping beats. Part click, part thump, these leap about like live wires. Spectral keys encircle the listener, and the peppy melody plays on. It repeats, and then kicks into full gear, emphasized by bouncing staccato synths. A middle section gives way to an isolated bass drum, busy hi-hat, and saw tooth keys, interspersed with a burbling synth track John Carpenter would be proud of. Things repeat, but Brevyn introduces a rattling snare and electronic twang at the end.

6. Anton Rothschild - "Wednesday":  A guitar cleanly strums, echoing into the static. A thumping kick drum, spacious snare and hearty bass line accompany the singer, waxing lyrical: "Maybe it's the day to run away..." The wistful ruminations momentarily give way to rousing cymbals, before picking up with a piano accompaniment. The mellow solo echoes beautifully. The closing bars soften thoughtfully before strumming into a final chorus. A song for happy memories felt within the rosy hue of a dusky beach.

7. Osiris Saline - "Memories From a Dead Star":  Probably my favorite track name from this release. A gentle, isolated lullaby plucks through a droning curtain. Terse, diaphanous strings thrum throughout, rising for a time only to fade while the organ breathes its last. 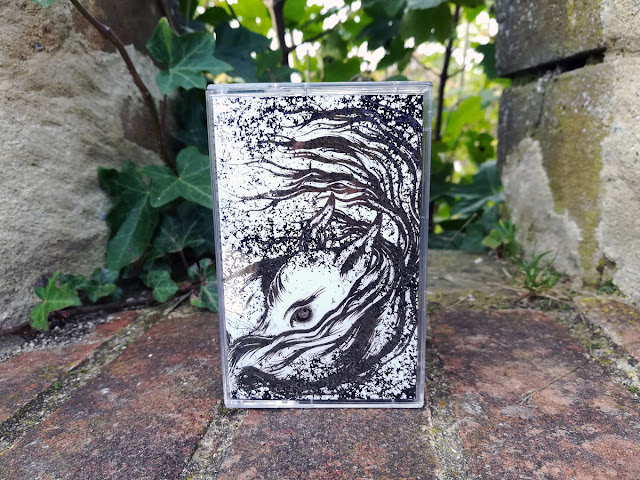 8. Zapa - "Ghosts":  Dense, finger-picked guitars play over a unison vocal track. A twangy melody, tambourines and a rumbling piano color the ballad, lending it a whirlwind air, rhapsodic but subdued. The solo gives away to the hopping shuffle of two vocal tracks, crooning "You soon came back..." And sure enough they do, the instruments picking up again with twice the energy. A third vocalist joins, but faded, until a bending outro brings things to a close.

9. Neurotic Wreck - "Funeral of Roses":  A dense pair of snare and bass drums stomp, the singer slipping between them as the organ begins to play. He drones and whispers, "Blood on the blade, my knife; his petals plucked..." Three pipe organs proceed into the dark, their unbroken march joined by a chatter of electronic noises, scarcely heard.

10. Enrico Falbo - "Raga Tyaga":  An intense shimmer hides a crackling radio-of-a-voice; the person's words try to speak, only to be swept under the deep, metallic drone. Gongs measure infinity. Siren-like strings are wrapped in the wail, beset by chaotic static. The gongs ape the din, eclipsed briefly and ending with a final howl.

11. Vladimir Lucansky - "Tint Crackle (Eggshell)":  As if inside a temple, the sound of masonry (or machines) are greeted by an ethereal chant. Other copies phase in and out, their location palpable but indeterminate. An electronic buzz grows louder, making the lyrical image warp and chatter. A high-pitched signal cuts through, the vocals panning sharply from left to right; a wobbling counterpoint and flashes of noise pepper the air, skipping into a warm buzz. It rises and rises, until the singer is all but gone. Except, it imitates his rhythm, like circuitry underneath, until flickering out like a dying television set. 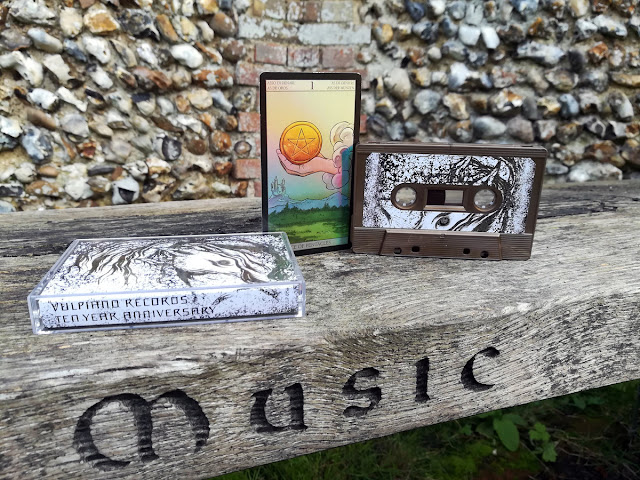 12. Taker 51 - "Marte":  A low frequency dials up, it and the voice that follows all but eclipsed by a louder, pulsing melody. A snare joins in, counting down into a busy bass-and-keyboard duet. Reminiscent of Geddy Lee, these and a reverb-heavy guitar spring into action; as they did, I felt reminded of early-80s Rush. The pulsing keyboards, busy drums and nimble bass exude a contagious energy—one set to a futuristic image, heralded by sparkling lights and chatty computers.

13. Florian Decros - "Ab absurdo" (Edit):  A feverish ticking charges the steady bass beat, joined by electronic toms and a great whoosh. It swells in a minor key until a busy synth melody starts to play. Chilly xylophones punctuate the rush, chiming on either side (the left deeper than the right). A bouncy piano mimics them, followed by a keyboard. I found myself thinking more than once of Giorgio Moroder—the kind of song set to fantasy in the 1980s, with a dance club feel to it. The air rushes by until the keyboards chorus in earnest, driving the melody home. The piano and electronic strings follow suit. They feed into the bridge, set to a busy low-end while a right-panned melody cheerfully intones. The reprieve is brief, and the minor melody returns. A variety of hooks—electronic toms and whining sounds—give the listener breathing room until a second melody joins in, refrained with a joyous piano. The hooks continue, with some welcome percussive changes that add to the beat without losing it. The main melody returns, set to a gong-like bell, salsa-like bongos and rapid tambourine strikes. For all its length, this one flies by.

14. Derek Piotr - "Witness":  Whirls and dial tones are covered by a delayed, lonesome note. Sometimes it stops, and the machines carry on by themselves—until a melancholic chorus begins to intone. The machines respond with a digital chatter, oil-to-water with this human presence: "I can't... I can't" is the reply.

15. Whalt Thisney - "Man Walking":  "A man is walking across the ice..." the vocalist describes, carrying on to a patchwork of electronic noises and somber piano. It ends as it starts, without warning and in the middle of— 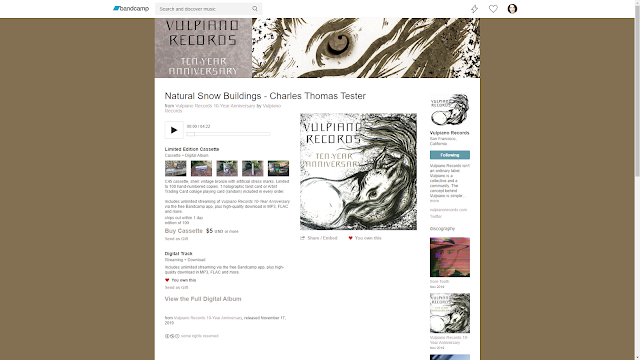 16. Enrico Falbo - "Psychostasis":  A deep kick drum and a timpani pound through metallic strings—some rough, others alluring. The pace of the track is that of a juggernaut: slow and destructive. Several minutes in, a deep synthesizer emerges; never to leave, it’s accented by faded, distorted vocals, and a dirge-like horn that’s ever blowing. The synthesizers expand, meld and shift, while the pounding timpani are accompanied by jangling tambourines. Slowly, the siren returns, harsher than before. The timpani blast triplets, before entering double time. A hissing cymbal joins in, and the chanting vocals reprise themselves. The song rises into a deafening climax, survived by the synthesizers while everything around them implodes in slow-motion.

17. Lately Kind of Yeah - "Chaotic Nothing":  A muted, hazy keyboard plays under a bright, bending counterpoint. A breathy, boyish voice joins in. "...share this with me; have you any choice...?" he hums. The dreamy expostulation sweeps through a staggered series of played keys. A shifting chorus sings, the lead vocals undeterred. The balance shifts back and forth, up and down, left to right; a lilting guitar plucks, the closing lines insisting twice "I can't give back what I tore from you; I'm sorry..." before ending abruptly.

18. Marilyn Roxie - "Indigo":  This sinister, beautiful track consists of a single haunting piano. As the left hand marches through the void, a lonesome, somber melody floats overhead. It repeats into a stabbing crescendo, its plaintiff anthem greeted by a deeper sibling. It resolves, fading with an air of cautious hope.