Scary Stories to Tell in the Dark (2019) review (video script)

November 15, 2019
This is the script for my YouTube audio review of André Øvredal’s Scary Stories to Tell in the Dark (2019). There will be spoilers, including images from the film. 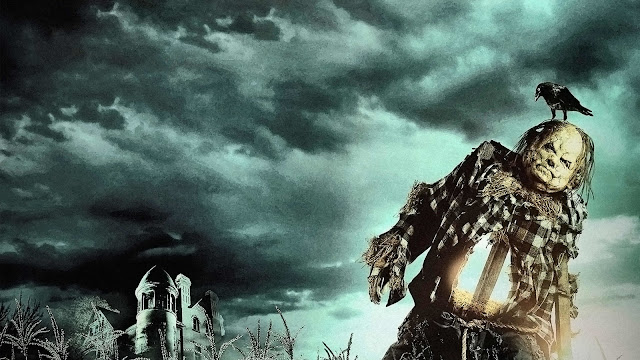 Scary Stories to Tell in the Dark is Øvredal’s first film since directing The Autopsy of Jane Doe (2016). That film was R-rated and featured a good deal of suspense; it hid its monsters as much as it showed them. By comparison, I’d argue that Scary Stories has the superior monsters, but it has no idea how to present them, let alone tell a scary story.

Written by Alvin Schwartz, the original books weren’t effective because of the words; they were effective because of the artwork. Produced by artist Steven Gammell, the illustrations disturbed parents so much the books were banned for years. When publishers tried to restore the books, they removed Gammell’s artwork, replacing it with pictures fans did not like or want. After many years [in 2017], the books were finally re-released with Gammell’s pictures intact.

Gammell has a unique, immediately recognizable style. It’s inky mixture of abstract shapes and misshapen people almost floats off the page—an alarming concept all on its own. They’re good enough by themselves. However, the reason they work in book format owes itself to how scary books are read, in general. I’m sure some people tell a scary story with the lights on, but the inclination to turn the lights off is understandably common; a tenebrous milieu enhances what’s already there. 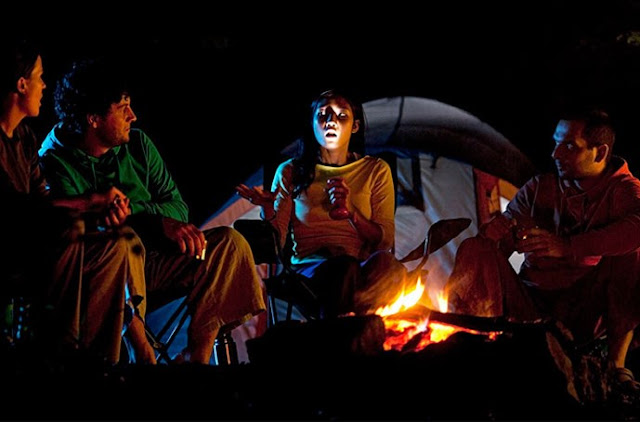 Imagine yourself and some friends sitting around a campfire. You’re out in the woods, isolated, surrounded by darkness; there are night sounds abound, and the campfire (or some other inadequate light source) throws your friends’ faces into stark relief. A generic campfire story is still generic, but under these conditions your imagination has room to work. To the same degree, you’ll imagine more if you’re in a dark room, reading with a desk lamp or a flashlight.

Another aspect of scary stories is how stationery the act of telling them is. Books require stillness, and to a similar extent campfire stories require a focused, immobile audience. Imagine trying to tell a ghost story on a packed subway. Though technically possible, the likelihood of an alert or attentive audience seems remote. Even if everyone on the train had their eyes on you, you’d still have to contend with the shaking car, the sound of the rails, and the swinging hand grips overhead. People would come on and get off the train nonstop. Complete focus would be all but impossible.

Another example would be listening to audio books. Some people do this while driving or cooking. And while I’m sure they give it as much attention as they can, they ultimately have other things to focus on—making sure they don’t crash, or that the curry on the stove doesn’t boil over and make a mess. The less distractions the better. To this, darkness doesn’t simply enhance the mood; it gives you less to focus on by making the book in your hands the center of attention.

Scary Stories fails to understand many of these basic concepts. It isn’t stationary or atmospheric when it tells its stories; it has too many distractions. 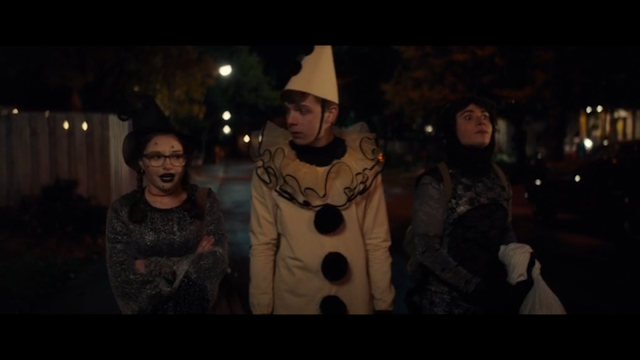 The movie combines Schwartz’ individual stories inside a single, occupied world: 1968, small-town America. The Vietnam war is in full swing and Nixon is running for president. The opening act introduces our heroine, Stella and her friends Auggie and Chuck. They’re a tight-knit bunch, bonded by their shared interest: horror movies. There’s also local bully named Tommy the boys are plotting against. We don’t know for what, and the movie barely has time to explain.

During a series of rushed events involving a revenge plot on Halloween, the gang meets Ramon; with his help, they break into the Bellows’ residence, a haunted house on the edge of town. Once inside, Stella explains how the Bellows had a daughter named Sarah. According to legend, she was so troubled she hung herself, but not before poisoning the town’s water supply.

After a bit of sleuthing Stella and Ramon find a secret door. It leads down to the basement, where they discover Sarah’s book. Auggie mentions how its stories were written in children’s blood, and Chuck tells Stella not to open the book. She doesn’t listen. While the others aren’t looking she reads the fatal line: “Sarah Bellows tell me a story.” Once she’s home, Stella flips through the book, reading the names of Sarah’s short stories (all borrowed from Schwartz’ book). Partway through, the pages become blank. Stella flips backward to find a new story called “Harold.” The ink is still fresh, and red. 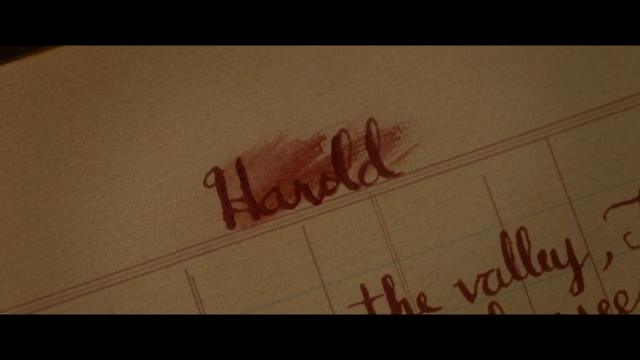 From here on out, the movie gets a lot wrong. Harold is foreshadowed, and exists in the real world; he’s the scarecrow in Tommy’s cornfield. The other monsters aren’t foreshadowed, and don’t exist in the real world. When a fresh story appears in the book, there’s no half-finished illustration to hint at what’s to come. Gammell’s drawings could have been used here, if only partially to put the audience on edge. Instead, there’s only words. Imagine the original books only having words; it would work about as well as it does here. Not very.

After “Harold” concludes, the words begin to write themselves in real time. As they do, Stella and her friends read along. One of them is always separated from the group, and the book always makes this person its target. With the gang divided, there’s always a fair amount of cross-cutting. It’s made to feel frantic, but we have no idea what the danger is. Not only does the book contain no pictures; its stories come from the victims’ childhoods. However, the victims only remember these stories right before they’re attacked. There’s no mention of it beforehand, and no time to prep the audience as a result.

First, Stella tells the victim they are under attack, which spoils the surprise. Second, there’s no suspense because we can’t picture what the attackers look like. When the monsters drop in, it’s always out of the blue. There’s another problem, though: When they appear, it’s in front of the camera, fully-revealed. 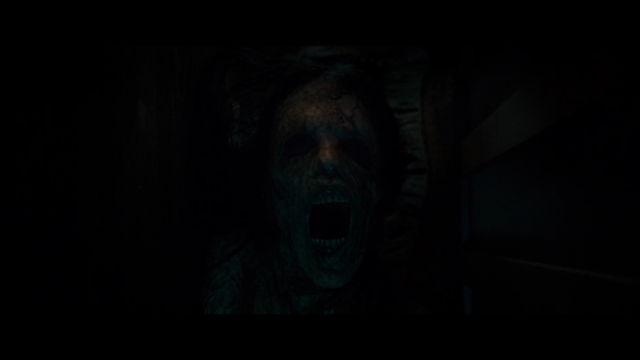 This not only gives away their appearance; it also reveals their visual flaws. The production team clearly worked hard to recreate Gammell’s monsters. The problem isn’t their attention to detail; it’s that they partially relied on digital touch-ups. These mar the image, making the monster look cartoonish at times. It defeats any attempt to bring them to life. The kills also occur on camera. We see Tommy stabbed with a pitchfork, and his slow transformation into a scarecrow. We see Chuckie absorbed into the Pale Girl. Neither is especially impactful, and for the same reasons outlined above; the digital effects ruin the payoff and cheapen the kill.

Another problem is placing the monsters into a three-dimensional world. When Gammell created them, he did so on a flat surface—they could only be viewed from one angle. Imagine Michael Myers viewed from behind. It wouldn’t work because you couldn’t see his scariest feature: the mask. A similar concept applies to Scary Stories. When the Pale Girl is revealed, there’s no mist or darkness. The camera tracks upward, showing her from head to toe. She even has time to wring her hands and smile for the camera. Then, confusingly, they follow up with shots of her walking through the walls, obscured by darkness. 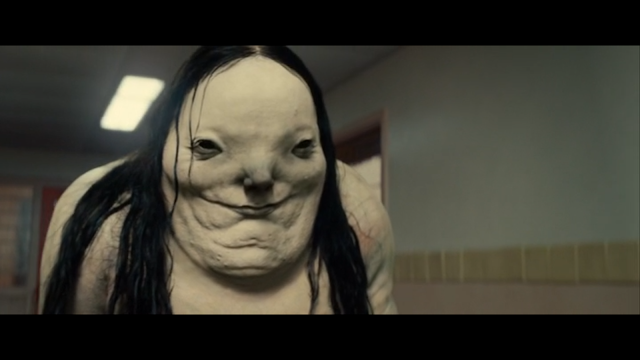 Apart from the monsters, there also is a grander plot, which has the Bellows family being the true culprits of the poisoned water incident. When their daughter Sarah tried to expose them, they tortured her and sealed her away underneath the house. This is teased throughout the movie, until Stella confronts Sarah in her cell. She calls her a monster, stating whatever the Bellows did was on them, but that Sarah’s rage needed to end before she hurt anymore innocent people.

I didn’t care much about the plot, but I did enjoy the 4th dimensional aspects towards the end. Chased by his own monster, Ramon flees to the Bellows house. Stella arrived earlier. For her, the house is brand new; for him, it’s a ruin. As she and Ramon move through its rooms and halls, they occupy the same space but not the same time. Stella occupies the position of Sarah a hundred years prior. She ducks under a table, hiding from the Bellows. In the present, Ramon does the same, avoiding the monster chasing him. When Sarah is captured, Stella's glasses fall from her face. They are new when she loses them; when Ramon finds them in the same spot, they are cracked, dusty and old. 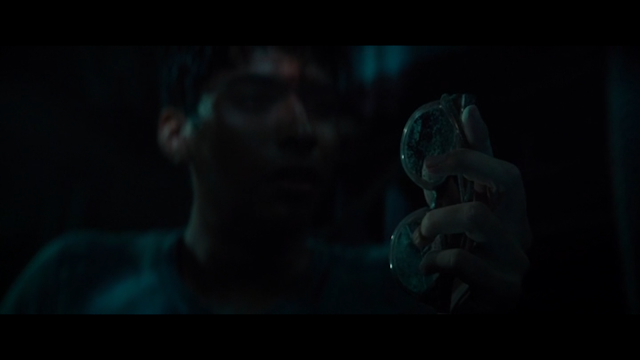 This was a cool sequence, even if it had nothing to do with the books. I only wish the rest of the movie was so inventive. It also would’ve been nice to have an R-rating. It worked for del Toro’s children’s fable, Pan’s Labyrinth (2006), and Øvredal’s Autopsy. Both movies were violent, but also knew how to raise the stakes. They had darkness and stillness, and monsters hidden inside—dangerous ones.