November 08, 2019
When I watched Midsommar (2019), I found myself comparing it to Hereditary (2018). That movie took its time, introducing its characters inside a single location, which then became the the film's main setting. Midsommar, by comparison, rushes the tragedy. I'm not against having an opening accident, one the heroine must retreat from to heal elsewhere. This approach worked in The Descent (2005) because Sarah's woes weren’t so easily escaped; they followed her into the caves. 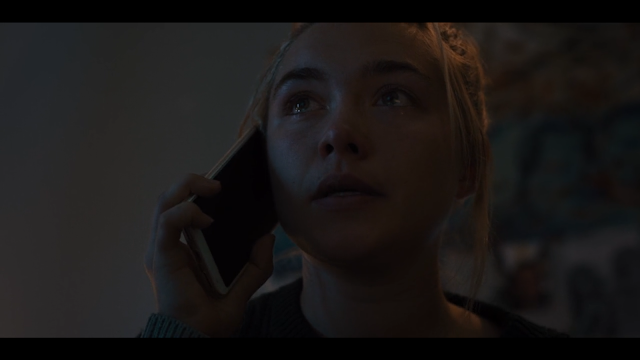 The opening tragedy in Midsommar hardly seems to matter at all. Most of the movie takes place inside a village in Sweden. The deaths that occur at the start involve people we never meet, who die in their sleep. They are never mentioned; we don't know their names. In other words, they’re not the crux of the drama; there is no drama. There are suggestions of drama, but these are rare and frustratingly brief. When the boyfriend chooses the village for his thesis project, his friend—another PhD student—is furious; the dialogue that occurs between them is the best in the film—in part because it felt genuine and substantial, but also because it concerned the Americans and why they had traveled to Sweden; it involved them.

I suddenly felt excited. "Drama!" I thought, feeling engaged. Alas, the angry PhD student is killed soon after, making the scene utterly pointless. What could have become a foil for the rest of the movie is squandered. The boyfriend survives, only to stand around doing nothing. Yes, he talks. However, his affect is so lacking I never wanted to hear what he had to say. Unfortunately Aster puts him in situation after situation where he has to explain himself—to his dubious girlfriend, and to the increasingly skeptical villagers. Watching him try wasn’t only painful, it was boring. 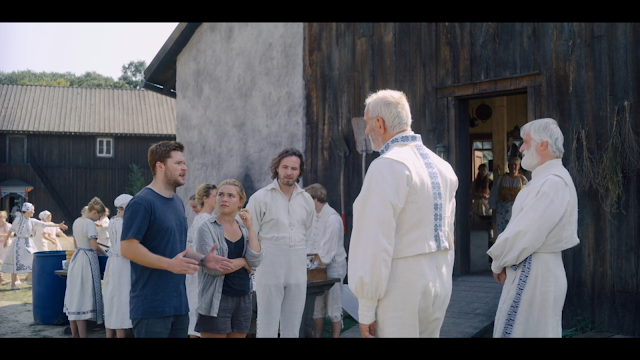 The first half of the film seemed pretty standard. Then, about halfway through, I lost interest. Given the scene that lost me, you wouldn't think so:

An old woman stands over a ledge, high above. She is old, and dressed in blue, regal-looking robes. A group of onlookers, also robed, look up and watch her. She stands there, motionless; dreamy music sets the tranquil mood. Then the music stops; cut to the heroine, whose face twists in horror. When the camera cuts back to the old woman, she has already leapt. She falls several hundred feet before belly-flopping onto a large rock. She does not bounce, and sticks to the stone like clay.

At this point, the tourists are less than pleased. Their panicked voices can be heard, but faintly. The camera doesn't focus on them; it follows a local pair, who gently scoop the dead woman off the rock and drop her onto the sand. Her face is in shambles, her skull a half-completed jigsaw puzzle held together by skin. The camera doesn't linger and the dreamy music resumes. Up above, an old man nears the ledge. After a moment, he calmly leaps off. He plummets, glancing off the stone before hitting the ground. 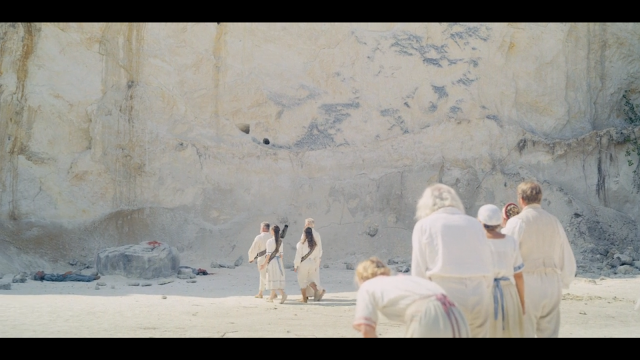 Injured but alive, the old man reels in agony. A younger, burly-looking man comes over and brains him with a giant wooden hammer. A train of teenage girls follow the executioner, who turns around. He passes the tool to the foremost girl, who approaches the corpse with it. She gives the ruined head a solid whack. So does the second girl, and the third. The Americans cry out, off-camera; on-camera, they stare in disbelief, only to disappear in a series of jump cuts. Most of the images aren't of the Americans at all, but the natives and their fatal ritual. All the while, the dreamy music plays on. Especially comical is the boyfriend's hilariously impotent attempt at alarm: "That was really  shocking."

I can understand making this new culture the focus. The problem is how passive they are; we never get close to any of them. Throughout the movie, the point of view feels displaced: I can't relate to the natives, who are foreign; but I also can't relate to the Americans because they're swept under the rug. Sometimes they're in frame, but often are not. During the ritual, for example, the camera cuts and pulls away at all the wrong moments. We don't see the old woman leap; we see the heroine's face, but only for a second. Each time the camera jumps around, it misses a beat.

Conversely the village scenes are single takes that go on forever. Their focus is almost entirely the plethora of rituals being played out. At first, I watched, curious. Then I got bored, hoping for something to break the monotony of it all. When the revelations came, there was no payoff. So not only was my investment forfeit; the twists were confusing or lackluster. So was the gore—strange considering how realistic it was. As a gorehound, I was reminded how music and editing sell the shot; if someone played "Shock the Monkey" to the chest-burster scene in Alien (1979) and threw the imagery into a blender, that scene wouldn't probably wouldn't shock anyone, either. 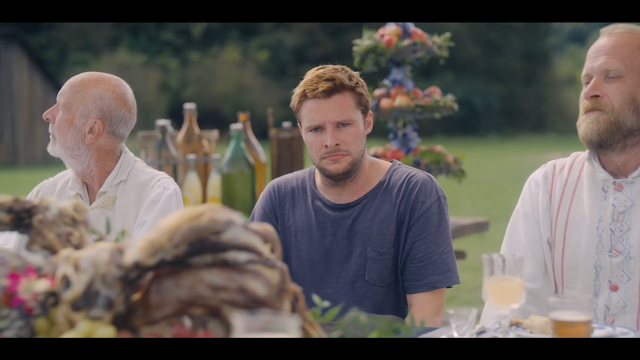 The biggest issue for me was being unsure of what the movie was trying to do. I didn't feel scared, I didn't feel interested; there were no mysteries to unravel, no surprises. Well, there was a little magic, but the special effects looked pretty made-for-TV; it (and the drugs) reduce the Americans to zombies. Except, they already kind of were. Sure, there's the opening set-up involving a lot of guy-talk about the jaded boyfriend getting off the fence. Much of this is never mentioned again, once they arrive. It just kind of stops.

To be fair, the heroine has nightmares; she cries, and doubts her surroundings. She's jealous. But she never gets to act on these feelings. Early on, she stumbles around, holding back tears. By the end of the movie, she's floundering in a dress, looking stoned and confused. She never gets to be a detective and overcome her underlying trauma. This pain just allows the villagers to exploit her, but they largely do it through rituals where nobody stands out. There's no central villain, and the village is too busy to act dangerous.

The movie didn't feel like a slasher. There's no "stalker" camera loping behind the unsuspecting. Everyone dies off-screen. The British couple get into trucks separately and are never seen from again. Except we don't even see them get into trucks; we're told they get into trucks. The talker friend (whose dialogue in the movie is beyond dumb) pees on a tree and is escorted away. We know what's going to happen; so does he ("I feel like that guy wants to kill me."). We never see him die, and later we see a villager wearing his face like a mask. It's hardly Silence of the Lambs. 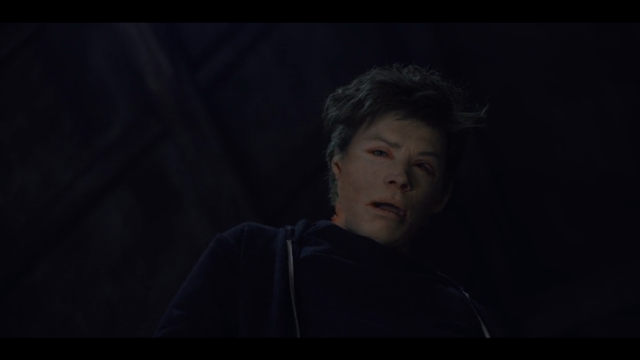 In terms of an active story to tell, almost nothing happens in this movie. It sabotages its suspense at every turn and forces the audience to stare and stare and stare. If the visuals changed at all, I might have at least enjoyed the scenery. Alas, ninety percent of it is the same green field, the same wooden houses, the same obscure dances, runes and pageantry. I've never contemplated pyromania while watching a movie, but this one broke me.

There is a protracted sex scene towards the end, but even this felt goofy. The boyfriend is drugged, and made to have sex with an eager maiden. Except, he was shown having been interested in her beforehand. It would have been much more unsettling if it were someone that repulsed him—sober or drugged. As he does the deed, an older woman comes up behind him to push on his ass with her hands. Not my thing, but not exactly the stuff of nightmares, either.

Meanwhile, the girlfriend peers through the keyhole from outside. The camera doesn't show us exactly what she sees but it doesn't matter. Looking through the keyhole, she would a man atop a woman, his butt facing the door. Her paranoia leads her to assume (correctly) that it's her boyfriend. I didn't feel sorry for him, or the girlfriend, and I felt like I should have. He's zonked out of his gourd, his expression blank; the girlfriend cries hysterically and is mobbed by a group of other women who ape her sobs. It felt incredibly odd, but also staged—literally another ritual written on the walls. 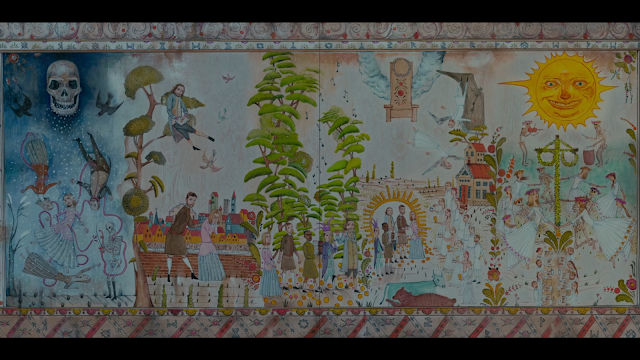 The movie ends with the boyfriend, now catatonic, being stuffed into a gutted bear’s body (for once, his blank expression says it all). He, his dead friends, and several local volunteers are burned inside a yellow hut. As the fire rages, the girlfriend looks on, grinning happily. Presumably she does so out of revenge even though he was under a love spell. I guess we're supposed to feel bad because she's manipulated, and the boyfriend, while not perfect, still gets it pretty rough. That doesn't matter, though. The whole point of annihilation is to destroy someone. In Midsommar, the victims are simply caricatures; their demise is spilt milk, but the director treats it seriously. For all the sympathy I felt at the end, he may as well have broken a chair and filmed it.
***
About me: My name is Nick van der Waard and I'm a Gothic ludologist. I primarily write reviews, Gothic analyses, and interviews. Because my main body of work is relatively vast, I've compiled it into a single compendium where I not only list my favorite works, I also summarize them. Check it out, here!
I'm an artist and a writer. If you're interested my work and are curious about illustrated or written commissions, please refer to my website for more information. If you want to contact me about a guest article, please use this contact form or reach out to me on Discord (vanderWaardart#5394)!