April 24, 2019
Commissioned by Marilyn Roxie for their website, Video Hook-Ups, I recently wrote a review for Sean Baker's Tangerine (2015).

Tangerine was shot on smart phones for $100,000 and tells the story of Sin-Dee. A trans sex worker released from jail, Sin-Dee expects her fiance/pimp, Chester, to be waiting for her. Instead, she's greeted by another trans woman, Alexandra. A close friend and fellow trans sex worker, Alex splits a pastry with Sin-Dee at the local donut shop; she also tells Sin-Dee that Chester hasn't been faithful. Sin-Dee is livid; she's only been inside for twenty-one days! Enraged, the scandalized bride-to-be marches off to learn the truth... 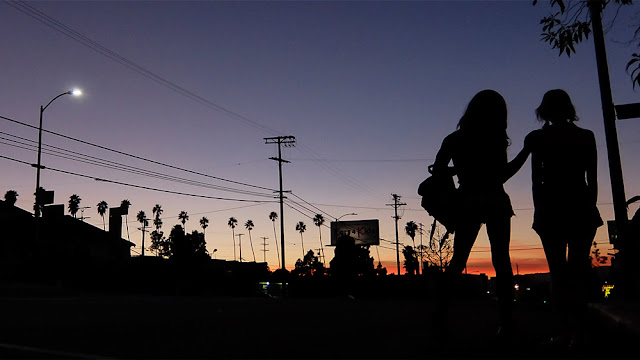 Below is an except from my review, which you can read in its entirety on Marilyn's website:

"I confess, if not for the gender variety the premise would be somewhat rote. Here, however, it isn’t tacked on or cheap. Much of the drama, comedy and action revolve around the fact that Sin-Dee is trans, and that many of the other characters are not. The contrast is vital. Sin-Dee is the heroine, but a tragic one: she’s a bit too feisty to merit the title “whore with a heart of gold,” and a bit too criminal to be seen as innocent or pure. All the same, the drama works; she merits pity without feeling preachy or demonic. Neither scapegoat nor stock, she simply is what she is. Here, we’re given a rare opportunity: to have a trans woman in a starring role that doesn’t feel pigeonholed."