April 07, 2019
Here is part two of my two-part article on how suspense functions in horror movies. Read part one, here.

As Michael Powell's unintentional swansong Peeping Tom (1960) demonstrates, content and context are not enough to supply horror movies with success. They must be marketed to the audience. Monsters and what monsters are about—these comment on exterior issues (serial killers, rape, etc) but also on themselves. Either commentary serves as a kind of discussion, one had by artists and the persons who patron them. Patronage occurs for many reasons. People might "comfort" themselves when they feel threatened (the "slasher" craze of the 1970s and '80s operating alongside the media's sensational treatment of actual serial killers).

Horror movies often express an awareness. In movies like Scream (1996), this can extend to characters who are horror "experts." Or, in not being experts, the uneducated and superstitious provide comic relief (Shaggy from Scooby Doo [1969] knows the legend; unlike Velma, he's scared by it). A third possibility is that the audience are experts, or some hybrid of the other two. In Summer of 84, the hero is a horror junkie and sleuth; his friends are not. The movie takes it a step further by examining 1980s consumer culture—as "horror canon" with a nostalgic slant. Though it, the 1980s not only become Gothic; their "horror factory" has a timestamp. What's more, this "stamp" can be replicated; such movies cite the monstrous past as routinely fabricated—of monsters and their violence evoked by current media tied to older versions. To this, newer iterations are designed to introduce their audience with older works as part of an on-going tradition. Those already aware can "look back" on such exhibits with familial warmth.

Imitation is commonplace, in horror movies. In a visual sense, however, such imitation is seldom perfect. Jimmy Steward, in Rear Window, holds on for dear life, his eyes bugging out of their sockets; so do Holly's, in Neil Marshall's The Descent (2005). The scenes are scarcely alike but united under a similar aim. As the fluency of the imagery passes from artist to audience, this can be parodied. By replicating the Gothic "craze" of the 1790s, Jane Austen's Northanger Abbey (1817) belittles (and celebrates) Catherine Morland's love for such stories. Austen copied scene and context, but with a wink. Should the conversation be full of jokes, the horror consumer will want to be privy. There's a tremendous sense of awareness and community that horror movies can foster—more than reason enough to love and appreciate them.

This doesn't stop Ebert from praising Hitchcock's skillful use of suspense. However, skill is more than simply being suspenseful; it extends to many different factors (mentioned above). Filmmakers of vastly different styles all examine the same overarching tradition: the exploration of common fears (or predicaments) through illustration—in new "environments," new media. These fears invoke similar images, illustrated by their tendency to return—not the killer, but the image of the killer. Does that mean a killer is near? No, only that a "killer" is routinely suggested, and recreated, in media. The skill in the director lies in recognizing these trends and tapping into them. Suspense was merely Hitchcock's marker, his claim-to-fame; there are many others.

More important than suspense is how Gothic media works to contain its symbols, its "monstrous" past. This evokes a continuous, varied dialogue that can, at times, be gross, scary or fun. It all depends on the maker, but also the audience and time period (and many other factors, besides). A common theme in Gothic stories is darkness—literally the Abyss, depicted as a symbol. Charlotte Dacre's Zofloya (1806) and Matthew Lewis' The Monk (1794) threaten their characters with dark, gaping voids. Such selection is pointed. Darkness collects in open graves (the sort written about by Renaissance "graveyard" poets); it also involves doorways, or aging ruins, be they naturally-occurring or stylized.

This is important. While darkness naturally occurs in Gothic stories, it is often linked to the supernatural (an over-stimulated imagination is frequently portrayed, in Gothic media). In other words, a house can age, and seem haunted; or it can be made to appear that way to accommodate a trend—a style, that in and of itself, is linked to a particular historical period. Like the "Gothic" buildings Beckford's Folly or Strawberry Hill, a movie, novel or videogame can serve as a capsule—for monsters, but also whatever darkness and fears are unique to them, as individual containers. Both what they are, and when they were made—these "signatures" repeatedly convey a unique sense of containment and expression, across the Gothic mode.

This includes the style of the maker. While Matthew Lewis and Ann Radcliffe were reputed for their Gothic novels, the style of each was radically different. Radcliffe abhorred the use of gore; Lewis made his bones with it. She used terror to imply the supernatural; he used horror to summon demons. Is one trashier than the other, when both are novels; or, are they two (well-written) sides of the same coin, contemporaries within an ongoing dialogue?

The same can be asked of suspense and surprise in cinema. As "action terms," suspense and surprise are used to describe what is happening from moment to moment, on-screen. In horror movies, this will inevitably involve terror and horror as Gothic devices. And while he wrongly equates suspense with elevation, I agree with Ebert in one respect: proper timing is important, in horror movies. Horror and terror should be appropriately timed, if one aims to elicit suspense and surprise. On the other hand, parody and camp play with such concepts to achieve comedic effect. It all depends on what the director wants.

There are other factors still. Horror cinema is notorious for prolific, numbered sequels. This seemingly inevitable trend demonstrates another problem: franchises. Are thrills cheaper by the dozen? Maybe. All the same, room remains for suspense and surprise, in horror franchises. Consider Alien and its sequel, Aliens—one is singular, patient; the other, a shooting gallery. However, both take their time (to the extent required to achieve their desired effect). As discussed in my video "Terror in Halloween (2018) and Other Movies," Aliens chooses to hide the monster after it has already been revealed—in the movie, and upon the palimpsest (the xenomorph had already been given away in Alien); it also features protracted action scenes Alien had none of.

In terms of action, Scott and Cameron's styles are radically different; the same symbols, characters and situations are infused by them with fears and concerns from their own time periods. Made in 1986, Aliens' story is told inside a shared universe (albeit one tinged with Vietnam war allegories). Cameron's story explores the harmful effects of neoliberal ("corporate") colonialism; Scott's movie is a vehicle for the working class told against a Lovecraftian backdrop. In either case, there is terror and horror, as well as surprise and suspense. Both movies explore fear as an expression, per artistic traditions recent (cinema) and aged (the Gothic mode).

While either builds up to a grand reveal, neither treats their suspense or surprise as constant, like Hitchcock. Instead, theirs is a Gothic delivery. At times, it is suspenseful; others, shocking. A man with a knife in the same room—that's suspense. The man revealed to be safe (or as a monster, imitating a man)—that's shock. Both are used in a Gothic situation where surprise and shock serve as horror and terror devices. They affect. However, Gothic affect, or atmosphere, is nebulous, a depiction of danger and menace stored on the walls. With the possible exception of Psycho (1960), Hitchcock seldom employed Gothic affect the same way as Cameron or Scott. 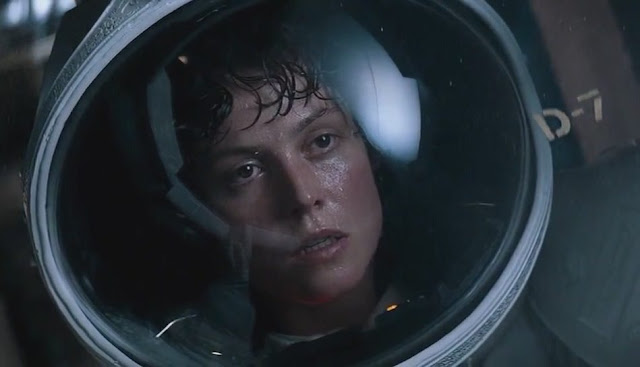 It doesn't really matter. Yes, Rear Window is a classic, in the eyes of many. So are Alien and its sequel, which dive into the "cheap thrills" Hitchcock stubbornly left out (according to Ebert). All three sold tickets, but Alien and Aliens did it by working with low budgets and pejorative labels. Their different approaches show that suspense is important in horror movies; it's just not the end-all-be-all. They also belong to the Gothic mode, exploring public fascinations with violence, of terror and horror in the media. Told through varying styles, "success" (and proliferation as art) has less to do with suspense all on its own; it combines with a glut of synchronized factors: horror and terror, shock and surprise, parody and pastiche, time and space. These operate regardless of the labels applied—before, during and after.

To quote Ludwig Wittgenstein, "naming is a preparation for describing [...] with the mere naming of a thing, nothing has yet been done." Although suspense can determine how horror movies come to be labeled, the term "elevated" should be chucked in the bin; horror movies will continue being made, using suspense and surprise to varying degrees. With or without labels, they will exist as they are, something to describe, consume and enjoy. No elevation required.